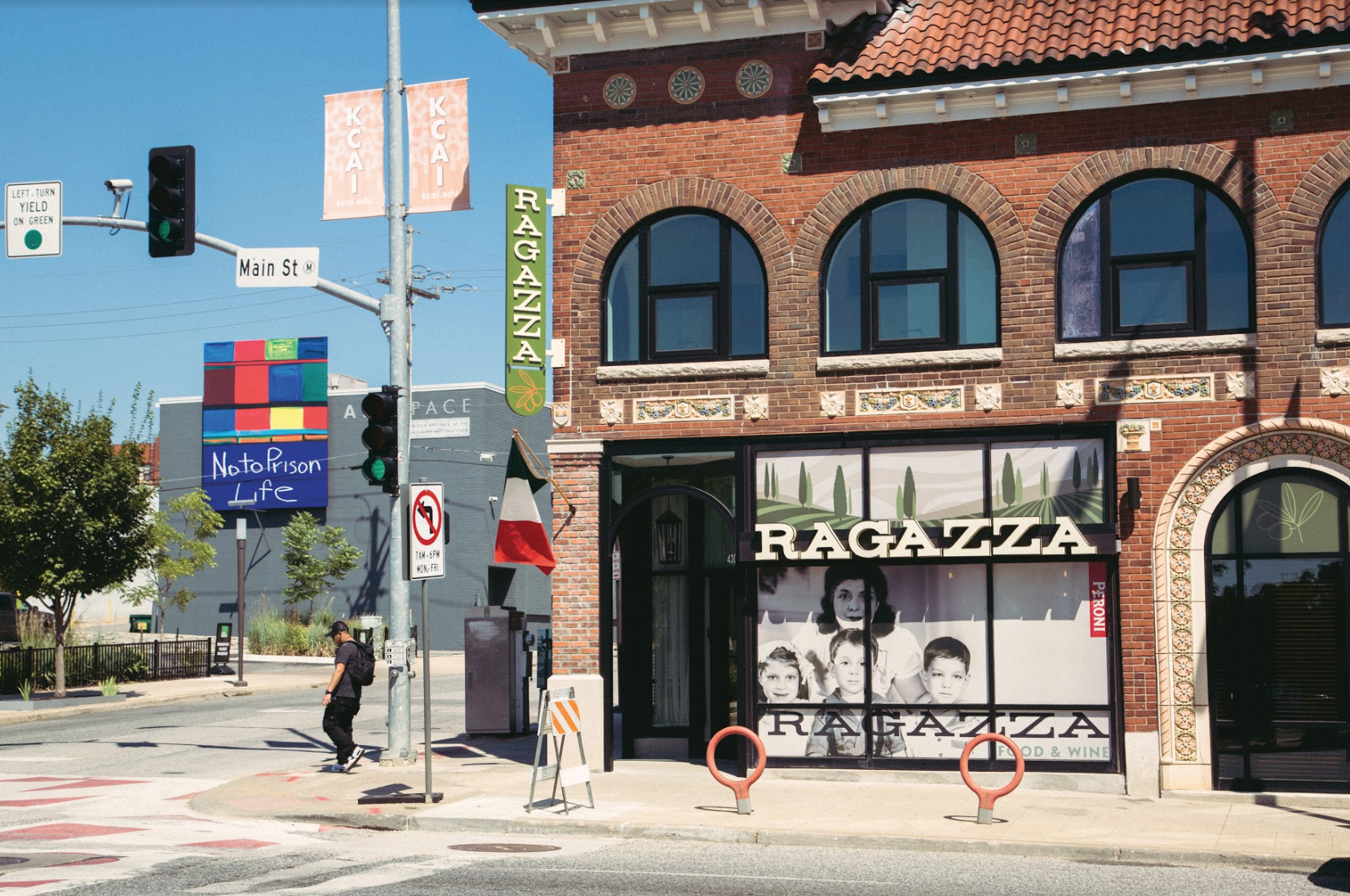 No one wants to listen to a restaurant critic complain about her job. But if there’s a drawback to this gig, it’s that even when I love a place, I rarely get to return. By the time I’ve signed the receipt, I’m already thinking about the next assignment. So I was eager to make rare repeat reservations at two beloved neighborhood restaurants—Ragazza and Plate—that recently reopened in new locations. Both restaurants focus on Italian food, but they couldn’t be more different. Ragazza has always felt like a familial Tuscan trattoria; Plate like a haute ristorante in Milan. I wanted to see how the two had reinvented themselves in bigger, brassier spaces. In a distended dining scene full of people chasing the new, I struck out looking for something else: a reason to return.

Laura Norris’s Cucina della Ragazza was begging for an expansion almost as soon as it opened in 2014. This March, snagging a table became a little easier: Norris reopened the restaurant in a roomier location as “Ragazza Food & Wine.”

The new building is only a few blocks from the old, on a corner in Southmoreland that once housed Nature’s Own. But the restaurant seems to have traveled a long way from its beginnings as a cozy Westport hideaway. It has expanded, for starters, from 30 seats to almost 100. The décor has stayed true to a “refined rustic” vibe—muted colors, maps of Italy, kitschy wine-cork mobiles. But when Ragazza is packed (and it’s usually packed), the restaurant can seem downright rowdy. Intimate and quiet it ain’t.

One contributing factor: the expanded cocktail list, which favors the sweet and slurpable. My pick of the list is the lemon drop martini, a Mike’s Hard Lemonade that spent a semester abroad. The cocktail blends Ragazza’s housemade limoncello with citrus vodka, lemonade, and basil. It’s the kind of soft, sunny drink that makes you nostalgic for sticky summers while you’re still in them. 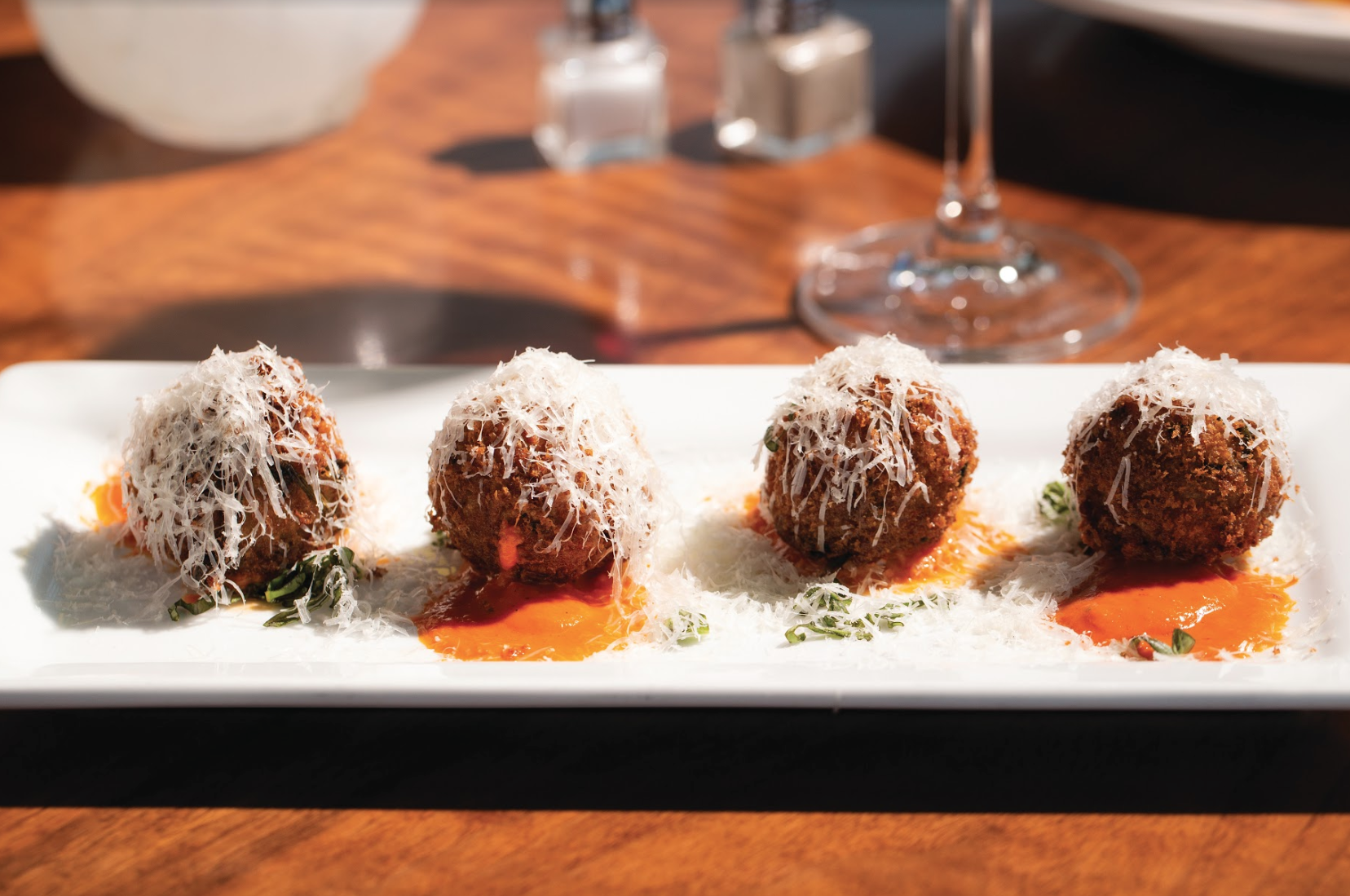 The dinner menu has expanded, too, in the care of new executive chef James Landis. Ragazza’s food has grown livelier and more inventive without sacrificing familiar comforts. The giant meatball’s still on the menu, as is Norris’s beloved lasagna Bolognese. But Landis has rounded out the traditional menu with creative starters and entrees likely to attract new fans.

I was underwhelmed by a starter of roasted goat cheese and tomato sauce, which never quite cohered into something greater than the sum of its parts. But I was pleasantly surprised by a basket of chewy, well-structured focaccia served with an aromatic (and compulsory) black pepper butter.

My favorite from the “spuntino” menu (think: snacks) were the arancini: fried balls of creamy rice flecked with spinach and stuffed with provolone cheese. The delicate orbs had a satisfyingly crunchy crust and gooey innards the inky color of a mushroom bisque. That color came courtesy of porcini mushrooms, which lent the dish a super-concentrated mushroom flavor.

To eat well at Ragazza, look beyond the classic pastas. The spaghetti cacio e pepe was oversalted, nudging the simple flavors out of balance. I preferred the bucatini all’Amatriciana, which lifted the salty pancetta with a teasing nip of crushed red pepper. Still, it wasn’t engaging enough to hold my attention through the bowl. 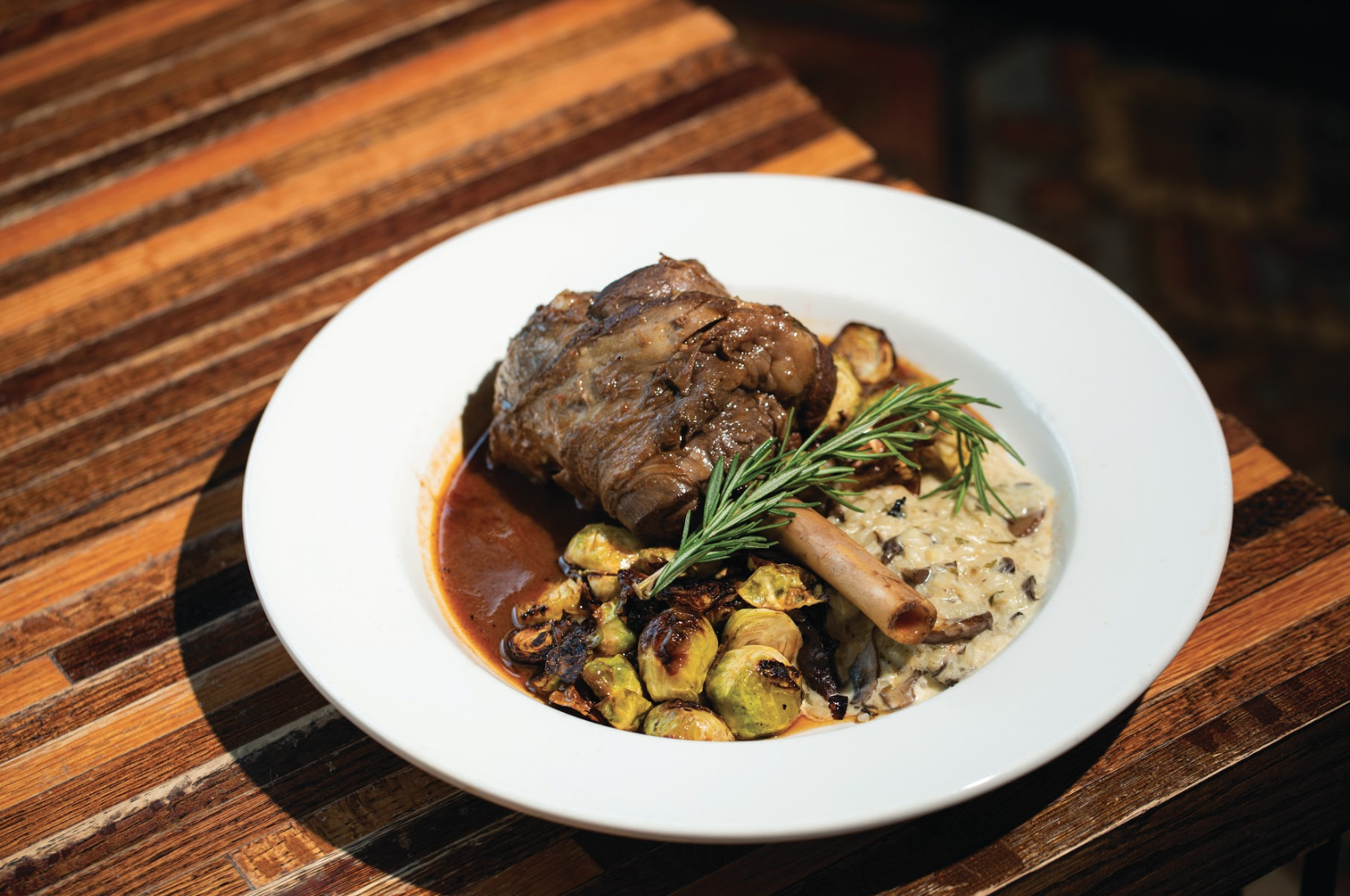 Order the braised lamb shank instead. When I tried, it, the lamb was plated with doll-sized Brussels sprouts and a mushroom risotto so sloppy with cheese and butter and salt that I became convinced Landis had discovered a fifth state of matter. This risotto has ruined me for all others, like a lover in a dime-store romance. I was so infatuated, I almost forgot about the braised lamb—but it, too, was suspiciously good, the meat mild and tender and sweet as a lullaby.

Also excellent: a plate of creamy polenta, swimming in broth and dressed with plump, juicy shrimp and husky bites of Italian sausage. Ditto a rich ramekin of chocolate budino, which had a dense, almost fudge-y texture and an astringent cocoa flavor.

Ragazza seems to have become a theater bar as much as a neighborhood haunt. On any given night, you might see a half dozen local actors drinking and cajoling and picking through their pasta puttanesca. Sometimes, they’re your servers. (I scored local diva Shon Ruffin on one visit—she was, as she is in all things, excellent.)

I consider that a testament to Norris’s lively, inclusive brand of hospitality. The original Ragazza felt like home. The new Ragazza feels like a house party. Either way, you’re in the company of friends.

Best bet: Swig a lemon drop martini and nibble on the arancini as an app. Splurge on your entrée—braised lamb with mushroom risotto. 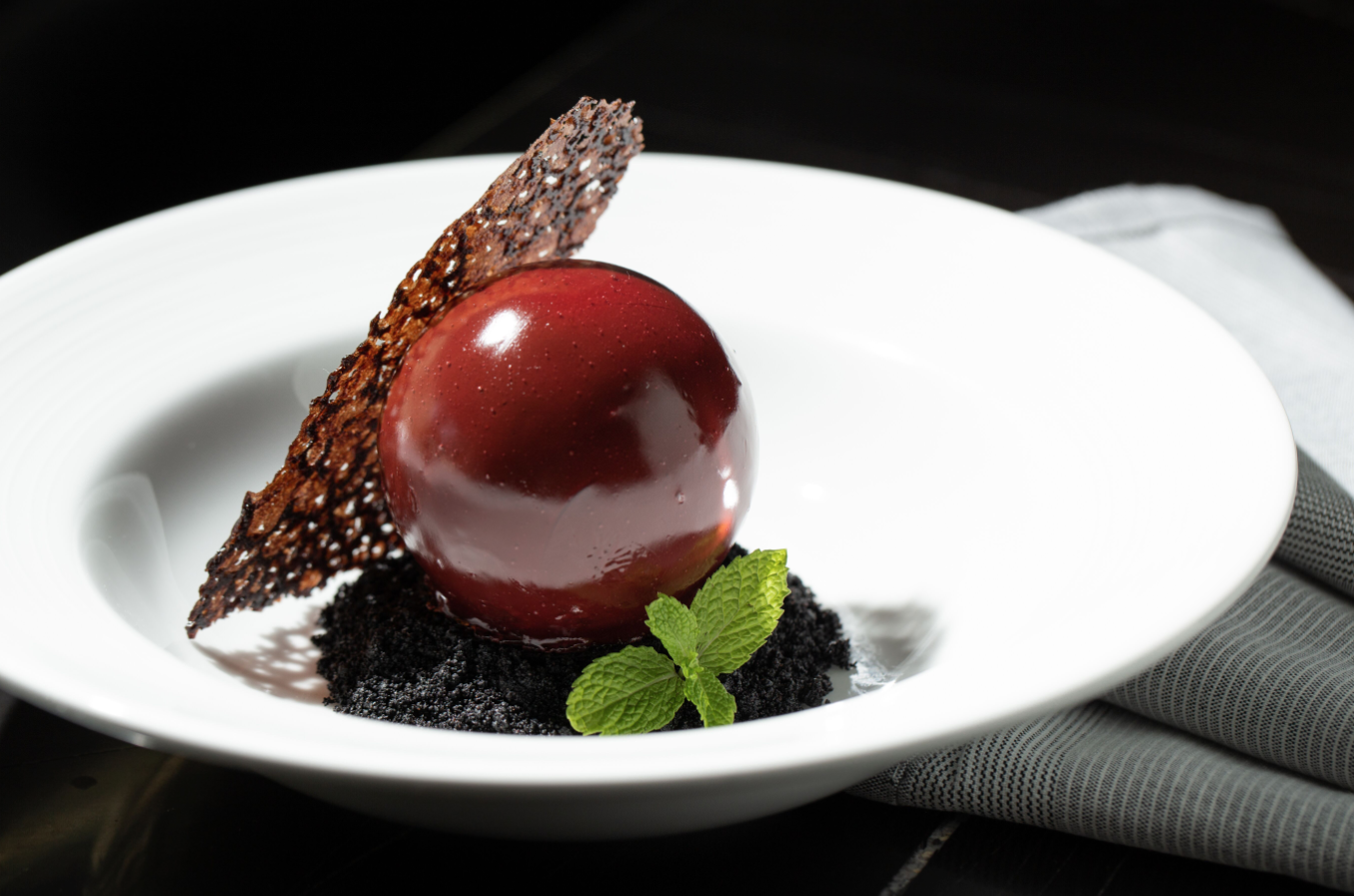 Christian and Andrea Joseph’s restaurant Plate had already become a fixture in east Brookside when a fire lashed through the building in 2017. Two years later, the restaurant has finally reopened in a new east Brookside space once home to the health center of a chiropractic college.

At Plate 2.0, the Josephs have ramped up the square footage and more than doubled the seats. The resulting vibe is a little less cozy and a little more Tron: black tables, black tiles, black chairs, spit-shined concrete floors. Black-clad servers lightcycle through the dining room beneath cold, modern lighting and ceiling-mounted electronic screens.

One crucial consistency: executive chef Brian Mehl, whose inventive pastas and stylish plating made the original Plate a neighborhood hit. I don’t know what Mehl did during his two-year hiatus—transcendental meditation, peyote in a pup tent—but he seems to have emerged with an even sharper focus and feel for what he does best. The new Plate leans more confidently into the second half of the restaurant’s tagline: “Italiano Moderno.”

When I reviewed Plate’s first permutation, I quibbled a bit with the portions and the prices. This time around, Mehl has beefed up the former, offering heartier portions of his excellent scratch pastas. (The prices are still firmly in Special Occasion territory for me, but the pastas are worth celebrating).

I enjoyed the spaghetti alla bottarga, which married seaweed-speckled spaghetti with bottarga—savory, almost Parmesan-esque roe—and a moat of fragrant saffron oil. But my favorite dish was a plate of rabbit-stuffed cappellacci. The dumplings were enormous, a flap of chewy pasta curling suggestively from each center like a tongue. Topping each purse was a thin slice of black truffle, grooved with tiny striae like a circuit board. 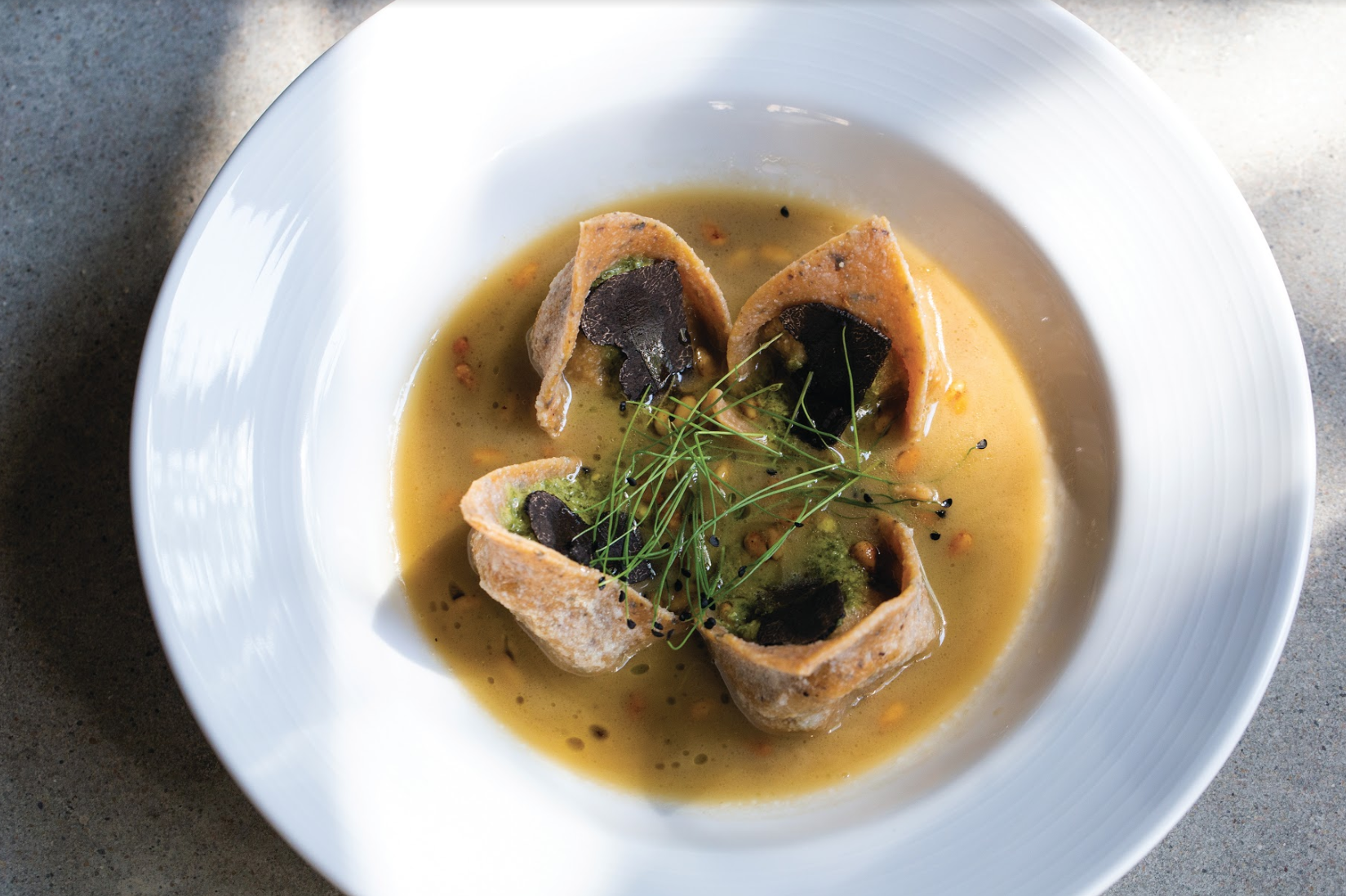 The Bone & Hare tugs Plate’s diners through a progressive symphony of flavors. // Photo by Zach Bauman.

Eating the cappellacci was an almost synesthetic experience—a reminder that a great dish can have movements like a sonata. I took a bite: the fresh, peppery-y flavor of the pasta quickly yielded to the rich, salty tang of the braised rabbit before plunging headlong into the warm spices of the bone marrow broth. Then came the truffle—musky, heady—followed by a dot of carrot-top pesto with an herby, vegetal pulse.

I loved that dish so much, I was ready to ignore its odd moniker—“Bone & The Hare.” Most of the plates here carry cutesy, if occasionally confusing, names. A dish of agnolotti with ricotta and prawns was labeled “That Shrimp Cray.” A luscious plate of duck breast and pickled butter beans made me order it with a question: “Mallard? Duck? Anatra?” 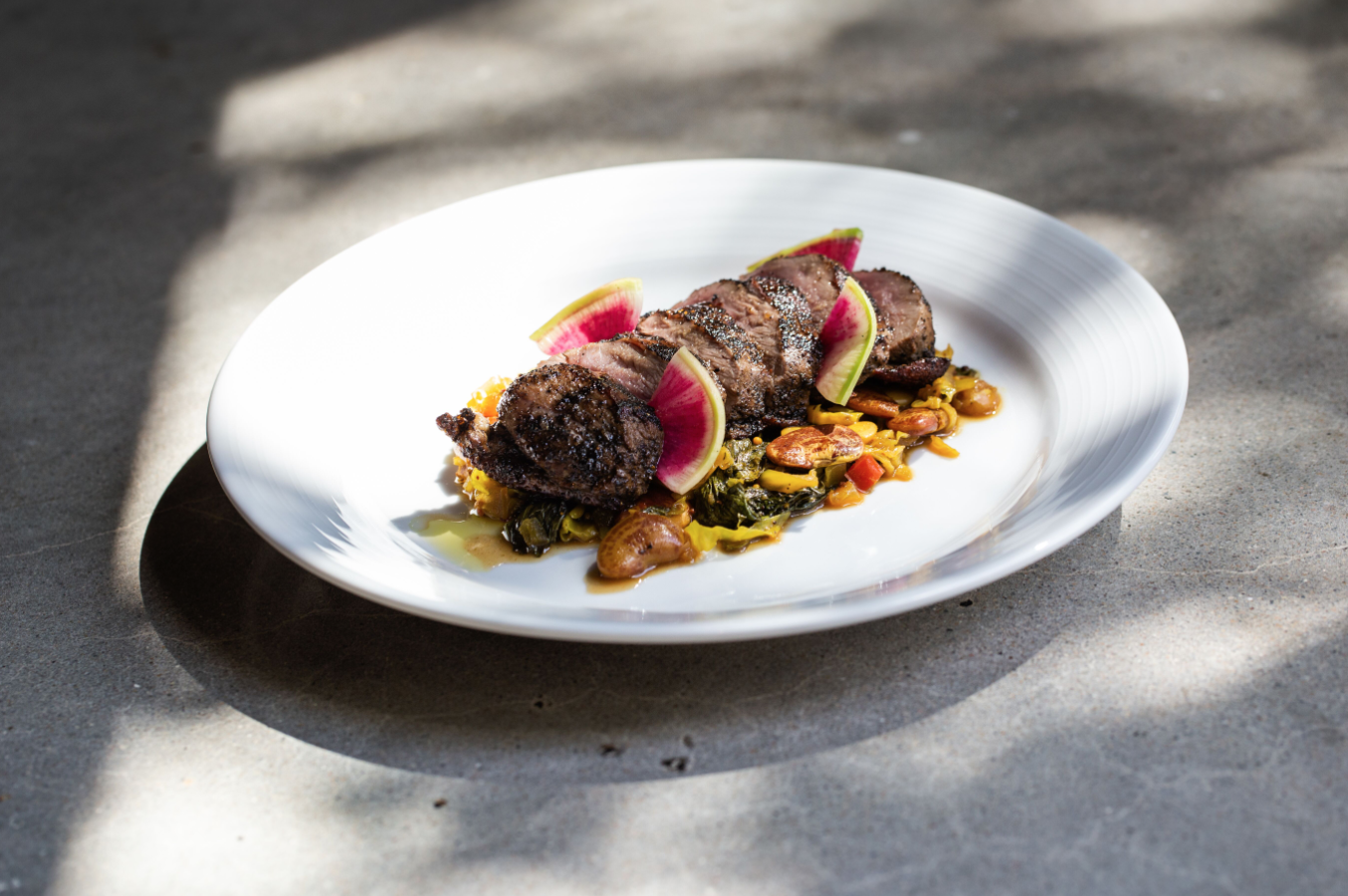 I said “no” out loud when I read the name of the coconut panna cotta—“Roseanne Pannadana.” (That dish also turned out to be a rare exercise in overcomplication. A busy plate creates a kind of tension—stretch it too far and it snaps).

Still, the impulse is admirable. The staff at Plate seem determined not to take themselves too seriously. Service here is professional but colloquial; on a recent visit, a couple front-of-house employees happily joined my table to mock a man slowly circling the block in a candy-red Ferrari like he was showing a calf at the fair.

Even when the food gets fussy, it retains a sense of humor. Take the “Cioccolato”: a glossy chocolate sphere the size of a Christmas ornament plated on a bed of devil’s food crumbs. The dessert arrived with a side of theatrics. Our server gave the top of the sphere a swift crack with the bowl of a spoon, then sliced it cleanly into two halves so we could marvel at the fossil record. Layers of decadent chocolate mousse surrounded a dense, concentrated core of raspberry gel. The whole thing felt a bit precious, until I scooped up a soil-y mouthful of crumbs.

Kansas City isn’t short on checkered tablecloths and red-sauce Italian Americana. But Plate is offering diners something different—creative, energetic dishes dreamed up by a chef with a broader vision of what Italian food can be.

Best bet: Tour the menu by splitting the “Bone & the Hare” (rabbit-filled pasta dumplings) and the “Mallard? Duck? Anatra?” (duck breast and butter bean chow-chow) with a date. Show off with the Cioccolato for dessert.