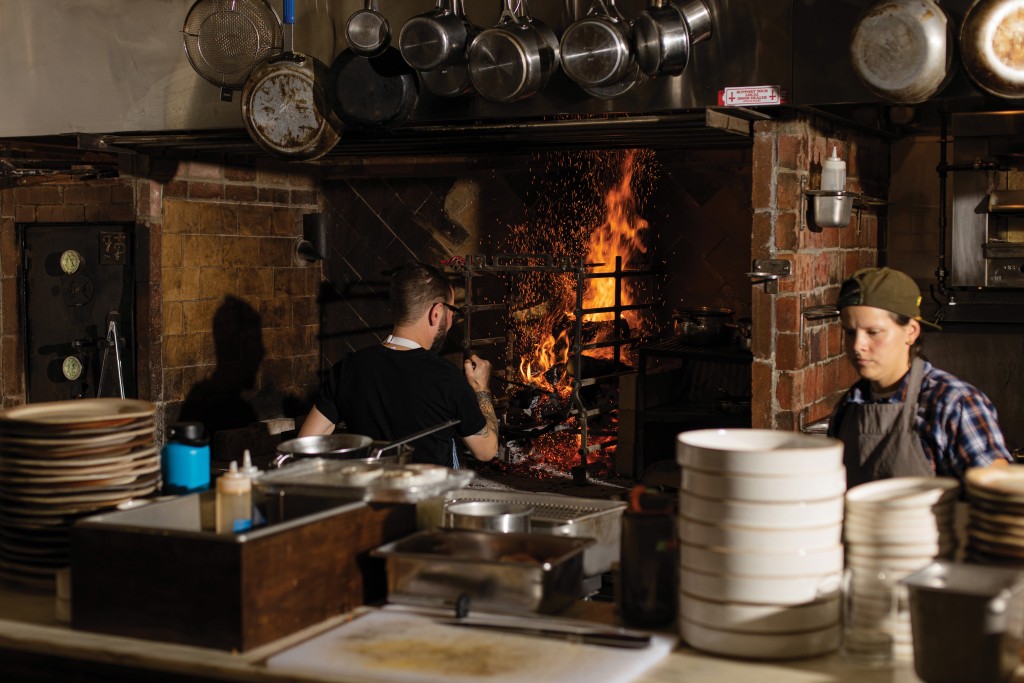 Restaurant margins are always tight; this business has few safe bets. But if I were a betting woman, I’d bet on the success of Fox and Pearl, the new(ish) Westside restaurant helmed by Kristine Hull and chef Vaughn Good. Sure, the restaurant has great marketing and photo-friendly design and lots of influential fans. But its cozy-luxe style of cuisine also feels ideally calibrated for KC diners right now.

Good’s menu is highly meat- and smoke-centric (most dishes are cooked on a wood-fired hearth), and while most everything’s local and seasonal, few dishes feel offbeat or ostentatiously “chef-y.”

In some restaurants, the pan-seared bologna ($15) would be a high-low wink drowning in self-conscious flourishes. Here, it’s an affectionate menu staple. There’s a housemade “yella mustard” with an astringent, primal burn. There’s a candied jalapeno cream cheese that leans into both sweet and heat with hedonistic joy. There’s the bologna itself—thick-sliced and rust-browned, twinkling with fat like confetti in a snowglobe. 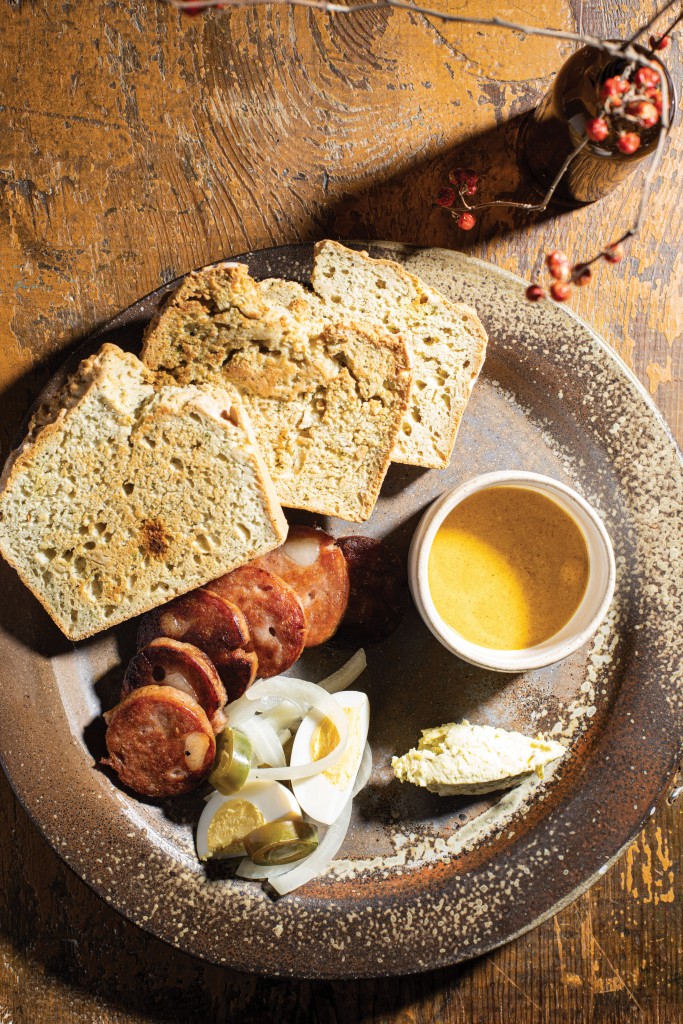 The pan-seared bologna shares a plate with pickled egg and thick slices of buttermilk-dill bread. // Photo by Zach Bauman.

That’s a vibe Good began to perfect at Lawrence’s Hank Charcuterie, a butcher shop and restaurant he operated from 2014 to 2018. I loved Hank and had high hopes for Good’s next act in KC. But he and Hull didn’t rush the transition. They opened provisionally in the quaint-crowded old Novel space on 17th Street while the buildout of their final Summit Street destination was underway.

The new space debuted in July, and that patience—and Hull’s enviable eye for design—paid off. Fox and Pearl is easily the most beautiful restaurant to open in Kansas City in the last year. At night, it’s sleek and romantic—shocks of neon glint off the old grid windows while man-sized plants flank banquettes like bodyguards. During brunch, daylight pours in with a cold, stately elegance, energizing the dark wood tables and cozy brick hearth. In the secluded basement lounge, white Christmas lights zag around bar shelves and low candles flicker with each bark of laughter or hiss of a record player spinning The Clash.

Service here is prompt and easygoing. I’ve noticed a growing trend of servers pouncing on you with questions—“HOW IS THAT FIRST BITE TASTING?”—as soon as you pick up a fork. But Fox and Pearl’s sharp servers have, for the most part, mastered the art of popping up when you need them and vanishing like Homer Simpson into the hedge when you don’t.

The menu is divided into small and large plates, and both sections are stacked with housemade terrines, pâtés, and sausages. For a light meal, snack on the smoked chorizo ($9), a plump and soft-textured link with a snappy skin and an assertive back-up dancer: spicy pickled cauliflower.

The potted cheese ($11), one of a few meatless plates, was a sleeper hit with the veiny sharpness of blue cheese and the pimento hue of a holiday cheese ball. The buttery, roasted garlic crackers reminded me vaguely of Chicken in a Biscuit. This is not a diss. 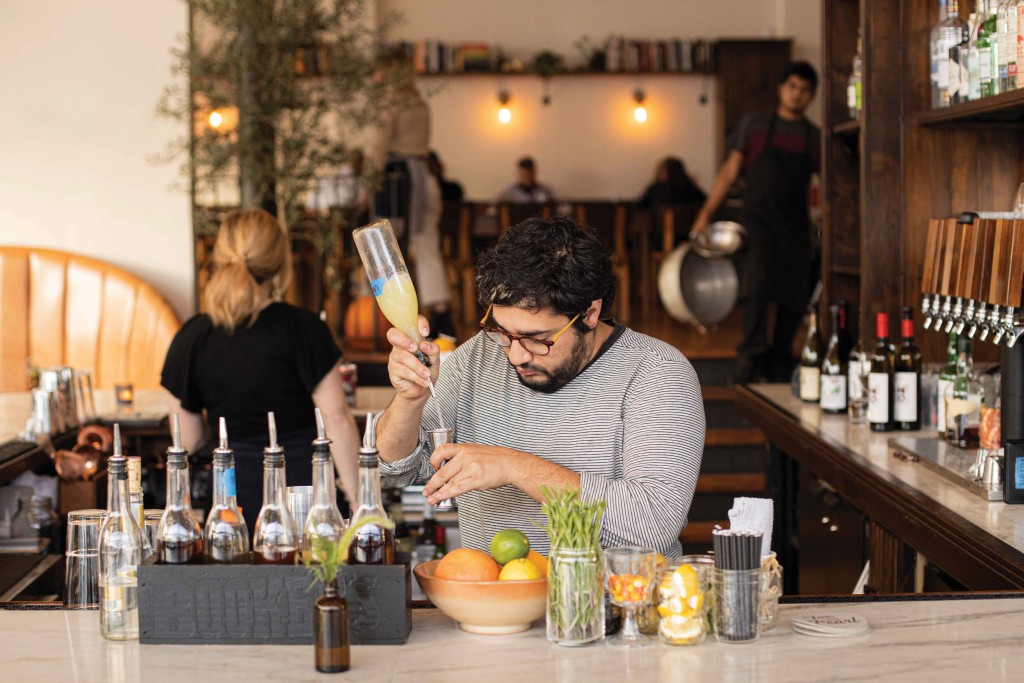 Those small plates feel designed for happy-hour grazing alongside one of bar manager Katy Wade’s cocktails. On my visits, the cocktail menu had something for every taste, from the easy-drinking Autumn Sweater ($11), which tasted like the sweet, cider-spiced victory of French-tucking a cable knit into your skinny jeans (fashion people: how?) to the Not That Kind of Witch ($12), which blended Linie aquavit, Strega, and Campari. The latter was challenging, abrasive, bitter, syrupy. It bossed me around and made fun of my shoes. I loved it.

Still, my favorite cocktail was the Give Me The Beet Boys ($11), a drink that deserves the “food-friendly” label typically reserved for wine. Beet-infused mezcal and aromatic byrrh complemented Good’s smoky, earthy cooking, while grapefruit and Cinderblock French cider crisped up the drink.

At dinner, there’s reason to look beyond the meats and order one of the pastas. I liked the tortelli con la coda ($16)—ricotta-filled noodles shaped like turkey necks. The pasta was perfectly chewy, swathed in a dreamy butternut squash sauce with sage and smoked hen-of-the-woods mushrooms. This dish was Thanksgiving in a bowl. 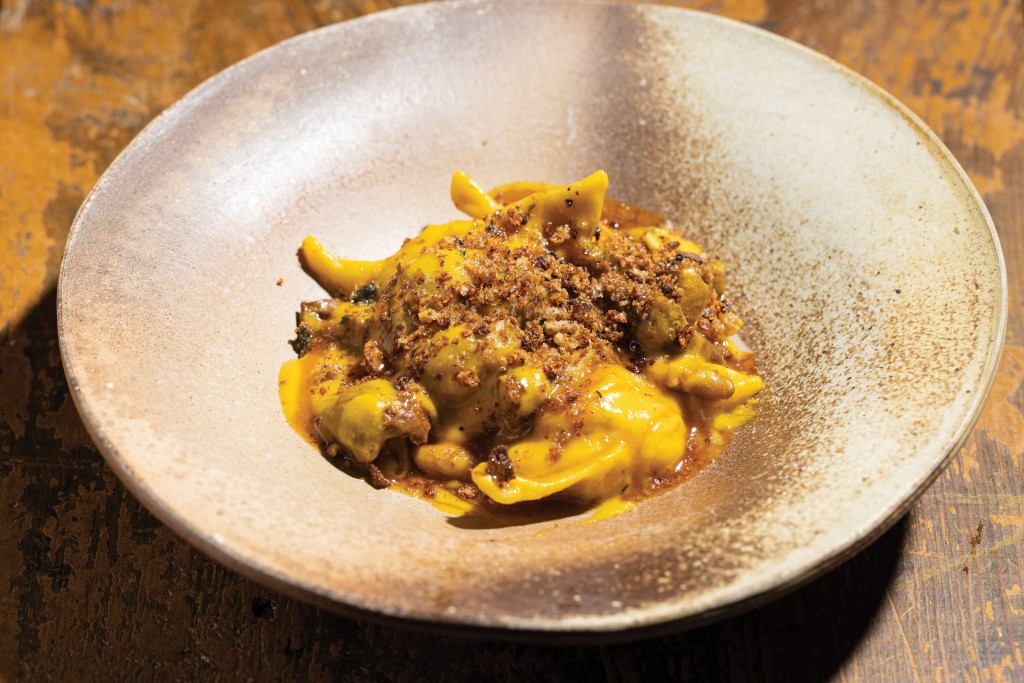 Sunday brunch offers a less expensive way to sample Good’s food and a good excuse to order the excellent Creole BBQ Bloody Mary ($9), which has a thin and garden-fresh mix. Brunch is also your only chance to sample the excellent, pillowy-soft ricotta fritters ($6; cinnamon-sugar donut holes that went to college) or the smoked beef belly pastrami ($14), which balances fatty-crisp morsels of meat with acid sparks of wee pickled peppers.

If you’re fighting a hangover (or training for a marathon), order the braised pork burrito ($12), which packs an enormous chewy, toasted tortilla with pig and potato and white beans, then crowns it with a sunny egg. Pickled onions lighten this otherwise heavy dish; hunks of potato are crisp-fried so they never get sogged and sad. The arbol salsa that comes standard is good, but you’ll want a side of the house-fermented hot sauce ($1). Though the sauce changes semi-frequently, both of the varieties I tried on my visits were bright and complex.

Sometimes the menu’s simplicity backfires. The cornmeal pancakes ($12) on the brunch menu tasted flat by comparison, the grilled ham and apple compote too mild to seem exciting. And the burger ($14) on the dinner menu was grilled to order but bluntly salty, the Hemme Brothers Creamery cheddar pasted too thick for the other flavors (caramelized onion, stone-ground mustard) to come through.

At other times, attempts to complicate the dishes feel underdetermined. I adored the smoked pork terrine ($9) on its own but was confused by its presentation. The lightly crusted slice was draped over a buttermilk biscuit like a torch singer on a piano, another biscuit half-propped on one elbow nearby. I didn’t know what to do with all that biscuit. Was I supposed to eat it like a sandwich? You can add an egg for an upcharge if you want to smother the terrine’s subtler flavors—but why?

I was foiled again by my old enemy, Unnecessary Egg, with a small plate of seared foie gras ($18). The surprisingly loose foie arrived crowned with a runny quail egg. The result was unctuous-on-unctuous, but all I tasted was the egg. 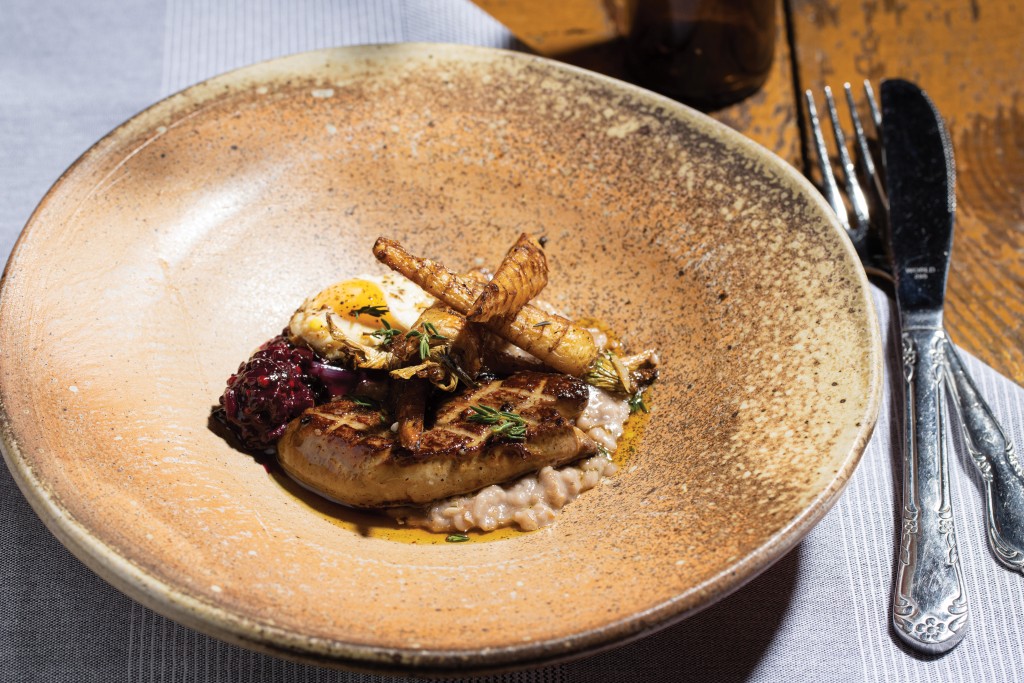 Most of the menu items feel more confident—like the great porchetta ($27, sadly now cribbed from the menu) which married alternately crisp-edged and butter-soft pork belly with lean and juicy loin. This is Aspirational Pork. Pork chops have posters of this porchetta in their dorm rooms.

Another menu celebrity: the rabbit pot pie ($25). I was lukewarm about this dish when I tried an earlier version at Hank, but there’s nothing lukewarm about it now: the pie’s thick, savory filling is beautiful and smoky and hearty and Jesus Christ, volcanically hot. Saw into the shiny, honey-butter crust early to let the steam escape. Your patience will be rewarded with glossy rabbit and mouthwateringly smoky cubes of ham.

For Kansas City’s upscale restaurant scene to thrive, it’s going to need standard bearers for both the out-there, Technicolor tasting menu and the nose-to-tail, Cowtown cuisine. Fox and Pearl is a strong contender for the latter. Good does what he does with masterful technique, and he’s surrounded himself with people—in the kitchen, behind the bar—who do the same.

Vegetarians and thrill-seekers might not find much to tempt them at Fox and Pearl. But I can’t think of a restaurant more likely to convince food-fuss skeptics of the merits of fine dining. 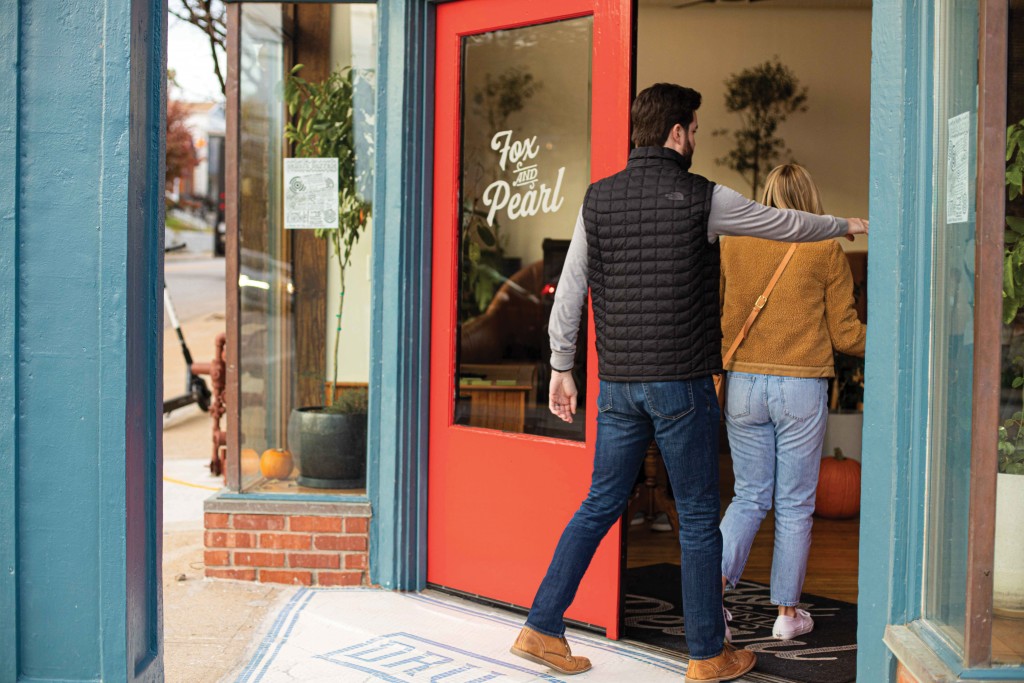 Sip a Give Me the Beet Boys and pick over some potted cheese and pan-seared bologna. Still hungry? Order the rabbit pot pie.