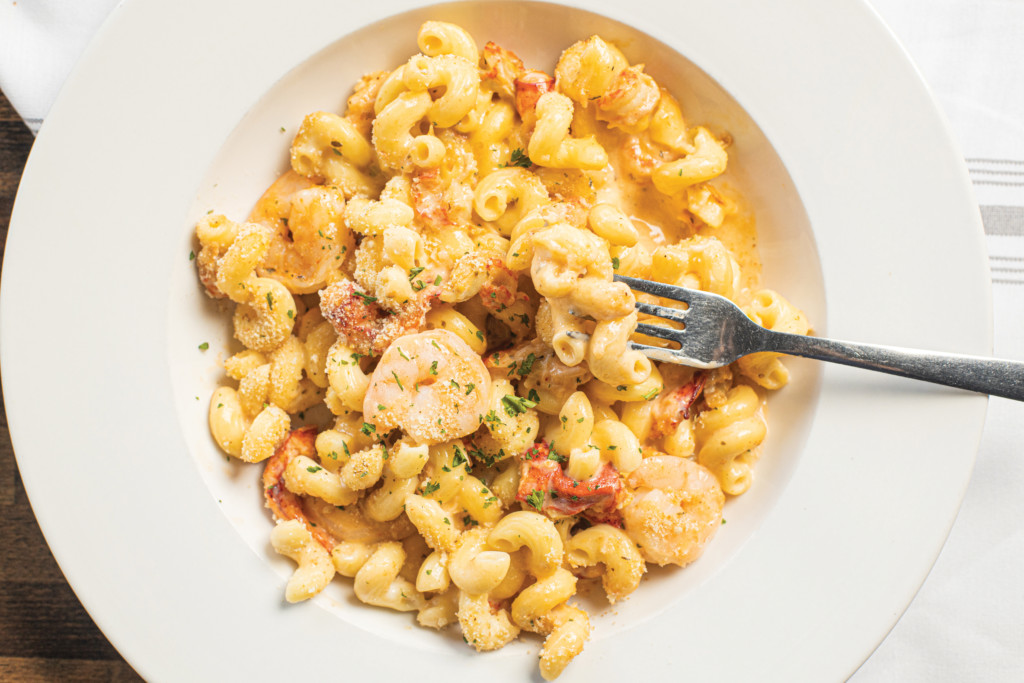 The pianist was bored. His wide-brimmed hat bobbed in time with the music as he peered around the restaurant, looking everywhere but the keys. Every other eye in Soirée Steak and Oyster House was on vocalist Paula Sanders, who was scat-singing over a strolling bass line with a voice like whipped butter. The pianist’s hands seemed to float across the keys, summoning splashy chords and intricate noodling from another plane, anywhere but here.

It takes a lot of effort to look that effortless. The musicians at Soirée Steak and Oyster House have mastered the trick. The restaurant employees could use a few more rehearsals.

The six-month-old restaurant is full of good ideas and bright talents. Chef Anita Moore opened the original Soirée in Smithville in 2017 and quickly caught the eye of Kansas City developers who lured her to 18th and Vine. Where the Smithville restaurant focused on New Orleans cuisine, Soirée Steak and Oyster House pays more attention to the experience of dining: live jazz, stiff drinks, good vibes. Moore has brought along a few of those Cajun-inflected items—blackened chicken, shrimp po’boys—but there are more classic steakhouse options, too.

The restaurant occupies a prime corner lot at the western gateway to 18th and Vine that once housed The Peachtree. The remodeled dining room is undeniably beautiful—sleek concrete floors, bold red accents, firework colors arcing from large-scale paintings of jazz greats. At night, the warm neon lights of 18th and Vine twinkle festively through plate-glass windows. The acoustics are ideal, too: You can hold a conversation even as glasses clink and cocktail shakers rattle and drums sizzle and pop like fat on a fire. 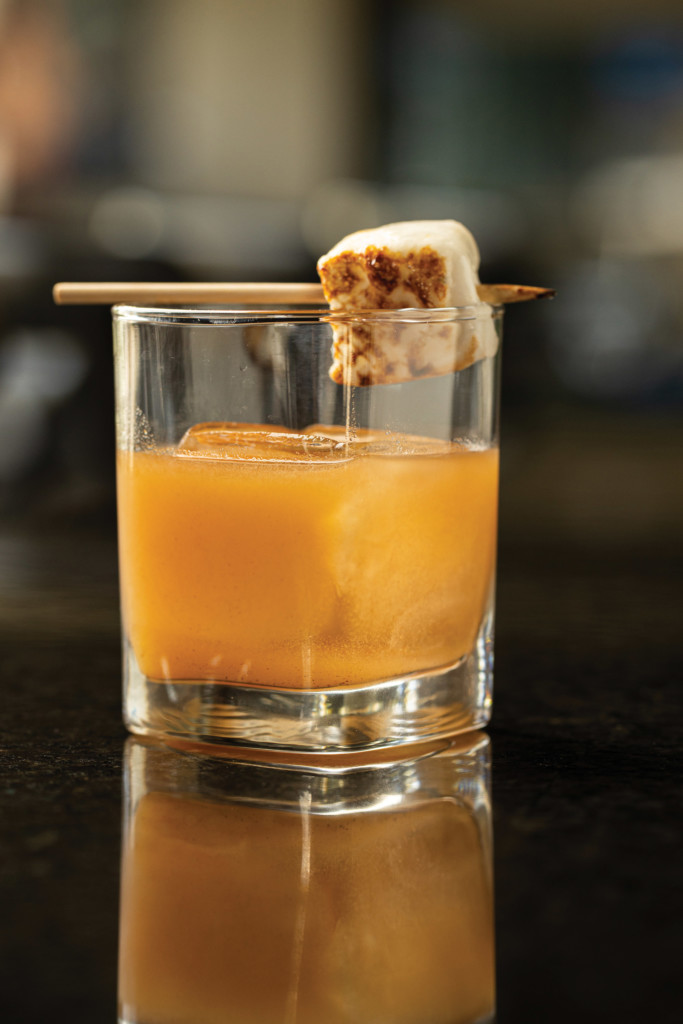 For an easy-drinking cocktail, try the Jazz Crush ($9), a sweet but not syrupy mash of bourbon and citrus poured over crushed ice into a sunrise gradient, color fading from a blazing crimson to a pale sherbet orange. My favorite from the list was the Slap Yo’ Daddy ($12), a stiff blend of Rittenhouse rye and caramel-toned sweet potato syrup. The garnish—a sticky and attractively brûléed housemade marshmallow—was half the fun.

You can have a great night out here just sipping drinks and steeping in the air of more stylish people. On one visit, I watched a well-known community development executive kick off her patent-leather slingbacks and flex pantyhose-veiled toes in time with the music. Another night, I was seated next to Tech N9ne, who was looking less like a rap star and more like the guest of honor at a black-tie luau.

But for a restaurant with steak and oysters in its name, Soiree Steak and Oyster House isn’t yet giving either of those foods the marquee treatment.

Diners can choose one of three preparations for oysters—raw, chargrilled, or fried—and each phase of matter has its boons. I was surprised, though, to discover there was only one oyster variety when I ordered my first half-dozen raw ($9). Our server couldn’t tell us what they were. When she returned from a trip to the kitchen to ask the chef, she offered only that they were “from the East Coast.”

Those East Coast boys were large, briny, and meaty. They were fresh enough that I didn’t need the “pickled watermelon mignonette” the menu alluded to—which was good, because it never arrived. 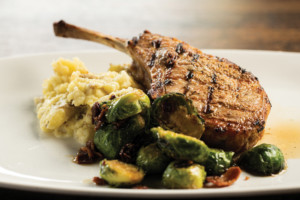 The smoked bone-in pork chop is crisscrossed with grill marks and propped up by Mount Mash. // Photo by Zach Bauman

I’ve had some great meals here, like the quietly brilliant seafood mac and cheese ($22) with generous hunks of lobster and shrimp and a slinky, briny sauce delicate enough to let them shine. Or a plate of chargrilled oysters ($12) drunk on herb butter, their shells scorched ink-black with a primal perfume that wove its way into my hair the second I raised them to my lips.

But I’ve also had expensive disappointments. The “blackened chicken breast” in the creole chicken and shrimp ($27) was dry with flabby skin, and the green beans were still crunchy (the shrimp, at least, were luscious and tender). The 14-ounce ribeye ($32) could have been in a commercial: it was cross-hatched with grill marks and slick-shined with butter. But I ordered the steak medium rare, and it arrived a chewy medium well. I focused my attention on the mound of rustic-textured mashed potatoes instead, which were garlicky and well-seasoned.

The 14-ounce smoked Duroc pork chop ($28) was again overcooked to a chalky texture, though it, too, was a showpiece. The bone-in chop was the size of a shoe, striped with carbon and propped proudly against a mountain of smoked sweet potatoes soaking in a bourbon brown sugar glaze.

The appetizers are more consistent. The crab cakes ($15) are exactly what you want them to be: all lump crab, no filler. The meat is sweet and soft and needs nothing beyond the zippy remoulade smeared attractively on the plate. 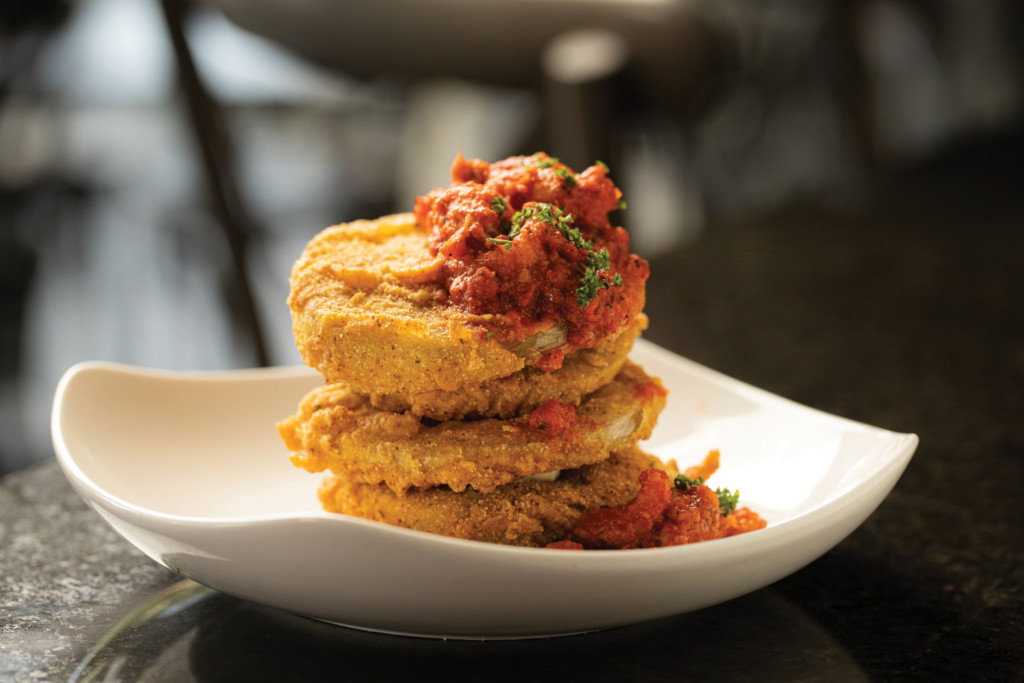 Fried green tomatoes are sliced porterhouse-thick and topped with a chunky crawfish and red pepper sauce. // Photo by Zach Bauman

I admired the novel preparation of the fried green tomatoes ($10), which were sliced as thick as a porterhouse but tender all the way through. The crumbly breading didn’t stay crisp long beneath a blanket of roasted red pepper and crawfish, but I didn’t need much incentive to eat them quickly. The promised “blue cheese crumbles” were actually a thin sauce, but the sauce dressed only two of the four tomatoes, making the appetizer safe to share with blue cheese skeptics.

When Soirée errs, it’s almost never in invention. Moore’s flavors are solid, and the menu is well-crafted for the space and vibe. But both the front and back of house seemed to struggle with consistency. 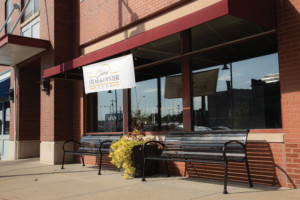 Enormous windows peer out at onto the 18th and Vine district. // Photo by Zach Bauman

Soirée’s hostess, it should be noted, is exceptional. On each visit, I was greeted with the warmth you might extend to a far-flung relative arriving home for Christmas. But timing was a major issue across all three visits, a notable misstep at this price point.

On two of my dinner visits, appetizers hit the table after the entrées. At a Sunday brunch, plates appeared seemingly at random. Three of my party of six received their entrees. Then the appetizers arrived. Minutes later, two more entrees sailed out. By this point, I was the only one left to be served, so I urged my tablemates to dig in, sure my shrimp po’boy was on its way. It arrived almost 15 minutes later, once most of my friends had finished their meals. When our server finally stopped by, it wasn’t to explain the delay or refill our long-empty water glasses but to ask how we wanted the check.

The brunch menu listed a confusing carousel of prices, too—an $18 caesar salad, an $11.50 po’boy, $22 shrimp and grits. The restaurant seems to be working this out. When the bill for the shrimp and grits came, they were only $15; my crab cakes were $1 less expensive than listed, too. 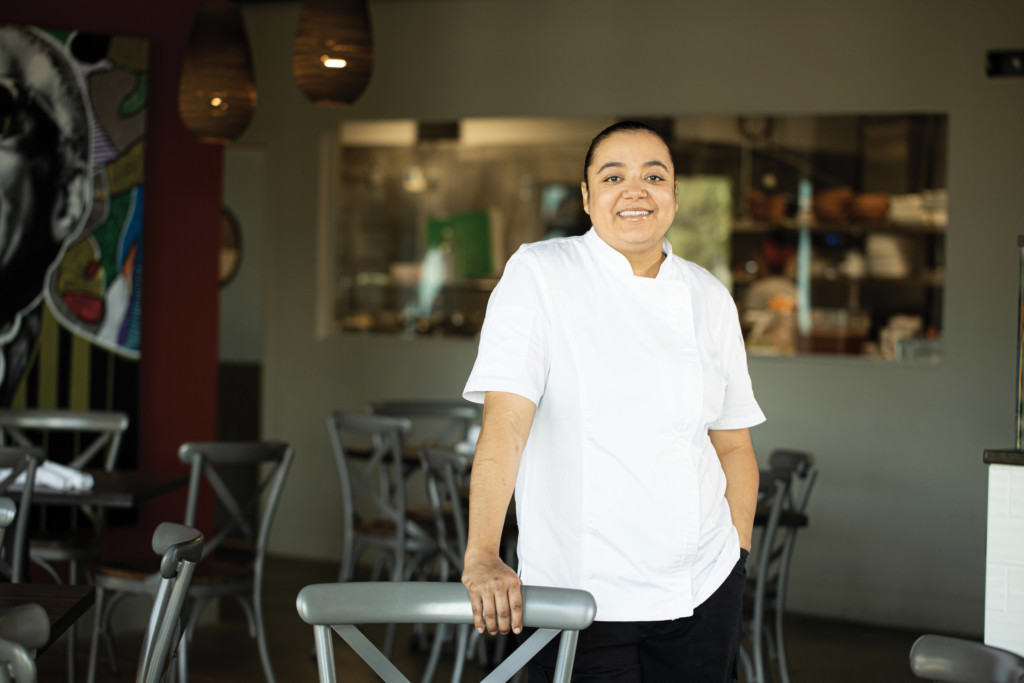 That’s good news, because some of the brunch plates are exceptional. I enjoyed those grits, which were gorged with Parmesan and flecked with andouille sausage. And I found a glossy-bunned hot chicken sandwich ($11.50) satisfying, if a bit sloppy and saucy. Even the po’boy was worth waiting for. It arrived open-faced, laden with plump, juicy shrimp with a crisp, ethereal breading. The pickled red cabbage was a miscue, adding moisture without much zing. But I wouldn’t have traded the zig-zag of tangy remoulade that dribbled profanely from the sandwich with each bite. If you don’t mind getting your hands (and elbows) dirty, this sandwich is a can’t-miss mess.

My chief gripe about Soirée is that it could be so much better. But despite a few less-than-stellar experiences, I still feel compelled to return. Maybe it’s that the space is genuinely pleasant to be in. Maybe it’s just hard to be upset when Paula Sanders is crooning Al Green songs to a room full of jaunty patterned sportcoats and bedazzled ankle boots. Maybe it’s that Moore’s cooking is suffused with thoughtful, creative touches, conceived—if not always executed—with care.

Soirée has promise. What it needs is polish. For that, I’m willing to wait.