Community support keeps the Westside thriving through our full collapse 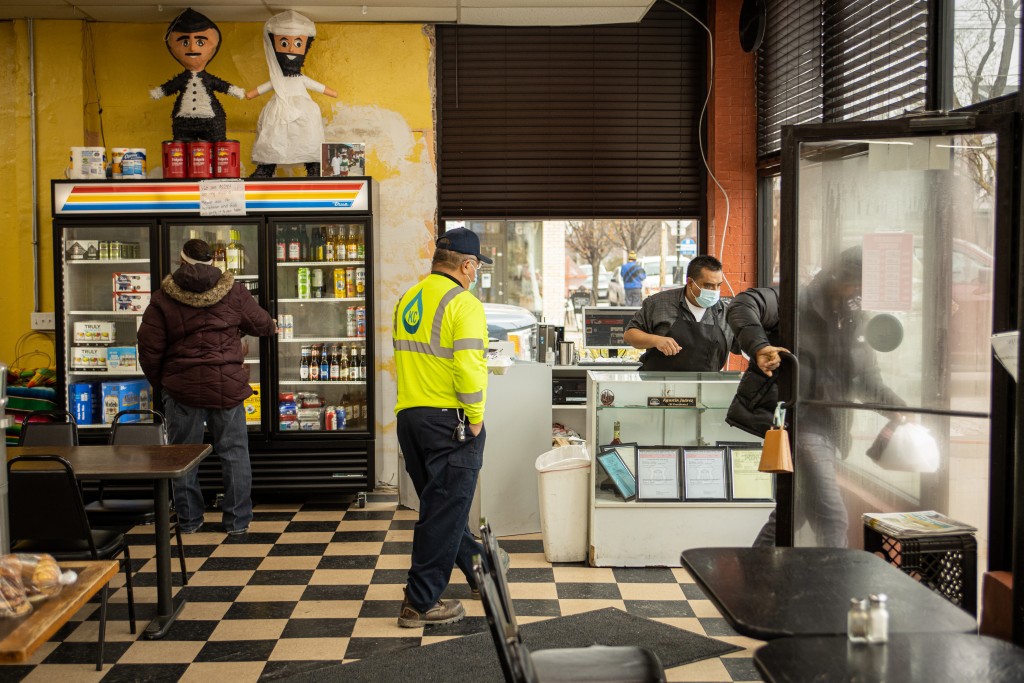 On a sleepy Wednesday in December, I went for a walk on the Westside. It was sunny but cold, and I didn’t expect to encounter many people as I stalked past the neighborhood’s curious mix of concrete-and-glass modern homes and whitewashed brick duplexes as old as the city’s railroads.

Instead, I felt like I’d stumbled onto a small parade. Accordion music streamed out of an open door at Los Alamos Market y Cocina; inside, cartoonish piñatas swung from the ceiling like punching bags. Across the street, the door to Blue Bird Bistro chimed open with the Hallmark tinkle of a bell. Every table on the sidewalk in front of Chez Elle, the brick-faced crêperie and coffee house, was full of diners in sunglasses and sweatshirts.

If it wasn’t for the masks dangling from customers’ ears—and the omnipresent dread draped over my soul like a weighted blanket—I could have forgotten Kansas City was in the middle of the worst phase of the COVID-19 pandemic yet. Businesses across the city have taken a pounding from the pandemic and associated shutdowns, and any attempt to sketch an economic silver lining is bound to ring false. But in tentative, relative terms, the Westside seems like it might be doing…kind of…OK?

“Oh, we’re doing more than OK,” Los Alamos owner Agustin Juarez says. “We’re doing great. For me, because we’re so blessed—to me, it seems like there’s nothing happening out there. Because there’s no day that we’re not busy.” 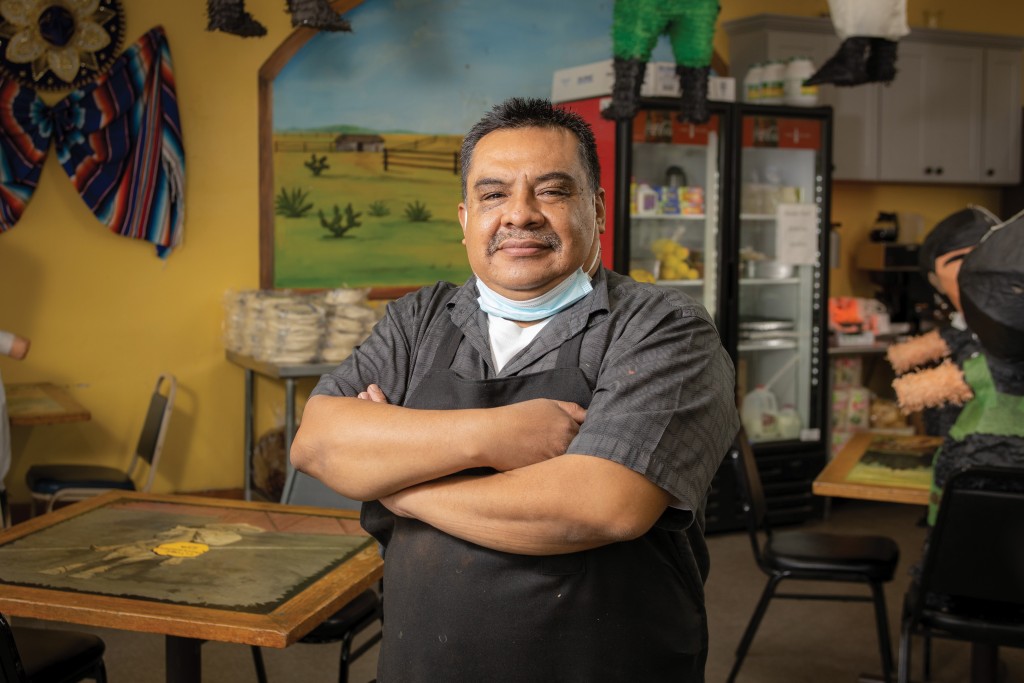 Juarez has been operating at the corner of 17th and Summit for almost 20 years—long enough to build relationships with the community, long enough that he knows just about everyone in the neighborhood’s name. The pandemic hasn’t changed him much. He wears a mask, now, but he still holds court behind the restaurant’s glass case, giving customers good-natured ribbings while he fills tray after Styrofoam tray with dripping meats in jewel-toned sauces.

Customers have been pouring in lately, worried Los Alamos might close. They tip well, fret often, overpay for their tacos on purpose. “I had a priest who came in and gave me an envelope,” Juarez says. “I thought it was a card, but I opened it up and there was $1,000 in cash. From a priest! He made me cry; he made me cry.”

The success of Los Alamos has a lot to do with Juarez’s singular personality and hustle; you get the sense he could make the business work just about anywhere in town. But he knows there’s something special about the Westside, too. There’s an unusual amount of foot traffic, to start—those piñatas dangling from Los Alamos’s ceiling are meant to be colorful lures for pedestrians. According to Juarez, they work.

Want the straight dope on Kansas City news and events?

Check out our newsletters

The business mix helps, too. Juarez points out the variety of restaurants he can see from his front door—Chez Elle (French), Clay & Fire (Mediterranean), Blue Bird (crunchy American). “We’re not right on the Boulevard, if you get the picture, where all the restaurants are Mexican, Mexican, Mexican,” he says. “On top of the hill at 17th and Summit, everyone’s different. I think that’s what makes it unique.”

That variety has a cost, of course. Latino immigrants largely built up the Westside, and as the neighborhood has grown and attracted more development, some of its original residents have been priced out. For years, Juarez and his family owned a home near their business. Not anymore. 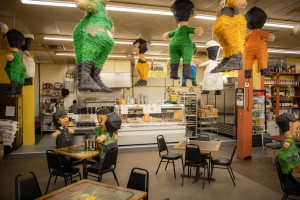 The piñatas at Los Alamos. // Photo by Zach Bauman

“These gringos came and bought me out.” He says this without a trace of malice—those gringos have also helped keep him in business. What was that 2020 cliché? It is what it is.

Still, the neighborhood’s working-class history—and its more measured approach to development—have slowed the pace of gentrification relative to some other areas of Kansas City. Since 1973, the Westside Housing Organization has been working to expand affordable housing options in the neighborhood and save existing homes from being torn down for highway construction. The Guadalupe Center, another nonprofit, has provided social services to Westside residents and the broader Latino community since 1919.

Recent multifamily housing developments have brought a mix of young professionals and lower-income families to the neighborhood, apartment complexes scattered among stately historic homes. For now, at least, the Westside doesn’t feel economically or culturally homogenous. And as the economic crisis deepens, new residents have been a lifeline for area businesses. 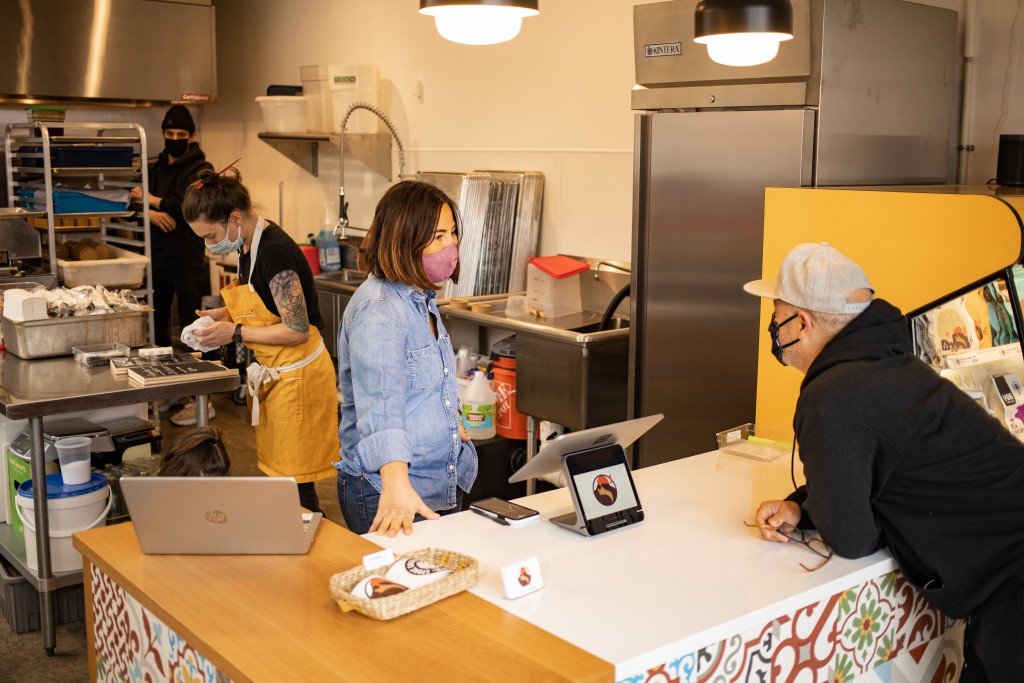 The diversity of the Westside—its people, its businesses, its architecture—is what drew Sonora, Mexico native Marissa Gencarelli and her husband, Mark, to open a small retail outpost of Yoli Tortilleria there.

“I like mixed-income communities,” Gencarelli says. “You have small homes right next to these other gigantic homes. I don’t want to get too political here, but the fact that someone is running a bank or whatever and walks by another house that may not be in their financial situation—you create that awareness of overall societies and communities and what they need.”

Gencarelli says she’d tried to move Yoli into the neighborhood twice before she succeeded this July. Opening a new storefront during the pandemic would seem like a risky prospect for any entrepreneur, and Gencarelli’s still cautious—she’s thinking week to week, not year to year. But so far, she says, business has been surprisingly good. 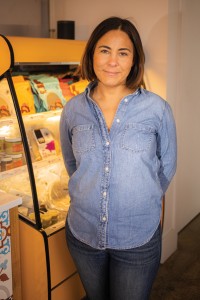 Marissa Gencarelli, owner of Yoli Tortilleria, which opened in the Westside in July. // Photo by Zach Bauman

“We feel pretty optimistic,” she says. “Opening through COVID would be suicidal for most people, but for us, it was the best thing we could have done. Because we have a small footprint, we can put [new products] forward and see customer’s reactions without having to hustle through a distributor.”

The Gencarellis have been making the most of their square footage. The refrigerated case inside Yoli’s small-but-airy space is almost always brimming with a new salsa or bottled drink; a freezer just inside the door is stacked with tamales. Gencarelli tries to keep the events fresh, too, hosting kaleidoscopic pop-up feasts at the store in partnership with local chefs. The tight-knit business community has been a big help with those. At a recent pop-up event, Gencarelli ran out of cabbage. She ran next door to Los Alamos, and Juarez offered her one of his own.

She notes that community-minded attitude isn’t specific to the Westside—when you’re a small business owner, you help your neighbors. You take care of each other. The broad mix of nearby businesses here just makes it easy. Gencarelli says she’s never felt like she’s in competition with any of her neighbors. 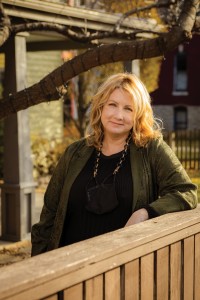 Jenny Vergara, a longtime Westside resident and contributing editor for Feast Magazine, points to businesses like those owned by Juarez and Gencarelli as examples of the Westside’s more thoughtful approach to development. “You know, it’s independent,” Vergara says. “There’s not a single chain over here, and that’s by design and by desire, just because the landlords are kind of watching out for who they let in. The landlords that own the restaurant and retail spaces in the Westside live in the Westside, and they all traverse and go to these places too.”

Perhaps no one fits that description better than Adam Jones, a real estate developer who’s lived on the Westside since graduating from the Kansas City Art Institute in 1982. Jones renovated the iconic two-story house at 815 W 17th St, a spot that’s housed restaurants such as Novel and Fox & Pearl. For all its quirks, it’s beloved by customers, and Jones could have rented the house to just about anyone to keep his cash flow up during the pandemic. But he had promised the space to his friend Orcan Yigit, a restaurateur based in Ankara, Turkey. 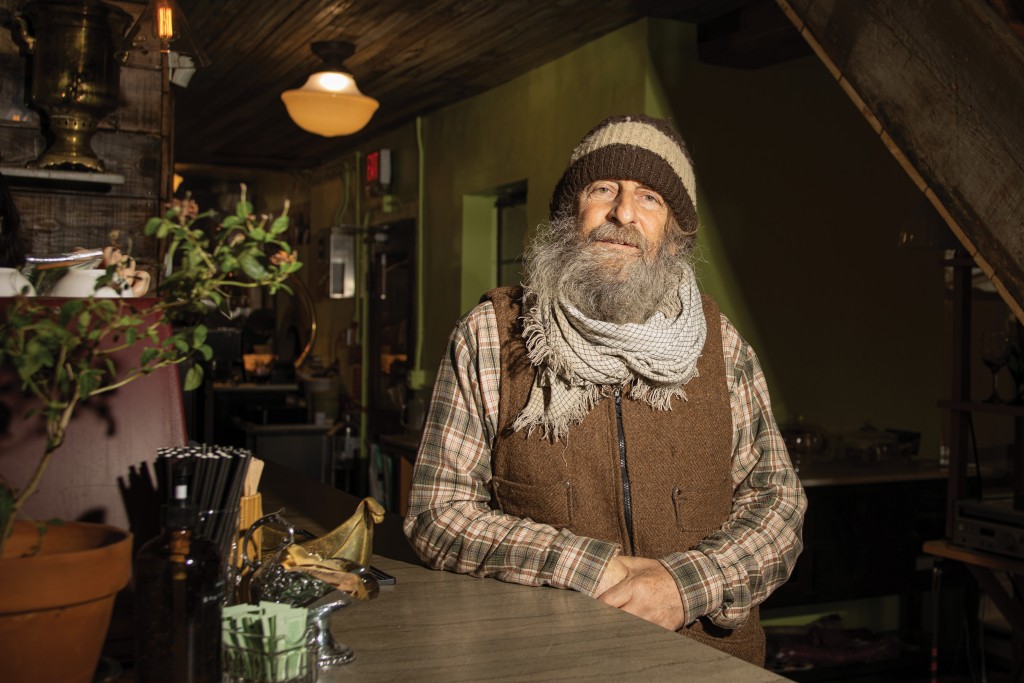 Adam Jones inside his restaurant Clay & Fire, which also opened in the middle of the pandemic. // Photo by Zach Bauman

When the pandemic hit, travel shut down, and visa challenges have kept Yigit stranded in Turkey since. Instead of abandoning his plans, Jones brought in chef Brent Gunnels—a fellow Westsider—to help open the Middle Eastern restaurant on schedule. Jones and Gunnels have been on the phone with Yigit and his chef in Turkey constantly to share ideas and refine the menu. The collaborative result, Clay & Fire, opened in September. 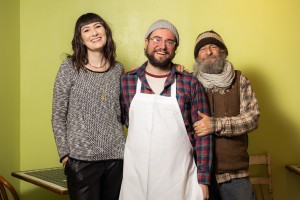 Jones says he’s felt the neighborhood support throughout his career, but the new development has made a noticeable difference. “I’ve been here a long time, and there never used to be this traffic. There’s just new people all the time—and they’re moving here, living here because of the community that we’ve built over the past 30 years. They’re trying to support local biz, and they’re totally in exploration mode.”

Like Juarez and Gencarelli, Jones says the variety of neighborhood businesses has been a strength during the pandemic—visitors can grab a latte at Goat Hill Coffee & Soda, shop for lingerie at MADI Apparel, have lunch at Chez Elle, and pick up a loaf of bread at Fervere for dinner. The Westside is a destination instead of just a pit stop.

Jones counts himself lucky to have the support of those neighbors as well as his friends in the restaurant industry. He thanks his customers profusely; he calls Gunnels “a warrior.” Even though Clay & Fire opened in the middle of the pandemic, it’s been doing better than quite a few local restaurants. But Jones is still worried. He’s says he’ll need to do brisk carryout business to weather the winter. 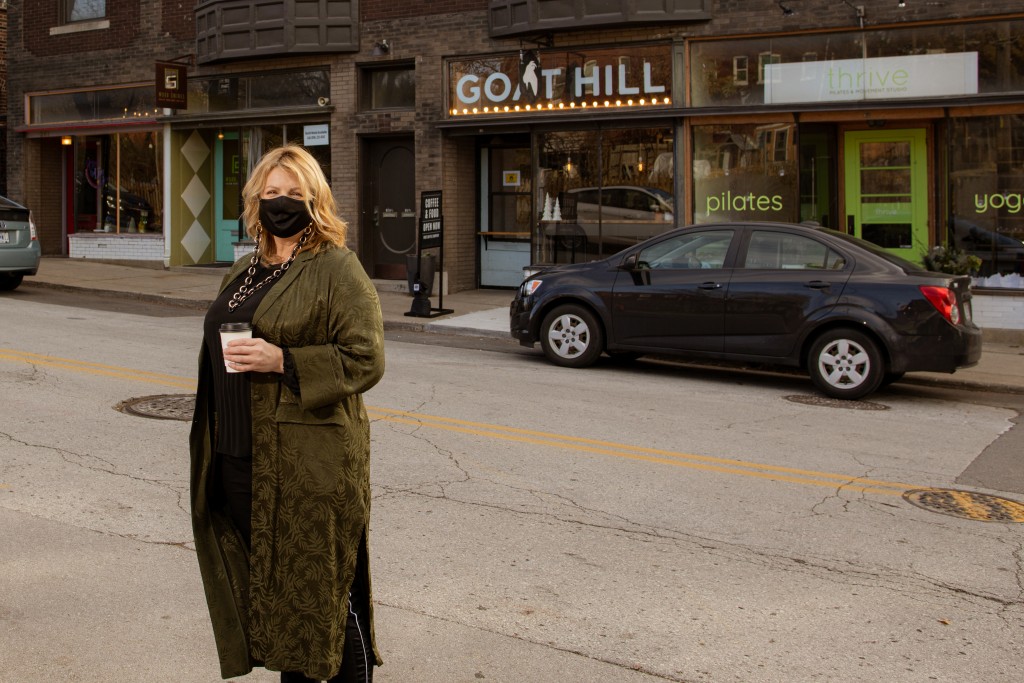 “I’m just praying—we’re just about to have our liquor license I think, it’s been a little arduous—and if we can just get to a break-even point where we can just hold on until things change, I’ll be in heaven. I think we’re close.”

“Close” is still a precarious place to be. The Westside’s walkability, diversity, and mixed-use, mixed-income development have been a boon during the pandemic. But it ain’t magic. The virus lives here, too. Business owners—restaurant owners in particular—have been forced into an impossible bind as they weigh the guidance of public health experts against mounting bills and vague municipal ordinances. And in the face of those challenges, one of the neighborhood’s beloved marquee restaurants, The Westside Local, closed in December.

The cruel irony is that the restaurant’s community mindset partly contributed to its closure. Although Kansas City has allowed some form of in-room dining since May, owner Brandon Strick decided to stick to carry-out and occasional patio dining to try to keep his staff and customers safe. “My partners and myself and my staff all agreed that safety was the more important thing,” Strick says. But safety couldn’t keep the lights on. 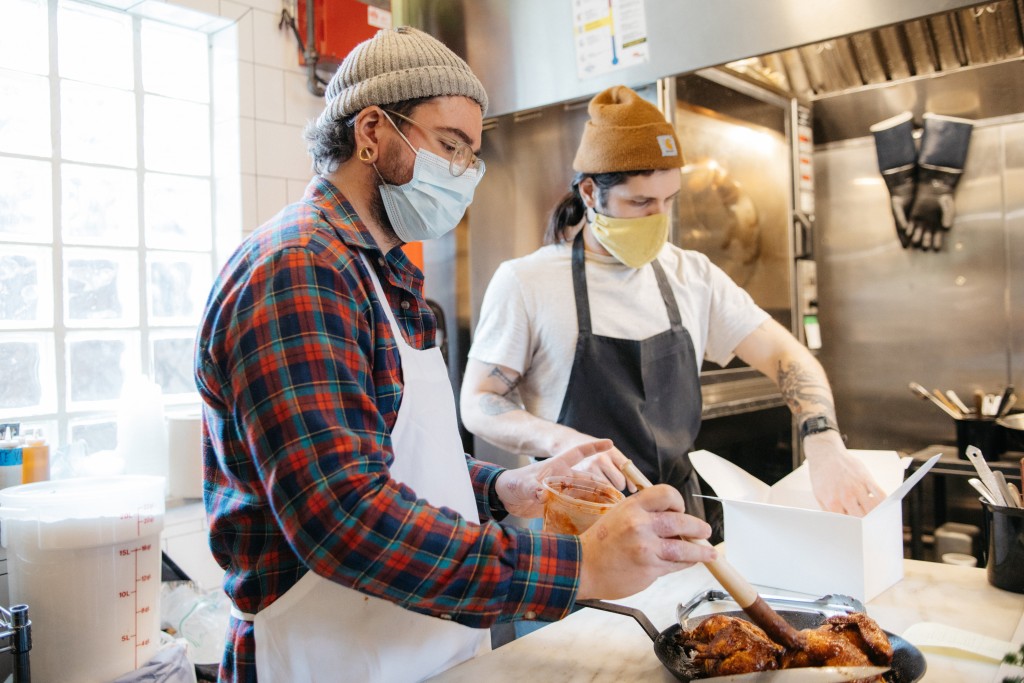 The kitchen of Clay & Fire. // Photo by Zach Bauman

Strick hopes he can reopen The Westside Local in 2021—Congress pending. He says without an additional federal relief package, there’s just no way for him to keep going. But he’s grateful for the support he’s received, and he can’t imagine going anywhere else.

“The neighborhood has kept us going this long, and I cannot say enough about that. It has truly been our regulars—the people that we saw all the time before, and as soon as we reopened, we saw them continually. The love and the support has been so strong.”

I ask Strick what drew him to the Westside in the first place, and he reacts as though I’ve asked him to explain why sex is good or French fries are delicious—like, have you been here? Are you kidding me? He went to school for architecture, he says—he fell in love with the neighborhood and the building circa 2009.