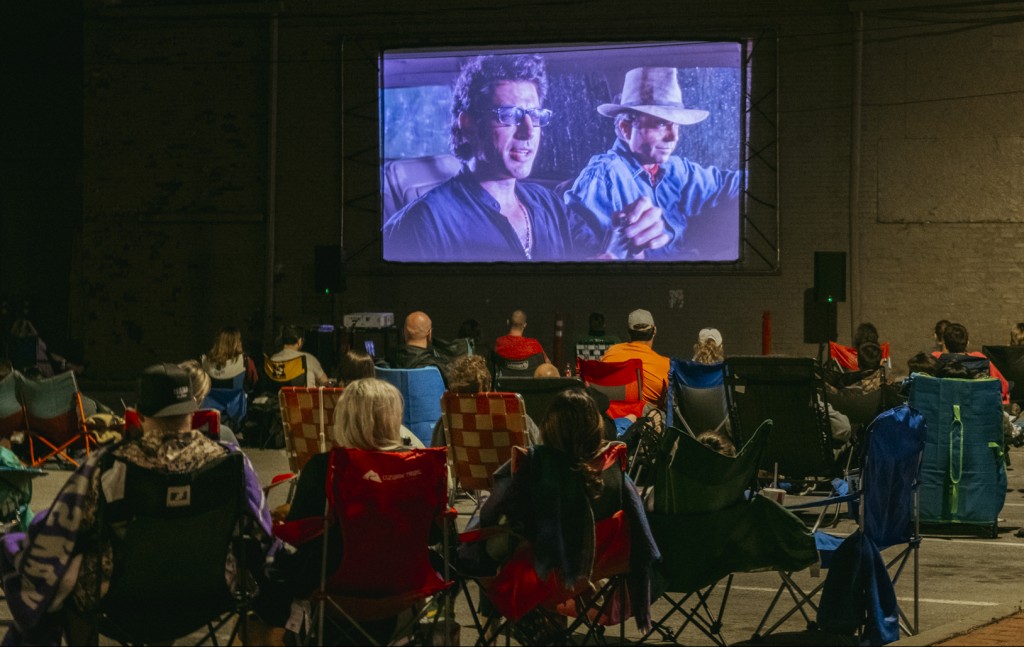 Kansas City’s cinema circle is supplying the demand for unique film experiences, bringing you something fresh, something nostalgic, and, in this case: something outdoors. To help you navigate those excellent nature-tinged opportunities, we’ve compiled a mega movie event guide for your viewing pleasure.

Starting June 4, Boulevard Brewing Co. and Screenland Armour will co-host Backyard Movies with Boulevard to play your favorite throwbacks in the back parking lot of Screenland Armour—including The Princess Bride, Beetlejuice, and Big. This marks the third year the two orgs have collaborated to bring this to KC.

Tickets, which can be purchased here, are $5. The event is BYOC (bring-your-own-chair), seating is unreserved, and it wouldn’t be a Boulevard event without Quirks, Unfiltered Wheat beers, Space Campers, Tank 7s, and ready-to-drink Paloma or margarita cocktails. 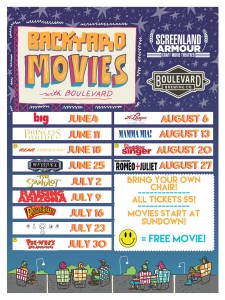 The showings for Backyard Movies With Boulevard 2022. // Photo courtesy of Screenland Armour

The series features cult-favorite, quote-a-long films like A League of Their Own, Pee Wee’s Big Adventure, and William Shakespeare’s Romeo + Juliet (1996) outside of a traditional, indoor theater.

Movies in the Square by Park Place

Complement the aforementioned oldies with Park Place’s Movies in the Square series in July. Here, attendees can rewatch classics including Wayne’s World (July 16), Field of Dreams (July 9), and 16 Candles (July 23). Showings will run from 8 p.m. to 11 p.m. at Barkley Square, 11565 Ash St.

Admission is free, and seating is limited, so it is recommended that attendees bring their own chairs. Event updates will be posted on the Park Place Facebook page.

Tivoli Under the Stars by the Nelson-Atkins Museum of Art

For the second summer, the Nelson-Atkins Museum of Art will put on its Tivoli Under the Stars series every Friday night through June and July.

The films—curated by Jerry Harrington, former owner of Tivoli Cinema—cover a variety of genres: Coco, Labyrinth, Sister Act, Bring it On, Notorious, The Princess Bride, Enter the Dragon, The French Dispatch, and Moonstruck.

Tickets, which can be purchased here, include parking and one “pod” of lawn space that accommodates up to four people, but seating itself will not be provided, so: BYOC. For members, one pod costs $42; for non-members, pods cost $58. Food and drink will be available from 7:30 p.m. – 9:30 p.m. Outside food and drink will not be permitted.

Pack your blankets and lawn chairs for Crown Center’s Weekender series. In the Crown Center Square, experience Jungle Cruise, Indiana Jones and the Last Crusade, or Guardians of the Galaxy under the night sky.

The series will run on Saturdays through July and September. Films will start at 9 p.m., right after a 6 p.m. concert performed by local bands including the Damien Gunn Band, the KC All-Stars, Retroactive, and the Accidental Moguls.

Admission is free; alcohol is not permitted, and concessions will be offered by local food trucks and beverage tents. Event updates can be found on the Crown Center Facebook page.

Lenexa’s Movies in the Park

Lenexa’s outdoor film series Movies in the Park will show PG films including Jurassic Park, Free Willy, and Flight of the Navigator on select Fridays through September.

The event will be held at Buffalo Meadows Park where both admission and parking are free, and this event is BYOC. See the City of Lenexa Facebook page for more information.

The event is free to the public and will be held at the outdoor location of Theatre in the Park in Shawnee. Gates open at 8 p.m., and the movie begins at either 8:30 p.m. or sundown. Concessions, beer, and wine will be sold at the venue, but patrons may bring their own food and drink. BYOC.

Wondering about cancellations? Call Theatre in the Park’s notification line at 913-477-7170.