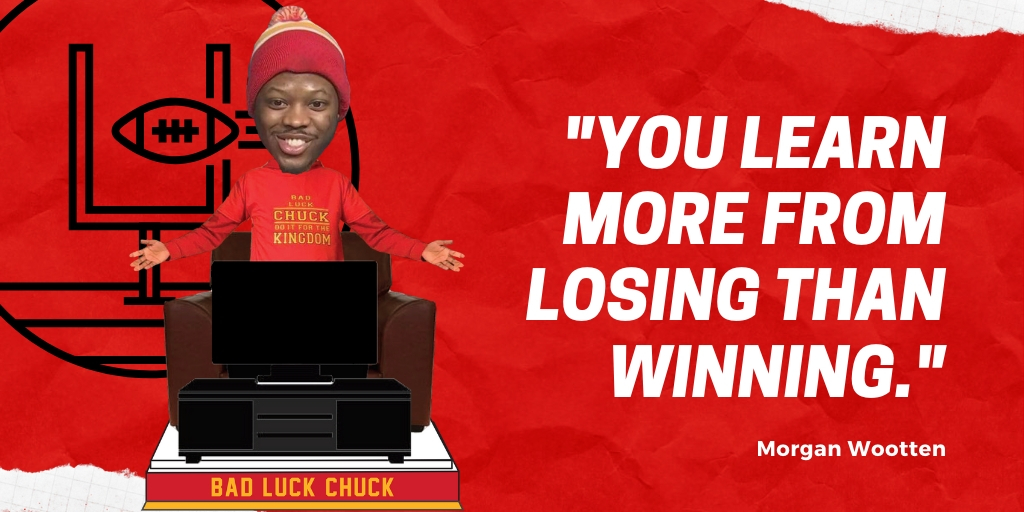 Today is the big day. The big day of the big game. Game Day, baby.

Dunno what else to say by way of intro here. If you’re reading this you already know exactly what’s up. In line with that, our inboxes have been flooded for two weeks with all types of press releases and odd tales about happenings around town. We’ve cobbled together a few of our favorites here for you to take a look at before kick-off.

Don’t forget to check out our list of watch parties and food/drink Chiefs events. Also, cue up the unofficial anthem of this year at your place to really shock your friends that haven’t heard it yet.

And. Not to brag. But check out the incredible cover for the latest issue of The Pitch. (Now on street corners everywhere!)

Penn, a 31-year-old postal clerk from Missouri and lifelong Chiefs fan who is known to cause the Chiefs to lose when he’s in attendance, went to the AFC divisional playoff game against the Houston Texans after spending $258 on a ticket. When the Chiefs fell behind 21-0 in the first quarter (and later 24-0), Penn tweeted a video of himself leaving Arrowhead Stadium in hopes of reversing his team’s fortunes. In the 31-second video, he said he was heading out to watch the second-half comeback from the comforts of home. The Chiefs went on to score 42 unanswered points en route to one of the biggest comeback victories in NFL playoff history.

On a base bearing his now-famous nickname, the bobblehead features “Bad Luck Chuck” sitting on his couch in front of his television set with his arms outstretched. He is wearing a shirt that says, “BAD LUCK CHUCK – DO IT FOR THE KINGDOM” along with his knit cap.

“I never thought I would have a bobblehead of me made, but when the Hall of Fame and Museum approached me about it, I thought it was an awesome idea,” Charles said. “As long as fans keep them away from the stadium, I think it will become a good luck charm that will bring us a lot of wins for years to come.”

ArrowHeads (is that what we call our fans? can we start doing that?) all know Puppet Lady from her appearance at games. Janel Renee Carbajo was inducted into the Ford Hall of Fans this week, and found out when she was surprised at her Miami hotel room.

The Kansas City Symphony is getting into the Super Bowl spirit this week too! Conductor Michael Stern and the Symphony perform John Williams’ Wide Receiver in Helzberg Hall at the Kauffman Center. You’ll recognize the music from the NFL broadcasts.

While it didn’t work out to do a wager with San Francisco Symphony, we did get a special shout-out from a Miami orchestra. The conductor of the New World Symphony (based in Miami Beach) is Michael Tilson Thomas. He also happens to be the Music Director for San Francisco Symphony. Since MTT is in Miami this week, and he made a nice welcome video where he also notes that more than 25 alums from the New World Symphony play in the Kansas City Symphony. More alums from New World Symphony play in our hometown than any other place in the world, which is kind of a cool tidbit.

Whether it is true or not, the city seems to adore this story about Mahomes buying pizzas. 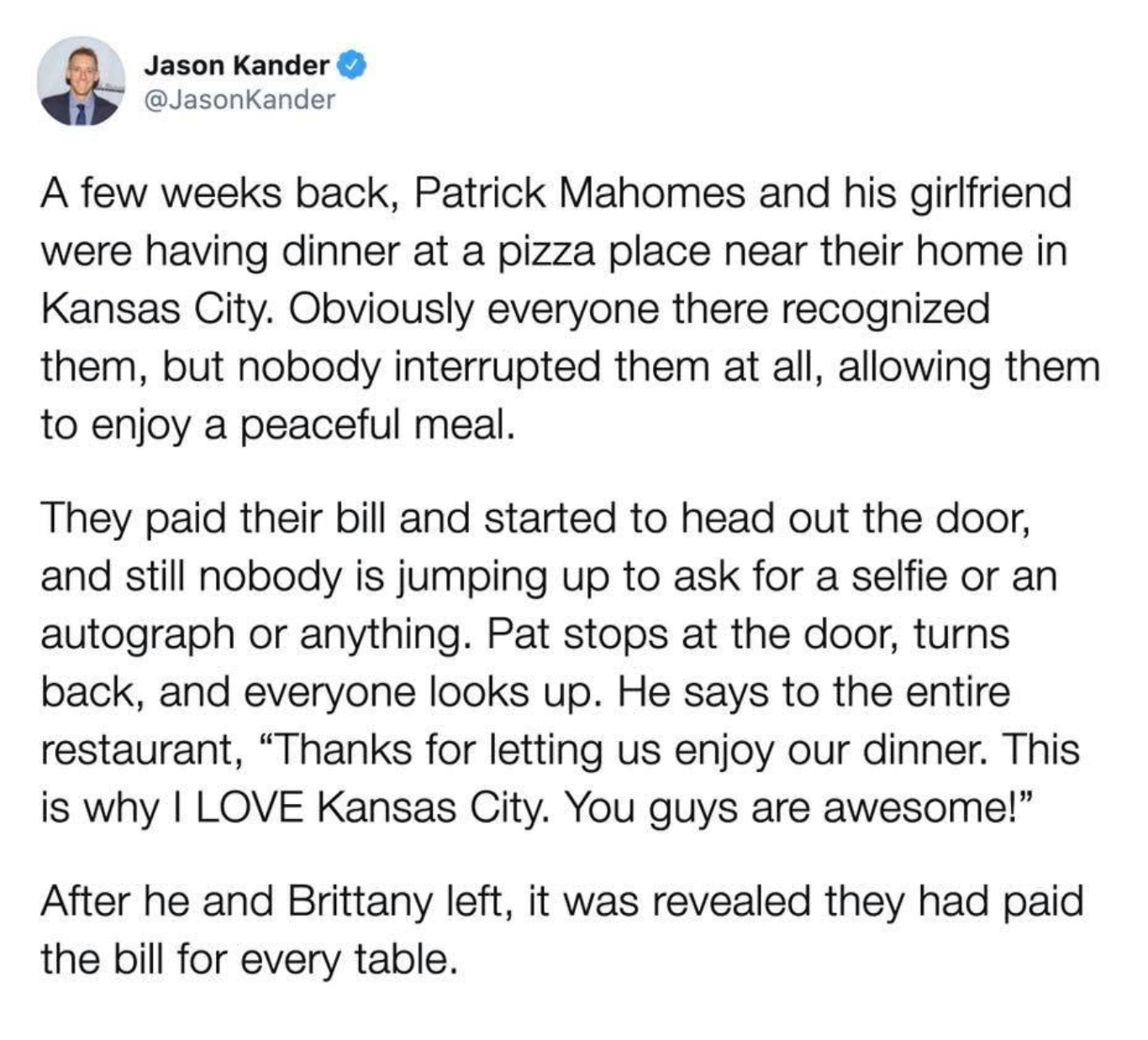 Worth remembering that earlier this year, Mahomes put the kibosh on a local man who was attempting to sell a piece of pizza that Mahomes left at a mall food court.

Each year, PetFirst Pet Insurance tests team loyalty by analyzing its nationwide database of cat and dog policyholders to see what teams inspire the most pet names. This year, the pet insurance company found that people are more likely to have a pet named after a Kansas City Chiefs player, compared to the San Francisco 49ers.

There are 513 pets in the database who share names with Chiefs players, while 365 share names with 49ers. That is despite San Francisco being a larger city with nearly five times as many PetFirst customers as Kansas City.

In addition, there were 24 pets named “Chief,” up 20 percent from last year. There was even one dog named KC Chief.  Alas, none were named 49er. (In fairness, it doesn’t roll off the tongue when calling your pet.)

Overall, Sammy Watkins, Chiefs wide receiver, and Chiefs Offensive Tackle Jackson Barton were the most likely individual players to be namesakes – with 69 Sammys and 84 Jacksons. Joe Montana, the retired quarterback who played for both the 49ers and Chiefs, also appears on the roster of names, with 9 Joes and 6 Montanas. 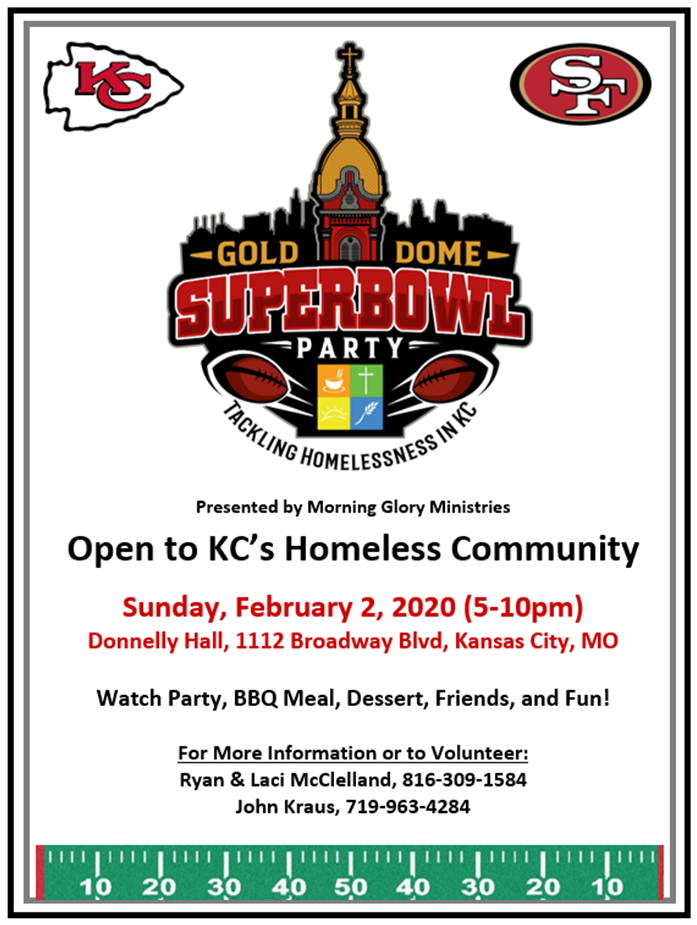 Ryan & Laci McClelland were set to pay a ton of money to fly to Miami for the game. Instead, they’re using that cash to host a Super Bowl party for the homeless and less fortunate in KC, who might not have access to watching the game otherwise.

This absolutely rules. I can’t think of a better example of what a game like this can bring out in this community as a whole.

The party goes from 5-10pm at Morning Glory Ministries, located on the campus of the Cathedral of the Immaculate Conception. (1112 Broadway Blvd – Kansas City, Missouri 64105)

There is a giant projection screen to watch the game, a catered Jack Stack BBQ meal with dessert, and offer free haircuts and raffle prizes to those in attendance.

Ryan says: “Chiefs Kingdom is made up of people from all walks of life.  We wanted to give everyone, no matter their circumstance, a safe and friendly atmosphere to watch the big game.”