In Independence, the year-old Nigerian restaurant My Village Grill is a welcome home away from home

Chef-owner Victor Ejelonu often pulls double-duty, greeting guests and dashing back to the kitchen to prepare their meals. // Photo by Zach Bauman

Here’s the thing: I’m not an expert on Nigerian food.

This confession shouldn’t come as a surprise. I grew up in rural Iowa and have the skin tone of someone who spent the last 30 years locked in a windowless basement.

But restaurant criticism seems to demand that one adopt an authoritative tone — that one make flat pronouncements about “insipid” soups and bluster about perceived gaffes in technique. What’s an ignorant critic to do?

I read, of course — as much as I can get my hands on. I try as many dishes as possible. But when it comes to the food at My Village Grill, the year-old Nigerian restaurant in Independence, I know I’m missing some culinary touchstones. I’ve never inhaled the raw scent of a stick of oburunbebe before it’s simmered to make banga, or tasted a bush mango seed before it’s ground into a coarse powder for ogbono soup.

“You are going to have an experience,” he told me after taking my order (efo riro with pounded yam). He sounded almost giddy, as if a voice could skip. “You’re going to be Anthony Bourdain.”

I looked around the restaurant, spotless and empty. I didn’t feel like Bourdain. I felt like a guest at a wedding in an Elk’s Lodge circa 2000. Black tablecloths were topped with glittery gold charger plates; colorful helium balloons were tacked to drop-ceiling tiles; strings of color-changing LEDs pulsed around the bar. Laugh, commanded a sign on the wall in curly silver script. On the eastern wall, a portable stage squatted beneath an electronic disco ball, both waiting to come to life.

I felt like turning on that disco ball when the efo riro arrived. The stew was smoky, spicy, and richly flavored. Although efo riro is often made with amaranth, My Village Grill uses spinach leaves cooked down until they’ve practically absorbed into the savory broth. The greens add a bittersweet pulse to the fermented funk of stockfish and the bracing red heat of the soup’s pepper base. If you’ve never tried Nigerian soups before, this is a great introduction.

Ejelonu has assembled a menu that represents a broad cross-section of Nigerian cuisine. Some of the dishes on offer are popular in the Niger Delta, others in western Nigeria. A few soups, such as efo riro, originated with the Yoruba people, others with the Igbo or Efik. 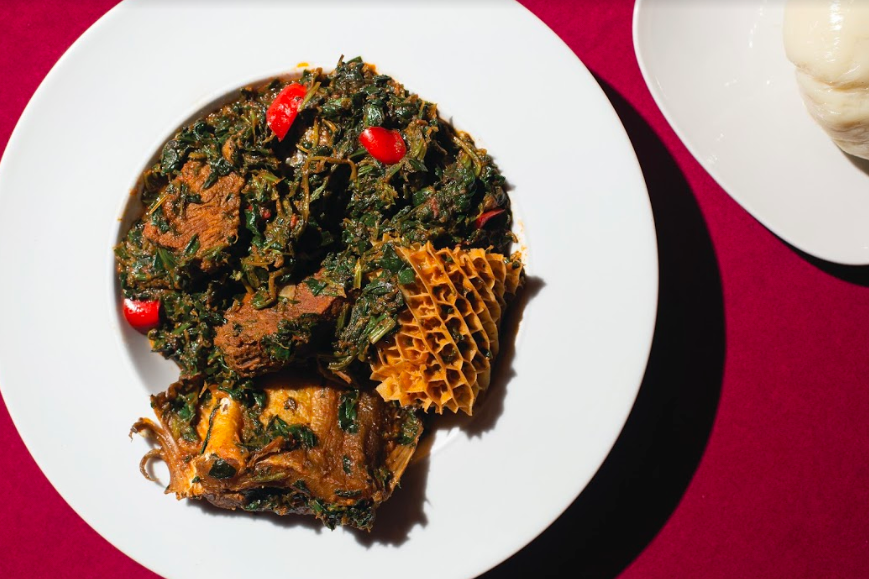 Part of the “experience” Ejelonu alluded to lies in the act of eating them. The soups are part of a menu of “swallow meals” — a reference to starchy accompaniments like fufu meant to be “swallowed” with your soup. My Village Grill offers several swallows, from pounded yam fufu (wispy and soft, with a texture like stiff mashed potatoes) to eba fufu (a toothier, grainier dough made from grated cassava). Forget your fork and use the fufu as your cutlery. Pinch off a little ball with your first three fingers, then shape it into a starch-spoon for scooping up soup.

Peppers are a key player in Nigerian cuisine; recipe writer Yewande Komolafe turned me onto a Yoruba saying, translated as “the soul that does not eat pepper is a dead soul.” But some dishes on the menu are naturally mild. The egusi soup relies on ground melon seeds to provide a nutty taste and crumbly texture while thickening the tangy, greens-laden soup into a hearty stew.

The okra and spinach soup is another benign option, though it’s not likely to convert okra skeptics. The soup showcases okra in all its mucilaginous glory, yielding gooey spoonfuls that trail away from the bowl like chewing gum. The tripe in my bowl was too tough to power through — I’d order it with the goat next time, which is mild and sweet and fall-off-the-bone tender — but the broth’s subtle flavors let the flavor of the okra shine. 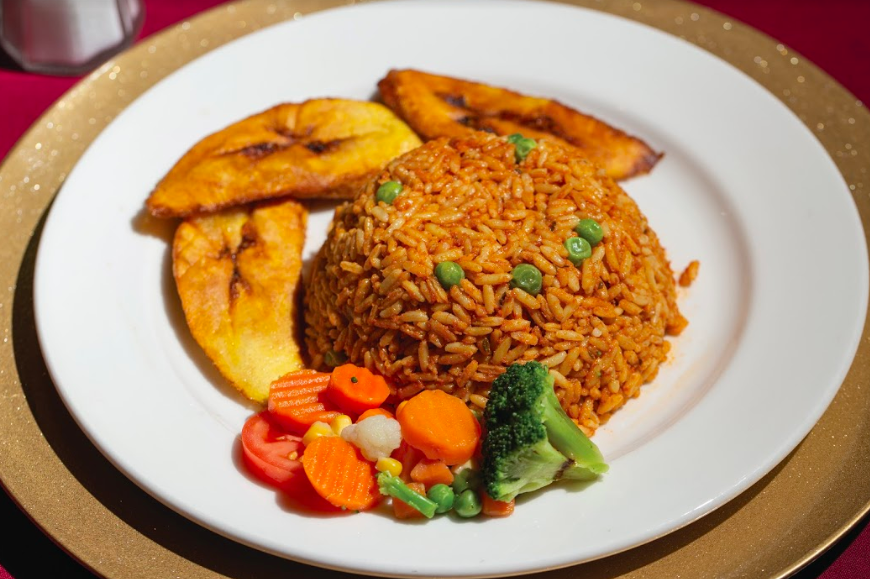 On the other end of the spectrum: the whole grilled tilapia, which is one of the better-prepared whole fishes I’ve been served (and a great deal at $12). For years, I’ve resigned myself to ordering restaurant dishes with a “spice cushion” — which is to say, one step hotter than I actually want. (I don’t begrudge restaurants for grading on a curve; the spice distribution has been inexorably skewed by diners who find black pepper taxing).

But when I ordered the grilled fish “hot,” it came out exactly that, with a rich, round pepper burn from a fragrant, nutty spice paste dry-brushed liberally onto the flesh. I attacked the fish between lusty gulps of ice water: each morsel flaked easily off the bone but retained a plump juiciness.

As corny as it sounds, I consider that spiced-to-order fish an act of trust. Eating at My Village Grill feels like dining in a new friend’s home. The chef and servers are eager to share their food and invite you in; friends of the restaurant cheer on your entrée choices or lean over from the pool table to advise on fufu technique. On one visit, a friendly waitress brought my table a little dish of chin chin, crunchy wheat crackers with a subtle sweetness, because she thought we might like to try them. On another, Ejelonu insisted we try the palm wine: a milky, naturally fermented drink made from the sap of a palm tree. The bottled drink was a little yeasty and a lot sweet — an ideal complement for earthy, spicy meals.

The neighborly hospitality extends to the décor, which evokes a pan-African vibe. The Nigerian flag shares wall space with the flags of the Democratic Republic of the Congo, Zimbabwe, Ghana, and Tanzania, among others. (Before Dale with the bald eagle profile pic writes in — yes, there’s an American flag, too). 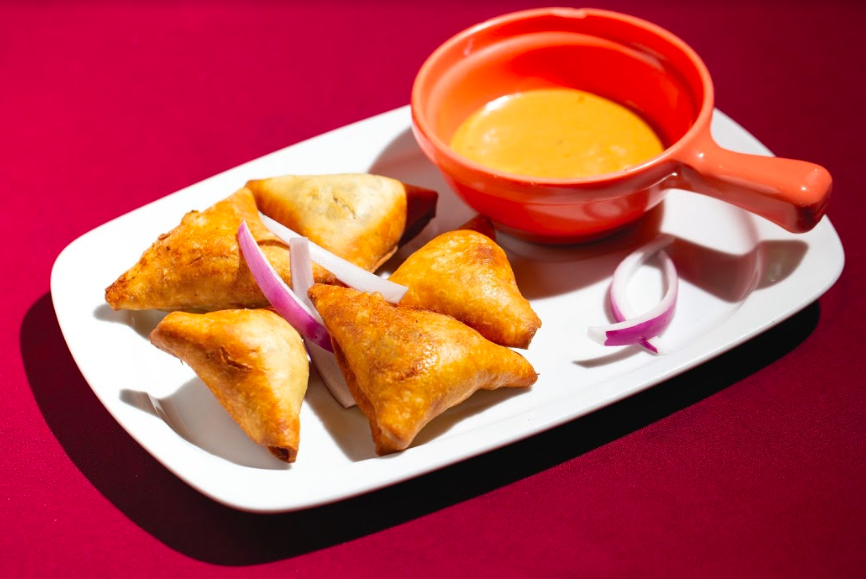 Ground beef samoosas demand to be doused in a smoky dipping sauce. // Photo by Zach Bauman

Newcomers to the cuisine have plenty of easy entry points. Take the samoosas — samosas, but twice as fun to say. The pastries come five to an order, each fried to a crisp sable brown and filled to the corners with mildly seasoned ground beef. They’re the perfect neutral vehicle for the smoky, velvety tomato sauce served alongside. Ejelonu called it his “secret sauce” and declined to elaborate on the ingredients. “If I told you…” he began, then trailed off meaningfully.

Another crowdpleaser: the jollof rice (a generous portion runs $5). Each grain of rice is perfectly chubby and chewy, tomato-rouged and spice-mottled. For a couple extra bucks, you can add stapler-sized slices of fried plantains, crisped and caramelized on the edges but tender within, sprinkled with just enough salt to make the natural sweetness crackle on the tongue. 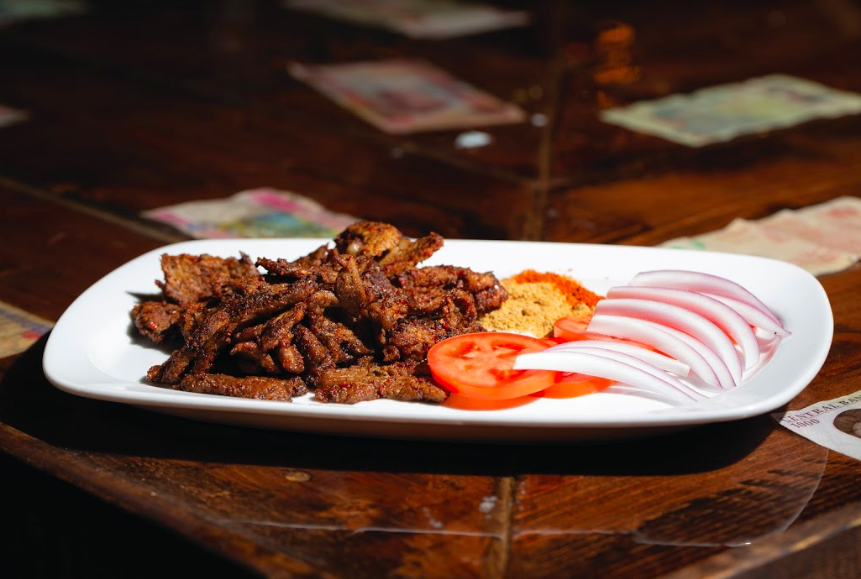 Thin-sliced beef suya is one of the restaurant’s signature dishes. // Photo by Zach Bauman

One of the restaurant’s most popular dishes is the beef suya: skewers of thin-sliced beef dredged in a peanut-forward spice blend and kissed on a grill. There’s a chicken version, too — and as with most dishes, the restaurant will customize to your spice tolerance. Still, I’d nudge first-timers toward the soup menu. You can order jollof or skewered meats at a few different restaurants in the metro; isi-ewu (spiced goat head) is harder to come by.

Sometimes I hear from diners who are wary of trying unfamiliar cuisines. “I don’t want an adventure,” someone told me when soliciting a recommendation. “I just want dinner.”

Everyone has the right to order what they like, but I find this sentiment puzzling. It doesn’t take courage to sit at a table and eat what someone else has prepared. It does take some curiosity. Enjelou had the measure of it when he called eating “an experience.” Adventures are ephemeral. You can have an experience, but you can also develop it.

Here are a couple sentences that are only marginally about food: You don’t have to be an expert at everything. You just have to be willing to learn — and to look a little foolish in the process.

I’m an expert at the latter. I’m sure I handled my fufu with the grace and poise of a famished warthog. But that didn’t seem to matter to the waitress, who dropped by the table to deliver a message with a shy grin: “I’m so happy you’re eating with your hands.”

I’m going to need to eat a lot more fufu before I master my starch-spoon technique. My Village Grill makes that practice an attractive proposition.

Best bet: Sip some palm wine and sample some samoosas while you wait for your soup and swallow — efo riro with pounded yam.