“I’m trying to get the community to understand that we can’t say f— the police, then call them when we need help,” Logan says. 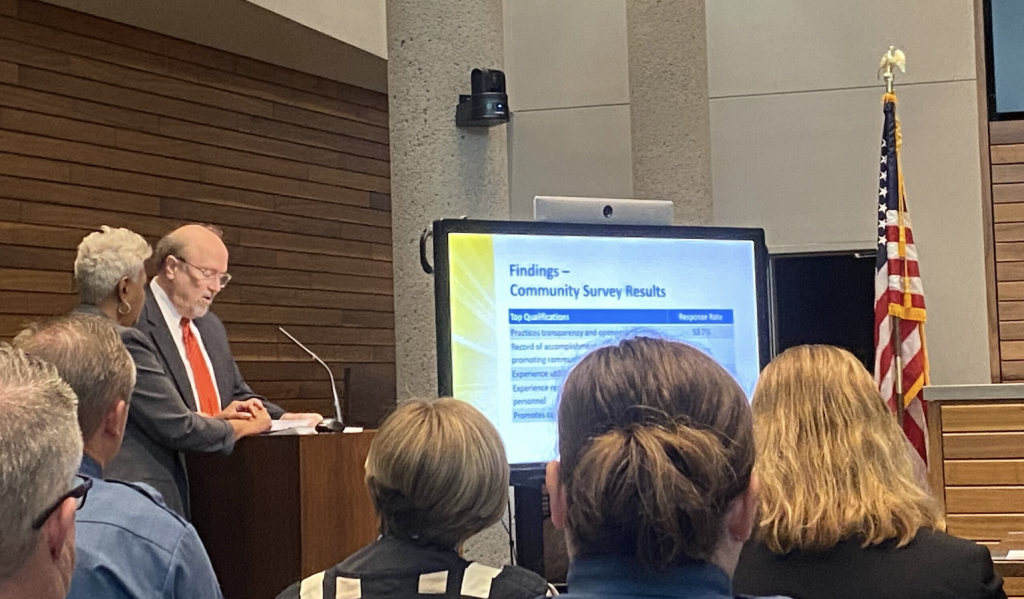 Rev. Bob Hill and Marjorie Williams break down the survey statistics behind the community’s favored qualities in a new police chief. // Photo by Lauren Textor

Over the past several months, frustration has continued to mount between residents and KCPD, especially given the hefty funding that the department receives. Kansas City is one of the only U.S. cities which does not have local control of its police department. This contributes to public anxiety about the appointment of the next chief of police and how much they might pile onto the damage that has already been done.

KCPD ranked exceptionally low in a national law enforcement study released last year, and citizens are seeking a change that reflects the values of the community and uses their money effectively.

As a refresher, the city is legally required to give at least 20% of its general funds to KCPD annually, and the $269 million police budget recently passed by the city council surpasses even that.

Since Kansas City Chief of Police Rick Smith was pushed into retiring in April, a coalition of community members has held seven listening sessions and sent out a community survey to determine what citizens want to see in the new chief of police.

However, asking Kansas Citians what we want to see in our chief’s successor feels like a performative exercise, when no one asked to participate in this process has any real sway on the actual process. Given that the Board of Police Commissioners—excepting the mayor—is appointed by the Missouri governor, none of its members face tangible consequences for bypassing any overwhelming local opinion that could be collected here.

So was this months-long effort just a chance to shout a wishlist into the wind, or are there tangible results that could impact what happens next?

As part of the day’s agenda, Desmound Logan of Cash Cars KC LLC presented thematically aligned information, as the guest of 3rd District-at-Large Councilman Brandon Ellington. Logan’s “Smoke Your Tires Not Your Homies” program of sideshows is designed to bring teens in the community together and steer them away from gun violence. Logan is now advocating for teens to get to know their local officers through events like this to encourage conversation and familiarity.

Logan is hopeful that informal discussions at a fun, casual venue will open a dialogue. Before the findings of the listening sessions and surveys were discussed, Logan introduced many of their themes by encouraging collaboration between the community and the police force.

“I’m trying to get the community to understand that we can’t say f— the police, then call them when we need help,” Logan says.

Without a massive overhaul of the department and the acidic culture furthered by Smith, it’s hard to imagine teenagers wanting to attend an event where officers will be present, let alone being comfortable enough to interact with them. 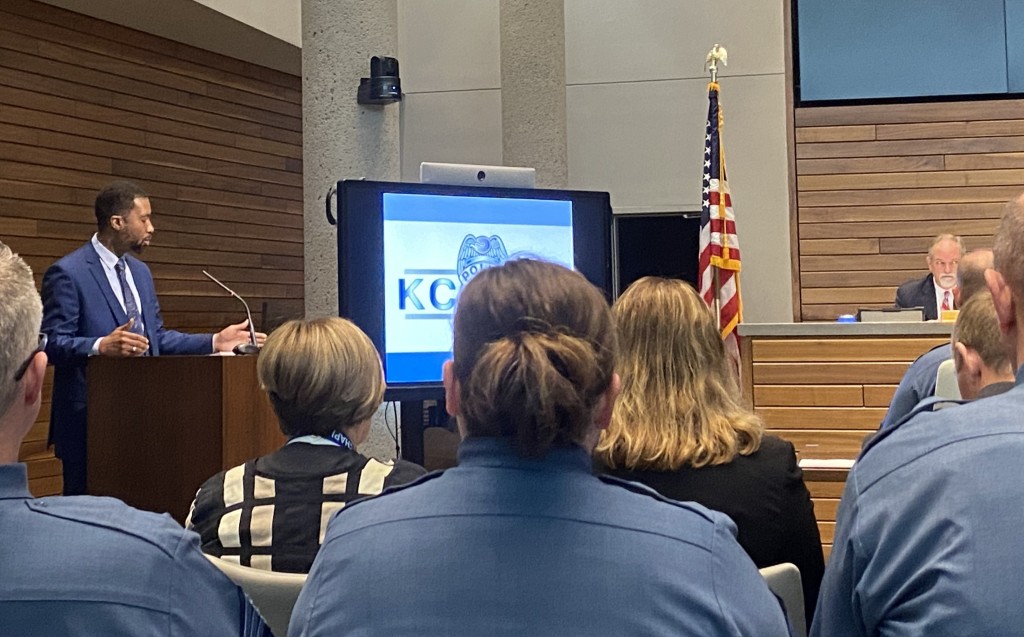 Councilman Brandon Ellington opens the meeting by discussing the need to address the nature of interactions between Kansas Citians—especially people of color—and police officers. // Photo by Lauren Textor

Joe Reardon, president and CEO of the Greater Kansas City Chamber of Commerce, transitioned into the official start of the community feedback report.

Reardon addressed the city’s undeniably high rate of violent crime, citing it as a primary reason for the significance of the community feedback report. He also discussed the importance of developing trust between all community members and the KCPD.

Reardon reviewed the 2021 recommendations from the KC Chamber and Civic Council’s joint study commission, which called for investigations of officer-involved shootings to be conducted independently of the police department, to encourage dialogue rather than litigation between the city and the BOPC, and for an increase in diversity when appointing new members to the BOPC.

This recap of recommendations was missing a crucial point: Last July, the first recommendation called for the independent investigation of KCPD for all cases of excessive use of force and all public complaints against the department.

Compromising and narrowing previously asserted goals was a common theme throughout the presentation. After months of data collection, discussions, and processing, the presentation lacked any sense of conviction, nor commitment to measurable resolution.

The moderators for each of the listening sessions—Rev. Bob Hill, minister emeritus of Community Christian Church, and Marjorie Williams, the former Hickman Hills superintendent—presented the coalition’s findings.

Hill and Williams emphasized that the community responses overlapped at a rate of 60% with those of the KCPD. Both groups valued honesty and integrity, transparency, and crime reduction.

While these crossover responses covered some bland, surface-level evaluations of our city’s structural failings, the points where feedback differed highlighted more interesting divisions in preferred approach. About 58% of surveyed community members prioritized holding officers accountable while 39.5% of KCPD staff reported the same goal.

The presentation wrapped up with two separate word clouds pulled from frequently used terms on the surveys. The one open to the public was dominated by “community,” “accountable,” “crime,” “policing,” “citizens” and “trust.”

The KCPD word cloud, generated from the open-ended response section, featured “community” (billed as proof that the public and the department are seeing eye to eye!), “chief,” “department,” “members,” and “police.”

After months of collecting surveys and conducting listening sessions, watching a presentation that culminated in the kind of assignment one might be required to turn in for an 8th grade assignment was depressing, to say the least.

You can read the community feedback report, with extended information not addressed at the meeting, via this link.

Members of the Board of Police Commissioners had few questions for the coalition. If anything, they appeared lukewarm, despite their polite applause for what Reardon described as the “incredible results” presented.

Coalition members say they aren’t finished yet. They will continue meeting and advocating for citizens’ perspectives to be taken into consideration in the selection of the new chief.

“The people have spoken, and we will all be watching,” Hill says.

What, exactly, they will be watching for—and what action they will take—remains unclear.

With such lackluster output after such intense input and effort, we’re left with the same questions we had when the project was announced: What is this supposed to accomplish? Who is this for? Will anyone listen to this? Will we get any insight into how this city heals an institution that has done so much harm while giving so little back? Does the city trust politicians and the police enough to participate in this process? Will this data evaluate the successes and failures of the attempts to reform KCPD over the last few years?

Upsettingly, after today’s results presentation, the question that best sums up everything we’ve seen, and the context of how it was delivered, is quite simply: “So what?”

Someone in this process, we are asking you to find a way to please prove us wrong.