Hell to the Chief

Our police chief is drinking from a poisoned well. But Rick Smith isn’t going anywhere. 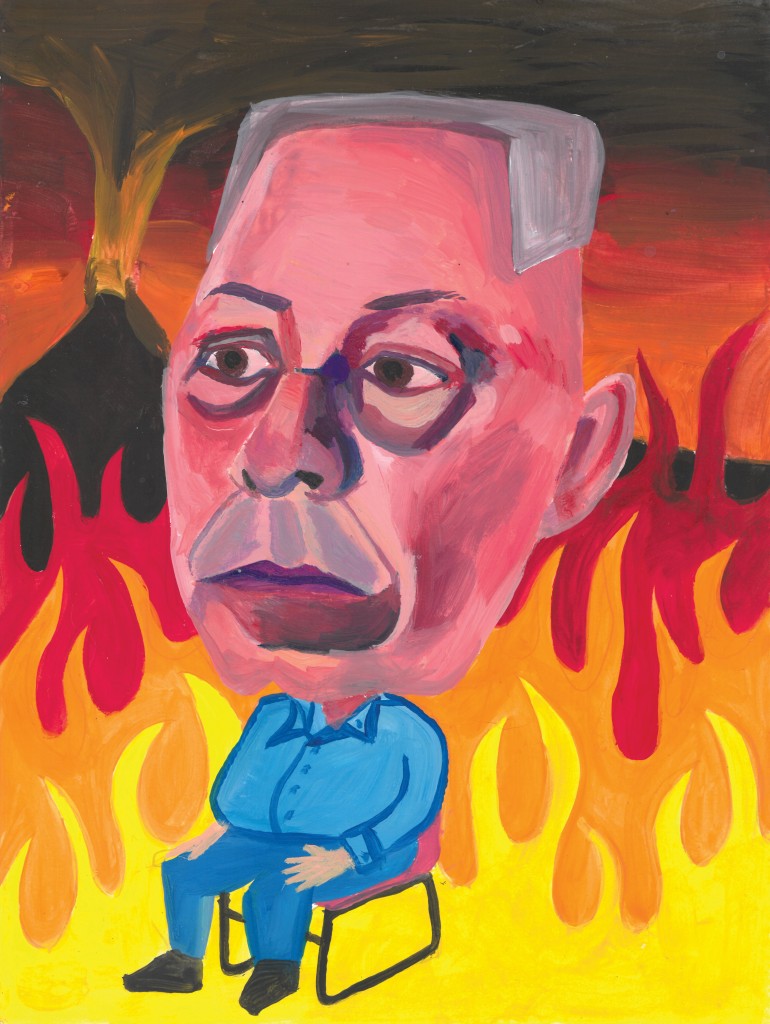 Kansas City’s police department has had five chiefs over the past two decades, not counting interim appointees or the current occupant. If you average out their tenures, a good expectation for time of service is five and a half years.

Current Chief Rick Smith will reach four years in August. It’s hard to see how either he or the city can hold out another year and a half.

The smoke-and-mirrors illusion of Kansas City having one of the nation’s best police departments has been smashed into bits over the last year or so—the latest blow being a “scorecard” that ranks the department 495th of 500 nationwide.

Police Scorecard doesn’t pretend to be an academic study, and its creators acknowledge that their scoring is based on a set of “common principles”—such as not arresting people for low-level offenses—which lean toward a progressive mindset.

But the scorecard used police departments’ own data to make comparisons about funding, use of force, and unsolved crimes, and the information it contains is important.

The scorecard found that Kansas City police killed 32 civilians from 2013 to 2019—a rate of four fatalities per 10,000 arrests, which is higher than 98% of departments.

“Once police decide to make an arrest, they’re more likely to use deadly force in Kansas City than almost any other city in America,” the scorecard’s creator, Samuel Sinyangwe, said during an appearance on KCUR’s Up to Date talk show.

Those deaths—and other brutal cop actions caught on video—claw at Kansas City’s Black and brown residents, its young people, and older leaders in a way that I’m not sure the chief and his supporters understand.

When you see news footage of teenagers being tear gassed, as happened during last summer’s protests on the Plaza, or you see video of an officer thrusting his knee on the back of a very pregnant woman lying on the ground, those images stick. When police move into a neighborhood and shoot someone, people don’t forget.

And when the police chief is silent, or when he refuses to remove officers who have been accused or even charged with crimes while on the job, whole segments of the community stay angry.

“I think things would be different if indeed he was willing to condemn the behavior of those who have been accused,” says Damon Daniel, president of the AdHoc Group Against Crime.

It’s not that Smith doesn’t care about Kansas City and public safety.

“I want Kansas City to get out of the top 10 most violent cities,” he tells me, referring to FBI Uniform Crime Report rankings. “I think that’s a terrible stigma for Kansas City and our community.”

He ticks off some of the things the department is doing to win hearts and minds, like bringing back community relations officers, holding summer youth camps, and hiring social workers in police stations.

“So it’s not just about enforcement, it’s about those other avenues too,” he says.

But Smith tells me that, just before we talked, he sat in on a meeting with commanders to discuss shootings.

“We were talking about an incident where there was a retaliatory shooting on a house and there were a hundred shell casings in the front yard,” he says. “A hundred. Does anyone grasp the amount of firearms and amount of shooting that takes, and the amount of time it takes to shoot a hundred rounds at someone?”

This is what his officers are up against, Smith says. He talks about this level of threat when I ask about the community anger over shootings and use of force incidents.

“I think we do everything we can to try and train, to not have to shoot somebody,” Smith says. “But the amount of times we encounter people armed with guns is way out of proportion to what it was when I first came on 35 years ago. And we are going to be engaged with people who are violent at times, and they’re violent towards us.”

Fair enough. Kansas City is awash in weapons, and the role of the police in confronting armed, violent criminals cannot be understated.

But some of the citizens that Kansas City police officers have been accused of treating brutally include a pregnant woman, a transgender woman, and a 15-year-old boy. An officer fatally shot a 47-year-old man who was trying to flee after being stopped for a minor traffic infraction. Another officer shot a man as he sat in a pickup truck in his own backyard.

Smith says he’s terminated police officers in the past. He doesn’t want to give a number, because, he says, that will give critics yet another reason to sling arrows at the department.

“I am trying not to fight people,” he says. “I understand I’m the focus. But if you notice, I haven’t publicly said a bad word against any of the people who have said things against me. And I don’t plan on doing that. My plan is to run the organization, and to give this organization and this city the best police department possible. That is my goal.”

Smith was sworn in as chief Aug. 15, 2017, following the abrupt retirement of his predecessor, Darryl Forté. Although respected by many in the community as Kansas City’s first Black police chief, Forté, now the Jackson County sheriff, reportedly had become increasingly withdrawn and mercurial within police headquarters. Morale was low and the Board of Police Commissioners wanted a change.

The board narrowed its search to Smith and two candidates from out of town. One candidate withdrew from consideration at the last minute, leaving Smith and Keith Humphrey, the chief in Norman, Oklahoma, as the finalists.

The police board Chairman at the time, Leland Shurin, and then-Mayor Sly James voted for Humphrey. The other three commissioners voted for Smith, including Nathan Garrett, who only a few weeks before had replaced Alvin Brooks on the board.

Smith held the rank of major at the time. He had three decades of service in the department.

“When Smith came in, people were thrilled,” says Betsey Solberg, who got to know Smith through her work as chair of the Kansas City Police Foundation, and remains a supporter. “They thought he was honest and trustworthy. He was, and I think still is, really popular with the officers.”

Not everyone was excited, though. Civil rights and social justice leaders worried about Smith’s close relationship with the local chapter of the police union. Jean Peters Baker, the Jackson County prosecutor, was dismayed about Smith’s lukewarm support of the Kansas City No Violence Alliance—a violence reduction program that had shown initial success, though it later struggled.

Smith questioned the program’s usefulness as a major and dismantled it when he became chief. He says the department is working collaboratively with the prosecutor’s office, federal law enforcement agencies, and community partners in something called the National Public Safety Partnership, although few people in the city know what that is.

Neighborhood groups and others began complaining soon after Smith’s appointment that he wasn’t as visible as Forté, who had made a point to be present in crime-impacted neighborhoods.

Concerns mounted in June 2018, after police officers fatally shot three people on the same day. Smith told reporters the officers “did what they thought was necessary.”

“I just wanted people in this city to know our officers are dedicated to go out here and protect the citizens of this city,” he said.

But where Smith sees officers protecting the people, others see a chief defending the force at all costs.

The gathering resentment bloomed into full outrage last year after cops used tear gas and rubber bullets on protestors after a police officer murdered George Floyd in Minneapolis. Calls for the chief’s resignation have continued ever since.

Smith says he has no plans to resign. “My philosophy is I want to work and spend time running this organization,” he says. “And this is what I feel like I’ve been hired to do, is to make sure this organization runs well.”

Maybe he’ll stay. The man is stubborn. And he is for the moment protected by a group uniquely immune to community pressure: the state-appointed Board of Police Commissioners.

But police chiefs tend to leave abruptly in Kansas City. And so it is worth thinking for a moment about a police department without Rick Smith.

There is no quick fix. Kansas City’s police department is governed by a board whose members, except for the mayor, are elected by the Missouri governor. And the current governor shows a stunning disregard for the city’s priorities and problems.

The department’s administration and police board have spent years bathing in self-congratulation and seem bewildered by criticisms. Police officers have become accustomed to a chief’s protection; the resistance to anyone who changes that pattern will be fierce.

Gwen Grant, president of the Urban League of Greater Kansas City and one of Smith’s fiercest critics, wants the chief to be replaced with someone from outside.

“I think it will require a strong person with high-ranking law enforcement experience,” she says. “A person who will subscribe to more progressive forms of policing. I don’t think that person is here in Kansas City.”

But talk of Smith’s successor is premature. He says he wants to work with the community.

“I think we all want the same things,” he says. “We all want to save Kansas City.”

The time for alliances has probably passed.

“He needs to be gone,” Grant says. “He doesn’t have the kind of relationships where he can say, ‘we as a police department hear you and we need to make some changes.’”

The well has been poisoned. The question now is how long Chief Smith and his bosses on the police board are willing to drink from it.