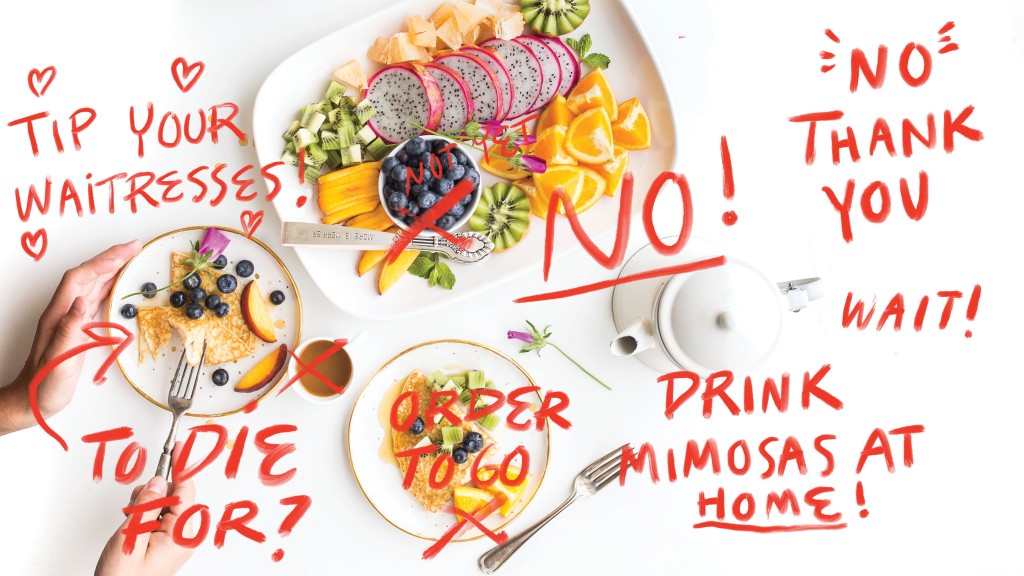 Mimosas to die for? // Illustration by Katelyn Betz.

I’ve been fielding a lot of questions about when I’m going back to eating in restaurants. I usually give one of two answers, both equally true: “When we get our collective shit together” and “Not for a long time.”

On May 15—the day Kansas City restaurants reopened for in-room dining—the metro reported 64 new cases of COVID-19. The day I’m writing this—July 15—the metro reported almost 300. [Editor’s note: on August 6, the day of online publication, the number of new cases reported was 396].

Real cities have curves, I guess.

Since Kansas City reopened, multiple local restaurants, bars, and bakeries have closed down again due to COVID-19 cases among staff. Servers posting on a local restaurant job board say they’ve been ordered to come in for shifts while they wait for the results of their COVID tests. We have a mask ordinance as of this writing, but we also have restaurants unwilling to follow it and customers screaming and flashing guns at those who do. Our state-elected officials are throwing tantrums about their “constitutional right” to eat in a restaurant without wearing a mask. And the positive test rates in Kansas and Missouri are still well outside the World Health Organization’s threshold, suggesting we’ve yet to capture the true scope of the spread.

Meanwhile, restaurants are posting reopening notices assuring us they’re sanitizing their salt and pepper shakers. The biggest transmission risk isn’t surfaces—it’s people, and the viral droplets spraying from their beautiful human faces while they talk and laugh and cough and chew. Most of the promises from restaurants of “deep cleaning” and sanitizing and “air scrubbing” amount to little more than security theater. And many of the people tasked with putting on the show aren’t buying it.

“The nature of a restaurant is that it’s such a breeding ground [for infection],” says Tom Butts, a veteran server at a well-known fine dining restaurant (he asked that I not name the restaurant). “You’re talking about taking these measures that might be effective in the front of the house, but they’re certainly not going to be effective in the back of the house. The kitchen is always tiny, it’s always hot, you’re always slamming into each other, and I just don’t think there’s much you can do to lower the risk.” 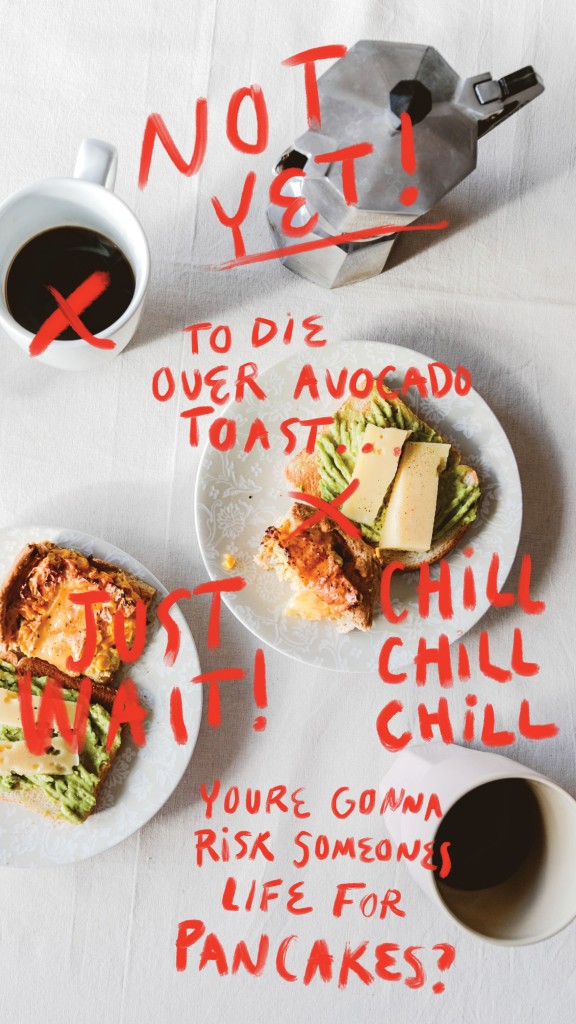 Butts returned to work in June when his employer reopened the restaurant for in-room dining. He resigned after three shifts, citing dehumanizing interactions with maskless customers and safety measures that amounted to “window dressing.” He says two other multi-year employees of the restaurant left the same day.

“If you talk to servers, most servers would tell you, ‘I’m not going to eat out, are you crazy?’” Butts says. “That should tell you a lot right there. We’re the canaries in the coal mine, and the canaries do not want to go down in the mine.”

One bartender at a Crossroads hotel (quoted on condition of anonymity) agreed. “It would make me feel more comfortable if patrons actually gave a shit,” he says. “No one seems to actually care. I wish I had a bull horn I could blow every time someone violated social distancing. I had one dude yell at me saying that he doesn’t know a single person who’s had coronavirus. It’s crazy that these people push for us to open the economy back up and then tip us like shit and treat us like shit. I hope we shut back down.”

I hope so, too, though I’m not optimistic. We’ve shifted the burden of public health decisions from elected officials to business owners who have an enormous (and understandable) financial incentive to keep us in the booths. And so the question of customer behavior has shifted, too, in a predictable direction. A month ago, when COVID-19 cases were far lower, we were asking ourselves, “Is it safe to eat in restaurants?” Now, we’re asking, “Will they survive if we don’t?”

“Restaurants were kind of forced to be open,” says Sienna Hansen, a 15-year service industry veteran. “It’s a weird thing to be an ‘essential worker’ and also think: Why? What am I doing this for? I’m not a nurse. I’m not helping someone get through an illness. I don’t feel like I’m doing anything brave by waiting tables, and that’s a tough psychological thing.”

Hansen left her serving job at Café Provence in Prairie Village when she was called back for dine-in service. Hansen’s in-laws are in their 80s and in poor health, and she was concerned about exposing them to the virus through her work. She says the restaurant was respectful of her decision, but she also expressed frustration at needing an excuse at all. “Younger people are in critical condition in ICUs. People are worried about their own health as well.”

I’m a critic, not a reporter, which means I’m allowed to be a prescriptive scold. So here we go: At a time when cases in both Kansas and Missouri are spiking, none of us should be eating indoors and putting low-wage industry workers without health insurance at risk. None of us should be sipping mimosas and deluding ourselves that a 25 percent tip can in any way course-correct for a tiered system of humanity that forces the people least equipped to bear the costs of a viral pandemic to serve as personal risk sponges for wealthy lifestyle dilettantes.

And for what? For brunch?

Fuck brunch. Fuck chef’s tables and omakase feasts and the resurgence of transactional media tastings. Fuck “returning to normalcy.” Nothing is normal. Fuck “the hustle,” when “the hustle” is code for telling the canaries to shut up and sing.

There’s a tendency, especially among well-meaning civic boosters, to look at the mess we’ve created and decide that participating in it is the only way we can help—that throwing workers and business owners a few bucks while they risk their health and safety is “better than nothing.” Is it though? Even after the reopening, multiple restaurants and bars have closed permanently due to lost revenue. And many prominent industry voices who agitated for large-scale solutions during the shutdown have fallen silent as they redirect their energy to daily survival.

If you push someone out of an airplane, handing them a paper drink umbrella for their descent is not “better than nothing.” It will not stop them from being jelly on the pavement. Anything other than a parachute is insufficient. Irrelevant.

Get it to go. // Illustration by Katelyn Betz.

Fuck paper umbrellas. Fuck the fundraisers for hospital bills and endless calls for a la carte giving that will stand as ghoulish monuments to our collective failure to protect one another. Since the pandemic began, I’ve donated to hospitality funds, virtual tip jars, and a GoFundMe for a local service worker stuck with sky-high bills after his wife died of COVID-19. Let me be clear: each one of those is a policy failure. Affordable health care and subsistence living should not be doled out at the whims of benevolent patrons.

Fuck the profound failure of imagination and political will it takes to look at an unprecedented global pandemic and economic collapse and think “business as usual” is in any way sufficient. The hospitality industry held out an open palm, and we gave them the cold cruelty of the invisible hand. An economy founded on the principal of beneficent self-interest cannot function when our self-interest is in staying at home. We will not “fix” this fear until we fix the conditions that created it.

Restaurants and industry workers need major government interventions, not bland “rise and grind” axioms. Restaurants need money, not customers. But federal elected officials would rather choreograph a fusty economic gavotte and teach the country to dance than entertain the obvious solution: pay restaurants to stay closed and pay employees to stay home. Our problem isn’t that we don’t know what to do. Our problem is that we don’t want to do it.

The National Restaurant Association and Independent Restaurant Coalition are still agitating for federal relief, including the Restaurants Act, which would in part create a $120 billion recovery fund for restaurants. We could extend the additional unemployment benefits under the CARES Act (due to expire July 31) that have allowed hospitality workers to keep paying their bills on furlough, and we could waive job search requirements for these benefits understanding that workers have a job that they want to return to when it’s safe.

Yes, these interventions will be costly. No, they will not be more costly than watching the businesses that make the city livable die. But the costs of our apathy will be intermittent—a shuttered James Beard-nominated restaurant one week, a Subway in our neighborhood bar the next—and so we will fail, as we always do, to account for them.

Do I sound like a pessimist? Do I sound like I need a drink? Have one in my honor the next time you’re out. I’m a big fan of tiki cocktails. I love the kitschy paper umbrellas with their toothpick skeletons and comically fragile shades. Enjoy the anesthetizing pleasure of a Sunday morning buzz. Kick up your feet. Have a good brunch. Your server will be with you in a moment.