R.I.P. to radio station The Buzz as we knew ye 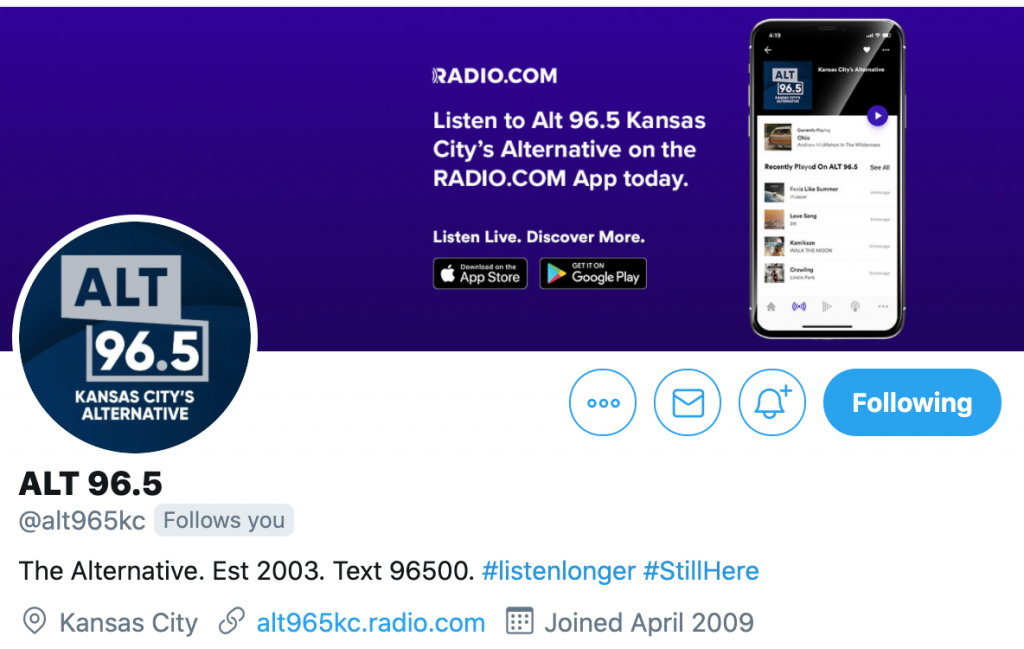 After the announcement last week that radio personality Jordin Silver had been axed from The Buzz amid budget cuts, the metro wakes this morning to discover that the channel no longer exists in its previous form.

As information is starting to come in, it seems that the entire station has undertaken a rebranding. All social media accounts now list the station as simply “Alt 96.5.”

Early reports from RadioInsight indicate that amid the mass lay-offs, there will be a number of syndicated shows spreading to fill regional gaps.

KRBZ rebranded after Entercom initiated airstaff cuts at their country and alternative formatted stations nationwide. KRBZ will air Stryker & Klein from sister KROQ Los Angeles for mornings, and Kevan Kenney from WNYL New York City for nights. “The Church of Lazlo” will remain in the afternoons, and will be syndicated to sister stations in Dallas and Las Vegas.

This will be updated if we learn of further shows/hosts that have been released or kept.

KC responds to the massive shift, with a mix of pleasant send-offs and concerns about what we’ve lost.

I can’t tell you how many times hosts on The Buzz let me come on their shows to drink beer and chat over the years, but it was a TON! Thank you all for being champions of the great things happening in Kansas City over the past two decades. You mean a lot to this city.❤️

Yo! You guys wanna hang out around 2?? Have a drink. See what happens? #justfuckinglisten pic.twitter.com/UFxcdGXkdM

A fitting tribute to the end of 96.5 The Buzz from the one and only @heady_chris. Feeling some tough nostalgia today. https://t.co/kUyG9S0Zgh

Still feeling sentimental, so… thanks @lazlothebuzz @slimfast965 for being a constant in my life from teens to now. @Jeriney for making me realize how awesome local music is. @hartzell965 for being a good friend and officiating my wedding. Here’s to nearly 20 years of the Buzz!

I’ve lived lots of places and listened to a lot of radio stations. None felt like home like 96.5 The Buzz. Thanks for everything (Photo of Beach Ball 2016). pic.twitter.com/bH1QB6Orku

The Buzz certainly wasn’t what it was a decade ago but it still had plenty of good segments and on-air talent that brought in some great bands to the city. The death of the radio station as we know it is a massive loss to the city and I’m sad to see it go

Listened to the buzz going to and from school as a kid 20 years ago and to and from work as an adult now. Good luck to everyone and thank you for so many good years/times/concerts

RIP 96.5 The Buzz you gave me tons of fun and entertainment but it was time for a change. HOWEVER the removal of the local stuff is a travesty. Local bands are going to struggle hard post covid and seems like there is no place in KC for them to get noticed.

while I don't know the specific details, I'd gather the buzz getting gutted is because of not turning the "right" amount of "profit."

I hope in this economic turmoil we can find models that better value workers with stability & wages. And value quality work beyond excess profit.

Ok, it’s 3AM, & my 4-yo son is up & lonely (can’t sleep). I should stop thinking about the end of 96.5 the Buzz. I have just one more thing for the ORIGINAL #buzzfamily from the early alternative/emo days.