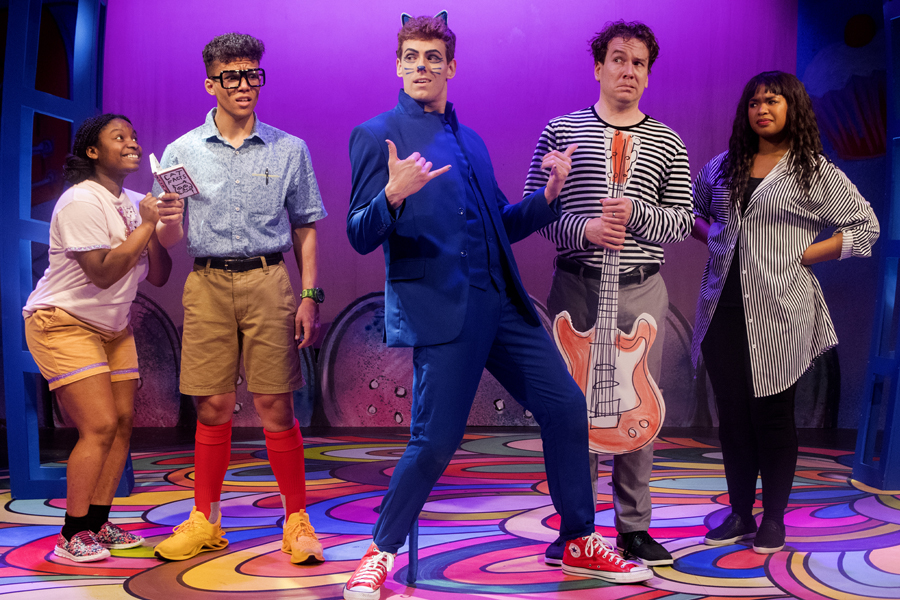 Left to Right: Amari Lewis (as Olive Biddle), Lucas Lowry (as Jimmy Biddle), Noah Lindquist (as Pete the Cat), T. Eric Morris (as Dad), and Bri Woods (as Mom) in The Coterie’s production of Pete the Cat. Live on stage March 29-May 22, 2022. Photo by Jim Vaiknoras and courtesy of The Coterie Theatre.

One of the perks of this job is the unpredictable nature of your schedule. Not just in terms of when news will decide to hit, but in terms of where a local cultural publication will wind up taking you. Last night, I saw a children’s musical about a rock’n’roll cat. Tonight, I’m going to watch a DJ throw a huge dance party, and pretend that I’m still in any condition to dance the way I used to. Tomorrow, I’m seeing a performance piece about the Holocaust. Somewhere in betwixt all that, there’s a movie premiere and a soccer game.

Saying “Yes!” to everything that KC has to offer can instill the most glorious sense of whiplash. 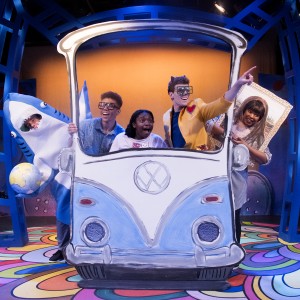 Left to Right: T. Eric Morris (as A Shark), Lucas Lowry (as Jimmy Biddle), Amari Lewis (as Olive Biddle), Noah Lindquist (as Pete the Cat), and Bri Woods (as The Mona Lisa) in The Coterie’s production of Pete the Cat. Live on stage March 29-May 22, 2022. Photo by Jim Vaiknoras and courtesy of The Coterie Theatre.

Before my brain resets to process the next cultural-emotional curveball, I would like to take a brief moment to just celebrate one of my most unexpected new favorite venues: a small children’s theatre buried in the corner of a mall, where it isn’t even the only live theatrical venue in said mall.

I’m speaking of The Coterie, housed at Crown Center.

Of all the theatre companies in town I expected to find a constant surprise from, the theater for kid’s shows was not atop my list. And yet, here we are, with me again singing their praises.

My first good look at what makes Coterie so special stemmed from some interviews around their production of The SpongeBob Musical. You can read my write-up here, but the short version is that doing regional productions of any theatrical production requires layers of permission, just to make a single tweak to a line. And Coterie has become the home to creating game-changing adaptations, that are then re-created across the country.

SpongeBob as a musical hit Broadway a few years ago and, as you can read in my piece, features original songs from nearly every hit artist in the last decade. That also resulted in a two-and-a-half-hour show, with Broadway ticket prices. Coterie’s team asked, “Hey, could we do like a 55-minute version, that abridges the plot but makes it work for its intended audience—kids that absolutely cannot sit through a show that long?” And they’ve done wonders with that, amidst other similar adaptations.

Last night, I got to see their version of a Pete the Cat musical. I’m starting to see some of the same performers from other Coeterie productions, and have no choice but to recognize that some of the most talented musical theater in the city is coming out of this little black box where I was one of the oldest people in attendance, and (frustrating) one of the only ones without glowing cat ears.

[They did not fit on my head. This is not Coeterie’s fault.] 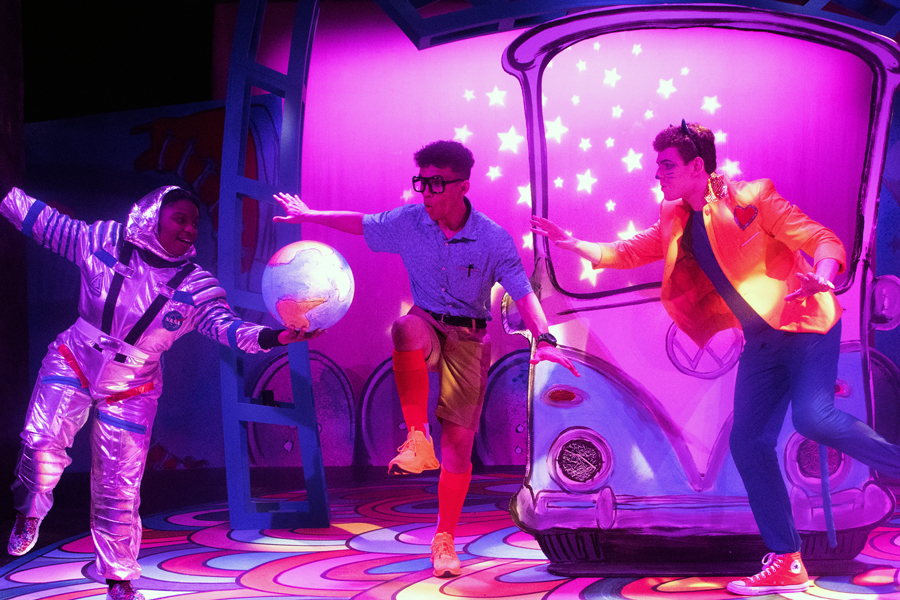 Left to Right: Amari Lewis (as Astronaut), Lucas Lowry (as Jimmy Biddle), and Noah Lindquist (as Pete the Cat) in The Coterie’s production of Pete the Cat. Live on stage March 29-May 22, 2022. Photo by Jim Vaiknoras and courtesy of The Coterie Theatre.

While SpongeBob had more of an all-ages spread, this musical adaptation of the kid’s book series was mostly very, very young kids and parents. Which tracks, because I’ve somehow never heard of Pete the Cat before. And that’s fine because I learned a lot.

The five-person cast, all rotating among a variety of roles, took us on a journey of self-discovery which ignited the kind of childhood madness that I haven’t experienced since pre-COVID. There was lots of dancing in the aisles, screaming along to songs, waving at familiar cartoon animals come to life, and just a general joy for life.

Pete the Cat is basically Mick Jagger, but y’know, as a cat. He has a band with a toad and an octopus. When the local animal control captures him, he’s forced to become a housecat, and quickly both ruins the lives of all involved, but equally invites them to expand what they believe they can be.

It was cute as hell. It was a neon-drenched spectacle that did all the right things. More so, I just lost my shit throughout. As a show meant for very young kids, it has all the sexual innuendo and homoerotic tension you would hope for from a David Bowie stray cat musical. From start to finish, the less-than-hour-long show conveys the air of an episode of The Mighty Boosh in its willingness to play with madness. And throughout the entire run-time, a four-year-old in a mask sat behind me making raspberry/fart noises with his mouth, and I just could not ask for any more pure form of entertainment.

Aforementioned though, this is less a recommendation about going to see the show without a young family member. To be clear: kids will lose their minds. For adults, this doesn’t have the crossover comedy that would make it worth your trip. But whether it’s this or a Harry Potter musical or something about living in a pineapple under the sea, the small casts here at Coterie are just talented beyond all measure—especially in terms of bringing the energy and skill night after night to a form of the live performance genre that doesn’t get enough love. And that’s why I’m finding that each of their upcoming shows is getting marked on my calendar.

Noah Lindquist, Lucas Lowry, Amari Lewis, Bri Woods, and T. Eric Morris put forth a tour de force of energy, that left me both riding high for the rest of the evening, but also home from a 7 p.m. musical by 8:30 p.m., creating confusion for me and my wife of what to do with the rest of the night.

It would be easy for newbies to excuse the Coterie as not being for them. What I’m learning is that I might be one of their biggest fans. And it is well earned. 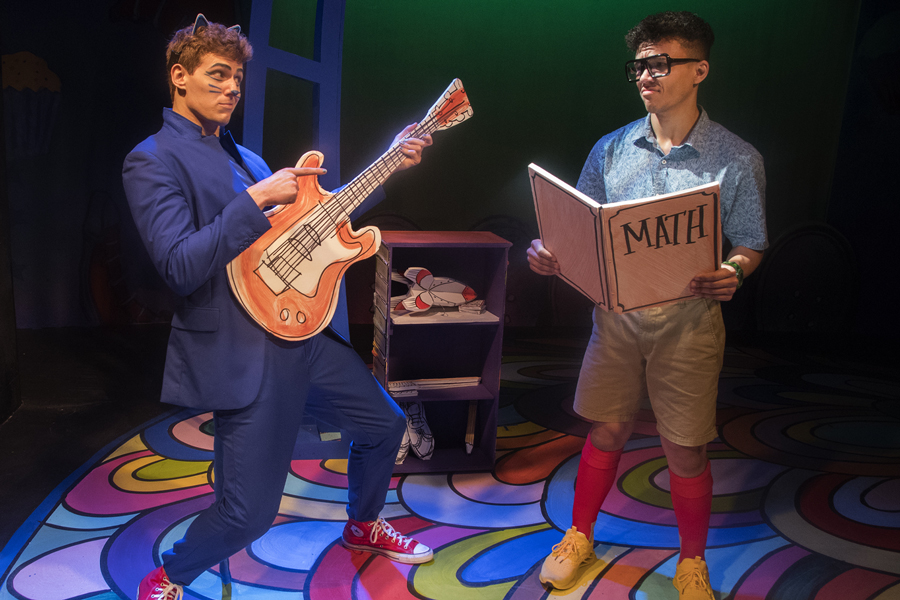 Left to Right: Noah Lindquist (as Pete the Cat) and Lucas Lowry (as Jimmy Biddle) in The Coterie’s production of Pete the Cat. Live on stage March 29-May 22, 2022. Photo by Jim Vaiknoras and courtesy of The Coterie Theatre.