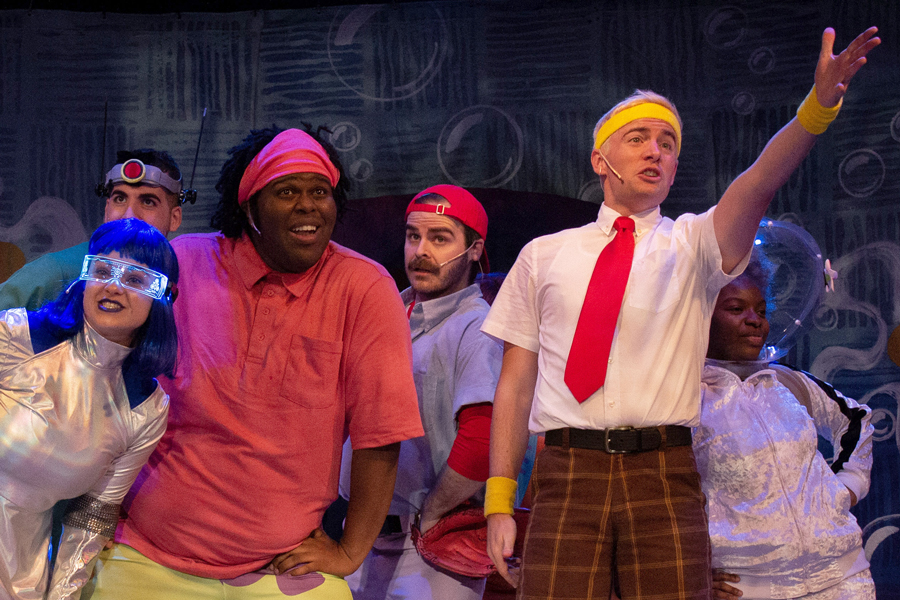 The Coterie’s world premiere of The SpongeBob Musical for Young Audiences. Live on stage, November 5, 2021-January 2, 2022. // Photo by Jordan Rice

He lives in a pineapple. Where? Why, dearest friend, it is under the sea.

America’s favorite sentient sponge has taken to the stage for a production of the Broadway hit The SpongeBob Musical, now playing the Coterie Theater.

If you’ve followed the arc of this show’s existence, you’ll know that a stage musical based on a Nick children’s cartoon, no matter how long-running, seemed to achieve praise far outsizing what one would expect of the subject matter. But pull back the curtain, and you’ll see the list of artists the contributed original songs for the show. To shed a little light on the hype, here’s a quick list:

Right, so. Some names got together to make this work. This doesn’t even include licensed songs from folks like David Bowie, nor the pile of original numbers from nerd-rock icon Jonathan Coulton.

The end result was a Broadway smash hit. But that show also ran nearly two and a half hours. While the production was conceived for “all audiences”, this runtime far exceeds the attention most children can afford. [Me either, for that matter. The songs rule but I don’t have Lord of the Rings blocks of attention left in my frontal cortex these days.]

This is to say nothing of the cost of Broadway tickets for the entire family.

With that in mind, The Coterie Theater here in KC decided to bite off the near unheard-of with their production. They adapted the show from two and a half hours down to a child-friendly 70 minutes and lost very little in the process.

This is all thanks to the incredible work of The Coterie’s own Jeff Church. The work that he’s done here will be replicated nationwide. If you don’t know theater rights, then you might not know what an unheralded victory this is.

Traditionally, you need to get rounds and rounds of permission from the show’s creators and publishers in order to do so much as change a line in a production. But Church and company have made a career out of daring to say, “Hey, can we completely rewrite your work and cut its runtime in half?”

And they keep getting told “Yes!” for good reason.

“It kicked our ass in all the right ways,” Church tells The Pitch by phone. “Putting out the first edition of something adapted from this scale—getting a crew together that could pull this off—it would seem like a miracle if this wasn’t what we’re best at.”

“This all began back in 2004 when we took on Seussical,” Church says of the blockbuster success story of the Dr. Suess musical. “It was the same kind of situation. There was a huge Broadway hit, and we were the ones to step up and ask if we could make a version that kids could process.”

Seussical was eventually adapted into four different shows, ranging from the full-length runtime down to a mere 30-minute version, for very young audiences.

Church mentions that they never refer to what they perform as “children’s theater” these days.

“It’s nothing but professionals working on this,” Church says. “The term makes people think of something much lesser, and no, it’s just very high-quality work for a more specific audience. We just understand that you can’t have more than a ballad or two in a show, or kids start to wiggle on you.”

So how does one start to propose the sort of full make-over of a production in an industry where minor tweaks are verboten.

“We had to send Nickelodeon an outline, and one to the music team,” Church says. “We worked a lot with Zach Faust of Faust Theatre, who really knows the cartoon. Zach was a huge part of making this soar.”

After working on tweaking the show’s story, seeking approval, and trying to figure out how to adapt the music for a small theater, approval finally came down from the big names. That approval came in July. Which meant that auditions couldn’t begin until August. Which meant the first rehearsals for a brand new show (opening a month later) would begin in October.

The SpongeBob Musical for Young Audiences was officially a go.

“Pandemic represents why so many talented people in this group were able to participate,” Church says. Without the pandemic, many of the stars would have typically been booked months and months out. The same thing goes for the team creating the backing tracks required to replace a full band, to accommodate a small Kansas City theater space.

There are things about our finished show that felt very prescient.

“The fear of this volcano in the story killing everyone,” Church says, “and the people in Bikini Bottom who don’t believe in Sandy’s science—and think they can be okay if they just ignore the volcano. All of that led to some of our staff choking up when they first saw it. It just feels important in a way you wouldn’t see coming.”

The SpongeBob Musical for Young Audiences runs through Jan. 2, 2022 at The Coterie at Crown Center. Tickets are available here.