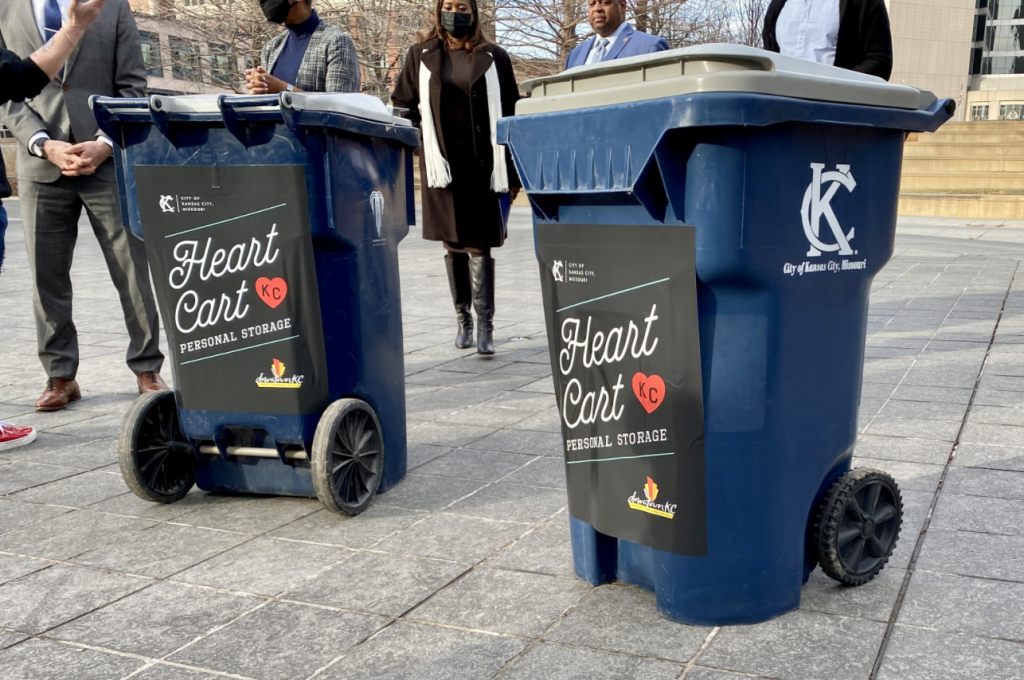 A few of the first bins at a press conference. // Courtesy City of KC

The Downtown Council and Kansas City’s Parks and Recreation Department have announced efforts to protect the city’s unhoused population as the winter season ensues.

Nicknamed “The Heart Cart,” the city has allotted 70 blue, 30-gallon bins for unhoused residents of the city to use for storing their belongings. 24 bins were made available to the public last week, with hopes to add another 50 by the end of this week.

While the exact location is being kept secret for safety reasons, the bins will be taken and protected near the city’s homeless shelters and similar organizations.

Those participating in The Heart Cart program will be provided an opportunity to add or remove items on Tuesdays and Thursdays. Caseworkers will be present to coordinate other services or schedule appointments, and keys will be granted to each client. A backup visual system is in place, should the bin’s owner misplace their key.

“This is a great way to give people experiencing homelessness peace of mind and a dignified way to store their possessions,” Wallace James, human services coordinator for community improvement districts, says.

The program—part of the city’s Extreme Weather Activation Plan—looks to protect houseless individuals’ belongings and alleviate the troubles of having to transport possessions in the event of harsh weather.

Storing belongings presents a unique challenge for the unhoused.

Most local shelters only permit clients to retain a single bag, forcing residents to choose between leaving their belongings behind or staying elsewhere—often outside. Carrying multiple possessions also creates a sizable barrier to interviewing for work.

Although recent experiments in the city’s approach toward the housing crisis have yielded uneven results—such as the hotel initiative for the unhoused—this program has proven productive in other metros. The 2016 bin program that Los Angeles instituted for the Skid Row neighborhood was seen by the community as a success, and in 2021 a citywide expansion was undertaken.