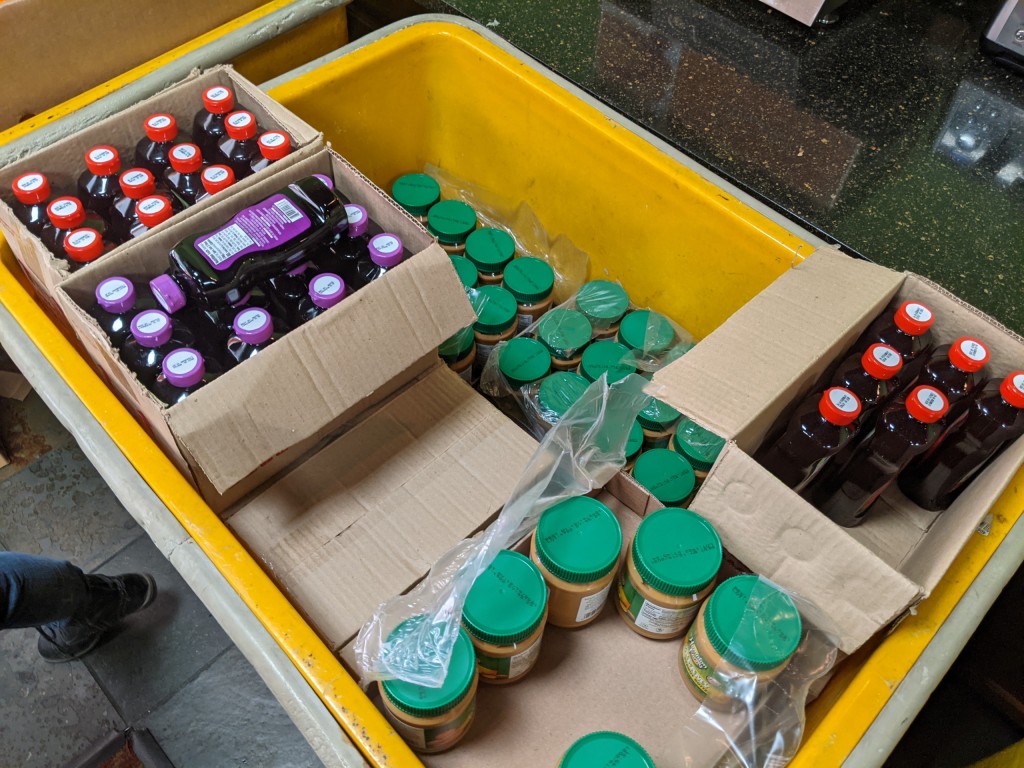 One shipment of dry goods provided to a hotel by Harvesters. // Photo by Bek Shackelford

After an extension, Kansas City’s hotel initiative to provide shelter for nearly 400 unhoused people ends today. There is no transitional housing solution currently in place following the hotel initiative. Many of the people who stayed in the hotels for nearly three months will now be going to shelters run by nonprofit organizations. Many will be back on the street. Without a transitional housing solution in place, many will continue to suffer from the everyday struggles of houselessness as well as the perpetual threat of camp sweeps.

According to Chris Hernandez, director of communications in the office of the city manager, the hotel program helped almost 350 people connect to housing services providers, 120 sign up for first-time benefits, and 220 people receive medical care. Additionally, nearly 20 people received critical medical treatment for potentially life-threatening ailments, and a baby was born safely.

“We have worked to resettle folks,” says Mayor Lucas. “We have found housing for 70 families, we have identified 200 spaces for people to transition to. They are shelters, but I think that we can say confidently that we are not crafting a program that is just putting people back out on the streets.”

Still, there were issues with managing the hotel initiative and an overall lack of organization. Some unhoused people were moved from hotels without warning. Meals were not sponsored and relied on the effort of volunteers and donations from area nonprofits.

Janessa Riehle, coordinator of KC Blanket Drive and one of the many who stepped up to help run the Kansas City Hotel Initiative, says that Hope Faith was originally supposed to help back the initiative but dropped out a few days in. The city tapped Lotus Care House to run the program, which coordinated the volunteer efforts.

Volunteers were the ones who brought food and supplies to those living in the hotels. Riehle coordinated with Anton Washington, who helped with the Bartle Hall warming shelter, and Nellie McCool from Free Hot Soup.

“Anton had the government connections from being a member of the Mayor’s Houseless Task Force, Nellie knew how to feed hundreds of people and how to bring in the volunteers, and I knew how to formally organize a plan and a system,” says Riehle.

The team worked closely with Alfredo Palacol, executive director of Lotus; Marquee Watson, executive director of the Greater Kansas City Coalition to End Homelessness; City Manager Brian Platte; Assistant City Manager Kimiko Black Gilmore; and Councilwoman Ryana Parks-Shaw. The team advocated and fought for the unhoused and the ability of the volunteers to help and were overall a big help, according to Riehle.

Today, as the unhoused are being relocated from the hotels to shelters or camps, there is little help with transportation. Riehle said that a team of volunteers has had to coordinate transportation with little warning. So far, the city sent only one KCATA bus to shuttle people from one of the several hotels to a shelter.

Riehle stresses that they aren’t looking for sympathy, but for meaningful change. She says people need to lean in, volunteer, and be active in their communities before judging the unhoused or making assumptions about their abilities. After all, we are all closer to homelessness than we might think.

“The program might be ending, but this is just the very beginning,” Riehle says. “Our city is truly at a pivotal moment in advocating for the rights of the houseless and tenants, as well as the policing of the Black and Brown communities, and we are not stopping anytime soon. We are holding our elected officials accountable for how our tax dollars are being spent and how we are tired of it being spent in ways that truly do not benefit all Kansas Citians.”

Riehle wants the City Council, notably the city councilmembers who deride the unhoused at meetings, to end the dehumanization of the city’s unhoused. One recent example of that is Councilwoman Heather Hall claiming that a new transitional housing project would facilitate drug use, violence, and unsanitary practices—insinuating in her remarks that houseless people refuse to abide by arbitrary rules for housing.

“We need to understand that this is not a trickle-down system where these multi-million dollar facilities who make money for people staying unhoused or being exploited will solve these issues. Meeting folks in the middle, breaking bread and having those difficult conversations do,” says Riehle. “When our most vulnerable succeed, we all do, and that’s a fact. These folks don’t want a hand out, they want a friend and an opportunity to succeed, just like everyone else. We are not all that different. I ask for these City Council members to do that. The lack of humanity in the way that they speak about the unhoused is truly unsettling. It’s uncomfortable. Everyone deserves a safe, warm place to rest their head and we will not stop fighting until that is met.”

Mayor Lucas, who was once houseless, says the issue boils down to deciding who we want to be as a city and addressing this issue with the urgency it demands.

“I would hope that instead of deriding the homeless and suggesting things about their ability to use the restroom or do anything like that, which I think we have unfortunately heard a lot of, we would spend time on saying, ‘how can we try to create real lasting opportunities,'” says Lucas. “Not just in one part of the city, but in every part of Kansas City. That’s what I’ll keep working on, even if it takes time.” 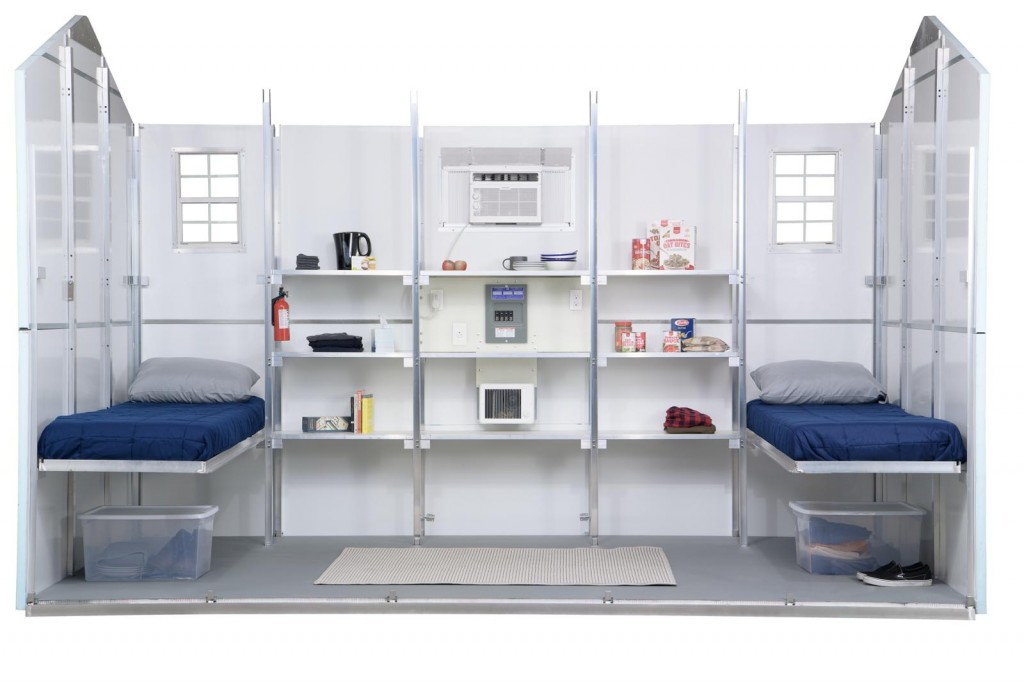 An example of a Verge pallet home. // Courtesy of The City of Kansas City

As a next step, the city proposed a tiny home village, called Verge, to build as transitional housing. The 64-square-foot shelters are made by Pallet, based outside of Seattle. Since its founding four and a half years ago, Pallet communities have been placed in California, Hawaii, Oregon, and Texas. If the ordinance passes, the shelters could be built in a matter of weeks.

Inside each tiny-home, people staying there will be provided with a mattress, sheets, pillows, and a care basket filled with toiletries and other necessities. They will have storage space to fit personal belongings, and facilities will be communal, instead of in the individual housing. In its first iteration, the community will be able to house 200 people and construction will be managed by Merging KC.

Verge will also include coordination of hot meals, caseworkers, food and clothing, dental services, haircuts, mental health and other health needs. There will be on-site classes covering money management, cleaning, cooking, laundry, and other life skills. These will be provided by a number of organizations in collaboration with the city.

In all, Verge will cost $1.7 million. The ordinance was set to be authorized by the Neighborhood and Development committee during the City Council meeting July 14, but it was held in committee. It has been rescheduled for the meeting July 21.

When considering the opposition to Verge, Mayor Lucas recalled a comment about the tiny-home villages being built for unhoused veterans that was made at the last City Council meeting—and the double standard council members hold when lauding VCP but hesitating about Verge.

“One of the gentlemen [at the meeting] asked, ‘Well, did you all like the tiny home villages for veterans? If so, what’s the difference?’” Lucas says. “We’re trying to decide if we can even use this as a plan. We have people that right now are living on the streets and don’t have access to resources.”

Lucas says that one challenge they have is that there is no one solution that fits all people. Some do not want to go to shelters, and others do not like the number of long-term solutions that the city is working to implement through the Department of Housing and Community Development.

“I think that’s a challenge of government sometimes, because we know we can’t craft something that fits for everyone,” says Lucas. “But we are certainly trying to make sure we do right by people, making sure that they have a place to go.”

“One of the hardest things about our jobs is the politics that relate to it. I think this is just a moment for the city to figure out what type of city it wants to be—what is the city and who is the city,” Lucas says. “It’s my view that I don’t want us to go back to the way things were done even two years ago, where the biggest story we had about how we addressed our homeless population was the health department pouring bleach on food. I think we’ve made great progress. I think there is a lot more progress to be made. But I also think that it is unfair to suggest that the city has done nothing.”

Brian Platt, city manager, and his team put together a draft of a strategic plan to create more affordable housing in Kansas City. The plan, called “A Vision for Housing,” includes details on various plans such as the Verge housing, adaptive reuse and senior housing, and the goal of creating 10,000 new low-income housing units by 2027. The public is invited to read the proposal and give feedback through the webpage.