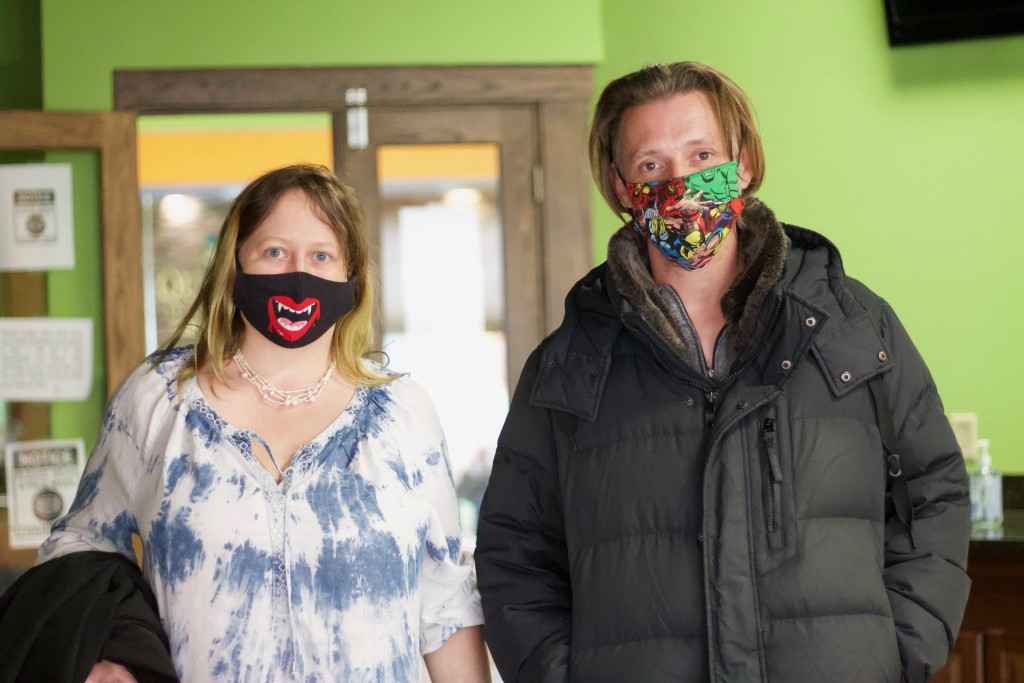 Alina Heart and Chet Bell, volunteers who have been working to make sure hotel guests are fed. // Photo by Bek Shackelford

Two weeks ago Mayor Quinton Lucas announced 90-day hotel accommodations for anyone in the over 100 homeless encampments in Kansas City. Reactions were overwhelmingly positive from the community. What volunteers and the beneficiaries did not expect was the lack of organization they would face—especially around getting people fed in this new arrangement.

The situation around this mass rehousing system has resulted in many positives. But, as always, attempting to help the housing-challenged has shown that our support networks let far too many fellow human beings fall through the cracks.

Some involved in the program are finding new footing. Others are more frightened and disconnected than ever before. And the success or failure of this city-based program seems to fall squarely on the shoulders of the non-profit volunteers involved.

There are eight hotels around the city currently housing people, and many of the hotels are 15-20 minutes by car from the metro. Before buses came on April 8 to the Westport and City Hall encampments to take people to hotels, most volunteer organizations did not know about the plan to house people in hotels. Taking into consideration the short notice and that soup kitchens or food pantries people would normally visit are further away, volunteers assumed the city would arrange meals.

When this was not the case, they had to scramble to arrange meals for people. While some hotels had access to regular meals, others went without food. Alina Heart and Chet Bell have been volunteering at the hotel with the most houseless guests.

“It’s not anyone’s fault directly, but the city isn’t stepping up to help,” says Heart, who has been volunteering on-site at the hotels nearly every day to ensure people are fed.

She and other volunteers have been communicating through group chats and Facebook groups to ensure the people at hotels are fed, but Heart and Bell both explained how sometimes miscommunication happens. This leads to people at hotels missing meals.

“One of the hotel locations went two days without food this week and five days without it last week due to miscommunication,” says Bell.

Heart strongly believes that there needs to be more resources for the people at hotels, as many of them are detoxing and are now further from support groups, or are struggling to acclimate to being indoors.

“The hotels are really trying to support us, but it feels like there’s a piece missing,” says Heart. “There are no transitions for people who have basically been camping [living outside] for eight years. There is no therapy. They kind of just stuck us on an island here, they don’t even have someone [a hotel employee or social worker] working all day.” 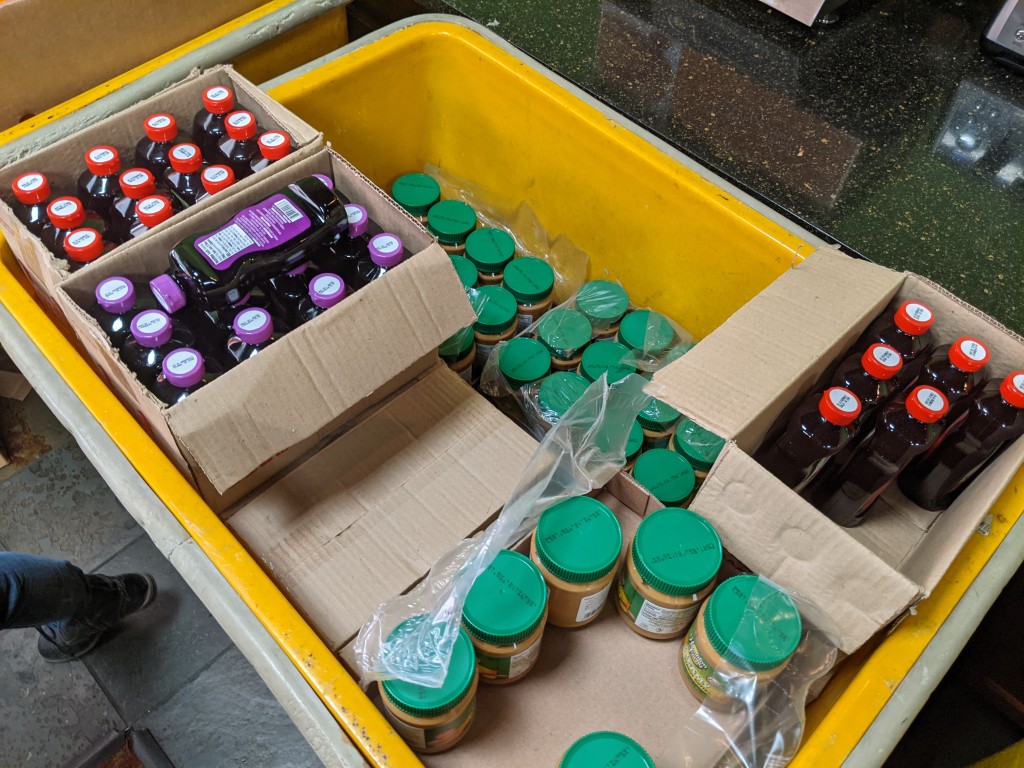 Some of the dry food from Harvesters. // Photo by Bek Shackelford

After paperwork was approved for a partnership with New Haven Seventh-Day Adventist Church and Harvesters, shelf-stable food was dropped off at each of the hotels and a commissary of sorts was set up. The purpose of the Harvesters food is for hotel guests to take it and store it in their rooms, for times when hot meals are not available.

Volunteers from the church and their food pantry, ReNewed Hope, helped with the first Harvesters food drop-off and distribution Thursday.

While reactions to the hotel rooms have been mixed, some have struggled with the relocation.

“To tell you the truth, it’s really not a win,” says “Pumkin”, a woman staying at one of the hotels. “They just put us out here—out of sight, out of mind. It’s a prison, a homeless prison.”

Hotel guests Andre and Chrystal, on the other hand, see things differently. Andre and Chrystal are staying at a hotel near Pumkin’s, and due to help from volunteers and the hotel’s owner, meals have been more regular there. 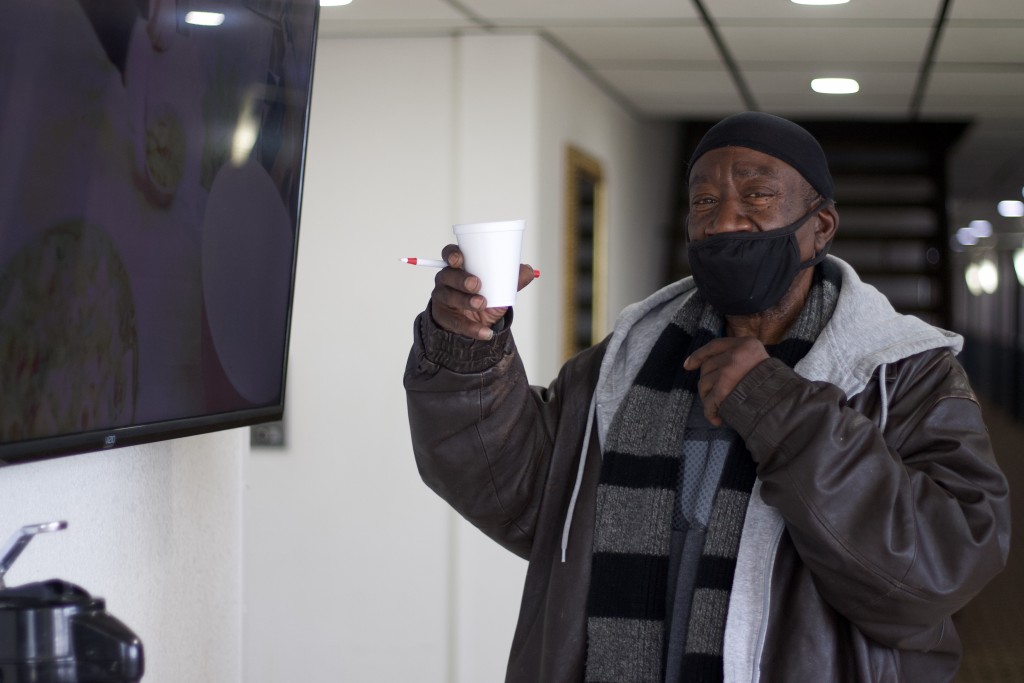 Andre in one of the hotel lobbies. // Photo by Bek Shackelford

“It’s been very peaceful,” says Andre, sipping on coffee from the hotel lobby. “I don’t think there is anything I’ve asked for accommodations-wise that they haven’t given me.”

54-year-old Andre works as a maintenance person for a nearby company six days a week. He has been without a home and in transition for about two years following his loss of hearing from contracting meningitis, which caused him to lose his job. Thanks to a cochlear implant, his hearing has improved. Andre says the hotel stay will allow him to start over while saving up.

“For most people starting over and doing the right thing is difficult,” he says. “It comes back to that personal choice.”

Chrystal and her family became homeless when their house burned down early March. Before the hotel accommodations were announced, they were staying in a tent in the woods nearby. She plans to move with her son and his family to help her elderly parents in Colorado, but needed transitional housing while she saves up for the move.

“We couldn’t find anybody to help us, we lost everything we own,” says Chrystal. “My 18-year-old son, his 22-year-old wife pregnant wife, and their two-year-old daughter are with me and we’re all trying to get back to Colorado ultimately at the end of the stay.”

Chrystal has made a plan to earn enough to get to her parent’s house. Her son is already working, and she is working on finding a job as well.

“I’d like to get my ID, and get a job, hopefully somewhere right close to here,” she says, gesturing to businesses near the hotel. “We will work through ’til this 90 days is up and then hopefully I’ll have enough by the end of that to get us all back to Colorado.”

“I can’t even tell you how much I appreciate it [the hotel stay],” Chrystal continues. “It happened at just the right time. I’m very grateful for what they’re doing and I’m not going to be rude to anyone here, you know, I mean, yeah, at the end of the day I could be sitting in a tent in the woods.”

Anton Washington, who was appointed as the director of volunteers for this project by The Greater Kansas City Coalition to End Homelessness due to his work on the Scott Eicke Warming Center, feels that for the most part, things have been straightened out thanks to the help of volunteers. He was quick to point out, however, how rough things were in the beginning and he felt that more support from the city would have made things smoother.

“There comes a time when things need to be ironed out,” Washington says. “There’s like a wrinkle, and everything is never gonna work at the very beginning, but things get ironed out to where they become smoother and have no wrinkles. So, yes, we had some issues in the very beginning, but we don’t have those now because we have people on board, they’re not being exerted.”

Though Washington feels meals are mostly under control for the hotels, he and many other volunteers wish the city was more involved.

Chris Hernandez, the director of communications for Kansas City, did not express remorse for the city leaving the colossal job of feeding those at hotels in the hands of volunteers. Instead, he expressed appreciation for the various organizations and volunteers.

“We appreciate the work of many non-profit partners with experience providing services to unhoused people,” says Hernandez. “They are working with us to provide meals, health care, IDs, counseling and other services to those who are staying in the hotels. The Greater Kansas City Coalition to End Homelessness and its many volunteers are coordinating service delivery for those in the hotels.”

As it stands, scheduling and coordinating meals (and often times cooking them) still lies in the hands of various organizations and volunteers.

[Update 4/28/21 11:15 a.m.: It was announced late last night that some of the unhoused currently staying at hotels across the metro will be forced to move to other hotels. The Pitch has reached out for comments.]

Today, we received a statement from the Chris Hernandez, the Director of City Communications. He stated that in response to complaints from hotel guests, the city decided to move people to a couple of different hotels.

“First, we have received several complaints from residents about poor treatment there, and we must insist that our residents are treated with respect,” says Hernandez. “Second, all the hotels were asked to submit rates and availability for the remainder of the program. That location came in at a much higher rate, and wanted an all or none situation, so it would have been fiscally irresponsible for us to continue there.”

Out of all the hotels The Pitch visited, Econo Lodge was by far the nicest and had the happiest guests. The staff was present and accommodating and the owner knew many guests by name.

Yesterday, the city announced plans for a “tiny house” transitional housing program. Locations for the small neighborhood of about 140 cabins provided by Pallet will be furnished with beds and have laundry and shower facilities onsite. In addition, there will be offices onsite to provide mental and physical health services and employment assistance.

If you have the ability to give to those in the hotels and Kansas City’s homeless communities, please check out this link tree by KC Blanket Drive, a community initiative to help people who are unhoused.

There are plenty of ways to get involved, from volunteering at one of the hotels to purchasing something on KC Blanket Drive’s Amazon Wishlist.

If you are experiencing homelessness, here is a list of shelters and services in the area from the Homeless Shelter Directory.