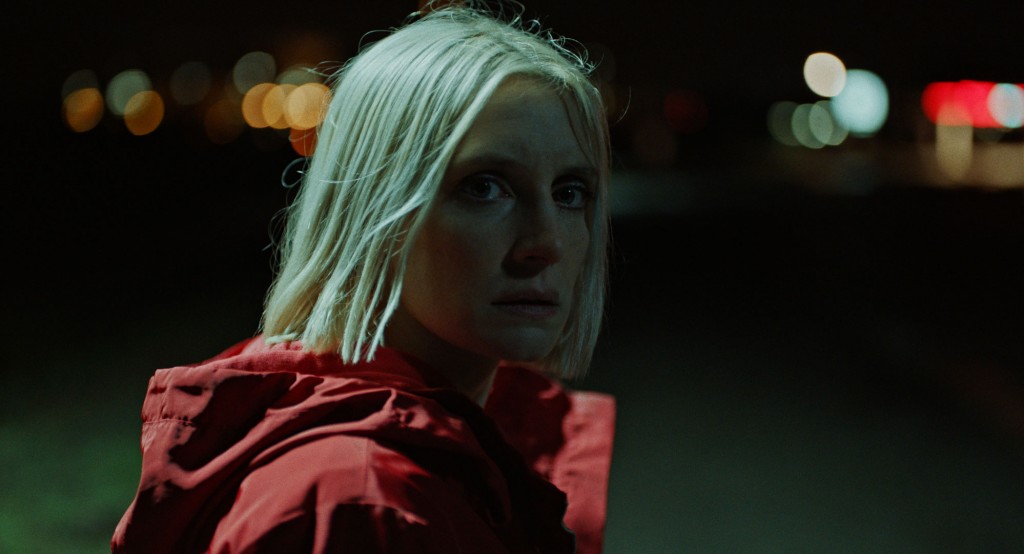 French filmmaker and comic artist Vincent Paronnaud (Persepolis) makes his English debut with Hunted. Sold as a modern take on the Red Riding Hood story, the dedication to adaptation ends with the protagonist (Lucie Debay) wearing a red hoodie. The new ideas never really kick in. At best you’ve got a big ole moody paint-by-numbers thriller, with some unnecessary asides. But the cast puts 110% effort in, and the filmic elements really stretched for something better. It’s a “fine” film that could have been more, and equally, could have been less. Totally “fine”.

A case of random highway kidnapping for the sake of hunting The Most Dangerous Game leads to a game of cat-and-mouse between a victim who finds her strength and an antagonist who loses his. There’s little surprise as to where this goes, nor the beat by which it hits. The interesting parts include a subtle hint at the idea our feminine hero might be able to summon Mother Nature herself to command the beasts of the jungle? Or. It’s possible I’m reading that wrong, based on how little we tie into it? Honestly, if I have to question where this comes from, or if it is real at all, then someone messed up.

Conversely, the story gives a surprising amount of screentime to the journey of our would-be murderer (Arieh Worthalter), and his eccentricities, concerns, and fuck-ups. None of it humanizing, so much as coyly interesting for tweaking a narrative that we’re accustomed to. To the film’s credit: sure. Things can have value without mattering. Not my biggest complaint.

All of this has been summoned to give context to the question: “What are we trying to say when we exploit the tale of a woman in peril in 2021?” What new knowledge is meant to be gained? What statement is supposed to be made? Who is to be answered to for the lines crossed? With the release of films like Promising Young Woman, we’ve seen how the genre is clearly consistently ripe for new visions and perspectives. But a stand-out concept breaking the mold occasionally is what got us here. What says the genre about the rest of its ilk?

Hunted toes the line of being a story of empowerment, and is shaky in how it navigates catharsis. Why does it track like a perspective on victimhood, played out both through the humanizing of the villain alongside a protagonist whose strength arrives via becoming either magic(?) or cartoonishly feral? It is possible to see where this intended to arrive, but if the only version of reclaiming personhood is to abandon it entirely, who are you trying to paint as the protagonist of the tale? If any of this misses the mark as an evaluation, I’m fine with that, because the targets within the film come off equally untouched.

It is a visually interesting if emotionally and thematically normie approach to a sub-genre that deserves better, more important take in a modern era. And certainly from someone whose creative talents have been long trumpeted for exactly this kind of focus. A misstep but not a crime; Hunted is just “fine”.