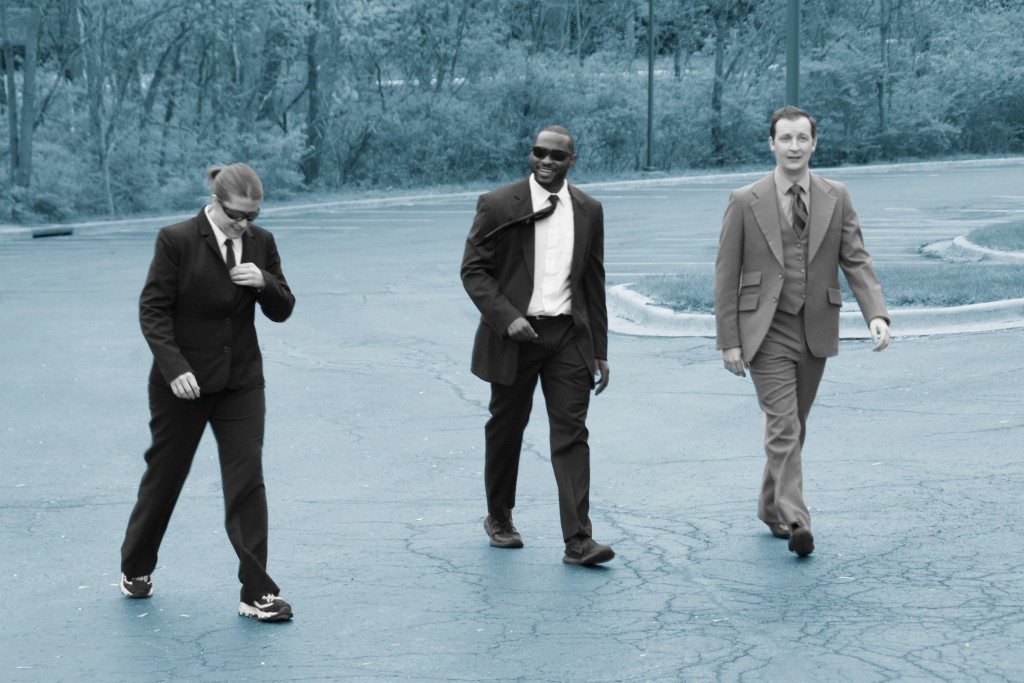 Every now and then a locally made movie catches on nationally even if it features no stars or was made with a budget similar to the price of a car.

Herk Harvey’s Carnival of Souls, Kevin Willmott’s CSA: The Confederate States of America and Jill Sixx Gevargizian’s The Stylist have all found audiences despite their modest origins. Willmott is now an Oscar winner for co-writing, and Gevargizian earned praise in the Los Angeles Times as her movie is playing in festivals across the country.

Like the previous films, the spy thriller Order 86 is unique, but its path to the marketplace is a little different. When the movie goes on sale at the end of the month, it’s coming with a Mystery Science Theater 3000-style commentary track from local movie wisecrackers Cinemasochists.

So why exactly does Order 86 come with comic enhancement? 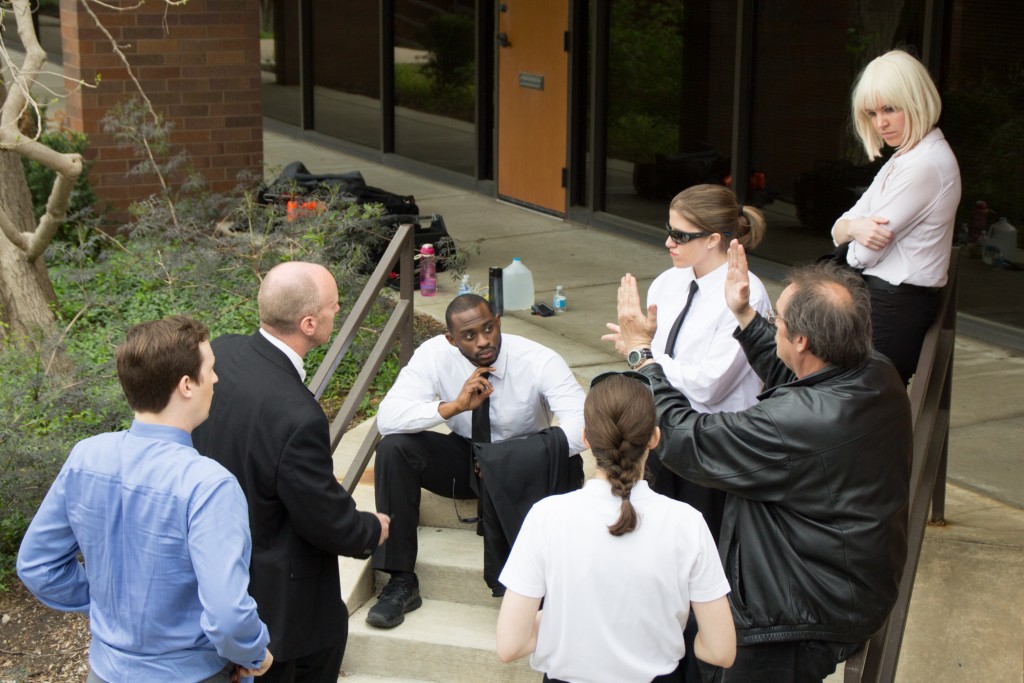 Behind the scenes filming Order 86. // Photo courtesy of A Merry Band Productions

Order 86 concerns a whistleblower named Frank (Coleman Crenshaw) who steals a computer virus that could wreck the global economy and communications systems. To prevent the bug from getting into the wrong hands, he secretly hands it to an unsuspecting waitress-aspiring actress (Laurie Catherine Winkel). She winds up being the target of covert operatives from around the globe.

How do we know they come from the other side of the Atlantic? The supporting cast is full of accents that are supposed to be German, Russian, or British, but it’s difficult to tell with all the mumbling.

It’s also hard to pull off a James Bond thriller when the locations are mostly in KC’s River Market (you can clearly spot dispensers for The Pitch), and the budget for gadgets is considerably less than what 007 spends on suits and martinis.

There’s also a recurring issue where the film goes out of focus as if cinematographer Todd Baron from The Room has taken over the camera work.

This is where the Cinemasochists come in. In the enhanced version, available on Vimeo, you’ll hear them shout jokes over the film. Enhancement, indeed. 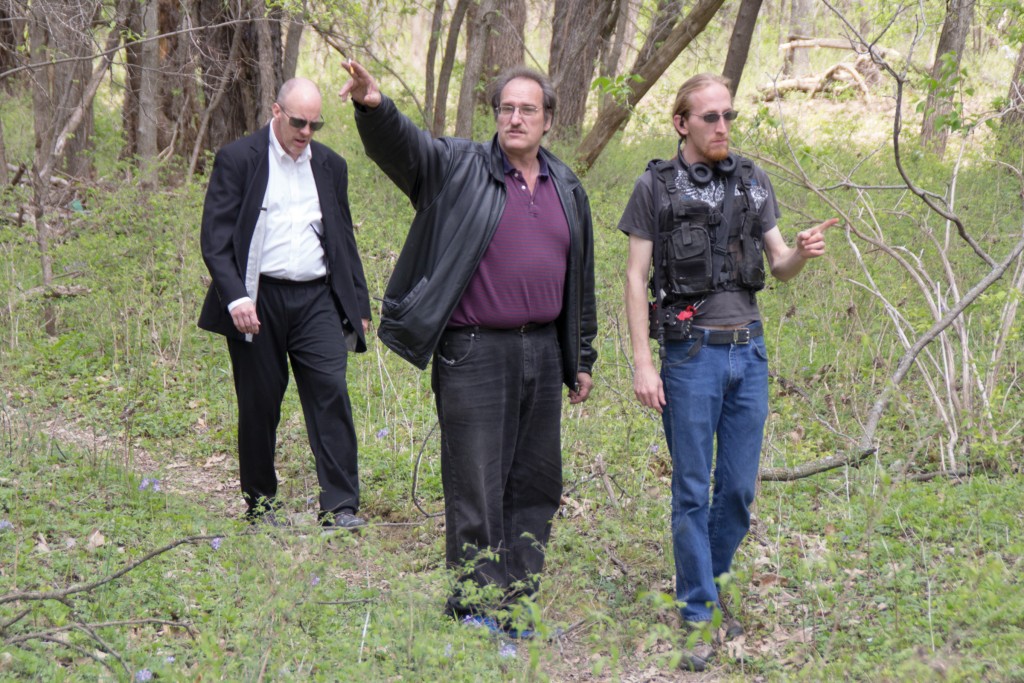 The team behind Order 86 building a mystery. // Photo courtesy of A Merry Band Productions

The decision to film an espionage movie away from the coasts seems a little odd, but Paxton recalls that he and Buswell weren’t interested in making the kind of first-timer films that others would choose.

“Everybody and their mother does the horror movie as their first movie, or they’ll do the romantic comedy route, so, let’s do something else,” he recalls by phone. Paxton would know. He has worked at several movie theaters and is an asset for any film trivial team. On mine, he was known as the “soundtrack whisperer” for his encyclopedic knowledge of music cues.

Buswell, who has worked at both DST and H&R Block, specializes in stage combat, so making an action movie isn’t so farfetched. After shooting, he restaged murder scenes for DNA of Murder with Paul Holes. Basically, he knows how to help people convincingly fake violent struggles.

He and Paxton were eager to produce something that wasn’t like the films they were watching.

“Both Alex and I had become a little disillusioned with what Hollywood has been putting out. I would go through a movie, and halfway, two-thirds of the way through the movie, I would know how it ends,” says Buswell.

“When I wrote the script, I’d come to a crossroads where a decision had to be made by a character or a plot decision, I’d say, ‘What would Hollywood do? They would turn left.’ So, I would turn right and see where it would go.”

The filmmakers ran into a problem with an opening sequence that had to be reshot because it was moving lethargically.

“We’d filmed that scene once before. We weren’t really happy with it. It just didn’t turn out quite right. This is our opening scene, so it needs to flow better. Our original actor wasn’t able to make it,” recalls Paxton.

To take over the role, the filmmakers cast Craig Glazer, the owner of Stanford’s Comedy Club, who had had some acting experience and managed to nail his cameo. Sadly, he got to see the movie, which finished shooting in 2016. Glazer died of cancer in 2018. Glazer was the subject of the cover story in the July 4, 2013 issue of The Pitch.

Bussell recalls, “I was shocked when I heard that he died. The other thing that’s sad for me is that my Dad died the year we filmed it. He died after Christmas of 2016. I really wanted him to see me make a feature film.”

Buswell and Paxton are happy that people can finally see their effort and that the proceeds from purchases can be used to pay their collaborators and start another movie, even if the wisecracks are added. Both are quick to credit the people who gave all and want them to get their due.

“They worked from dusk till dawn,” admits Paxton.

Admittedly, adding the commentary track is an unusual selling point. 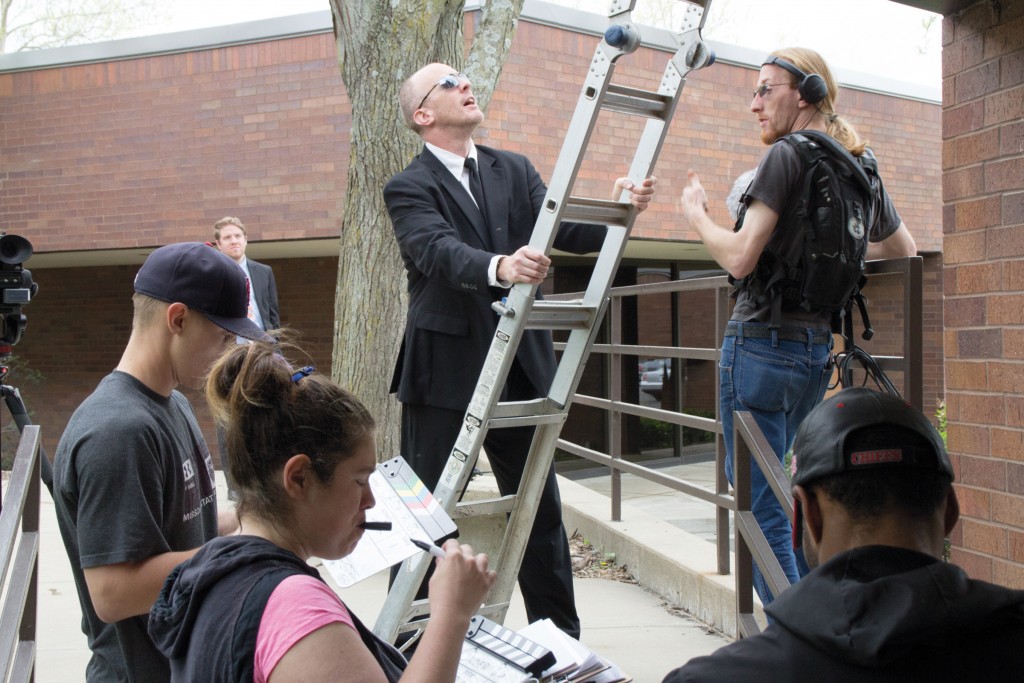 “I used to work at an advertising agency back in the early 2000s. It’s now called VMLY&R. One of my many coworkers from that period is Sean Hogan, who is now a partner at DMH. We’ve remained friends on Facebook. He said that there was this movie that had somehow found its way to him. The people who made the movie had trouble marketing it and said let’s go to an advertising agency. He ended up with a copy of it. DMH doesn’t do film marketing. They have bars in their offices and in some cases watch the movie and Sean and kind of wanted to pick my brain about it and see if there was something about this movie that was worth doing something with,” recalls Cinemasochist Dale Maxfield.

“This seems like something that we could riff, but how do I tell the filmmakers that their movie is bad enough to be fodder for us and how do we navigate that? We respect the movies that we make fun of. We know that movies are hard to make,”

Maxfield and fellow Cinemasochists Matt McCann and Bess Hayles do more than mock their targets. Before COVID-19 forced them to make virtual presentations, the three presented a little history on their movies and read from tight, color-coded scripts. If their movie is Highlander 2, Fifty Shades of Grey, or Order 86, the trio can go through more than 700 jokes per offering. 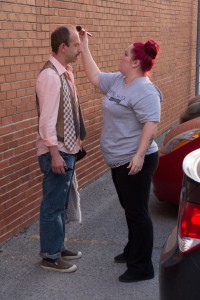 Despite the ribbing the filmmakers have taken, Buswell and Paxton did learn filmmaking chops as they progressed. Postproduction takes longer if you are learning it for the first time. Nonetheless, Buswell pulled off a formidable technical trick that I didn’t notice on a 32-inch TV.

“I’m sure that many people have said, ‘When are you finally going to release this?’ Computer technology has been a huge boon. I couldn’t have done this without the ability to use a computer,” recalls Buswell. “Do you remember when they go back to Jen’s apartment toward the end of the film and Bernie (Joshua Busick) is down by the cab? The Germans attack, but there’s nobody there. It’s just the crickets and the cab. I was able to digitally erase (Bernie) from the shot.”

The filmmakers ingeniously incorporated their surroundings.

“To be technically correct, the helicopter itself was a real helicopter, which I added digitally to the alley scene, putting it both in the sky and its reflection in the window as it passes.”

“I’ve got to hand it to him,” admits Maxfield. “The fact that I didn’t notice that there’s a fake helicopter in the movie, that’s good work for your time out.”

Despite the ribbing, Buswell is happy that the movie has at least one fan. “My Mom has been able to see it. She loved it, of course, because I made it. That’s what moms are like,” he laughs.

Paxton is at work on another script and an audiobook. He adds, “In the immortal words of Edward D. Wood, Jr. (the director of such disasterpieces as Glen or Glenda and Plan 9 from Outer Space), my next one will be better.”