Get yourself something warm and delicious during this cold week 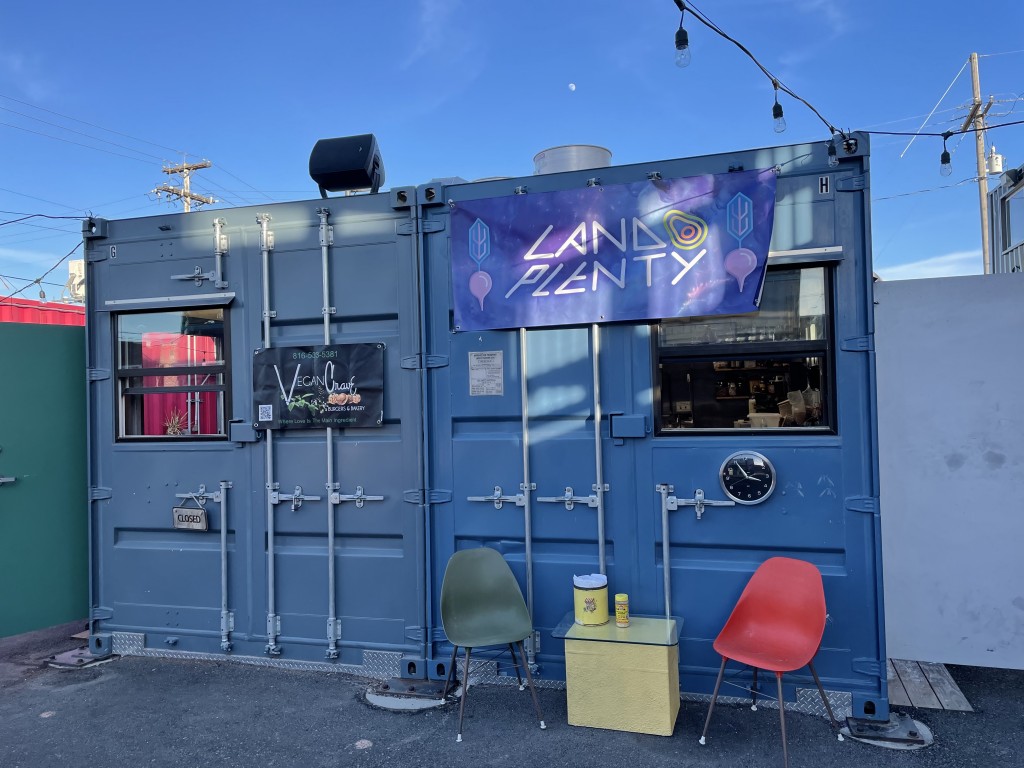 Land O Plenty and Vegan Crave are next door neighbors in the Iron District. Both of the newcomers serve vegan cuisine. // Photo by Landon Isabell

Known for its colorful shipping containers and its collection of shops and restaurants slinging good eats, The Iron District is a popular destination for hungry customers in North KC. The outdoor experience is welcoming several new food and retail vendors in their class of 2022, including two new vegan and vegetarian-friendly spots. There’s plenty of seating when it’s nice out, and they also do to-go when you want to cozy up on the couch during cold weather.

Land O Plenty serves vegan Italian food, and they’ve got all of the classics. It’s the brainchild of Landon Isabell, a self-taught vegan chef who grew up in the Midwest. He relocated to the West Coast for a while but brought his talents back home to the good people of KC.

Their menu abounds with classic fare. One of the most popular items is Eggplant lasagna, made with deep-fried eggplant, shitake Bolognese, spinach, and a mix of plant-based cheeses.

This—along with their other mains like the manicotti—is served with a complimentary slice of garlic bread. 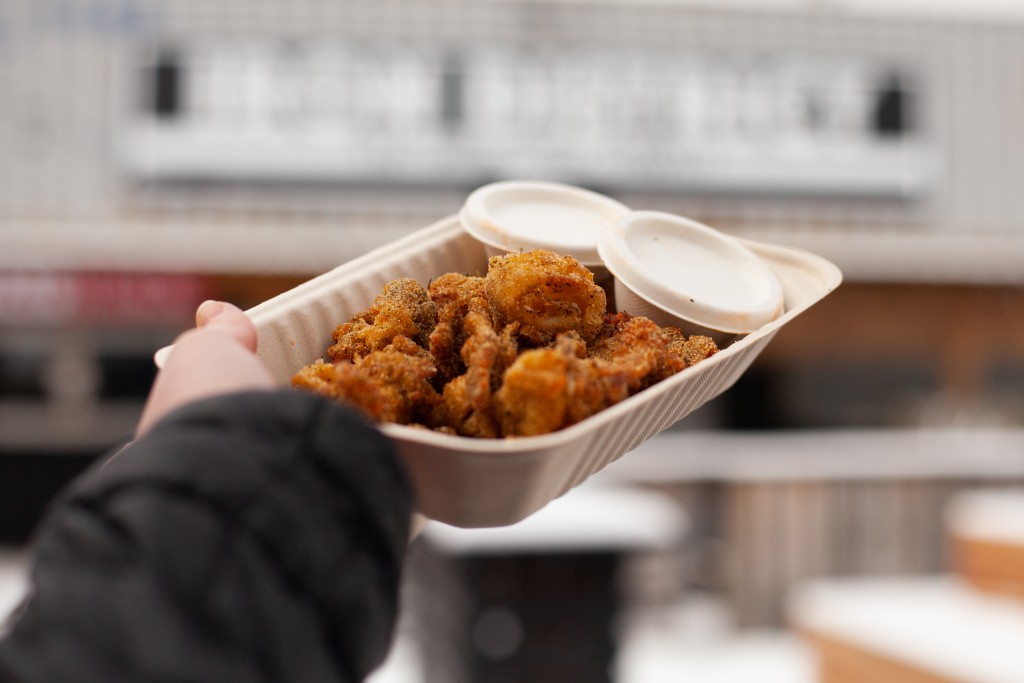 The vegan calamari from Land O Plenty, served with Pesto and Marinara, is made from fried hearts of palm and blue oyster mushrooms. // Photo by Liz Goodwin

Another great standout is their calamari. It’s made with blue oyster mushrooms and hearts of palm slices, all deep-fried and served with a side of marinara sauce and pesto. For all my fellow calamari lovers, this nails the mark. It’s perfectly salty, crispy, and not too chewy—and the dipping sauces are the cherry on top. The mushrooms even somewhat replicate the “baby squids,” which I love but know other people hate, which gave me the complete calamari experience.

There are also some sweets on the menu to top it all off. Offerings include the classic cannoli—dipped in chocolate and filled with chocolate chip ricotta—and a chocolate lava cake—a delicious chocolate indulgence with a hint of coconut flavor.

Land O Plenty is in the Iron District at 1599 Iron Street, North Kansas City, MO 64116. The District’s hours are Thursday through Saturday 11 a.m. – 7 p.m. and Sunday 11 a.m. – 3 p.m.. During the winter season, individual vendor hours vary. Check out the restaurant’s Instagram page for mouthwatering photos and updated hours and happenings. 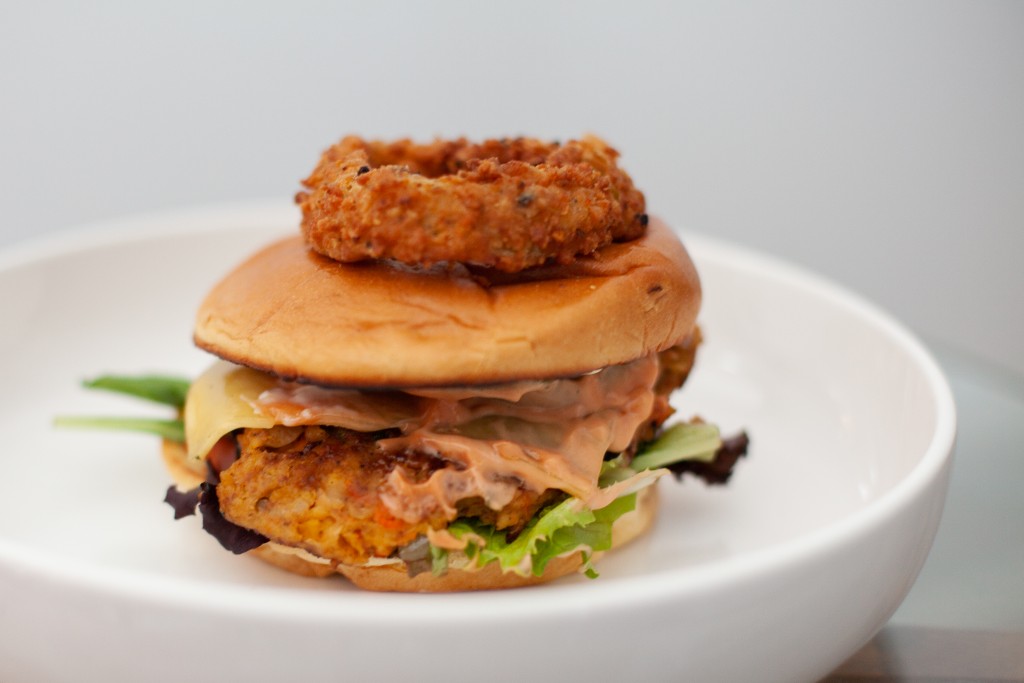 The District Burger from Vegan Crave in the Iron District, made with a chickpea and kale patty and topped with an onion ring. // Photo by Liz Goodwin

Vegan Crave is the second new inhabitant and Land O Plenty’s next-door neighbor. This joint specializes in burgers and sweet treats made from scratch. The head chef is Teeshia Madge, who you might recognize from her previous endeavor, Teeshia’s Taste Café.

The menu has a host of sweet and savory options. Their top sellers include the sensational jalapeno burger, made with black beans and other spicy bites including jalapenos and pepper jack cheese.

I went with “The District,” which is one hell of a sandwich. Made with chickpeas and kale, smoked gouda cheese, a barbeque aioli, pickles, and other assorted veggies, it packs a flavorful punch in each bite. It even comes topped with an onion ring, and—be warned—a napkin is required in the best way. It’s “Burger’s Law”: the messier, the better.

Sides include “fries in abundance,” and paradise pasta salad. Sweets vary on the day, but the lineup features plenty of cookies including snickerdoodle, chocolate chip, and maple chocolate chip. Cupcakes are also in the mix, including vanilla, gluten-free vanilla, and carrot cake.

Vegan Crave is also in the Iron District at 1599 Iron Street, North Kansas City, MO 64116. The District’s hours are Thursday through Saturday 11 a.m. – 7 p.m. and Sunday 11 a.m. – 3 p.m.. During the winter season, individual vendor hours vary. Check out the restaurant’s Instagram page for snapshots and happenings. 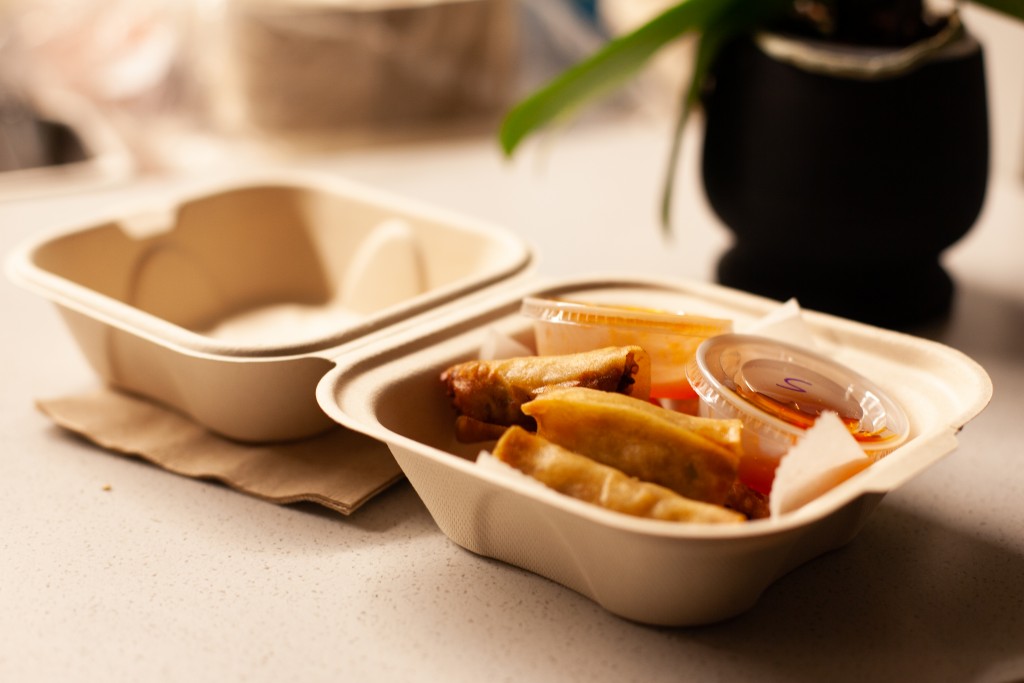 Ting’s Filipino Bistro inside of Parlor is a new sport serving up Filipino eats including this Lumpia, a spring roll dish made with ground pork. // Photo by Liz Goodwin

The gourmet food court has welcomed its newest resident, Ting’s Filipino Bistro. The team is on a mission to serve delicious and expressive Filipino fare, and their menu has plenty of offerings.

The Bistro’s owner is Theresa “Ting” Santos-Spencer, who takes her recipe inspiration from her family’s signature dishes she ate growing up. Their website features pictures of her folks and descriptions of her inspirations, parents, and grandmother, who was the creator of most recipes.

Ting’s makes theirs with pork, carrots, onion, garlic, and scallions, and serves them with a choice of sweet or hot dipping sauce. They’re delightfully crispy, well-seasoned, and perfectly crafted for the sauce it’s paired with. I love a sweet chili sauce but I also like a bit of spice, so I would recommend going with the hot one. They’re both pretty sweet so you can’t go wrong.

There are also plenty of options for the main course, including adobo chicken or pork with rice, Bistek beef, barbeque pork sticks, and Pancit, a noodle dish with chicken, veggies, crumbled pork rinds, and lemon wedges. Drooling yet?

If you find yourself there on a Sunday, they also do a Sunday brunch. You can choose from the Longsilog with sweet and spicy sausage and egg or, if you’re not into eggs, they also have a sweet and salty beef dish with rice and tomatoes.