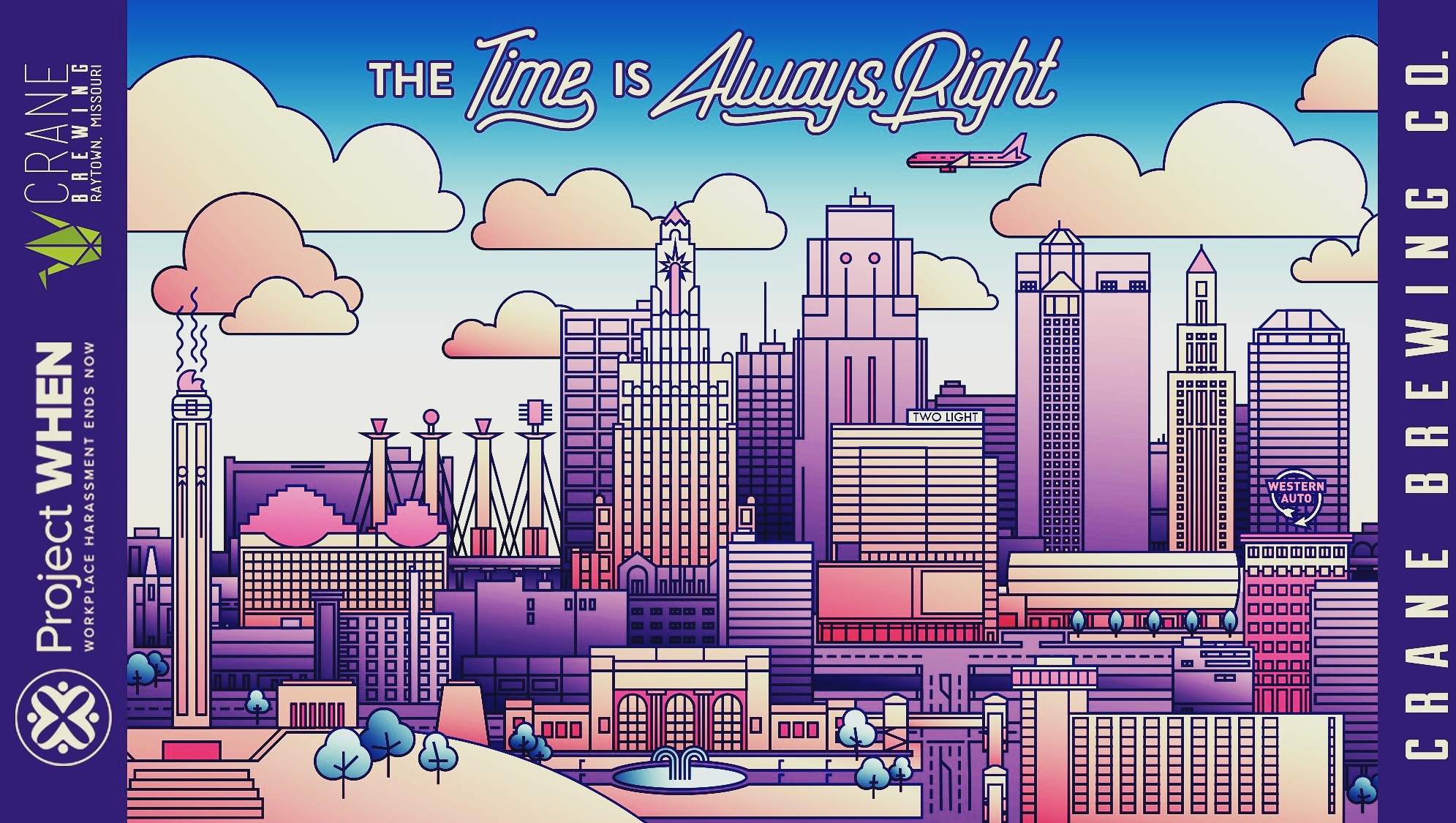 Lager yeast, pilsner malt, and rice. Those are the main ingredients in Crane Brewing Company’s new Cold IPA called The Time is Always Right. The new limited-edition beer is unique in a couple of ways. As far as Chris Meyers, co-founder of Crane Brewing Co., is aware, Crane is one of about three breweries in the country doing Cold IPAs. It’s a hyper-engineered beer style that comes out like a dry hop or pale lager. Think a pilsner-style beer, except crisper and lighter.

The beer is part of the CraneCares charitable beers project that the brewery began in February of 2020. The brewery has previously supported a number of foundations through CraneCares, including KC Hospitality Support Initiative, 15 and the Mahomies, Hope for Days, the Step in Faith Foundation, and the Big Brothers-Big Sisters of Kansas City.

The name for The Time is Always Right IPA comes from a Martin Luther King Jr. quote, “The time is always right to do what is right.” For Meyers, doing what’s right at this time in brewing means working to harassment in the brewing industry. Crane partnered with Project WHEN—a nonprofit working to educate people about and end workplace harassment—to try and do just that.

Meyers decided that Crane needed to partner with Project WHEN after hearing of yet another instance of harassment in the brewing industry. This time involving the Kansas City brewing community and people he knew. After learning about the compounding workplace harassment claims at Boulevard Brewing Company, Meyers wanted to ensure that Crane is part of changing the industry and building safe workplaces. Organizations typically reach out to the brewery to partner with CraneCares, but Meyers sought out Project WHEN.

“This one was different, just because it seemed to be several back-to-back public issues of different people in the alcohol or service industry with harassment,” says Meyers. “But it’s obviously not anything new, and it’s not anything just local. It’s all over. It’s unfortunately kind of the culture of the industry. This project in particular was us trying to not just avoid it, but do the opposite, to find something positive to come out of it. I started researching and realizing that a lot of people in those situations, a lot of the victims don’t know where they can go [or] who they can talk to, especially if they work a lot if they’re in the same circle. They don’t necessarily feel like they have anyone outside of their circle to discuss it with.”

As part of their partnership, Crane and Project WHEN will be hosting a free virtual roundtable discussion from 7:30-8:30 p.m. March 25. Meyers is hoping that the roundtable and partnership with Project WHEN will help victims know that they have a place to turn to for support and action in the event of workplace harassment. He also wants breweries to seriously examine their practices and how to be better.

“I think there’s a lot of unfortunate instances where either the people who are in charge don’t really know that they’re what they’re doing, or even the employees don’t realize that they’re in a situation that they don’t have to be,” Meyers says. “I think it’s tough—especially with work and the way a lot of people’s benefits and healthcare are tied to work—to get out of those things. I’m hoping victims feel like they have a better place to turn that they have support. I also want businesses like ours, other small businesses, to kind of take a look at what they’re doing. Especially when alcohol is involved, what can they do to make things safer?”

Meyers reached out to people in the Kansas City brewing industry to participate in the discussion. Panelists include Bri Burrows, head brewer and co-owner of Big Rip Brewing Co.; Dez Jones, brewer at Torn Label Brewing Co.; Katie Camlin, beer manager at Plaza Liquor; Elizabeth Belden, brewer at KC Bier Co.; Penny Clevenger, bartender at Crane; and Damon Arredondo, former head brewer at Strange Days Brewing Co. and committee member for MBAA Diversity, Equity, and Inclusiveness Task Force. Cathy Morrison from Common Purpose will be facilitating the discussion. The panel will share their own experiences and discuss a set number of topics, but will then open up to those in attendance for questions and broad discussion.

Crane brewed about 60 cases of The Time is Always Right for the CraneCares partnership, but Meyers says they will go fast. He and his team hope to distribute some of the beer throughout the city, but it often sells out before that can happen. The fast and constant support for the CraneCares initiatives inspires Meyers because of the community it creates.

“It’s the community that allows us to do it,” says Meyers. “The community always turns out in support of a lot of these initiatives, so it’s more of a collaborative aspect. I think people realize if we didn’t have the city behind us buying this beer, we wouldn’t be able to have the funds to then donate. That’s been kind of a special thing.”

To register for the roundtable, visit this link.