Chicken Macaroni & Cheese sells a hell of a sandwich 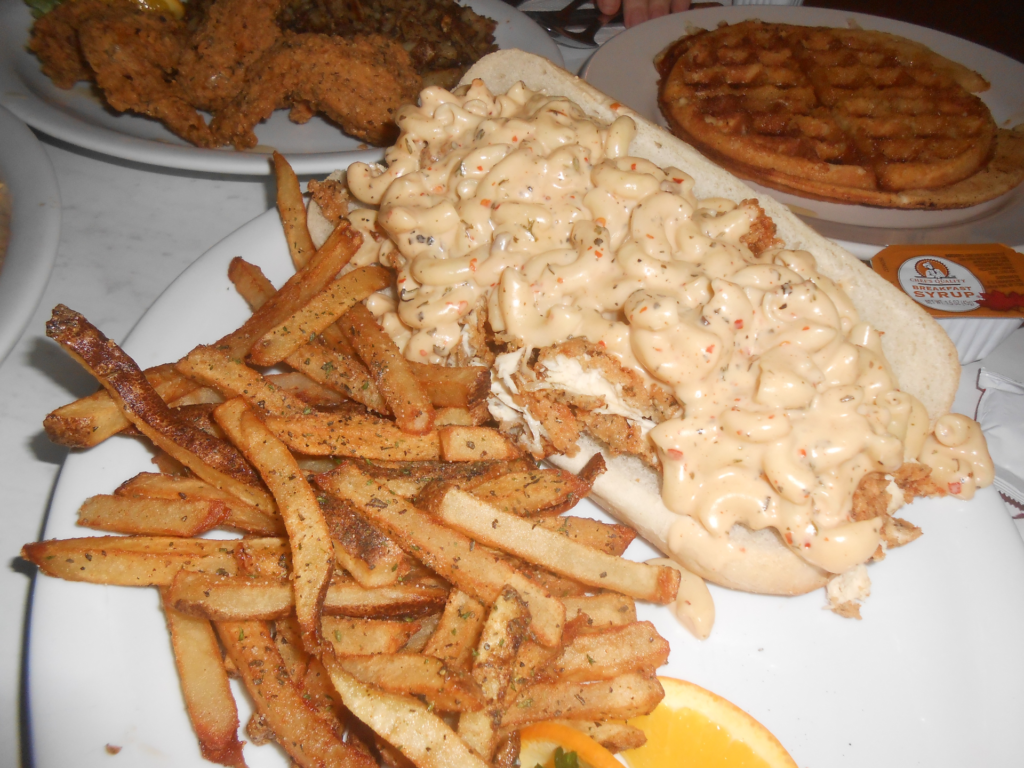 Everyone should taste a Chick-A-Roni sandwich at least once. And if you do, trust me, you won’t need to eat again for 24 hours.

The one-month-old Chicken Macaroni & Cheese restaurant at 7025 Prospect has a lot of interesting dishes on the menu (including a “regular-sized” plate of chicken fried rice that could easily feed a family of five), but maybe none as interesting as the Chick-A-Roni: a soft hoagie bun filled with chopped pieces of crunchy, spicy fried chicken and then blanketed with an absurdly rich, seductively seasoned macaroni and cheese. It’s one of the most unusual – and delicious – sandwiches I’ve tasted in a long time.
The sandwich is a great combination of textures and flavors: creamy, crunchy, spicy, supple. And it’s made for sharing (two of us couldn’t finish one sandwich), particularly if you’re interested in sampling some of the other house specialties at the venue owned by Dyamund Shields and his son, Dyamund Shields Jr.

Other members of the Shields family were working in the restaurant last night, including two youngsters who took their duties clearing plates and refilling beverages (the restaurant currently offers only iced tea, fruit punch and lemonade) very seriously.

It’s a pretty dining room and very comfortable. Entertaining, too. (There are a half-dozen TV monitors in the room, and last night they were all tuned to The Godfather, Part II; watching the skinny and youthful Robert DeNiro from 1974 made me pause at eating more than one fried-chicken wing.)

The restaurant, which moved to the current location from 5311 Prospect last month, serves breakfast all day, beginning at 10 a.m. – Dyamond Shields says that after the venue’s official “grand opening” in March, the breakfast hours will begin at 8 a.m. – and that menu includes a fluffy waffle with three fried-chicken wings, French toast, omelet combo plates and a hefty pork chop breakfast served with grits or buttered rice.

During the lunch and dinner shifts, the restaurant offers fried or jerk tilapia, burgers, chicken dinners, pork-chop dinners and a couple of Asian-inspired dishes. The “All-You-Need” combo, priced at $12, includes three chicken wings and a half-pound double cheeseburger.