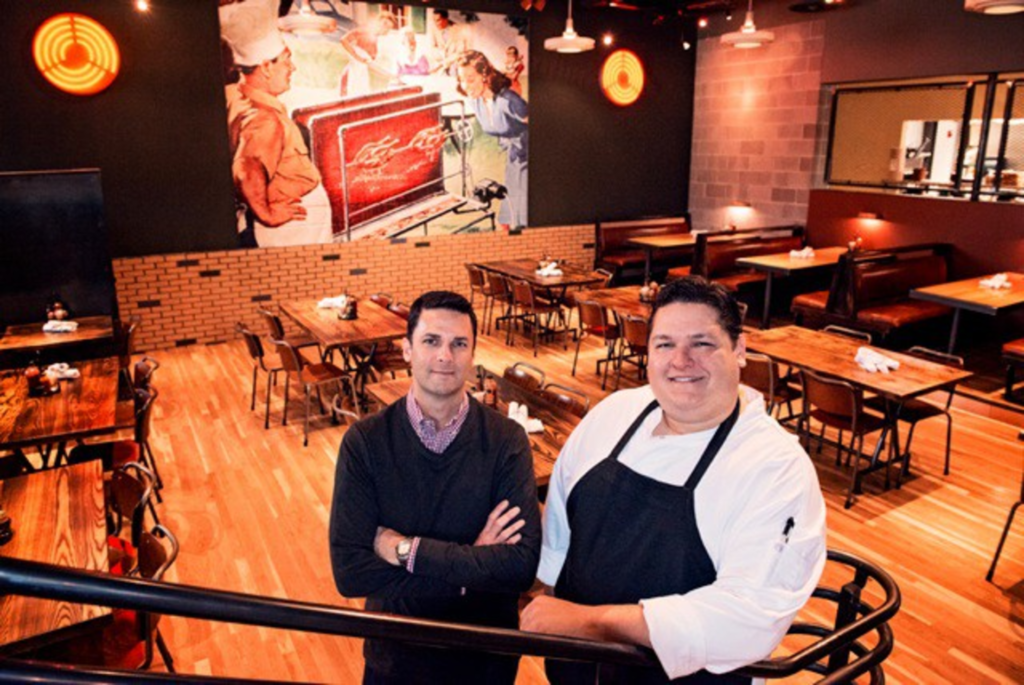 Char Bar Smoked Meats & Amusements, which opened today at 4050 Pennsylvania, has a 7,000-square-foot interior, taking up only half of what was most recently the cavernous Beaumont Club. But the place still feels endlessly large. There’s a spacious lounge beyond the striking bar, and just outside that room’s windows waits a beer garden that’s still under construction for a March launch. That’s where the amusements will come in: a fire pit, a croquet court, a bocce court, and giant swings made from airplane tires.

For now, though, the Westport restaurant’s menu, and the space itself, offer plenty to take in.

The dining room is separated from the bar by 1950s-style, elaborately cut concrete blocks, and from the kitchen by a trio of antique metal fences. A mural on the south end of the dining room reproduces an amusing illustration of a distinctly odd suburban backyard cookout. Some of the tables were created from pine taken from a razed bowling alley’s lanes. Others have been assembled using charred ash. The entrance is paneled in cypress boards that have been treated with the Japanese shou-sugi-ban technique, which chars the surface to accentuate the wood’s grain.

So there’s a lot of char inside Char, the latest restaurant from Mark Kelpe and James Westphal, of the Beer KC restaurants (McCoy’s, Beer Kitchen, the Foundry). There’s even a charred cocktail, the Smoking Gun, made with Bulleit Rye, Grand Marnier, Campari, a house-made burnt simple syrup and two kinds of bitters; as a finale, the bartender shoots pecan smoke into the glass and tops it with a coaster so that the drinker gets a glass that’s visibly smoking.

And, of course, there’s barbecue, though that’s not necessarily the point.

“Mitch has overseen our barbecue program,” Kelpe says of competitive barbecue star Mitch Benjamin, best known for his Meat Mitch brand of barbecue sauces and rubs. (Benjamin is a golfing buddy of George Brett’s, and the baseball great was at Char Bar’s Saturday-night soft opening with his wife, Leslie, and a coterie of friends.) “But we’re not calling this a barbecue restaurant because we did not want immediate comparisons to traditional Kansas City barbecue — specifically, counter service, premade side dishes and frozen fries. I tell people that we’re a full-service, Southern-inspired smokehouse with a rotating list of American craft beers, wines and bourbon.”

If Q39 broke the template for the traditional barbecue venue in Kansas City earlier this year, Char Bar takes an even bolder step, with meats smoked over hickon (a hybrid of hickory and pecan) and an inspired menu that pays tasty homage to the Deep South. The chicken and waffles, served over a savory bacon-cheddar waffle, were very good when I tasted them this past weekend. And when I go back in a few weeks to review the place, I’ll try shrimp and catfish dishes along with the barbecue.

Char Bar takes some of its inspiration, Kelpe says, from a six-city barbecue and restaurant tour that he took almost a year ago with design consultant and KC Beer partner Daniel Salazar, who designed the restaurant’s interior and outdoor garden spaces. The cities included Boston, New York, Atlanta, Chicago and Miami, but they found their favorite barbecue in Brooklyn, at a place called Fette Sau.

“It translates as the Ugly Pig,” Kelpe says. “It’s a tiny room, where you stand in line, and it only has, like, seven things on the menu. But it was incredible, with this thick, spicy crust on all the meats, clearly made with coffee as an ingredient.”

That restaurant influenced Kelpe (assisted by legendary local chef Michael Peterson, who created the Char Bar menu with Kelpe, and the restaurant’s executive chef, Jeremy Tawney) to create a new dish, to be introduced in December.

“It’s an entrée we’ll call the Meat Hammer: a 1-pound, bone-in smoked short rib with ‘cowboy bark’ — made with coffee, Cajun spices and brown sugar. It will only be available on Saturdays.”

Kelpe is also rolling out other weekly specials: smoked pastrami on Tuesdays, smoked short-rib pot roast on Wednesdays, fried-chicken dinners on Sunday nights. And there’s a Southern-style weekend brunch on the horizon. “It’s about four weeks away,” Kelpe says. “We’ll have lobster with grits, a burnt-ends eggs Benedict, and our version of surf and turf: smoked pork belly and lobster.”

Kelpe also notes that Char Bar may be the only smoked-meat destination around here that devotes 20 percent of its menu to vegetarian items. “Even meat eaters don’t want barbecue all the time,” he says. That means more than just side dishes, including a smoked-jackfruit sandwich, a retro grilled pimento-cheese sandwich (with green tomatoes and avocado) and a portobello sandwich, among other items.

“We’re making everything in-house,” Kelpe says. “We use real maple syrup for our chicken and waffles, which also has three different house-made sauces, including a smoky hollandaise and a Tabasco honey.”