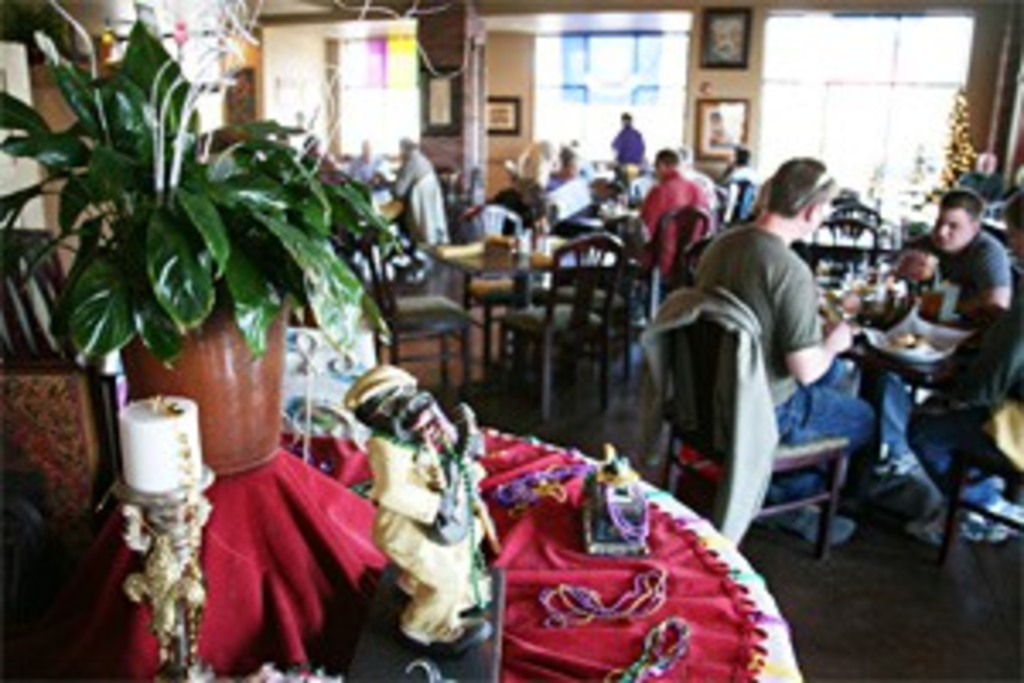 I didn’t grow up anywhere near a bayou, so the closest I came to jambalaya as a kid was hearing the Hank Williams song on a TV variety show. (There’s a bubbly 1973 version by the Carpenters on YouTube that has to be seen to be believed.) I once innocently asked my parents if I could taste the food mentioned in the song — jambalaya, crawfish pie, file gumbo — and they looked at me as if I’d asked to eat unicorn stew. Even if there had been a Cajun-style restaurant in my home town, it wasn’t the kind of food my parents would have liked. “Crawfish,” my mother said with a shudder, “live in the mud.”

So I never tasted real Creole and Cajun dishes until I was an adult and spent a little time in Louisiana. Kansas City, meanwhile, has seen several Cajun restaurants come and go. Other than the venerable Jazz on 39th Street, almost all of them have sunk into the swamp of oblivion: Kiki’s Bonton Maison, the Big Easy Café, Red Vine, Copeland’s, the Fountain Café. The short lifespan of some of these restaurants suggests that when it comes to this type of fare, the locals prefer Popeyes Fried Chicken.

It must not be that easy bringing the authentic flavor of the Big Easy to the heartland. That’s why I give credit to Louisiana-born Robert Boudreau for taking the gamble to open a satellite venue of his St. Joseph restaurant, Boudreaux Louisiana Seafood & Steaks. (He returned the original X of his French family name to his restaurant’s title for good measure.) The Mission Farms shopping-and-residential development in Leawood is, however, an odd location for this particular restaurant concept. And the dining room, which should probably feel cozy and intimate, is ridiculously vast.

“It’s like a high school gymnasium that’s been decorated — tackily, I might add — for a Mardi Gras party,” sniffed my friend Carol Ann, an interior designer, on the night I brought her and Southern-born Addison to dinner.

Addison had eaten at the Boudreaux restaurant in St. Joseph and at the new one in Leawood, and he told me he’d been underwhelmed. “But I’m willing to give it another try, darling,” he said in a molasses-thick drawl. “I love New Orleans cooking. And to be honest, the St. Joseph one wasn’t so bad, except my gumbo didn’t have nothin’ in it.”

The restaurant seemed like it didn’t have nothin’ in it, either, on the night we ventured into the place. A handful of people were at the bar and a few tables were occupied, but because the dining room is so big, it seemed even lonelier than it was. We were escorted by a server from the entrance to a four-top in the center of the room, next to a table loaded with Mardi Gras tchotchkes and dripping with Fat Tuesday beads.

“It’s vulgar, baby, but so is New Orleans,” Addison said. He looked up at the server, a pleasant young man named Tom. “What’s on the starter list that’s gonna make me think I’m in the French Quarter tonight?”

“A lot of people like the crab balls,” he said.

“I didn’t know they had ’em,” Addison said. “And what about the fried alligator? What’s that like?”

What he brought out was a plate heaped with little golden-fried nuggets that were so bland, they could have been fried tofu for all I knew. The cream-style gravy that came along as a dipping sauce didn’t do much for me, either.

The crab bisque, on the other hand, was exceptional: a decadent, silky cream soup loaded with lump crab (and a little mound of white rice served on the side). When it comes to crabmeat, Boudreau has balls all right — the dishes that incorporate it were all amply favored.

“The owner will go broke serving so much crab,” Carol Ann said.

We were less impressed with the (crabmeat-less) gumbo, made with a smoky roux that tasted as if the flour had been slightly scorched. As Addison had predicted, it turned out to be a little skimpy on chicken and sausage — and the sausage was too chewy. “It’s not sausage — it’s jerky!” he said.

“It looks like a high school science project,” Addison said, looking down at the plate. “All the things you can fry at one time.”

Carol Ann was happier with her dinner — a hunk of red snapper with a fistful of crabmeat stuffed into its belly, lightly blackened and served with a buttery “topping” of broiled mushrooms, shrimp and more crab. “The vegetables are perfectly steamed,” she said, “and the topping is a meal in itself. It’s too much food.”

I was tempted to order the signature steak, a 12-ounce marinated rib-eye, but I was more in the mood for a little soul food. The smothered pork chops were calling my name. The two 5-ounce chops were tender and juicy but drowned in a thin, brown gravy that splashed all over the table. The pink-orange “Cajun mashed potatoes” were at least served hot, if dry and only modestly spicy.

In fact, I didn’t taste much that was particularly spicy. I don’t know whether Robert Boudreau is keeping a lock on the spice cabinet because Kansas diners are notoriously timid when it comes to fiery seasonings or because that’s just his personal style.

My friend Ross, who accompanied me on a different night, noticed the lack of heat in his visually impressive shrimp Creole. But was that so wrong? One of the big differences between Cajun and Creole culinary styles, I later discovered, is that Creole cooking uses more tomatoes, whereas Cajun cooks with more spices. Creole reflects a wider range of culinary influences than Cajun, so it’s considered to be slightly more European — and richer. But the Boudreaux’s menu describes the dish as being spicy, and Ross just wanted it … spicier, damn it.

We’d begun that night’s meal with one of the more eccentric starters: jalapeño “poppers” stuffed with — do I even have to say it? — crabmeat instead of cheese. They looked like big, luscious fritters and tasted like the crab-cake concoction crammed into a bloated jalapeño. It had more novelty appeal than great taste, but at least it sounded more festive than the crab balls.

This time, instead of going for one of the etouffe options or the Cajun barbecued shrimp, I chose a simple broiled snapper — unstuffed — served with Veracruz “topping” (a word so indelibly linked to ice cream that I have a hard time even writing it here) and slivered bell peppers, little pink shrimp, fingernail-sized crawfish tails and crabmeat in a butter-wine sauce. I ate it with the bread our waiter had brought out: toasted slices of French bread spread with garlic butter.

It was all very nice but nothing really to sing about. Not like Hank Williams or the Carpenters.