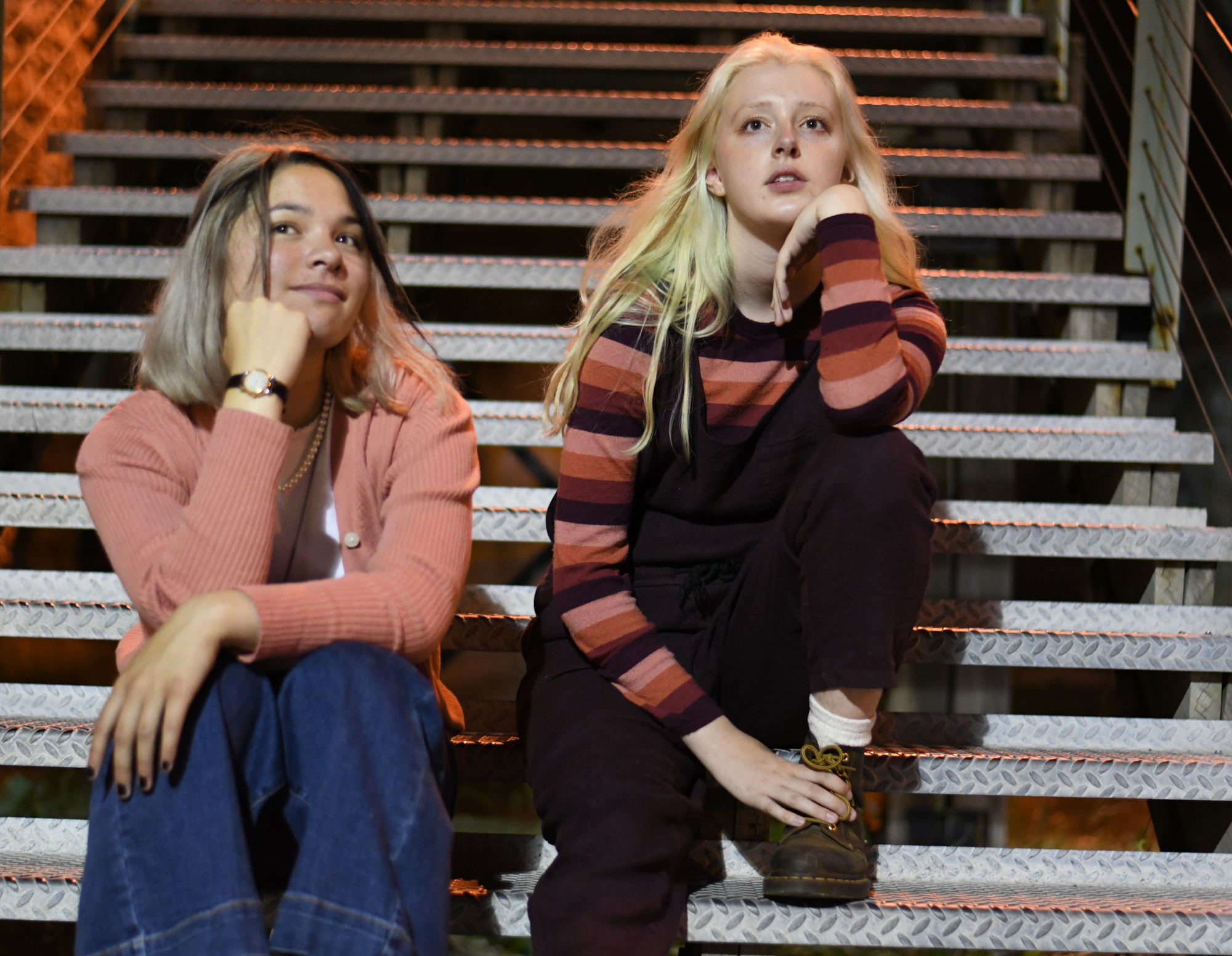 Baby and the Brain’s debut single, “For Finn,” was a joyously rocking encapsulation of the complicated nature of love and romance in the modern age. When we first heard it back in June, it immediately became one of our favorite tracks of the year. So, it was with great excitement that we read an email from the duo of AAPI producer/songwriter Jo MacKenzie and queer singer/songwriter Dia Jane were going to be releasing their debut album, BrainBaby, we had to reach out and find out all the details from Dia Jane.

After listening to BrainBaby, you’ll find yourself hooked in by the songs and charmed by the inclusion of off-the-cuff in the studio moments where the pair of Dia and Jo talk and laugh. It’s a touch which only enhances the intimate nature of songs like “Icarus.” Those intimate cuts are contrasted by the rollicking “PT Cruiser” or the country-inflected (with banjo!) “Sarah.” It’s all wonderfully different, but the harmonies and emotional honesty come through on every cut.

I spoke via email with Dia Janne about how she and Jo MacKenzie came together as Baby and the Brain and then came to make BrainBaby.

The Pitch: What was the process of writing and recording this first album like?

Dia Jane: It was tedious at times, because we’re both perfectionists and we wanted it to be the best we could give for our first project together, but the entire process was really fun and very special. We were seeing each other at least 5 times a week if not more, and we were able to have a lot of deep conversations and to make a lot of music that we love. The entire album was recorded in Jo’s bedroom studio, entirely written by us, and entirely produced by Jo. Doing everything ourselves was a ton of work, but gave us a lot of creative freedom to really execute our vision for this project. It’s really special for us as two young women, especially Jo as a self taught female producer, to be able to put our musical perspective into the world exactly as we envision it. We also got some amazing advice and help from friends and mentors, especially Addie from The Greeting Committee, and Jo’s mentor Harper James, a producer and artist in the band Eighty Ninety.

Specifically, why did you leave in the various little “in the studio” moments?

Sometimes when songs go through version after version, they can lose some of the emotion that was present in early demos, and we really wanted to keep the rawness of the songs while still making them polished. This project feels really personal and authentic, and we wanted to leave those genuine parts of our personality and process in so people can get a sense of our character! Leaving in those studio moments (and we actually cut out a lot from earlier versions, which made the ones we kept feel even more special) was a way for us to retain that joy and vulnerability we experienced while writing and recording.

When did the two of you meet and what made you want to make music together?

We met in 2017 at a Nelson Atkins Open Mic and stayed loosely in touch through social media, but didn’t really get close until early 2020. We were both participating in Art As Mentorship’s virtual programming and decided to hang out to do what was initially just gonna be a cover, which turned into writing a song, which turned into writing like 20. We just work together really well—we’re very different but we can read each other’s minds when it comes to what the other wants musically, and our creative styles really complement each other.

How’d you (Dia) come to work with the Whips on their album?

I met The Whips when we both did the You Matter Fest in 2020, and Max Indiveri just reached out to ask if I’d be interested in singing on their upcoming album. He sent me the scratch vocals for the track and I loved it, and it was a really fun and easy recording process. I also got the chance to sing the song with them at their 2021 You Matter Set, which felt so full circle! Those guys are all so nice and talented, it’s a blast working with them in any capacity.

Any plans to play live?

None set in stone yet, but we’d love to! Scheduling things like that is difficult because I (Dia) am away at college in Chicago most of the year, but we both love performing and really hope to be able to plan some live sets in the future.

BrainBaby is out today via streaming services.

A post shared by Baby and the Brain (@babybrainband)