Etheria Film Festival returns to Screenland Armour for one night only

Consider us particularly excited to see Come F*ck My Robot by Mercedes Bryce Morgan, based on the infamous Craigslist post of same name.

Festival director Stacy Pippi Hammon says that, as she watches each year’s submissions, she often discovers a central theme or genre that links them. This year, it was horror.

“You know, a couple of years into a pandemic, a lot of people are leaning more towards horrific things,” Hammon says. “It’s just artistically where you sort of go.”

Past festivals have featured several of today’s most exciting emerging female directors, including Chloe Okuno (Watcher), Anna Biller (The Love Witch), and Roseanne Liang (Shadow in the Cloud).

Etheria has showcased talented women in film since 2014, but it wasn’t until 2020 that Screenland offered a live, stand-alone screening of the festival. Since then, Hammon says Kansas City has become a “second home” to the LA-originated event.

“A lot of amazing women directors are coming out of this scene,” Hammon said. “It’s one of the things that originally welcomed us to into doing presentations (in Kansas City).”

The screening starts at 9 p.m, and for those who can’t attend in person, the event will stream July 19 via Shudder, AMC’s streaming platform for all things horror.

Tickets are $15 and are available here. 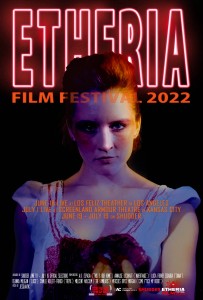 Check out this year’s lineup:

THIS IS OUR HOME

When a bleeding-heart vegan and her pragmatic roommate’s rodent infestation intensifies, they find themselves at odds regarding methods that are inhumane yet effective.

A black family in rural Vermont attempts to live a life of solitude and cope with the ghosts living on their property.

After surviving a late-night attack, Dana embarks on a mission of vengeance and violence that will change her forever.

At an art school in the 1990s, a young outsider embarks on a morbid quest for pure self-expression when she creates a self-portrait for her classmates that reveals her enchantment with the grotesque.

Jade considers FREYA (her Federally Regulated Enquiry and Yield Assistant) a friend, but when a one-night stand doesn’t go as planned, Jade is forced to question FREYA and the system she represents.

When a skeptical teenage girl inherits a mysterious heirloom, she must decide whether to use it to protect herself from her destructive Mother.

Based on a real Craigslist post of the same name, the film follows the story of Brian—an out-of-work, loveless loser who happens upon a job posting by an engineer looking for someone to sleep with a prototype sex robot.

For more information, check out etheriafilmnight.com.