Zweihänder and Blackbirds are the dark engines driving future legends 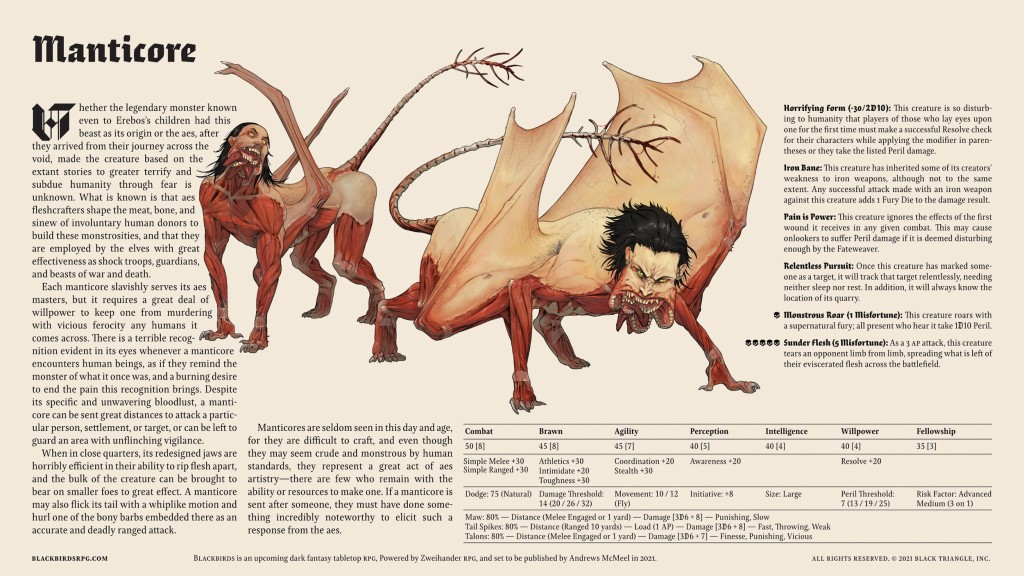 In 1971, a bunch of dudes got together for a role-playing game. They were ready to commit time and effort toward full immersion in an experience that promised high stakes and high rewards. They began crafting a story. Their characters would be honest, un-distilled representations of humanity. They would test the limits of their enemies and the limits of themselves.

Yes, in 1971 Gary Gygax released Chainmail, a game that would later blossom into what the world knows at Dungeons & Dragons. But the introduction wasn’t about Gygax’s creation—that was an explainer of the Stanford prison experiment.

Why draw the parallel between a tabletop game and an ethical crime in sociology? Because Blackbirds has the energy of both. 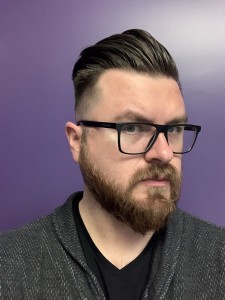 In 2017, Daniel D. Fox of Kansas City published Zweihänder Grim & Perilous RPG. The ENNIE Award-winning tabletop role-playing game (RPG) rocked the world of its genre—not just by being an incredibly fun time, but by running on a new game engine.

“Over the years, I became disenchanted with D&D,” Fox says. “I wanted a dark mirror to the real world. I’m fascinated by this period of time during the Bosnia-Herzegovina conflict and the violence around that. I wanted the ability to tell stories that can reflect that, and D&D was not the vehicle to deliver on it. So, I set out to make an RPG.”

Zweihänder is the tale of a nightmarish civilization and the horrific acts that it commits. As a game, it’s based on an ethos that mixes darkness with the brutality of mortality. This is not a wacky world for bards and wizards to faff about and inevitably stumble through solutions to their problems. Zweihänder’s baseline is that existence is unfair, and nothing will bail you out.

Combat in Zweihänder allows human-level creatures and characters to absorb only two or three hits without receiving an injury that will maim, kill, or permanently injure a character. There are no regeneration or resurrection powers in Zweihänder, and only limited healing options. Fate Points, which represent a character’s fate or destiny, provide a limited number of opportunities to avoid maiming or killing results. Fortune Points allow a character to avoid some perilous situations.

“How do you mechanically take the outcomes of the morally gray choices you have to make?” Fox asks. “In the traditional gaming situation, orcs attack a town and you need to murder all of them because otherwise, no one is safe. But the characters are rarely ever faced with the moral consequences of that. It never deals with the aftermath. In our game, your character goes into a tug-of-war internally, and it means that your failures are as important as your successes. Dealing with the mess is what sets us apart, because how you respond drives where the world goes next.” 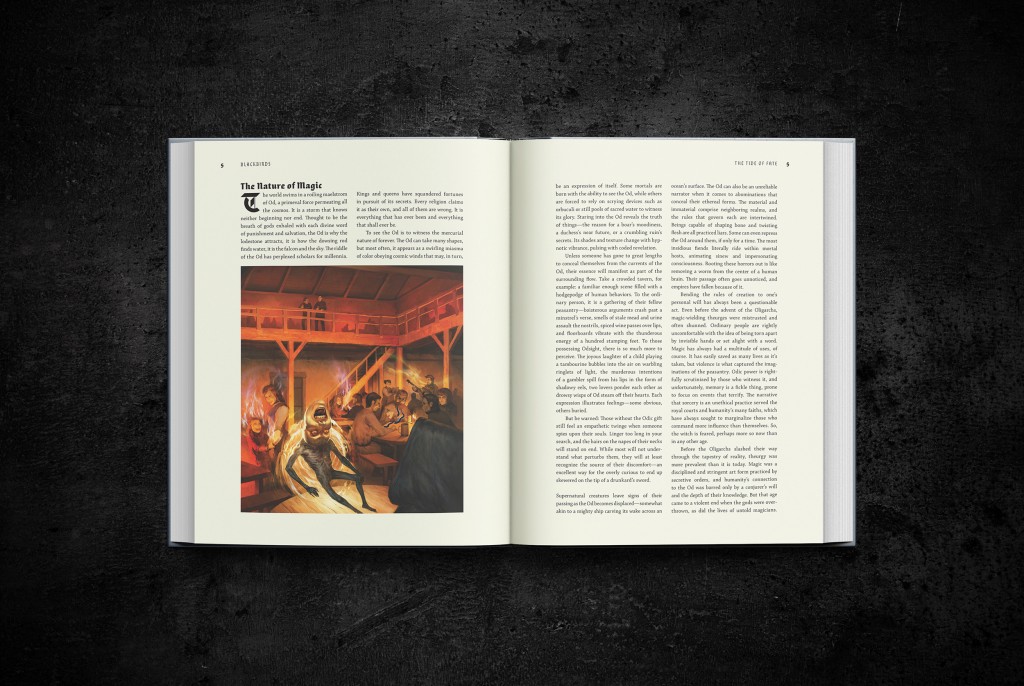 So, here’s the thing about Dungeons & Dragons.

Gygax’s ‘70s game has evolved and sprawled into a world all its own. By this point, most tabletop RPGs are, on the inside, powered by D&D. The rules for how a tabletop experience functions are often couched within the framework of a specific variation of Gygax’s rulebook. That baseline allows creators to craft new worlds, themes, and experiences by grafting their creations onto a functional set of gamic principles.

This is an excellent tool for storytellers who just want to tell their stories. Not everyone wants to sit down and do the math required to reinvent the wheel. It also means that a huge monolith in a genre of entertainment—RPGs—has a feeling that’s too familiar.

Beyond the inherent experience limitation this creates, there’s also The Gygax Problem. The world of D&D has long been deemed by critics to be sexist, racist, and generally problematic. 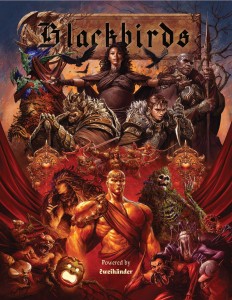 A mockup of the Blackbirds cover. // Courtesy Andrews McMeel Publishing

While the game’s publisher, Wizards of the Coast, has spent the better part of the last decade trying to diversify and update the game, adding non-binary pronouns to the character creation does not solve for the rot inherent in the walls.

Gygax was what many have deemed “something of an asshat,” which is tidily summarized in an interview he did with Icon magazine.

“[Gaming] in general is a male thing,” said Gygax. “Everybody who’s tried to design a game to interest a large female audience has failed. And I think that has to do with the different thinking processes of men and women.”

His perspective on life should not be the lens through which all stories are told. Which is what puts the revolution in the Zweihänder gears. The game is a local solution to a cosmic problem.

Andrews McMeel—a publishing house based in Kansas City—saw the potential in usurping the old guard of tabletop games in this weird, dark little Zweihänder package that Fox put together. Rather than simply publishing the game, they set Fox to the task of expanding his grim machinations into a scalable game engine—one that could give voice to a generation that craves something more. Now, Fox leads McMeel’s gaming division.

Back in September, Blackbirds launched on Kickstarter and quickly became the most successful crowdsourced project in Andrews McMeel history. With a retail date now scheduled for Aug. 9, 2022, and a planned event for Gen Con 2022 in Indianapolis, this engine is rumbling around the corner very soon with its own brand of apocalypse. 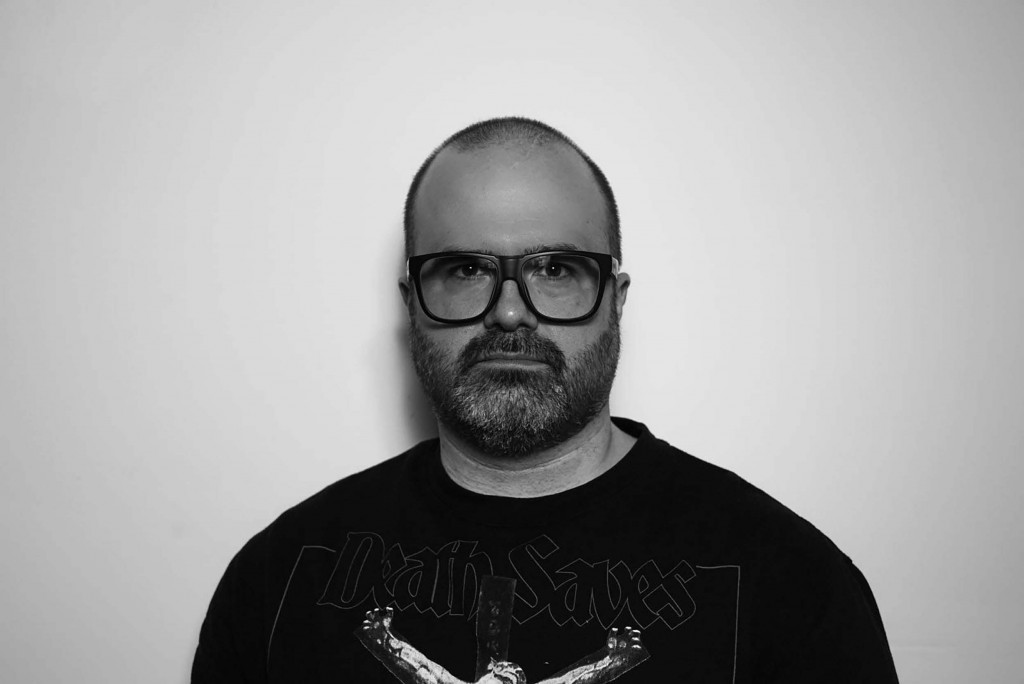 The game drags its players into a world ravaged by 12 years of war, where the gigantic battle to save the world was fought…and lost. Now, the lights of civilization are going out. Swells of refugees have taken to the roads, desperate to find homes far from all the suffering. Creatures of long-forgotten folklore once again stalk the countryside.

It promises to stalk our imaginations as well, as a stand-alone experience set in a different universe from Zweihänder. How could it not, when it represents the foundation of a new gaming empire? But Verniere doesn’t want you to play it by his rules alone.

“It’s a book of stories and rules, but I’m not here to say that you’re doing it wrong, no matter what you do,” Verniere says. “I don’t give a shit how you play your games; you should play your games in a way that’s right for you and your table. I’m just giving you my game and then you can do what you want.”

It is a time of ill omens and unlikely heroes. There’s an excitement to be had in knowing that, however your story plays out, every decision matters—both in this universe and the one that sits on your kitchen table. That the boundaries of your perception are being defined by some guys in Kansas City remaking the world for the better? That’s just an added local bonus.