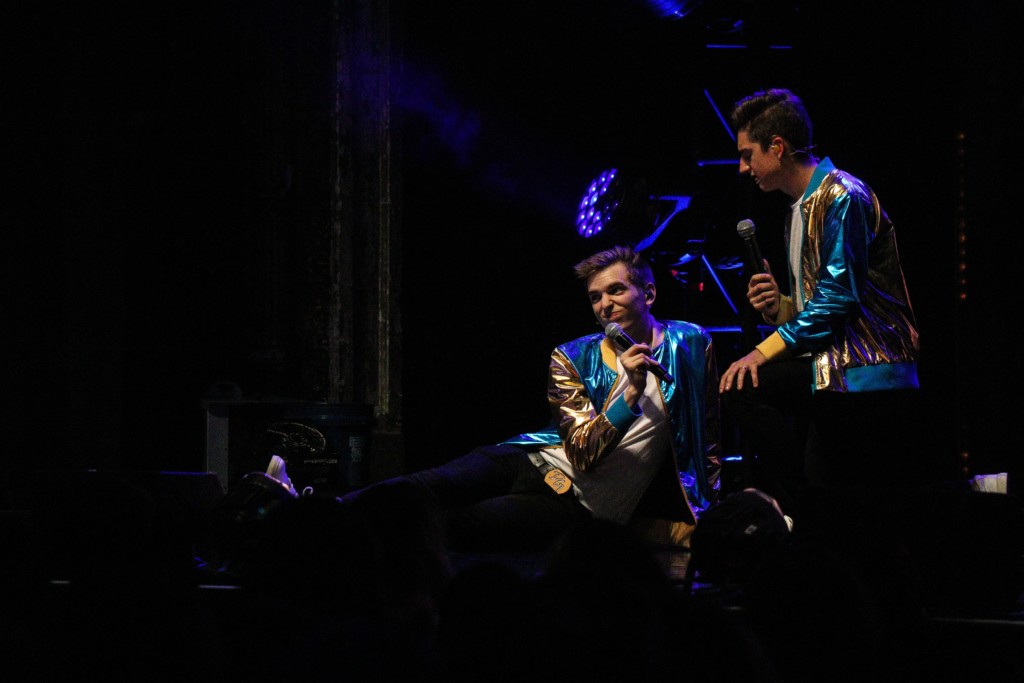 Photo courtesy of We Are Two Different People Tour

Danny Gonzalez and Drew Gooden have had very similar careers. They both started on Vine, switched over to YouTube, and now make commentary videos, often on the same subject matter. Lately, Gonzalez, who has 2.95 million followers, and Gooden, with 1.72 million, have been collaborating on videos about things like TikTok cringe and the Jeremey Renner app (which has since been taken down). A lot of people think they are the same person.

They’re leaning into that perception with the title of their upcoming comedy tour together: It’s called the We Are Two Different People Tour. They’re in KC this Friday, October 4, at the Truman, and we recently chatted with both about life on the road as a couple of YouTubers and what to expect at the show.

The Pitch: For our readers who aren’t big on YouTube, how would you explain your tour?

Drew: It’s just a comedy show. That’s our goal. There are things that tie into our YouTube channels, but what was fun about writing it is you’re trying to make something that exists on its own, and someone who doesn’t know us can come to the show and enjoy it. We take some elements from other YouTubers and other YouTube live shows and kind of parody them, but we really wanted to make something that was just funny on its own. So it’s just a weird comedy. Without spoiling too much, it did get kind of crazy in the second half. It just kind of crescendos into this weird finale. But yeah, we just wanted to make just a straight up comedy show, and we’re really happy with what we created.

Danny: I guess I would describe it as the main show almost feels like if two people were doing standup at the same time. Because it’s like we were both standing on stage with microphones and telling jokes, but we’re sort of bouncing off each other. There’s sort of like a loose plot to the entire thing as well. So it’s like a mix between standup and sketch it and a theatrical play. There’s a lot of production elements put into it rather than it’s just standing there—like, we get the lights involved. There’s a lot of sound cues and a couple songs in there. It’s very theatrical.

There have been some YouTube tour fails—like TanaCon and Team 10’s tour—which Drew did a video about. What have you learned from those tours that you’ll either poke fun at or improve upon?

Drew: It’s funny you say that. With Jake Paul’s thing, that is one of my most popular videos. So to, you know, have my most popular video be about another YouTuber tour and then going on one myself—I have to be really careful not to be hypocritical of the things I made fun of. We can’t just go and do those things ourselves. I think we’ve learned the most just from doing the shows, and the shows have kind of evolved as they’ve gone on. There’s things we wrote that we thought were funny when we wrote them and then we performed them a few times and they just haven’t, you know, hit the way we thought they would. So then we’ve had to adapt them and figure out ways to make them work better on the stage. And also, in regards to TanaCon, we’re trying to make sure no one has to stay outside for several hours. That’s one thing we learned from that.

You two are very similar, hence the name of your tour. Because you have overlap in content, what made you become friends and not, well, enemies?

Danny: Oh, that’s interesting. Yeah. I guess if we were slightly more, like, envious people or something or competitive—

Drew: We’d hate each other rather than being friends.

Danny: Yeah. So we’ve known each other since we both did Vine, which was probably like four years ago when we started talking. We met for the first time when we were doing Camp Unplug, which is a production that Vine did. It was sort of like a short film that Vine made. And then once Vine ended, we were both simultaneously trying to figure out what we could do on YouTube. We tried out a bunch of different things independently, like making longer versions of Vines, like sketches, on YouTube, and just trying a bunch of different genres, and we both eventually ended up on doing commentary videos. That gave us a reason to talk a lot more than we had before, because we would talk about what videos we were working on and the response to our videos and stuff like that. So that sort of, I think, helped us grow our friendship and then we ended up collab-ing.

Drew: I think a big thing is we’re both fans of each other. Like, I like Danny’s content, I assume he likes mine. We work really well together, so rather than looking at a video that he did and being like, “Oh, that got more views than mine did,” and getting jealous, we’re supportive of each other, and it’s fun to work together. So we see it as a mutually beneficial relationship. Getting to work together makes it a lot more fun too—to share it with someone else. This tour would not be nearly as fun if it was just me by myself.

You guys don’t live in the same state, correct?

Danny: I live in Chicago.

Drew: It gives us a reason to fly back and forth to, you know, not just hang out but like, “Oh, it’s a business trip cause we’re making videos and we’re, you know, working on the tour.” We were flying back and forth every few months to write more of the tour.

How has the tour been going so far?

Danny: It’s been really interesting just getting used to the tour life. I think I was more tired during rehearsal than I am now, luckily. I feel like performing the same thing and performing such a long show exercises this part of the brain that has been inactive in my brain for so long. During rehearsals, after a long day my brain would just be fried. I would just lay in my bed all night. Not want to talk to anyone, but I think we’ve both sort of gotten used to it. There have been weird things like—I think we both lost a lot of weight since the tour started, because we get really nervous before the show and that’s when our dinner shows up, so we just don’t eat dinner. Um, we’ve kind of gotten over that, I think?

Drew: We’ll scarf it down when it’s cold. And then drink one beer and fall asleep. Yeah, it’s definitely been an adjustment, but it’s gotten easier as it’s gone on. We’re used to sleeping in bunks now and on a moving bus and we’re used to not getting as much alone time as we would before. I think the hardest part for both of us is getting away from our wives because we’re used to seeing them every day and never really going more than a couple of days without them. I think it was a month I went without seeing Amanda until I could see her on the Florida show. So that’s probably the hardest part. But you know, this is our career and this is an exciting new thing for us, and it’s a fun experience.

Is this your first time in Kansas City?

Drew: I don’t think either of us have been there before. Certainly we’ve never performed there. I’ve been, just passing through. We’re excited to see the city. You have any recommendations for things we should do over there?

We Are Two Different People Tour

Friday, Oct. 4 at The Truman