Why does this Scientology rap video have a fake Andy Reid? Well, we live in Hell.

Just not a headline we thought we'd have to write today. And yet.

[Update: We interviewed Matt Black—Almost Andy Reid—about this bizarre situation he found himself in. Like the rest of KC, we’re big fans, and equally perplexed as to why someone would involve him in this. Check out the interview here.]

It has been confirmed by The Kansas City Chiefs that Matt Black, an impersonator of head coach Andy Reid, was in a Church of Scientology music video—and not the actual Coach Andy Reid, as social media believed it to be.

Tony Ortega, an investigative journalist who has written about Scientology since 1995, made this information public to his 28,600 Twitter followers Wednesday.

The Kansas City @Chiefs tell me that this is "Almost Andy Reid," a man named Matt Black, and not the coach himself. He appears in a hip hop video promoting #Scientology propaganda and it's made by Scientology's production unit, SMP. (2nd item: https://t.co/hvb4lQJKa8) pic.twitter.com/sPbhiqWtZc

Reid, who has self-identified as a Mormon, would be an odd pairing for this kind of propaganda. And yet, confirmation of whether this was Reid or not seemed difficult to obtain for most of the day.

Ortega’s summary of The Church of Scientology says followers believe we as humans are trillion years old with these immortal souls that go from lifetime to lifetime.

“But they know that’s weird and so they never talk about it,” Ortega says. “They don’t allow their members to talk about it. Instead, they have various groups they use as fronts.”

One of the fronts is the Way to Happiness Foundation who prints the book The Way To Happiness featured in the music video for “Hold Yo Head Up High” by Tha Real Kodde One. In the video, Black is standing next to Tha Real Kodda One who is holding this book.

The video is listed as being produced and filmed by Scientology Media Productions, with lyrics in the video promoting Scientology. The chorus repeats the phrase, “Hold your head high, we’ve got the way, we’ve got it, The Way To Happiness”. 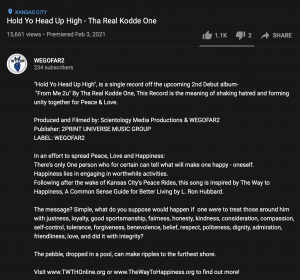 According to his Spotify bio, Tha Real Kodde One self-describes as:

The P.Diddy of Kansas City, the President, and CEO of WEGOFAR2 -Tha 2Print Universe Music Group. As a talented Artist, Songwriter, and Producer The Real Kodde One is on the rise of becoming a mainstream music MegaStar. In the early millennium he Co-Founded Flawless Mafia International Music Group (FMIMG3), and created Goon Mobb Squad Entertainment, and later discovered WE SEW KC. During his music tenure he has written hundreds of original songs, recorded mixtapes, and produced over a thousand hit singles.

Thousands of hit singles seems a bit of a stretch for a musician with 30 monthly listeners and 79 followers. His song “Big Ol Butt” is available for streaming below. It asks the questions about what you’re doing over there with “that big ole butt” but promises that the protagonist of the song believes in safety first: “Bitch, I ain’t got Corona, I’m just smoking too much.”

Nothing else in Mr. One’s discography seems to be overtly supportive of any particular religious or social ideology, save the worship of butts. The art for the track does, in fact, include an unlicensed Family Guy character making it rain on a woman in a scooter and a glowing truck.

Underground Bunker, Ortega’s daily blog on Scientology, received a tip from a reader about a music video featuring many Kansas City landmarks and Andy Reid.

“You have to wonder why Scientology would do that,” Ortega, the managing editor for The Pitch from 2003-2005, says. “That looks bad for Scientology.”

Ortega contacted The Kansas City Chiefs as well as Scientology Media Productions for answers about Reid’s appearance. The Chiefs eventually responded after investigating to say it was Black in the video, not Reid.

Matt Black, the Andy Reid impersonator, has a huge following on TikTok. In January, he was profiled by Fox 4.

The Pitch reached out to Mr. Black for comment and it seems clear he had no idea what his footage was being used for, nor what the video was advocating.

I have no real clue about that, but I remember being at Arrowhead and asked to take some pictures. If it was Scientology, I definitely was not informed.

“Scientology is an abusive organization,” Ortega says. “It splits families apart. They extort people financially. They have a group of people that are so hardcore, they’re called sea organization members inside billion-year contracts.”

Professional women's soccer is live in KC for the first time in 1,003 days