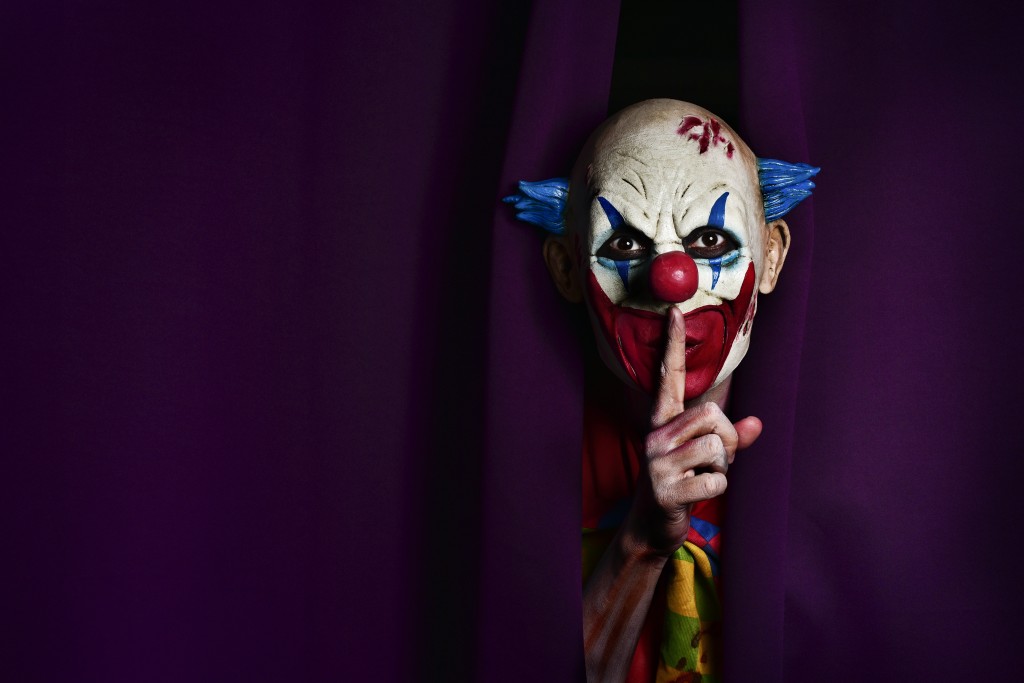 In our childhood, all of us had That Goddamned Thing that haunted us from pop culture. That thing in a movie or TV show that we’re still talking about as adults; that we’re still thinking prevents us from doing certain activities or what-have-you. We’ve had some time this week to be a bit stir-crazy, and so we started chatting. “What’s your damage?”

Well here’s our damage. It’s just good to remember a time when our traumas weren’t all… *gestures outside*… the same trauma.

This is what members of The Pitch staff had to say. What’s yours? Let us know on Twitter or Facebook.

PeeWee Herman. My brother watched the videotape over and over. I was particularly traumatized by Large Marge EVERY time. The whole thing felt off to me. I still can’t watch a second of any PeeWee show or movie. I also cannot handle when people use weird Pee Wee-esque voices to this day.

“Devil Worship: Exposing Satan’s Underground,” a very special episode of “The Geraldo Rivera Show,” 1988. I tuned in because Iron Maiden and Ozzy were featured in the commercials and I was always up for some metal footage, but I was unprepared for the assertion that Satanic torture killers were around every corner, especially given that Kansas City was painted as a potential hotbed for ritualistic child murders (because of the Bob Berdella case, which was recounted in lurid detail). I remember being reassured somewhat a few days after it aired when a friend’s mom pointed out that one of the scariest-seeming guys (Anton McVay, founder of the Church of Satan and prominent figure in Geraldo’s documentary) was “a former lion tamer, basically a loser.”

I had an irrational fear about King Friday & Lady Elaine from Mr. Rogers. Their stationary mouths & creepy voices still make my skin crawl. Is a coincidence Lady Elaine looks exactly like the modern-day villain in The Saw movies?  I think not.

I hate what I’m about to share because I cannot place where it comes from, which is inherent in the tale. I was with family and we were channel surfing. I believe I was four. We had a free weekend of one of the early paid networks, like Showtime. Basically in the time it took to change channels, which used to be quite long, I witnessed five seconds from a slasher film where a man slit a woman’s throat open and blood shot everywhere. I had a very sheltered childhood. I wasn’t allowed to watch Ren & Stimpy. This was life-destroying. My mom scrambled to stop my crying, and explained that it was fake. It was just ketchup. Or pizza sauce.

I’m in my mid-30s. To this day I cannot enjoy pizza with red sauce or any form of marinara. The moment it touches my tongue, my brain tells me “That’s blood” and the flavor turns to nickles. I carry just… the dumbest possible emotional baggage from this. I don’t want to say my story is the best story here. But my story is the best story here. Because no matter what I do, as an adult goddamned man, I just can’t overcome it. Lol. Totally rules.

This is going to date me, but The Exorcist scared the living crap out of me when I was a teenager. If memory serves, I intentionally traumatized myself by watching the movie AND reading William Peter Blatty’s novel of the same name. The film was so disturbing that moviegoers were reported to faint, vomit and even suffer heart attacks and miscarriages. I didn’t experience anything like that, but to this day I remember with sheer terror the exorcist coming for the demented girl, Regan (actress Linda Blair). Now I wonder why we scare ourselves with movies when real life is pretty damn frightening to start with.

(Editor’s note: Kelcie, while being the member of our staff who is most open about all of her traumas and other mental health issues, cannot think of a single pop-culture related trauma. “I was fucked up by real people.” So… she gets a pass on this one.)

I saw the Disney movie Something Wicked This Way Comes when I was nine, and it profoundly disturbed me for years. It was part of the weird series of more “serious” live action movies that Disney produced in 70s and early 80s that were meant for a “mature” audience, but were so odd they ended up being for nobody. In this case, Disney hired Jack Clayton, who also made The Innocents, to direct a Ray Bradbury-scripted adaptation of Bradbury’s novel about a demonic carnival, headed up by a goth Jonathan Pryce, that comes to a small town in the middle of the Great Depression. You know, standard family fare. Pryce grants the townspeople their dearest wishes, but at a terrible cost. A former football star wants to be young again, and he’s turned into an evil child. An old woman is made beautiful again, but she’s blind. There’s a fantastically scary bit at the end involving a haunted carousel. Also, there are evil carnies, and Pam Grier plays a witch. I think it’s great now, but I’d never make a kid watch it.

It was the Adventures of Tintin. It was the intro, which was really intensely paced. And then there was the skeleton monster. He really scared me, and it fucked my 90s brain up. It was too real for my young mind.

Thank god for quarantine, otherwise I would never have had time to rediscover the anthropomorphic nightmare that is “We’re Back! A Dinosaur’s Story.” To give you a working knowledge of the 1993 horror show, I draw upon a review from Rotten Tomatoes.

“Parents seeking innocent kiddie entertainment should know that the dinosaurs are drugged, the children are briefly transformed into monkeys and the Professor is eventually devoured by crows.”

Thank you, Janet Maslin, for this wonderfully long way to articulate what we’re all thinking. Which is “WHAT THE ACTUAL, UNHOLY FUCK.” The only good thing about remembering that this movie is that now I can pinpoint where it all went wrong. It being my psyche. If seeing an adorable dinosaur version of John Goodman be transformed into the “10 Cloverfield Lane” version of said Cretaceion doesn’t scare the shit out of your child, it’s time to send them to war, because nothing will break them.

I have two traumatic moments I can think of when it comes to childhood & horror movies. One story’s been done to death so I’ll reveal something shocking now. I was partially terrified of Gremlins 2, for years. Now, it wasn’t the full film, mind you, but one particular creature. Specifically, the Electric Gremlin.

Yet understand that having a fear of the unknown & lingering fear from momentarily watching another movie, a few months, is another ordeal altogether. To out it plain, I may have seen a friend’s older brother watching Shocker, before viewing Gremlins 2. Should you not be up to date on a late 80’s, mostly forgotten Wes Craven film, that’s ok. The main bit involves Mitch Pileggi as a serial killer, who is sentenced to the electric chair. Since this movie is completely nuts, Pileggi becomes electrified & can travel through outlet sockets.

Now, if your a child and imagine seeing a serial killer made out electricity one year, followed by an electric gremlin the next, you get the picture. The second the gremlin appeared, it took me back to the sneering, seedy murderer and I checked right out. A very “Uma & Oprah” moment. A reference just as dated as the movies mentioned above. The key here is that you never know what’ll scare you. Facing, accepting and embracing your fear, is the best medicine. It just helps when you can look back and laugh at the thing that once was so scary. As far as ridiculous electrified villains go, that is.