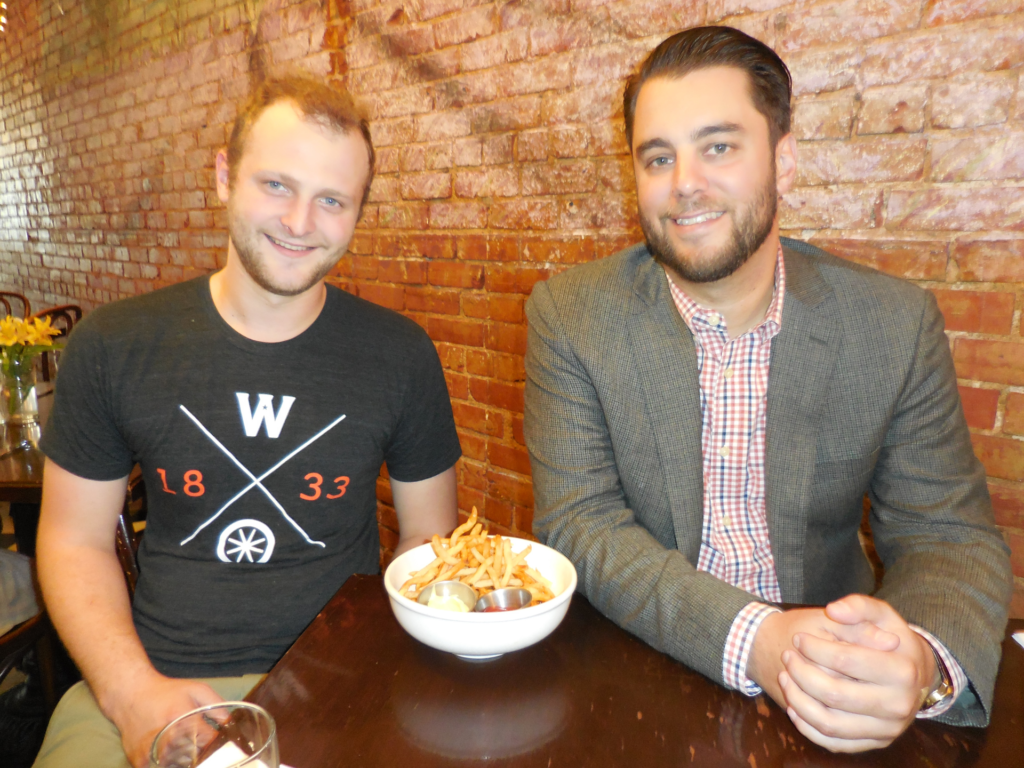 Instead of making birthday cake, Aaron Confessori and Rich Wiles, the co-owners of the Westport Cafe & Bar, are celebrating the venue’s fifth anniversary with free frites. It’s an offer good through the end of June.

When Confessori was a 19-year-old college student at Wichita State — majoring in ceramics — he would make the occasional foray to Kansas City, and he liked going to Westport to see the variety of bars and restaurants.

“I remember sitting in a Westport restaurant, back in 1996, thinking, ‘One day, I’m going to own one these,’ ” Confessori says.

Less than a decade More than a decade later, after completing culinary school in New York City, Confessori took over the original Blanc Burgers + Bottles space at 419 Westport Road and transformed it into his ideal 60-seat bistro. One of his first employees, 19-year-old fledgling chef Rich Wiles, became indispensable in the kitchen.

Today Wiles and Confessori co-own the popular restaurant, which turned five years old yesterday, June 16. As part of the anniversary festivities, Westport Cafe & Bar is giving all customers who come in for a drink or a meal a complimentary bowl of the venue’s golden, crispy fried potatoes, pommes frites. This offer is good through June 30, 2015. “You have to order something to get them,” Confessori says.

“And dine-in only,” Wiles adds.

What have been the biggest changes at Westport Cafe & Bar in the last five years?

“The menu has grown and shrank at the same time,” Confessori says. “We’ve added things, taken things off, tweaked old favorites and added brunch — one of our busiest shifts — six months after we opened.”

When Confessori first took over 419 Westport, that particular stretch of restaurants and retail on Westport Road was going through one of its occasional upheavals. “There were three restaurants that were either closed or in transition,” he says. “And we weren’t an immediate success. The first couple of years were touch and go. But we’ve done very well here. This year we had a 40 percent jump in business.”

A big component of Westport Cafe & Bar’s success has been the addition of a special-events company, Signature Events, that Confessori and Wiles launched three years ago: “It’s not a catering company,” Confessori says. “We don’t do food off-site, but we do everything else. We provide the liquor, the staff, the set-up and anything else required to create a successful party or reception.”

A less successful venture was the short-lived Italian restaurant, the Boot, that the Westport Cafe & Bar co-owners opened in 2012 in the space next door at 415 Westport Road; the cozy Italian trattoria closed after a year.

“We were doing twice as much work,” Confessori says, “and making less money.”

Confessori gave up his lease on the location, which is in the process of being turned into a Papa Keno’s pizzeria — the tenant who occupied 415 Westport before Confessori and Wiles created the Boot.

“Papa Keno’s has new owners now, and this new restaurant will be based on their Lawrence location,” Confessori says. “I think it’s going to be a great addition to the neighborhood.”

Confessori says his greatest lesson in five years was learning that he couldn’t take certain beloved dishes off the menu — ever.

“When I decided to switch out the pea ravioli for a different kind of ravioli,” he says, “it was like a mutiny.”