And, thusly, they became My Hero. 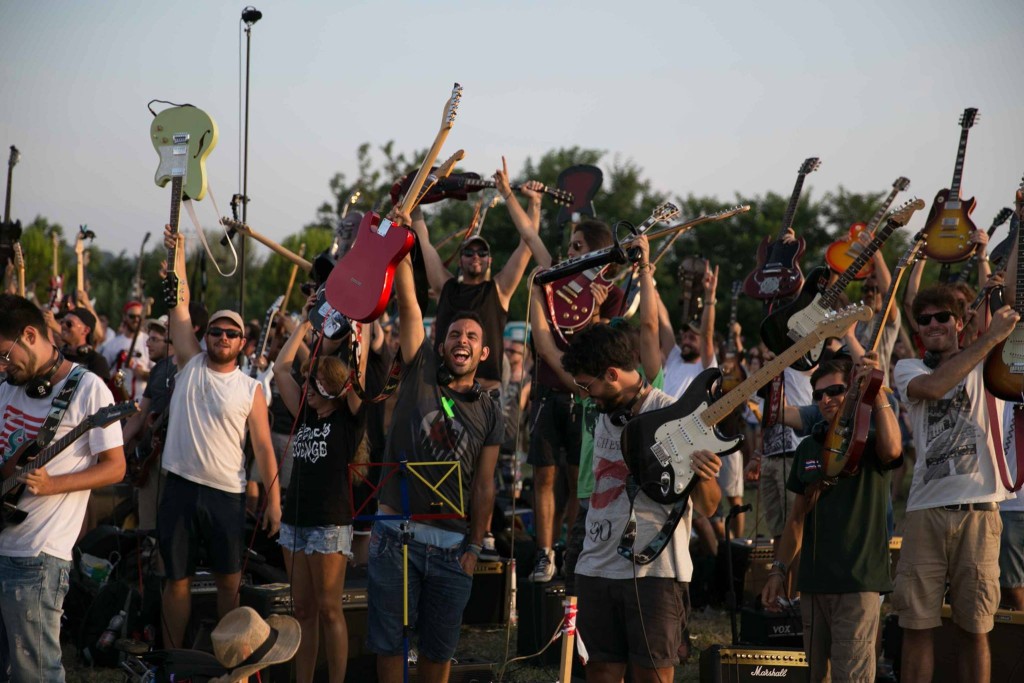 Rockin’1000 prepares for the performance that will change the lives of everyone in the band. // Courtesy Blue Box Entertainment & Breaking Glass Pictures

You don’t have to be a Foo Fighters fan to remember when Italian supergroup Rockin’1000 defied expectations with a one-thousand-person cover of “Learn to Fly.”

Now, nearly seven years old, the viral video that captured the performance soars with more than 60 million views. An army of drummers, guitarists, bassists, and vocalists simultaneously playing to the same, complicated beat is a creative feat, so the story behind it had to be just as interesting.

Enter We Are the Thousand, an hour-and-a-half-long documentary that tells the Rockin’1000’s story from front to back.

His goal was a humble one: bring Foo Fighters to the small town of Cesena, Italy, to play a show. Zaffagnini’s idea to gather 1000 rockers came hand-in-hand with the goal, but We Are the Thousand makes it clear that no one expected the scheme to come together so easily.

The “Learn to Fly” cover video was published only around seven months after the initial call for a mob of musicians happened in late 2014. I loved seeing how shockingly well that first rehearsal went, or why “Learn to Fly” was chosen as the song Rockin’1000 played instead of one of the other dozens of Foo Fighters songs.

The journey is compelling, but the doc doesn’t do much to make that journey pop. We Are the Thousand is mostly a static peek behind the curtain at a genuinely fascinating accomplishment. Most of the shining moments come from the behind-the-scenes footage of rehearsals, leaving a majority of this interesting story to be told through a somewhat bland lens.

However, what makes We Are the Thousand slightly more than a simple retelling is the 1000 band members, who each have their own lives, passions, and hopes beyond one big show. Every missed cue and each satisfying strum comes from musicians no less real than Dave Grohl himself, making their victories feel all too sweet. Zaffagnini, Mohawk Guy, and other standouts like them are the backbone of this doc, and they make We Are the Thousand worth watching.

It’s worth mentioning that We Are the Thousand will be available for US audiences to watch later this week, a little more than two months after Foo Fighters drummer Taylor Hawkins unexpectedly passed away. The documentary, which was finished well before his passing, still finds time to celebrate Hawkins, even if it’s only for a moment.

It’s no secret that Foo Fighters eventually made their way to Cesena to play that show after catching wind of Rockin’1000. During the long-awaited performance, Hawkins steps down from his percussion throne to let one Rockin’1000 member take his place for a song. It’s a beat that carries new weight following Hawkins’ death, but it is also one of many moments in the doc that highlights the band’s impact.

“Learn to Fly” was Rockin’1000’s rocket launch into a future filled with more performances like it. Yes, they still do this, and yes, it’s always unbelievable. The most recent performance is just a few days old, with Rockin’1000 performing a cover of Foo Fighters’ “My Hero” as a tribute to Hawkins’ unmatched talent.

We Are the Thousand’s greatest accomplishment is that it manages to be a documentary not only for Foo Fighters fans but everyone else, too.

We Are the Thousand premiered at SXSW 2020 where it won an Audience Award. The film opens in theaters and arrives on digital platforms June 3, with distribution being handled by Breaking Glass Pictures and Blue Fox Entertainment.