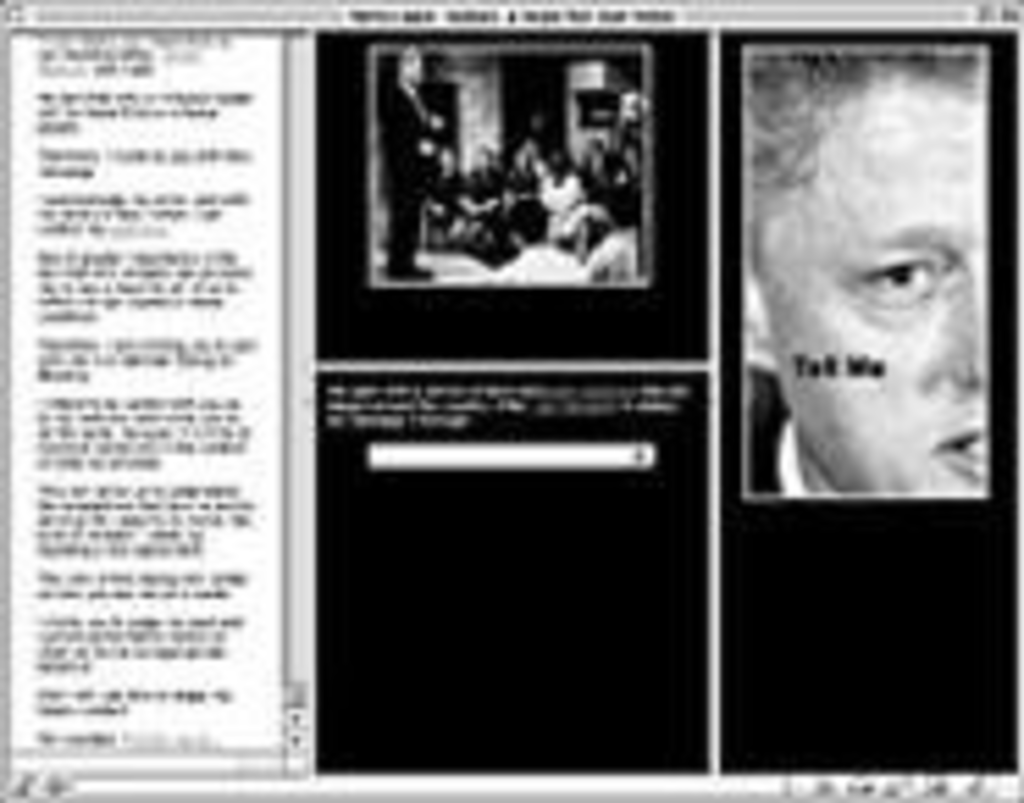 In the Mollien Room of the Louvre Museum hangs an extraordinary oil painting by nineteenth-century artist Eugene Delacroix. The Death of Sardanapalus is lush and wild and contains the most sumptuous reds I’ve seen in a work of art. I want to own this painting so I can look at it every day of my life. Sadly, this will never happen. There’s only one Sardanapalus, and it’s priceless and far too big for my modest walls. Until I can afford another trip to Paris, I must admire the painting from afar (4,541 miles to be exact), revisit it in fallible memory or look at reproductions in art books that cannot possibly duplicate the sensuous reds of the original. Visual art is bound by real time and real space and, therefore, is undemocratic, just as books were undemocratic before the invention of movable type in the mid 1400s.

Fast forward to … now. It’s 3 a.m. I turn on my computer, log onto the Internet and type in a Web address that takes me to an original work of art. Forget about costly airfares, unreliable memory or bad reproductions. This is the real thing, and it’s sitting on my desk, 24 hours a day, every day. Web-based art is a burgeoning medium born on the information highway. Granted, some artworks are roadkill that just didn’t make it across the virtual autobahn in their attempts to link technology with art. Yet they remain online, littering cyberspace and making it harder to find — and define — successful artworks.

Interpreting art is difficult enough in traditional genres, let alone in a genre that’s still trying to define itself. Let’s begin with what Web-based art is not: It is not the transfer of a traditional artwork, such as an oil painting or poem, to the Internet via merely copying and pasting it onto a Web page. And, at the risk of insulting a large population of talented technicians, Web-based art is not merely designing Web pages. Rather, it is an exploration of the unique aesthetic possibilities inherent in computer technology, specifically the Internet. Typically, Web artworks are interactive, requiring the participation of the viewer and/or listener. Artists use the computer to create the way oil painters use a canvas, musicians use a piano and poets use the page.

One commonality among Web-based artworks is the convergence of traditional media: video, animation, audio, still imagery and text, or any combination of these. At this point in the genre’s infancy (its unofficial birth date was 1994), such polygamy seems to be primarily the result of a “just-because-I-can” mentality. The result often is a virtual cacophony, prompting in the viewer an overwhelming desire for a nap.

“A lot of the Internet work now being produced suffers from a lack of clarity,” says James Martin, former assistant curator of modern and contemporary art at the Nelson-Atkins Museum of Art and current art curator for Sprint. “In striving to be complex, many artists end up confusing the viewer by sending him or her off in a multitude of meaningless directions in either composition or content. Richness should be layered, not impenetrable.”

But there are fine exceptions to such aesthetic transgressions, and some are springing from Kansas City. George Thompson, director of the visual arts and music program at Johnson County Community College, began creating Web-based art in 1997. He is explicit in his definition of the medium — “nonlinear, interactive, didactic, provocative, intimate and informational” — and attempts to adhere to these rules in his own work. Judas, a Man for Our Time is, he says, “a tale of betrayal that offers us a startling insight into how we arrive at the point where we are.” That point is the President Clinton/Monica Lewinsky scandal. Textually narrated by an unnamed public relations expert, Judas is an attractive, intelligent and sometimes comical collage of video, still images, text and audio created by Thompson or appropriated from the media. Viewers are allowed to read, watch, listen, vote and become permanent parts of the piece by entering comments about their own struggles with fidelity.

“George Thompson is the only [Kansas City] artist I am aware of who consistently produces quality Web-based art that is ready for public consumption,” says Martin. “As artists working with the medium gain more experience, works that will stand the test of time will meet criteria not so different than ‘analog art’ [e.g., paintings, photographs, sculpture]. Artists will also realize that there are a variety of audiences for Web-based art and different viewing aesthetics.”

One audience may be attracted to the more abstract artworks at www.visuallistening.com. But viewers should keep in mind that this site was designed less as a performance or exhibition space than as a virtual studio where Web surfers can drop by to see what artists Jeffery Mau, Chris Willits and Isaac Levy are working on. Nevertheless, much of the work is refined and, more important, exemplifies the creative potential inherent in the medium.

“Visuallistening is centered around the idea of collaboration,” says Mau, who has used a computer since age five, worked on the Internet for the past four years and earns a living as a Web designer (also at Sprint). “[Artists at visuallistening] are making work that either involves or responds to one or all of the three participants on the site.” Again, artworks embrace a variety of disciplines, “from audio and visual media to the sciences and architecture, and the blurring that occurs when the combinations are recognized,” he says.

Mau is the only one of his group now residing in KC. Willits, a graduate of the Kansas City Art Institute, is in California completing his master’s of fine arts degree in sound design, and Levy lives in New York. Soon they’ll add a fourth collaborator from Seattle. “One of the traditional excitements about the Web is that it does not matter where you are,” says Mau. “We are in the process of inviting more artists to come and collaborate.”

In addition to enabling long-distance collaboration, Internet and laptop computer technology allow an artist to set up a virtual easel almost anywhere in the world. Three months ago, George Aguilar resigned as president of the National Poetry Association, gave up his home in San Francisco and became a nomadic artist, creating what he calls “Cin(E)-Poetry” on a ten-month journey that will take him from Canada and the United States to South America, Europe and Asia. During his Mother Earth: Cin(E)-Poetry Tour, Aguilar will build a body of visual and audio poems based on his travels (which recently included Kansas City and Sedalia, Missouri) by using his own text and imagery, or the poetry of those he meets along the way. Like Thompson, who feels audience education is a part of his artistic responsibility, Aguilar intends “to show poets and writers that using cinematic techniques and the Internet will get their work seen by more people in newer, more dynamic ways. I also want to show visual artists how poems make for natural ‘screenplays,’ which allows them to be more creative and innovative without experiencing the high cost and commitment length that traditional, linear filmmaking produces.”

Admirable goals. Yet the experience of Web-based art often falls short of its aim, and the medium is not as democratic as claimed. A recent PC Data report estimated only 52 percent of the U.S. population is connected to the Internet. Furthermore, at peak usage times, pages download slowly, creating a frustrating gap in the viewing process. As artists use more advanced software, viewers sometimes must update viewing applications before they can access the artwork. Much of this can be blamed on greedy product developers who choose to be at odds with one another to build brand loyalty. It is the artists and other serious Web authors who are working to improve accessibility.

I have yet to view a Web-based work that moves me as viscerally as The Death of Sardanapalus, but this is a case of apples and oranges — and birth dates. To me, oil paint is deliciously real and comfortable; cyberspace is immaterial and strange. Future generations likely will find more excitement and solace inside a computer than in linseed oil. The more often viewers are exposed to Internet aesthetics, and the tighter the marriage of art and technology, the better we’ll learn to appreciate the genre as a unique and fine art with inconceivable possibilities.