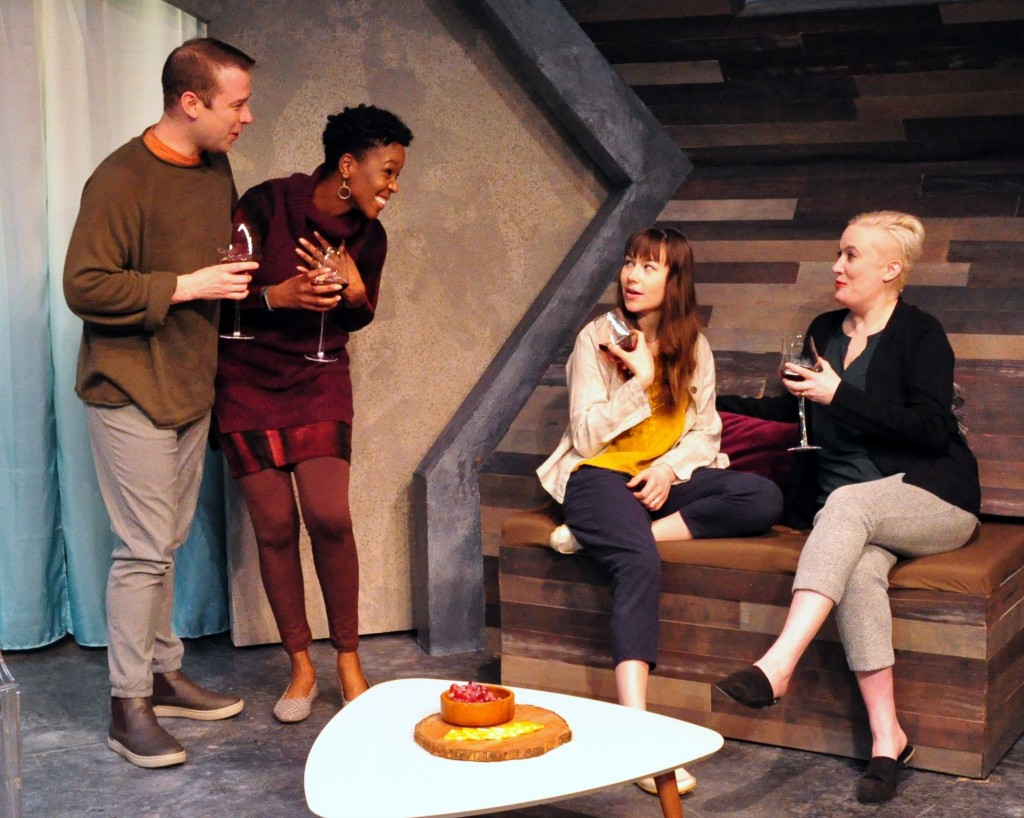 They say the mark of a good play is whether you’re still talking about it on the way home. I’m not sold on that conventional wisdom.

On my walk home from Babel, the Unicorn Theatre’s latest production, my partner and I became embroiled in a heated argument—not about the play’s ideas, but the quicksand logic of what we had just seen. At some point, confused and exasperated, he shouted, “Yes, but that’s what the mind control storks were for!”

There was a moment of silence in which I could see him mentally playing back what he’d just said. We stopped arguing. We shook hands and went to bed.

Playwright Jacqueline Goldfinger’s latest script, a National New Play Network rolling world premiere, details a grim future in which global warming and attendant water and food shortages have led the government to institute DNA-based population controls. Those with genetic “aberrations” are marked as untouchables, forced to live in underground villages and work as day laborers for the genetically privileged. Pregnant mothers are forced to pre-screen their babies for these aberrations and are encouraged—in some cases, manipulated—into aborting them if they do.

In this world, Renee (Amy O’Connor) and Dani (Katie Gilchrist) seem like the perfect couple. They’re genetically “pure”; they’re government certified. But when Renee becomes pregnant, her in-utero test shows abnormalities. The couple isn’t sure how to proceed or how much to reveal to their (also expecting) friends Jamie (Jake Walker) and Ann (Yetunde Felix-Ukwu)

Gilchrist delivers a standout performance as Dani, an idealist tensioned like a guitar string. As she struggles to hold the frayed edges of her life together she becomes abusive, impulsive, controlling—but always with a smile. Felix-Ukwu makes a similarly strong impression delivering an anxiety-steeped pep-talk to the mirror.

O’Connor has a more challenging task: making Renee’s rambling, at times repetitive monologues fresh and urgent. I’ve long admired O’Connor’s spontaneity as an actor, but she seems uncharacteristically rushed here. Part of the problem may be that Renee’s motives are often opaque. She sees a man-sized, sentient stork in her garden and offers him a joint instead of screaming (“You’re just a side effect of the pot,” Renee says, a line that only makes sense if you think pot is PCP). She placidly sings Bobby Darin’s “Beyond the Sea” to a deranged, blood-soaked woman who has just stabbed a doctor with a pen. 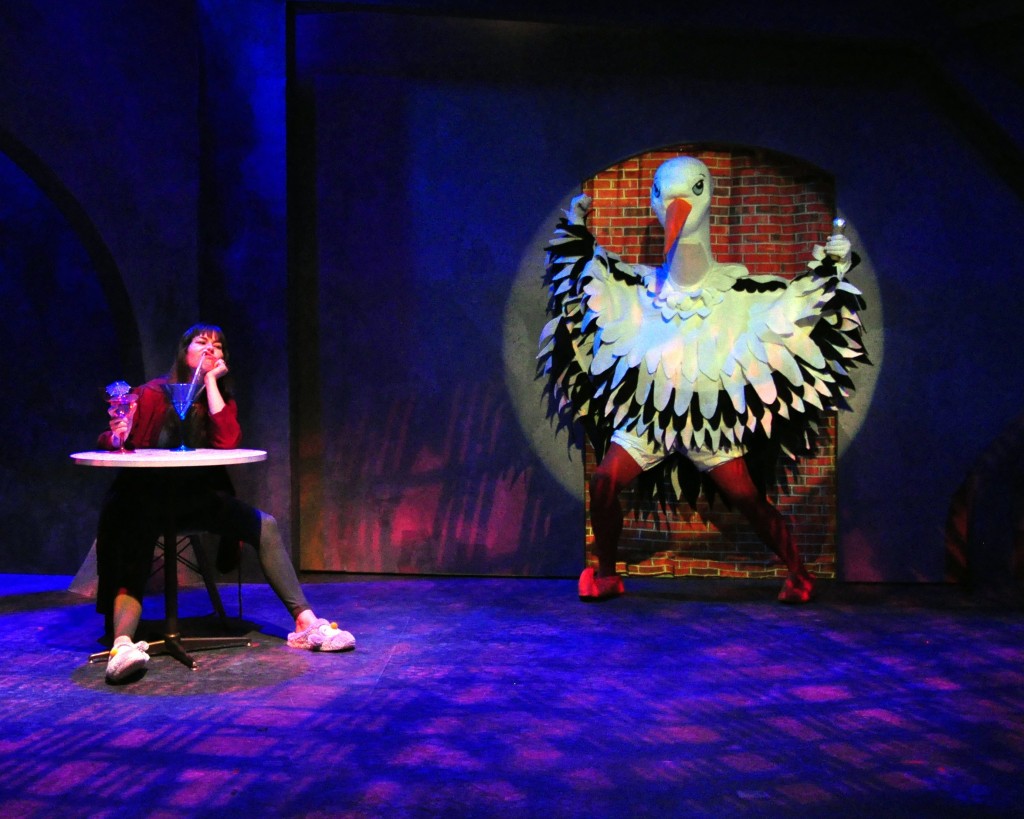 When the script does attempt to connect the dots, it does so clumsily. Any futuristic setting is going to require some world-building, but Goldfinger’s characters deliver exposition as if reading from a brochure (“There have only been two mass shootings since the vote!” “We are on track to have enough fertile soil, enough clean air, to last at least another 300 years!”).

Characters pose bald rhetorical questions about the plays’ Big Ideas; everyone winds up sounding like an OpEd columnist. “Are we willing to give all of it up for pallid uniformity?” Renee asks. “What are probabilities except guesses en masse?” queries Jamie.

Gretchen Halle’s costumes mostly comprise modern workwear, but her design for an enormous, mascot-style stork suit contributes to the show’s biggest laughs. Curl-toed orange elf shoes add a quirky edge to shaggy tiers of feathers and a mascot head with skeptical bedroom eyes. Walker makes a meal of the part, prancing around in the suit like a dressage horse and lecturing in an accent pinned somewhere between Woody Allen and “The Situation” from Jersey Shore. 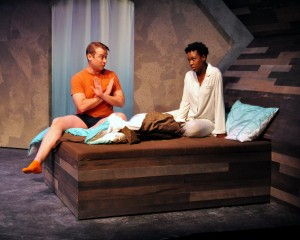 Director Ian R. Crawford mostly keeps the energy up and the actors on track, save a few odd choices. A hurried, late-for-work confrontation between Dani and Renee fizzles into relaxed chatter; multiple scenes between Ann and Jamie begin with them making their bed from scratch (it speeds the scene change, but it’s also conspicuously weird).

Still, for all the grave problems of this world, the stakes often seem imaginary. Characters comment on severe water shortages with mild detachment while sipping generous glasses of red wine (it can take 50 gallons of water to produce a 4-ounce glass of wine, but hey, who’s counting?). Maybe that choice is meant as a critique of class stratification—how the poor have and will continue to bear the brunt of climate change while the rich prattle merrily on—but the script seems less interested in these questions than the well-tread perils of “playing God.”

In the program notes, dramaturg Hannah Taylor bills Babel as a dystopia. The best dystopian fiction works as a fun-house mirror, stretching our real anxieties into grotesque proportions in the service of telling ineluctable truths. But Babel’s premise—that our government might care so deeply about avoiding the consequences of climate change that they would gaslight women into having abortions—feels less like a dire inevitability and more like an after school special sponsored by Right to Life.

Currently, Missouri has one clinic allowed to administer abortions. Our governor Marches for Life and refuses to acknowledge climate change even when declaring a flood-based state of emergency. If Babel is a vision of our future, it’s not clear how we get there from here.

Through February 9 at the Unicorn Theatre, Levin Stage