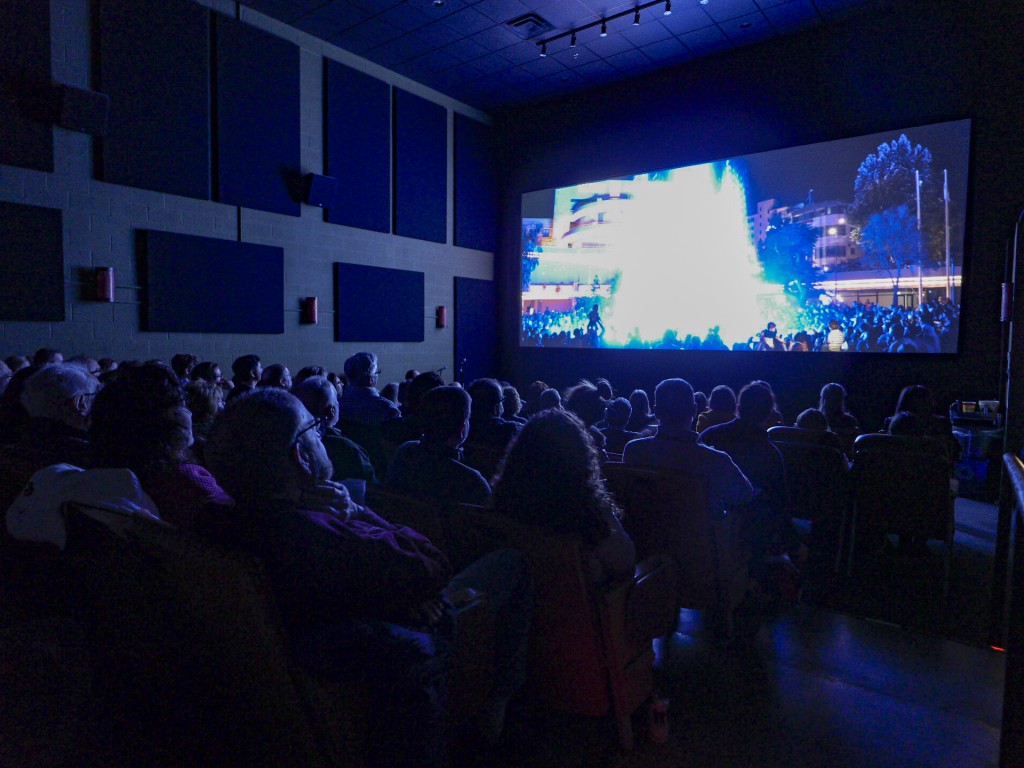 A screening of Mayor at Big Ragtag. // Photo by Jonathan Asher

For almost 20 years, Columbia, Missouri’s True/False Film Festival has steadily grown a reputation as a great place to see surprising and exciting nonfiction filmmaking. The beloved community festival has a tight-knit, communal “anything goes” air that can bring attendees in contact with recent Oscar winners and up-and-coming contenders, rubbing elbows with directors, writers, musicians and creative folks of many stripes.

The 2020 True/False was one of the last public events to happen before COVID-19 shut us all up in our homes. In attempting to mount the event safely for 2021, the organizers came up with some innovative new ideas. This year’s festival was moved from its usual home in March to the first weekend in May, and will take place both outside and online. True/False’s Teleported Fest, which provides goodies, activities and online film access to attendees watching from home, sold out quickly. There are still passes and individual film tickets available for its live outdoor version May 5-9 in Columbia’s Stephens Lake Park.

I spoke with True/False co-founder David Wilson about how this year’s festival took shape, and what attendees can expect to encounter.

True/False is one of the last things I remember doing last year before everything shut down. In the last couple of days at the fest, SXSW got canceled, and you were getting some last minute additions on the basis of that. After it all went down, what did those first few days after the festival look like?

David Wilson: It was so wild in the moment and wild to look back on. It feels like it was a particular screening, I think it was Thursday night. Usually there are Thursday night screenings at Ragtag with a bunch of industry presence, and everyone’s phones lit up during a screening, and everyone came out of the screening with the news that SXSW was canceled, and that’s kind of when it felt real for everyone. We’d been tracking things, and we’d put in safety precautions for that year’s fest, so it wasn’t not real. But like, at the beginning of last year’s fest I was doing the jokey, “Do we hug still? C’mon bring it in!” and by Sunday it was like, “Let’s do an elbow bump.”

How did that sudden change impact how the next year was going to look for you all?

There’s always a period after a fest when we’re recovering, and then we still sort of felt like we were paralyzed. How do we plan a year out? None of us know anything right now. We were getting daily releases from the CDC about whether we wear masks or not.

We sort of had a breakthrough around June of last year when we realized all we can do is imagine what it would look like if we did a fest tomorrow. Let’s start with that. It kind of gave us the ability to start making plans, like this could look like this, or this would look like this. We explored a lot. It wasn’t all immediately apparent. We knew we can’t be indoors, so if it’s not indoors where can it take place and how many people can come?

At some point we identified Stephens Lake Park here in Columbia, a 118-acre park which has rolling hills and a lake, and we wondered if we could fit multiple venues into this park. There’s a local music festival that takes place there every year, so we knew that was possible, and so we started building. Where we ended up was with the four venues scattered throughout the park, and coming up with a safe, masked, distanced fest that still contained the essence of True/False.

True/False relies strongly on community support. How did that help you in the pivot to outdoor venues and planning for this year?

We have this bedrock where we serve these communities. One is our local community, another is the international documentary community. We started thinking about how what we’re doing works for this audience, or how it works for this other audience, and what people might need from a festival right now.

I think where we’ve landed is that we fervently believe that there’s something special in the act of watching movies together. It’s a truly communal act. It makes the movies better and brings people together. That’s what we’ve been after, is can we do that in a way that’s also safe, and we think we can.

How did the pandemic impact film programming?

It’s more dramatic than I thought it would be. There’s still a fair number of films who applied. A lot of the films that applied had finished shooting before the pandemic, so their process didn’t look that different. Some of the films were shooting up to and through the early days of the pandemic, and we’re dealing with that. Even postproduction is harder, when you can’t sit in a room with an editor. Some films just decided to wait entirely. It’s a different landscape. Distributors aren’t sure what they’re doing either. They maybe bought a film out of Sundance and like all of us are trying to figure out how to put it out in the world.

Thankfully, Amir George and Angela Catalano are our programmers this year, and we had a great process in the programming room, and we looked at a lot of films and talked through a lot of films. I could not be more proud of this crop of films. I think it’s safe to say as a generalization about these filmmakers that for any variety of reasons, they’re used to kicking down doors that have been shut in front of them. This year tested those skills. It’s an ambitious year for these types of films and filmmakers, and I’m really proud of that.

So given that, what can attendees at this year’s festival expect in terms of venue and experience?

It’s truly an inversion of what we usually do. We usually do concerts late at night, movies during the day. Here this year we’re saying come in the afternoon Saturday and Sunday, see some bands and watch your movie at night. I think that’s a cool aspect of this year’s fest, is that you get to enjoy the music of True/False, which has been getting stronger and stronger each year with the help of our curatorial team, and they’ll get to show off a little more, albeit in a limited form because some bands aren’t ready to tour yet.

For bands more than filmmakers, we might be a little too soon. Regional acts seem okay, but a thing I hadn’t considered is the fact that a lot of bands haven’t been able to practice together in the last year, so never mind if they’re ready, or they’ve all got their second shots, they still need a couple of months for getting back to being as good as they were. But the bands we’ve been able to find are really exceptional.

What elements of the festival are you most excited for attendees to experience?

I love showing movies outdoors. It’s something I always wished we could do with True/False normally, but the weather never cooperated. I’m excited for the chance to watch these outside under the stars with audiences. I love the energy of a normal True/False, where for four days I’m just going non-stop, but selfishly the idea I can sit on a blanket in a park with some friends and talk about movies for the afternoon, and then go get some food and watch a movie at night, that sounds lovely. We’re all in the process of re-entering society right now, and the fest gets to be part of that.

Do you think there are any elements of planning or execution of this year’s festival that might stick around for future years?

We’re certainly not ruling out the Teleported Fest, which springs from a treasure chest delivered to your doorstep with interactive elements and online dance parties. I could see doing that in the future to make the fest more available for folks who aren’t traveling. A large part of it is the in-person experience we all share, and we don’t want to distract from that, but I’m truly excited about Teleported and what that can do.

The Teleported Fest was kind of my brainchild and something I’ve shepherded along. It really goes against the grain of strategies for online festivals. I’m in favor of expanding audiences, but what gets lost is actual engagement with the films. We have all these stats about people watching five minutes of a film and then turning it off, or distracted viewing. So, how do we make an at-home viewing experience that gets even close to the feeling of going into a theater to watch a movie?

We’ve done a lot of manipulations both obvious and subtle. We looked at everything from theme park design to online dating communities for inspiration. Audiences will get roughly one new film a night with other films as bonus add-ons. We’re also building dance parties and karaoke nights and vaudeville shows to build extra engagement for attendees.

What films are you most excited for?

I’m excited about all of the films, but the big headliner film is Summer of Soul, Questlove’s directorial debut, which is a doc about a music festival that took place in Harlem in 1969. This will be the first public (in-person) screening of that film, before it’s released all around the nation. I’m proud we get to be the first public screening of it.

Every year we also do the True Vision Award, which honors a director’s work in nonfiction filmmaking. This year we’re awarding Rosine Mbakam, whose documentary Chez Jolie Coiffure was a True/False pick in 2019. Her new film, Delphine’s Prayers, is just a radiant film. It’s in a woman’s bedroom, and she’s one of the most interesting presences I’ve seen in a film in a long time. It’s a collaboration between what’s happening in front of the camera and behind the camera.

Homeroom by Pete Nicks is the third film of his we’ve shown, and it kind of completes a trilogy. Pete and some of the crew and some of the subjects will be there as well. I think this will be the movie’s first live screenings, and definitely the first live screenings with the subject and filmmakers in attendance. It’s the best film that contains pandemic and protests in 2020 that’s not directly about it. It’s about high school students responding to everything going on around the mas they finish school in 2020.