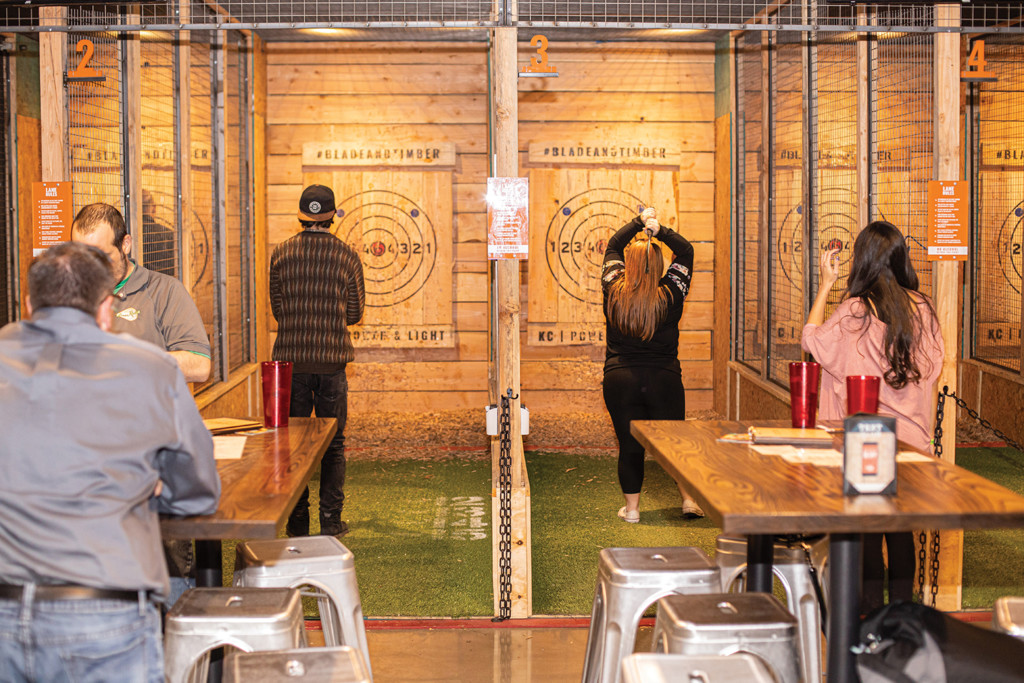 You can throw axes in the Power & Light District now because irony is dead and we have killed it.

In August, Blade & Timber, Kansas City’s first “axe-throwing experience,” moved from its ancestral home in the West Bottoms to a glossy storefront at 13th and Baltimore. The concept hasn’t changed. For $20 per person, you can spend an hour and a half chucking hand axes into your own private pinewood bullseye. But now, you can do it in high style—and with beer.

In some ways, recreational axe-throwing feels like a perfect fit for Kansas City, a town where seemingly every middle-class Millennial owns a buffalo-plaid flannel and a brown-glass jar of “beard oil” they’re not sure how to use. Blade & Timber’s rapid expansion seems to support that. Co-founders Matt Baysinger and Ryan Henrich opened the first Blade & Timber in 2017 and have already grown to six locations, including one in Leawood.

But what’s driving the Paul Bunyan aesthetic? I’ve long been fascinated by this question, which I’ve thus far chalked up to a combination of pride in our Midwestern farm roots and insecurity about our learned helplessness in the digital age. We all want to believe we could walk into the woods tomorrow and successfully Live Off The Land. None of us want to admit we’d shit ourselves to death from giardia long before we had a chance to skin a chipmunk with an improvised stone knife.

So I set off to the new Blade & Timber to trace our collective lumberjack fantasy to its logical and inevitable homebase: the Power & Light District, that hallowed, unspoiled wilderness where 40-year-olds go to buy 20-year-olds Jell-O shots.

Do not make my mistake and navigate to the wrong location. Know before you go: Blade & Timber is four blocks away from a “craft drinkery” named Oak & Steel and two blocks from the old Cleaver & Cork (now Guy Fieri’s Dive & Taco Joint).

I thought about all that Wood & Metal while I booked a lane and scanned a very long legal waiver granting Blade & Timber plenary indulgences for my death or dismemberment. For all the waivers, the experience itself seemed pretty foolproof. My party of six was assigned a private lane with a friendly coach named Bryson who guided each of us through a few practice throws before cutting us loose. I looked around. All the lanes seemed to have their own Brysons. The one in the lane next to us had a tidy man bun and the beard of a Civil War general. Like all the coaches, he was wearing a hunter-orange Blade & Timber tee.

Our alcohol consumption was strictly regimented, too. Each member of my party was granted a neon-green wristband with three little ax symbols, denoting the maximum number of beers we were allowed to order. When I ordered my first round, a bartender used a hole punch to mark it off my wristband. (I feel the need to point out here that all of my punches were hanging chads, which the Supreme Court has roundly decided do not count.)

That structure’s essential to keeping patrons safe—and making Blade & Timber an appropriate destination for “corporate groups” and “team building,” as the website promotes. But it also started to feel a little weird. Almost exactly five minutes before our time was up, our checks hit the table unbidden. Exactly an hour and a half after we arrived, we were (politely! gently!) ushered out. Other lumberjacks were waiting for their turn.

I ought to be the target audience for this sport. I love darts, beer, and sanctioned property destruction. I passed a pleasant evening recently shooting a friend’s .22 pistol at the side of an old grain bin by the light of a literal trashcan fire. But leaving Blade & Timber, I couldn’t shake the feeling that I had just done something truly strange, like buying the hotel bathrobe or drinking at an Applebee’s.

Part of it may be that the brisk time slots and automatic check delivery make Blade & Timber less of a destination than a waystation. After 90 minutes, I wasn’t quite ready to say goodbye to my friends, but none of us really wanted to linger in the empty bar area, which was lit like a stadium. Plus, we were out of punches. 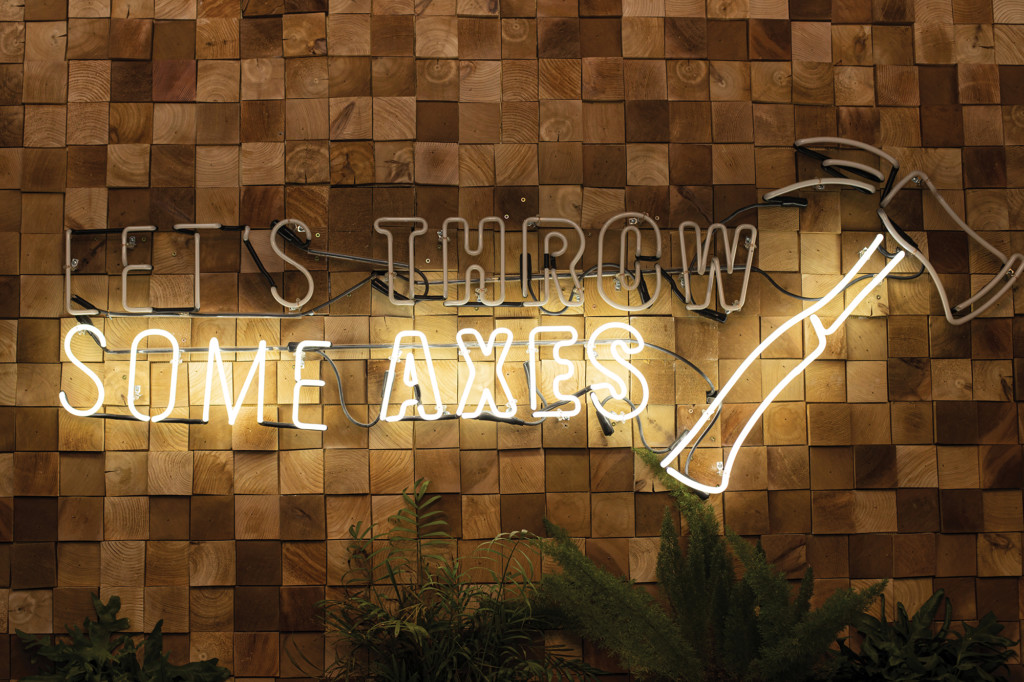 But it might also be that the experience is suffused with odd little luxuries. You can take a sassy group photo beneath a neon sign that reads “LET’S THROW SOME AXES” (on my visit, only the bottom half of the sign was lit, so it just read “SOME AXES”). You can order lacy-edged sweet potato waffle fries ($4) from a compact food menu developed by James Beard Award nominee Taylor Petrehn and inspired by “meals shared around the campfire.” You can buy branded orange beer koozies and Blade & Timber t-shirts. If you want, you can buy the chewed-up target from your lane and mount it in your living room like a trophy buck.

There’s this book called Hatchet that just about everyone who went to public school in the ‘90s had to read in fifth grade. In it, a 13-year-old boy learns to survive in the wilderness with nothing but his hatchet. The book is catnip to preteens—who wouldn’t want to peace out of school and wait out puberty alone in a cave? Who doesn’t long to prove that parents and teachers and authorities are just window-dressing, that all we need is a hatchet and an iron will to make it on our own?

Blade & Timber offers something similarly appealing to adults: an excuse to cosplay rugged individualism, to spend an hour and a half convincing ourselves we could “hack it” like our imaginary ancestors. Crucially, we get to go home after. Fantasy doesn’t work if we get too uncomfortable.

I don’t want to sound sour about the nostalgia industrial complex. There’s nothing wrong with hurling Middle-Age war weapons down a lane of AstroTurf in a slickly branded urban playground in the same way that there was nothing wrong with Henry David Thoreau outsourcing his laundry so he could spend more time thinking Deep Thoughts in the Deep Woods. It’s just incongruous. It’s not the posture of grit that feels off, it’s the anesthetizing glamor. It’s not the beard—it’s the beard oil.

There’s another option, of course: You can decide not to take it all so fucking seriously. You can spend $20, hurl an axe down the lane like a fastball, and have a pretty good time trying to get back to a place you never were.