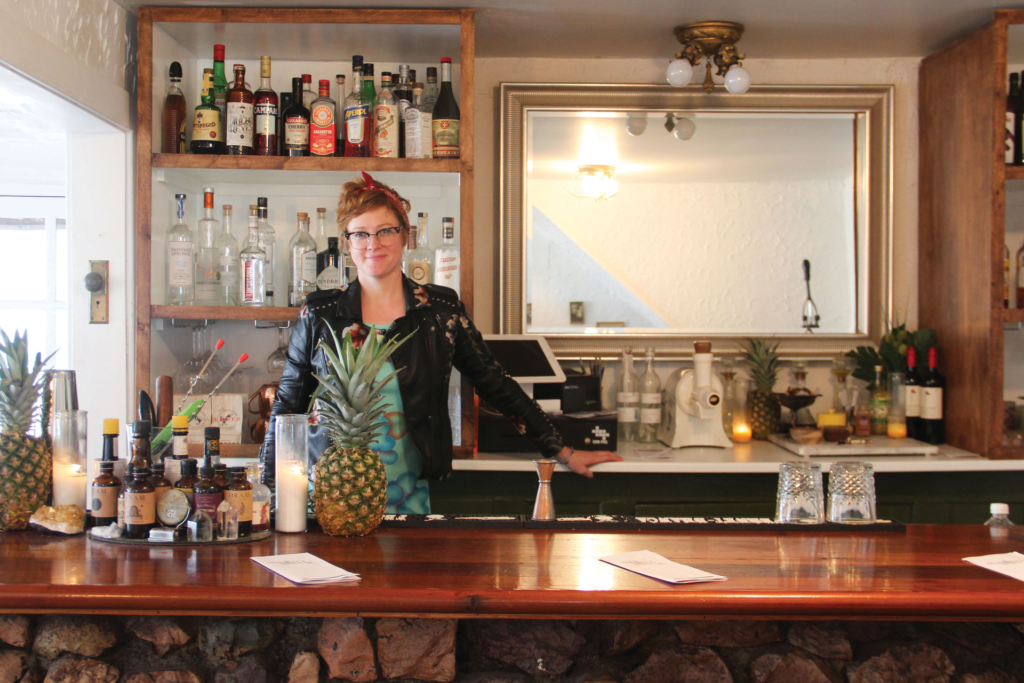 Six months ago, Kate Frick started the liquidation process on the Myers Hotel Bar, the Tonganoxie smart-cocktails destination she opened in 2015. Frick’s landlord had sold the property, and a new lease wasn’t forthcoming. She sold off the bar’s equipment, furniture, decorations — even the plants. Closing time.

Then something unexpected happened. The building’s new owner, Doug Dowell, of Overland Park, met some of Frick’s former clientele. He heard about all the financial and emotional work she’d put into building the Myers. And, one month after the bar closed its doors, Dowell had a change of heart. Not only did he want Frick to reopen her bar — he wanted to sell the entire 139-year-old building to her.

“He called and said, ‘I want you to buy the building, and I’m going to make you an offer you can’t refuse,’” Frick recalls. “[He said] ‘You guys have been the stewards. I don’t want to ruin what has already been established.’”

Frick was stunned. “It was hard to wrap my head around that kind of kindness from a stranger,” she says.

They negotiated a personal sale, and today Frick and her partner and girlfriend, Stephanie Marchesi, own the old hotel and the nearly two-acre lot on which it sits.

The Myers Hotel has accommodated many enterprises in his long history. The building was once owned by Magdalena Bury, the founder of Tonganoxie. Mollie Myers ran her namesake hotel there from 1894-1931. Since then, it’s also been a diner, a cafe, a salon, and even, it is widely believed, the inspiration for the 1955 William Inge play Bus Stop (later adapted into a film starring Marilyn Monroe). The original neon sign for the Myers Hotel (weathered and minus the neon tubes) still hangs, almost impossibly, out front.

Various architectural additions stacked on top of the original structure speak to how many hands have worked here over the years. The edges are rough, but, to use a real-estate cliche, the place has excellent bones. That makes it an ideal canvass for somebody like Frick. An architect by training, Frick made a career swerve into mixology and bar management — her credits include opening Lawrence’s John Brown Underground — and is committed to renovating all 3,000-odd square feet of the building (as opposed to just the 500 square feet in which the bar has been operating).

Frick and Marchesi say they have no intention to ever run an actual hotel, but the building is already much more alive than it was just a few months ago. A coffee bar was built out of a bathroom, and light fare (banana bread made by Deb Crum of Crum’s Heirlooms and chocolate croissants) is available during the coffee shop’s Tuesday-through-Saturday morning hours. Hot breakfast is available on Saturdays. A cabin behind the main building was renovated into an Instagram-worthy Airbnb space, complete with cowhide rugs and a quaint, vintage-themed kitchen. A bar garden has been erected. A large ballroom is now furnished with vintage pieces, a game table, and a large, comfortable wrap-around couch beside an antique fireplace.

“It feels almost like a friend’s house,” she says. “It definitely changed the way people behave.”

The cocktail program has been the big draw of the Myers Hotel Bar these past few years, and nothing’s changed on that front. The bar continues to serve drinks on Thursday, Friday, and Saturday nights. Frick changes the drinks menu at least 12 times a year, which keeps her motivated. When I visited, on a cold, late spring day, she served me her Picnic cocktail: gin, Barenjager and egg white, along with Herbsaint and fennel, garnished with bee pollen. It smelled like her garden out back: fresh earth and budding plants. (Lest anyone think she takes herself too seriously, the menu also includes drinks like the VFW: “vodka, fresca and whatever.”)

While the bar and its $8-$12 cocktails has a more obvious appeal to urbanites — and it’s true, Frick says, that about half of the Myers’ customers come from Lawrence, Kansas City, and other surrounding towns — Frick seems to be gradually earning the business of a substantial number of customers here in Tongie, population 6,000.

“I disappoint people on a daily basis that I don’t have Bud Light or Moscato,” Frick says. “There was definitely an element of education. But it is really fun, once you gain that trust — they will come in again and try anything.”