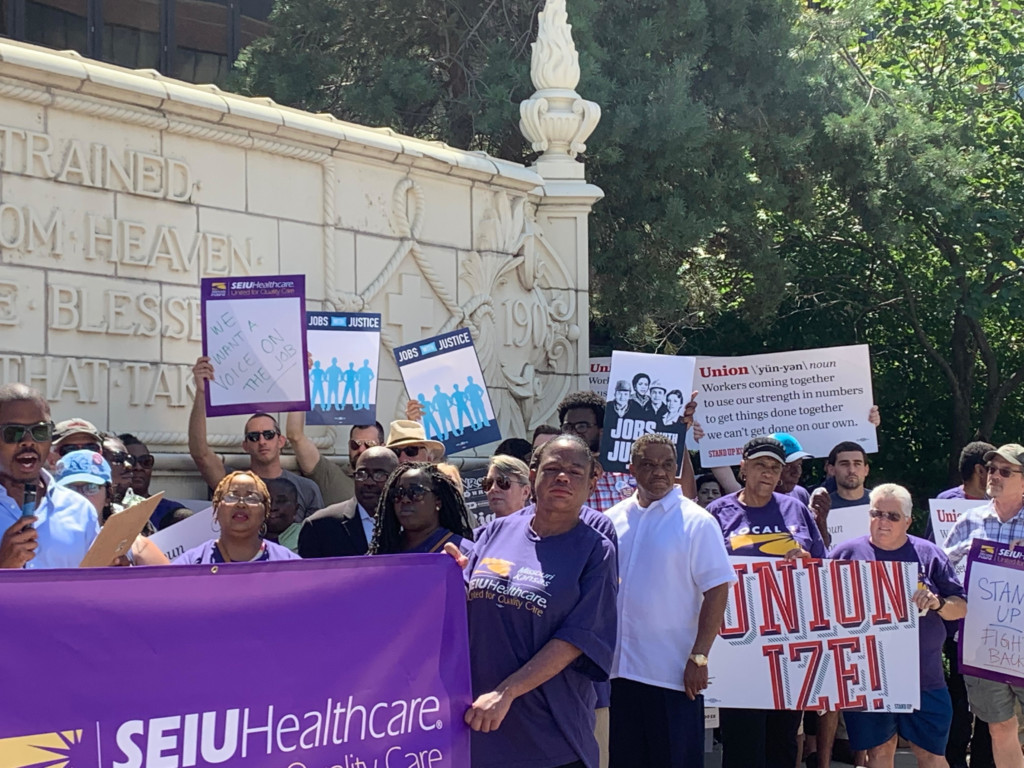 Following a rally out in front of Truman Medical Center’s Hospital Hill Campus on August 13, the hospital’s lab and tech workers have filed an unfair labor practice charge against TMC with the National Labor Relations Board (NLRB).

The filing comes after TMC’s CEO Charlie Shields failed to respond to a letter a delegation of workers delivered to his office the day of the rally. Employees also alleged an escalation of anti-union tactics from the hospital’s management team since the rally.

The week after the rally, specimen receiver Sheltta Ross, who’s worked at TMC for 13 years, was called into a one-on-one meeting with her manager and disciplined. Ross previously spoke to The Pitch about the experiences that prompted her desire for a union, and she was a vocal participant of last month’s rally.

“It was very intimidating and made me fear I’ll lose my job,” Ross says. “I’ve never done anything less than meet or exceed expectations in my performance reviews in my 13 years here, but once I start advocating for a union so we can improve our jobs and patient care, I am targeted? I feel this is direct retaliation.”

More than 200 of Ross’s co-workers have joined the effort to unionize and secure representation from SEIU Healthcare—a union that already represents 350 other TMC employees.

SEIU’s state director Lenny Jones points out particular frustration with the fact that the increased intimidation tactics are being used by a taxpayer-supported hospital. TMC receives $36.2 million in annual subsidies from Jackson County taxpayers.

“The behavior on display at Truman is unacceptable. As a union, we’re prepared to use all resources available to us to hold management accountable and ensure workers can win their union free from retaliation,” Jones says. “The fact that Truman is waging their anti-union campaign on the dime of taxpayers who we know overwhelmingly support a worker’s right to organize is shameful.”

In an email to the Kansas City Business Journal, TMC denied the charges filed by its employees: “TMC works well with all unions on site. We do not stand in the way of unions. We DO believe that workers should be able to vote on whether they want a union, and fully believe in the process allowing for a secret ballot vote, ensuring our employees’ choices will remain private.”

Since the unfair labor charge was filed, employees hand-delivered over 150 petitions to Shields last Thursday calling for an end to retaliation and intimidation tactics. They’ve also requested a meeting to discuss a fair and open process to win union representation.

The NLRB began its investigation this week, and a spokeswoman for SEIU and Truman’s lab and tech workers says that they are hopeful a meeting with Shields will be scheduled soon.

“We cannot allow management to continue to violate our rights as we organize for a voice in decision making and a seat at the table,” says Emiliegh Myers, a TMC patient care tech. “We are going to continue to support each other and will not let this illegal behavior deter our efforts. Our futures depend on our success.”