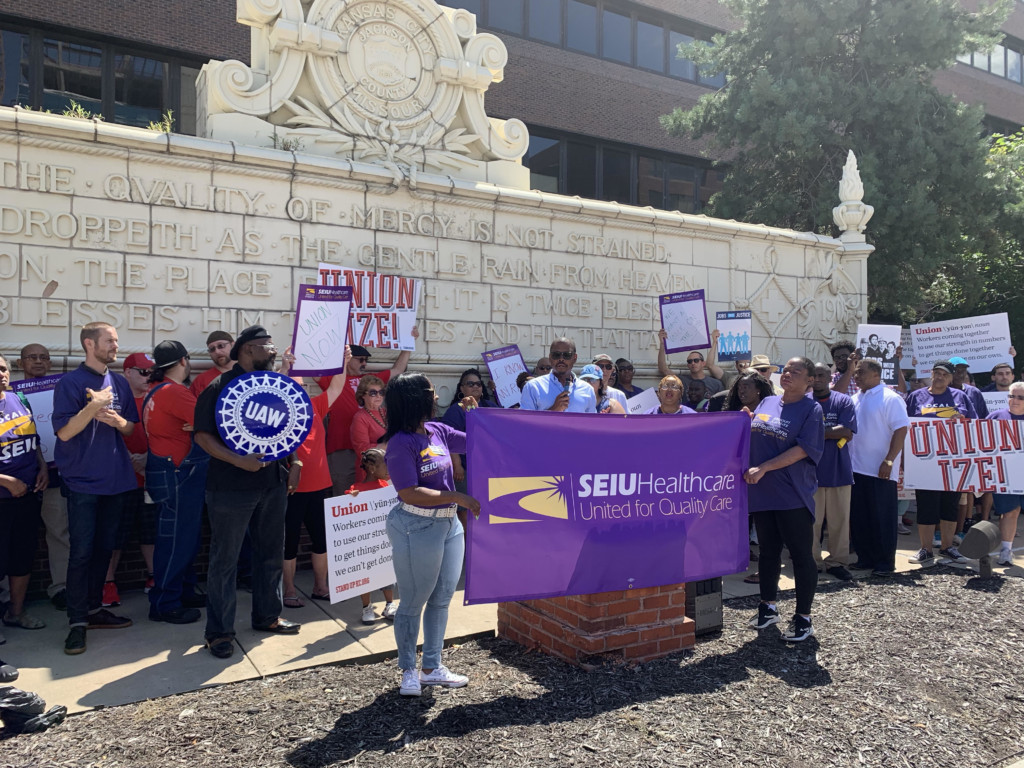 Jonathan Meador has been at his job as a medical lab scientist at Truman Medical Center for a little over a year now. In that time, he’d never been summoned to a meeting with upper management. That is, until Meador started talking to fellow lab and tech workers at the hospital about unionizing and asking about their interest in signing a union card.

“I was called into—not my boss’s office or even my boss’s boss’s office—the VP of operations at Truman brought me in,” Meador says. “It was a very curt and abrupt meeting where they said: ‘You’re harassing employees, you’re interrupting their work, and it has to stop.’”

Meador requested specific examples of how he was harassing employees. He says the VP told him, “You know what you’re doing, it has to stop. If it doesn’t, we’ll escalate this.”

On Tuesday afternoon, Meador and about 75 other hospital employees held a rally just outside Truman Medical Center’s main campus at 23rd Street and Holmes Street in Kansas City. A chorus rose from the sidewalks: “What do we want? A union! When do we want it? Now!”

Meador says lab employees aren’t given an opportunity to provide input on laboratory policies implemented by management. He says if employees were allowed to voice their opinions, their work would be more effective. “As workers, we feel like we have that ground-level view, and we know what’s going on and how to best get things done.”

Sheltta Ross, a specimen receiver who’s worked at Truman’s Hospital Hill campus for almost 14 years, shares many of Meador’s views. She says she’s been required to train several employees, which falls outside of the typical duties of someone in her position.

“It takes a lot of time and effort to train people,” Ross says. “We can’t stop doing what we’re doing and train someone. The staffing is so short that it’s just virtually impossible to do our job and make sure someone’s being accurately trained.”

In a hospital, of course, these issues ripple out far beyond staff morale. Meador recalls a leukemia diagnosis that was missed for several months because the people reading the patient’s blood had not been properly trained.

Ross says she’s asked management for additional compensation for the extra hours she puts in to train other workers but has never gotten a response—something she feels a union would be able to accomplish.

Earlier this year, Ross found out other hospital workers in departments like environmental services (EVS) were already represented by the union SEIU Healthcare Missouri, and she was quick to join efforts to bring SEIU’s union representation to the lab and tech departments. But when she put out a pamphlet in the employee lounge providing information about SEIU, she came in the next day to find it in the trash can.

Ross also says lab and tech employees have been called into meetings in the last few weeks where they have been told if they have a problem at work, they need to come directly to management and not discuss issues amongst their co-workers. In her years at Truman, she recalls no such meetings; she’s certain they’re a direct response to unionization efforts.

Another employee, Emiliegh Myers, a patient care tech, has also observed changes in management that she characterizes as intimidation tactics. She says when she first started her job last November her managers were friendly. But since she started talking to other employees about unionizing, her boss no longer acknowledges her presence.

“[My boss] has also brought in an employee and just asked them straight up if they knew anything about union organizing, if they know anything about the petitions, and who’s doing it,” Myers says. “That person spoke to me afterwards and told me what was going on.”

Myers says she wants to organize a union because the pay is too low. When she moved from a smaller, southwest Missouri town to the Kansas City area, Myers expected higher pay to match the cost of living. That hasn’t been the case. Myers says she and many of her co-workers have to put in hours of overtime in addition to their 12-hour shifts to make ends meet. Myers also donates plasma for extra cash.

“We don’t have the type of management that you can just go sit down with and talk to [about a raise],” Myers says. “If I were to try, like, I’d fear for my job.”

Truman Medical Center has not returned The Pitch’s request for comment, but in a statement to the Star the hospital said its view is that it is being pressured into voluntarily recognizing the union based on the demands of one group. Management believes the choice to unionize should be put up to a vote of all affected employees. The hospital denied the use of any tactics to intimidate workers from organizing.

“If an employee believes that he or she is being harassed by a co-worker for any reason, we encourage that employee to come forward so that TMC can investigate the matter, regardless of the issue or reason underlying the dispute,” the statement read. “TMC’s policy is to treat all employees equally, regardless of their stance on any union issue, and we encourage anyone who believes this has not occurred to contact Human Resources so that the matter can be investigated.”

On Tuesday, the workers at the rally were joined by leaders from SEIU, as well as Missouri State Representative Judy Morgan (D-24) and Rodney Williams, president of the Kansas City Chapter of the NAACP.

In order to force a vote to unionize, organizers will have to collect union card signatures from at least 30 percent of employees affected. They can then submit that to the Labor Relations Board to call a majority election to certify the union.

After the rally, a delegation of workers delivered a letter to Truman’s CEO Charlie Shields requesting a fair and open process for union organizing.

“We hope that Charlie recognizes our union,” Meador says. “If not, then I hope that we have more community support built up from the rally, and we can further pressure the administration to at least quit the anti-union practices and allow us to organize.”