Tired of livestreams? Get yourself a one-of-a-kind Monzie Leo single 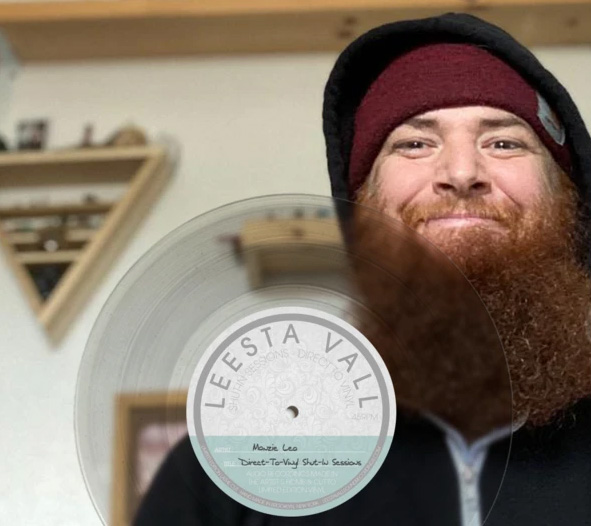 There have been so many livestreams the past month and a half, we’ve totally lost track. The same goes for Bandcamp specials, merch, and the like, so after a certain point, you’re likely wondering if there might be a novel way to support your favorite musicians. Happily, former Lawrencian Monzie Leo is offering up one hell of a novel concept. Partnering with Leesta Vall Sound Recordings, “a niche record label based in Brooklyn,” Monzie is making it possible for fans to get unique, one-off recordings of some of his songs, custom-cut by lathe to 7-inch vinyl singles.

“Before this 7-inch opportunity came along, I had already been releasing a song every Sunday/Monday on my Bandcamp,” Monzie explained by email from his new home in the Puget Sound area. “So, it felt very natural to just continue doing the same with the unique tracks for Leesta Vall Sound Recordings.”

You can choose from 11 songs from Monzie’s discography, including cuts recorded with Monzie Leo & the Big Sky, such as setlist favorites “Too High to Two Step” and “It’s a Long Walk (Sarcoxie).” Monzie says that people are mostly ordering his tune, “The Heart is a Pomegranate,” but figures that it’s such a timeless experience, why not put some older setlist staples up, as well?

“Friends and fans have wanted a vinyl release for years and it’s very surreal to be doing it from home in these strange times,” Monzie says. “The thing I like about it the most is that I can cultivate a shared experience with people I love. It’s like those cheesy birthday cards with the sound chips in them, but so much more elevated and personal.”

Personal is the right word, because each recording is unique to the record to which it is etched. If ten people ask for something like “Backfoot” (our personal favorite), then Monzie’s recording it ten times on his phone, something which seems a little surprising, they say.

“It’s a serious privilege to have a recording studio in your pocket!” Monzie continues. “I’d never used it until recently. I’ve recorded plenty of times, but never really turned any knobs.”

For folks that don’t collect vinyl, there’s also Monzie’s new chapbook, De Literae Elementis (Letters From the Elements), which Monzie sees as a bit of a return to where he started.

“I honestly started out as a poet (can you tell?) and turned to music at some point,” Monzie wraps up. “The book is a chapbook I’d been looking to get published for 5 years or so! It’s broken up into five sections. It expands on my personal experience with the elements that bind us all together and hopes to translate well to its reader.”

You can order your choice of Monzie Leo cuts from the Leesta Vail site. Monzie Leo and Leesta Vail have extended the chance to order recordings until May 13, despite what the website might say.