They serve food at the midtown Home Depot now. You will want to read the menu carefully. 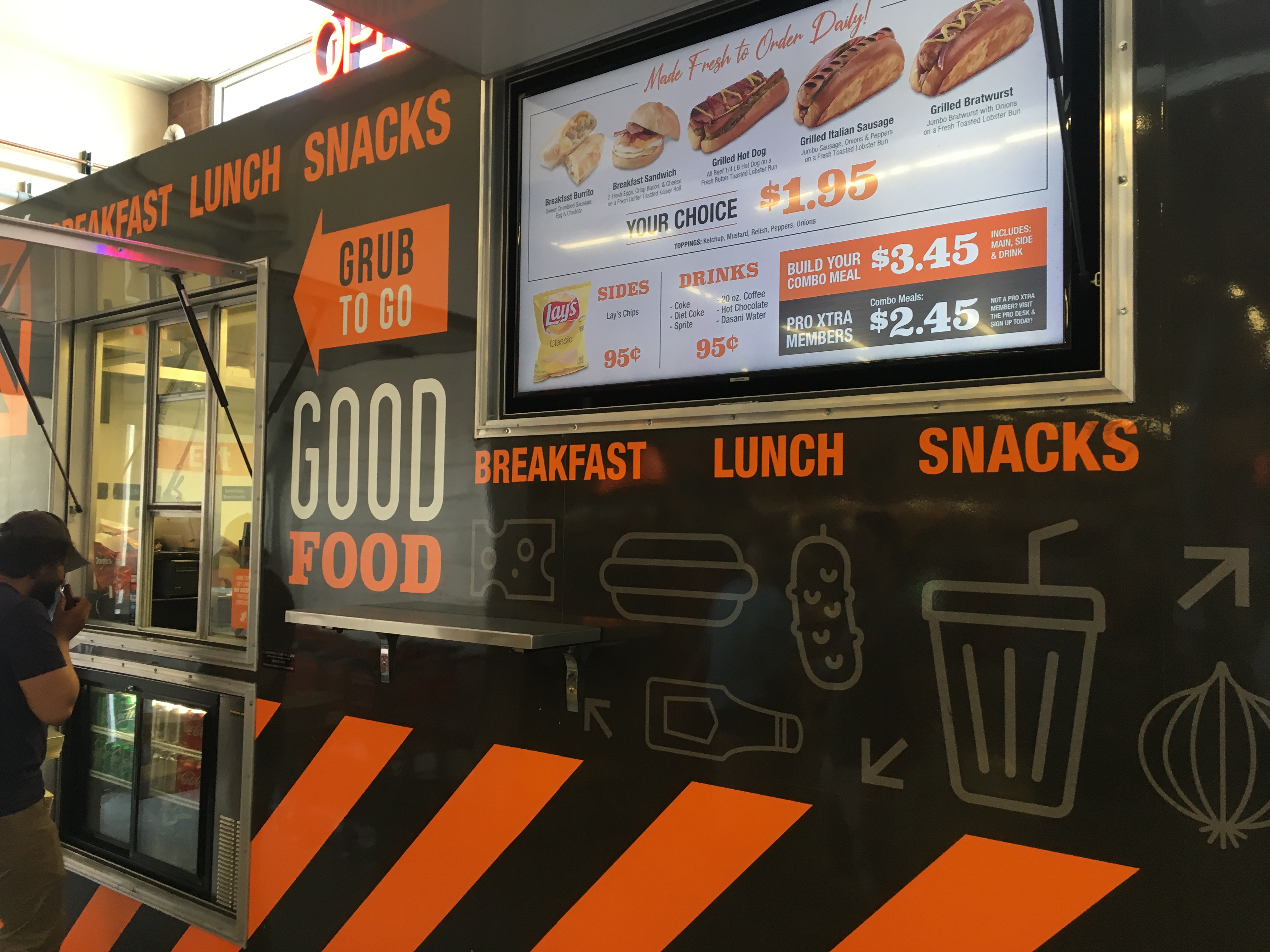 Everything is a restaurant now and none of us are safe.

I felt fine when it was just Ikea—the Swedish meatballs and toddler-sized cups of vanilla ice cream felt like a prize for reaching the end of the particle-board maze. Then gas stations started adding full kitchens and filling growlers with 600 IBU IPAs. Then the grocery stores—Whole Foods with its craft beers and $1 oyster feasts, Hy-Vee with its contagion of Market Grilles. Now, even Barnes & Noble has gotten in on the fun, opening five “upscale casual American restaurants” as Barnes & Noble Kitchens.

Restaurants are growing at twice the rate of the overall population, and they won’t stop until they’ve wormed into every inch of commercial real estate. I come home from work every day fearful that a restaurant has opened in my cramped Midtown kitchen. I have nightmares about it sometimes. It serves nothing but Hamm’s and jalapeno-stuffed olives and is called “Sad Martini.” The waitress is a real bitch.

So I was unsurprised to discover that the Home Depot on Linwood—the place I go for tile grout and industrial-strength solvents and spare jigsaw blades—has a restaurant now, too. I scoped out the website, which has a short blurb about the store’s new Pro Café. It promised to “satisfy [my] taste buds” with “freshly baked New England lobster rolls.”

I searched my heart. Did I really want to eat a lobster roll in the parking lot of a national home improvement chain? (Yes.) Was this what journalism had become? (Yes.) What would Woodward and Bernstein do? (They’d deep throat the goddamned lobster roll.)

I struck out for the Home Depot with singular focus. I was on fire, like an unattended soldering iron. 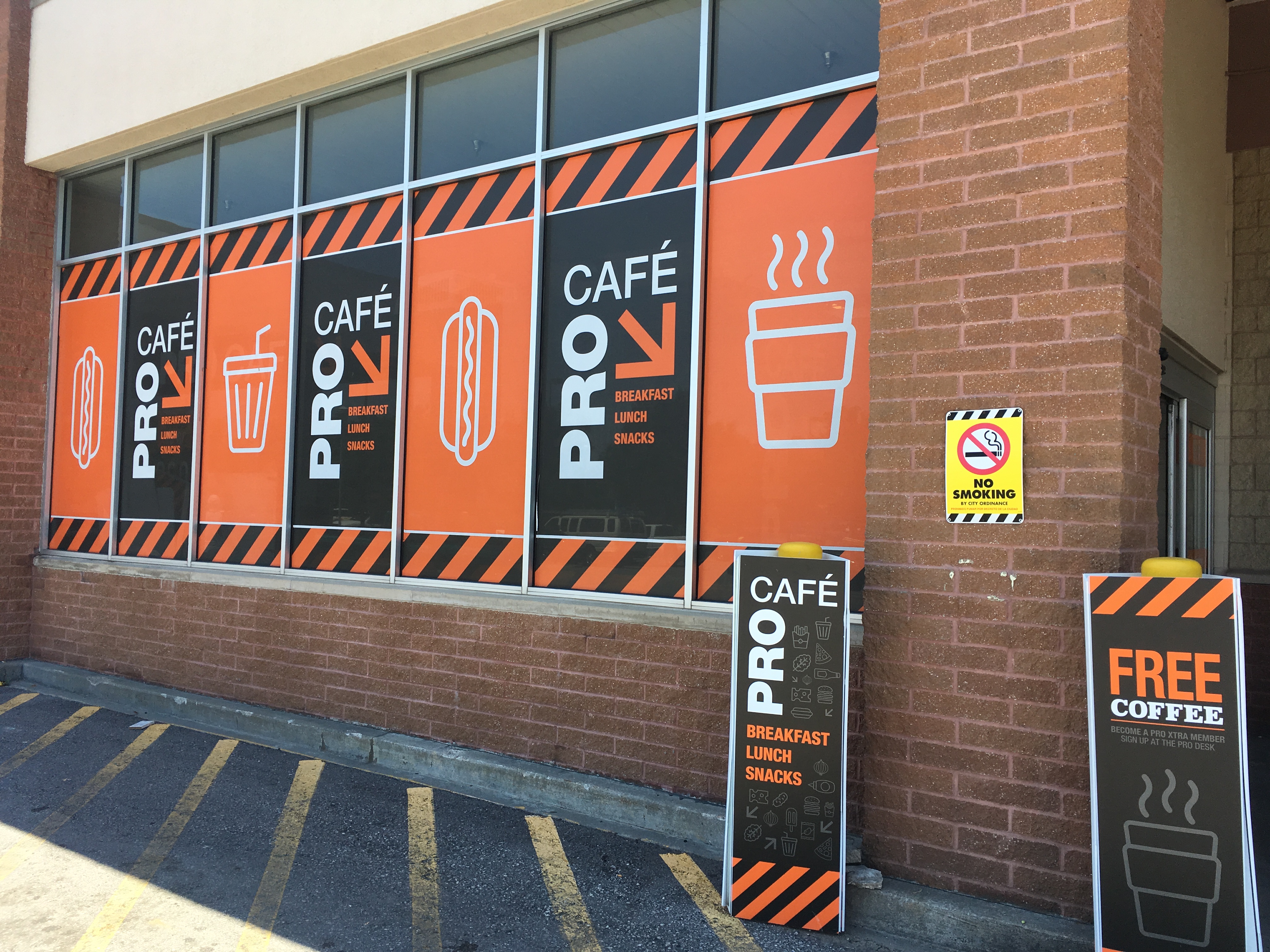 A sandwich board outside the store beckoned me in. FREE COFFEE, it read. Only when I was about six inches away did I see the fine print—dark gray letters on a black background—alerting me that the free coffee was only for “PRO XTRA” members.

The Pro Café is a gleaming black trailer parked in the easternmost entryway, the portal to what I will hereafter refer to as the East Wing. The East Wing is where you go for the Hard Shit: lumber, power tools, backhoes.

Of course this is where the Pros hang out, I thought to myself, as far as they can get from the casuals buying light bulbs and mailboxes. Mailboxes! True to form, the guy in front of me in line was wearing possum-stompin’ boots and a Day-Glo t-shirt. I gave him a somber nod so he’d know I was a Pro. Xtra.

The trailer was custom-detailed with stylized silhouettes of Swiss cheese and inspirational quotes like “GOOD FOOD” and “GRUB TO GO.”  An inset flat screen displayed photos of the menu items along with their prices. I scanned it frantically for the lobster roll. It wasn’t there. Where had I gone wrong? Then I read the description for the café’s hot dog and Italian sausage. Both purported to be served on “lobster buns.” Read: ordinary split-top buns. The buns that are sometimes used for lobster rolls.

I write about food semi-professionally and have never, ever heard of someone calling a lone bun a “New England lobster roll,” as though the bread were the essential component.  It’d be like calling Michael Jordan a golfer, or a single carrot a beef bourguignon.

I was feeling pretty victimized by synecdoche at this point, but it was too late to turn back. So I did what anyone in 2019 does when they’re embarrassed: double down and pretend they were in on it all along.

It was compact and built around the Five Bs: brats, burritos, breakfast sammies, hot dogs, and Italian sausages.

I know what you’re thinking: two of those aren’t Bs. But you’re forgetting the loBster roll.

All of the items were $1.95, so I ordered an Italian sausage and a breakfast burrito. The menu had really sold me on the burrito. The photo was of an enormous grilled wrap, cleaved into two and bronzed like a bodybuilder.

“Anything to drink?” asked the cashier.

I nodded knowingly. Of course. At the Pro Café, 20 ounce coffee is served in a 12 ounce cup. How do they do it? It is not for amateurs to know.

The Italian sausage had grill marks like tire treads and a few spindly strips of green pepper and onion. It was sweet and plump, if not especially flavorful. The best part was the frantic drizzle of mustard, which suggested a line cook familiar with the works of Jackson Pollock. It was kind of jazzy, that mustard, the sort of design you might see splashed over a 1980s windbreaker. 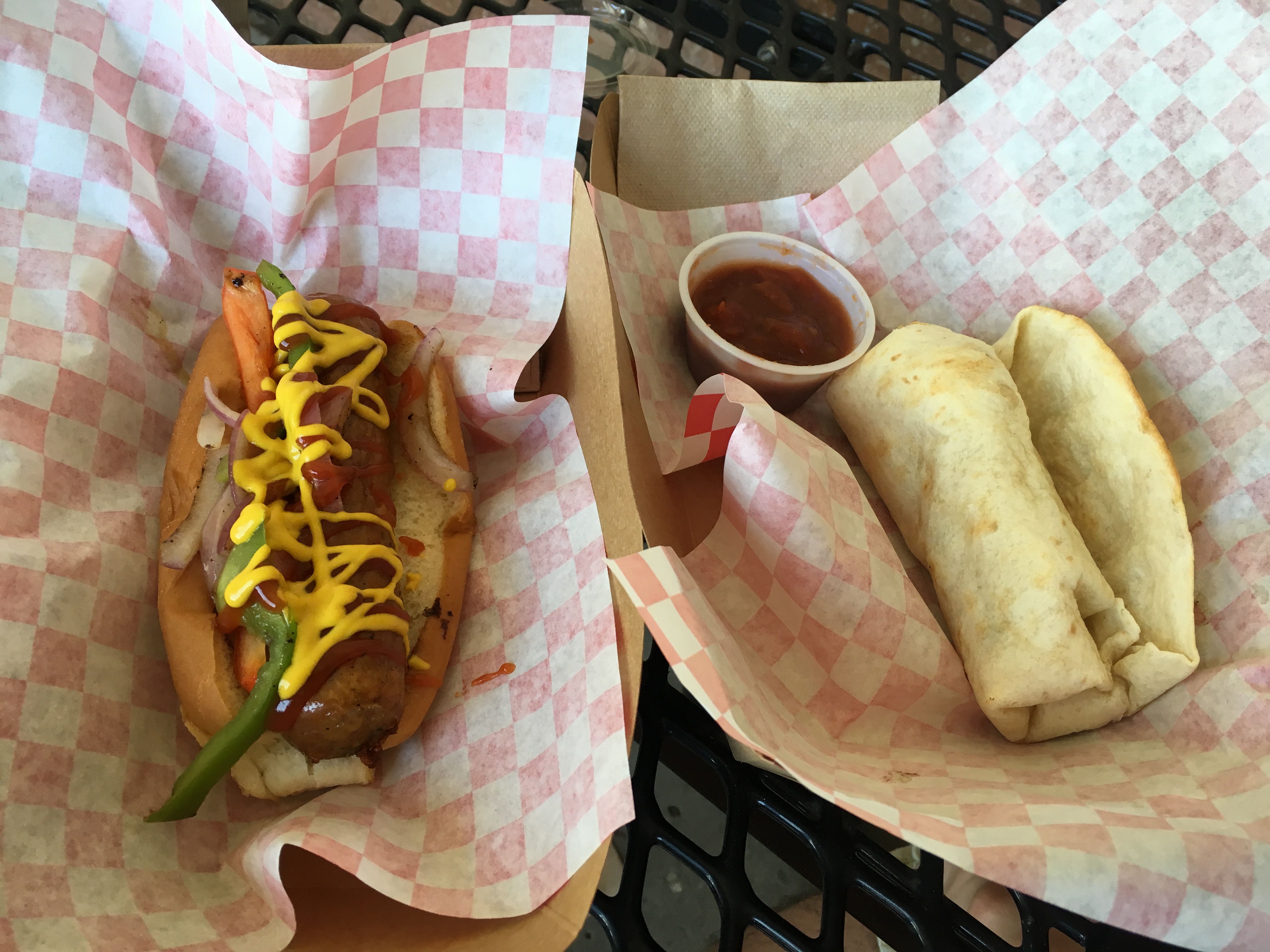 I turned to the breakfast burrito. It was smaller and paler and less attractive than its photo. I related to it instantly.

The burrito was honestly pretty good. The eggs were fluffy, the tortilla was well-stuffed, the “sweet crumbled sausage” was sweet and crumbled. It just needed a little more time on that grill. I color-matched my burrito at the Behr paint display. It was somewhere between “Translucent Silk” (MQ3-36) and “Creamy Mushroom” (PPU5-13).

The coffee…was fine. It wasn’t burnt, which is all I ask of a 95 cent beverage purchased in the atrium of a hardware store. I sipped it slowly while I wandered the East Wing, looking for someone who could cut my lumber. I needed to build some shelves, and I don’t own a table saw. I grew more ashamed as I watched associate after associate shrink away from my eager face. The message was clear. A real Pro—Xtra—would own a table saw.

A spokesperson for Home Depot tells me the Kansas City Pro Café was the first to launch, and that the corporation plans to bring the café to “a handful of additional markets to improve the concept.”

It might do better at a Home Depot without a Costco next door. The Pro Café is cheap, but you can cross the parking lot and get a quarter-pound dawg with a 20 ounce soda (served in a 20 ounce cup!) for $1.50. Admittedly, it doesn’t come on a lobster roll — and they make you do your own mustard.

But I’m unlikely to return to the Pro Café now that I’ve been exposed for a fraud. Journalism means facing up to hard truths: I’m not a pro, but I am [e]xtra.