The Way We Get By, Neil LaBute’s scolding of millennials, is just good enough 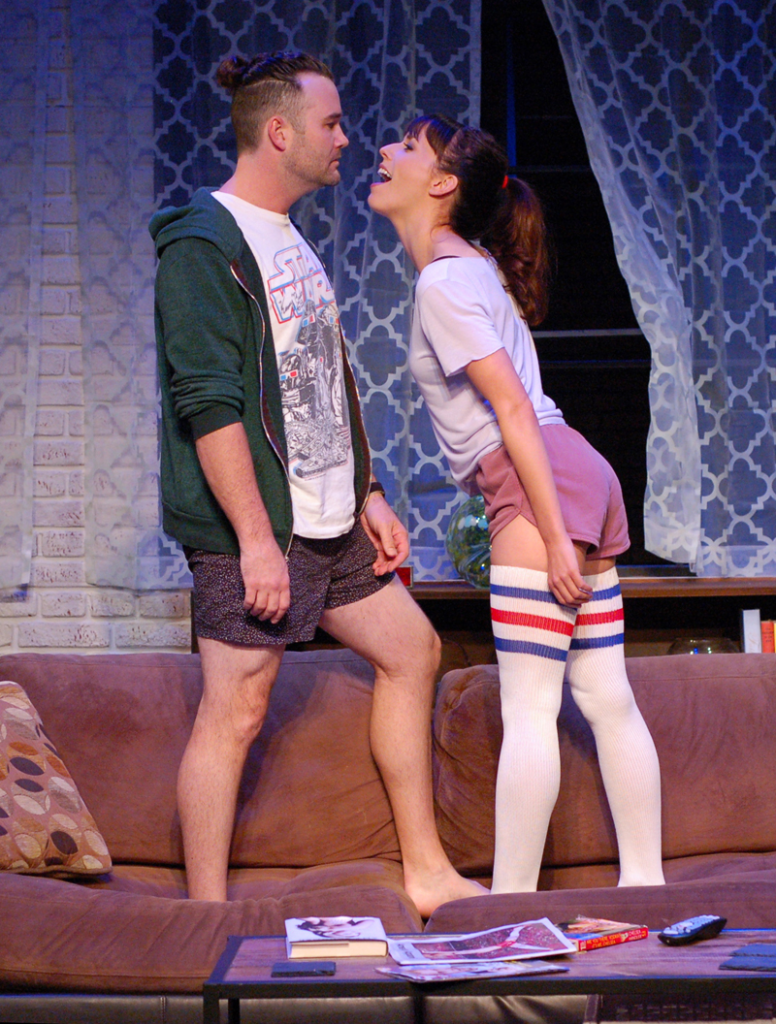 I can think of few literary mashups less likely than Fool for Love meets Girls. Yet that’s exactly the tone and tenor of The Way We Get By, playwright Neil LaBute’s zippy two-hander about millennial relationships and the courage sincerity requires.

The play’s focal point is LaBute’s hyper-realistic dialogue, and the Unicorn Theatre assigns two capable actors to make a meal of it. In a single marathon scene, Doug (Matthew Schmidli) and Beth (Molly Denninghoff) struggle with whether to extend an awkward one-night stand. But, as though playing an extended game of Taboo, they manage to talk around the issue without uttering the big, scary words that matter.

It’s a dialogue style that will frustrate some audience members but feel cringingly familiar to anyone who has dated (or dumped) a millennial. Every confession is steeped in fossil layers of irony, each line simultaneously a test and a joke. The cardinal sin in modern courtship, LaBute seems to suggest, is revealing your bare feelings and true intentions.

Beth and Doug do, of course, or else this would be a tedious 90 minutes. As the scene rolls on, we begin to map their desires by omission, to chart their defensive patterns or seemingly repetitive talking points (each resurgence revealing the naked hope for a different outcome).

Onstage, as in life, the constant equivocations and junk words (like, whatever, you know, thingy) occasionally grate. And a few too many pop-culture references make the script, which was published in 2015, feel prematurely stale. Over the course of the play, the characters trade jabs about SmartWater and Chelsea Handler and American Apparel’s creepy ex-CEO, Dov Charney. None of these jokes feels crucial to the plot or the characters; all could easily have been cut to freshen the play.

Director Darren Sextro keeps the box set from feeling static, blocking scenes in every corner of the apartment. And he has a firm feel for LaBute’s fractured dialogue, maintaining pace and stakes throughout the likes and the whatevers.

Denninghoff is dynamic as Beth, an impulsive feminist-in-training sick of her control-freak roommate, Kim. Beth constantly deflects with cool-girl sarcasm, and Denninghoff gives her a harder edge than the role demands. Still, her performance is peppered with scenes of raw vulnerability, as when she begs Doug to finally — explicitly — say what she hopes he’s thinking.

As Doug, Schmidli paints a convincing, even riveting portrait of a particular kind of man, one hypnotically drawn to the back of a leather sectional. Furniture-gripping aside, the actor is highly effective in the role. Although Doug talks in circuitous fits and starts, his conversation a drawing rendered in negative space, Schmidli’s body language and vocal tics show us the thought process (and needling insecurities) beneath.

Scenery and props designer Bret Engle provides an excellent dramaturgical study of the apartment of the archetypal anal-retentive college roommate. Pinterest-patterned curtains, inoffensive colorblock paintings, a color-coded chore sheet — these elements allow the invisible Kim to cast a looming shadow over the proceedings. The design shares much with Neil Patel’s original vision for Second Stage, but this isn’t a criticism of Engle so much as it is the recognition that certain banal, post-Target tastes have achieved ubiquity.

Alex Perry’s lights shift along with the couple’s moods. In one memorable scene, Perry turns Kim’s cheap fabric curtains into a scrim through which we can watch a scene on the fire escape outside. Sound designer David Kiehl effectively evokes a bustling New York borough, with sirens and car alarms that puncture awkward silences. And Ian R. Crawford’s costumes are simple but well-selected, from Doug’s retro Star Wars tee to Beth’s gym-sock thigh-highs.

As with many of LaBute’s plays, The Way We Get By hinges on a withheld secret. The reveal is convincing enough, motivating a late-play turn to more confessional lines (though still expressed through a veneer of disaffection). “It’s so corny to talk about that,” Beth says of love — but we know she wants Doug to confess it anyway, to steamroll through her objections and play the rom-com hero.

It’s perhaps fitting that the romantic-comedy routine yields a romantic-comedy ending tuned to the key of Zooey Deschanel. But the finale burst of quirk feels abrupt and unearned. Here, LaBute shows his age. He has familiarized himself with millennial tropes but remains ignorant of their expiration dates.

A bigger problem is that we learn more about the absent roommate than we do about the present characters. LaBute gives Beth and Doug a few fine strokes (she obsesses about a misplaced newspaper; he fusses about enunciating both t’s in duct tape), but we’re never quite sure what they do all day or what they find so intoxicating about one another. Instead, they feel like blank slates onto which we are meant to project our own ambitions and misgivings. It’s an interesting exercise — and keeps the focus on the meandering, indirect dialogue — but ultimately it prevents us from connecting with or investing in these characters fully.

Still, Schmidli and Denninghoff’s readings are layered enough to make music from the monotony. And the script feels curiously novel in its attention to people who are basically kind to and optimistic about one another.

The Way We Get By