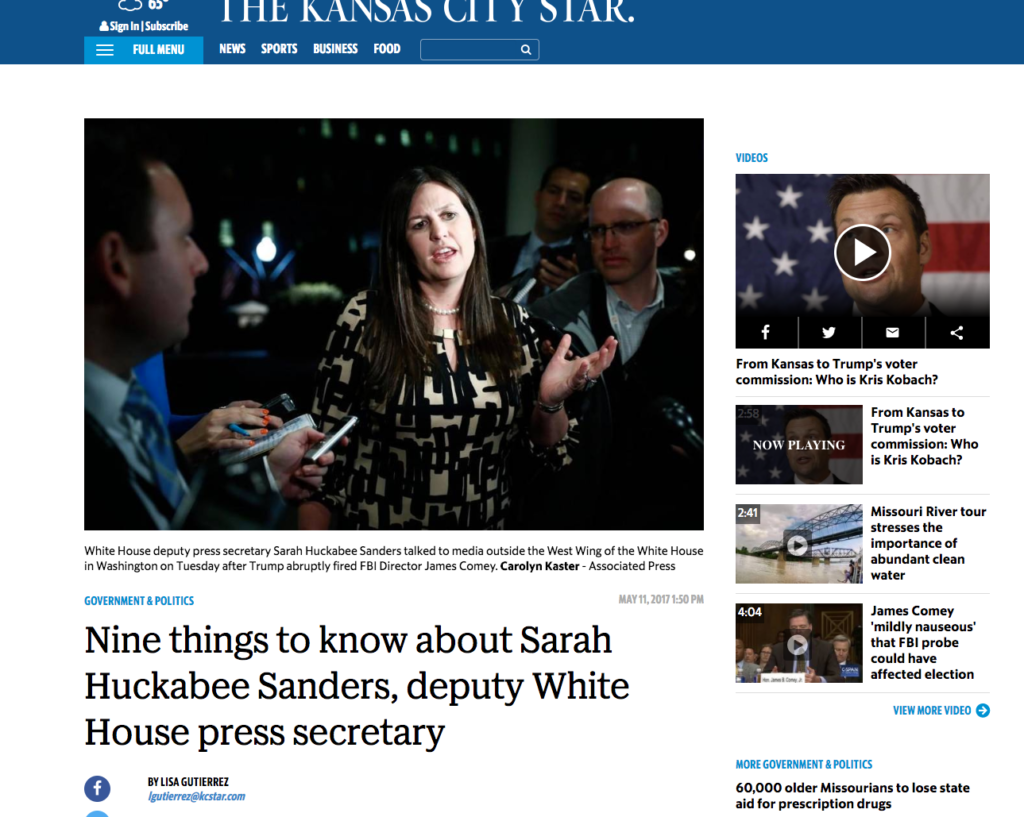 Lisa Gutierrez, The Kansas City Star‘s long-serving aggregator of celebrity wire filler (as well as its designated Bachelor fan), once again has wandered into the wrong section. Back in December, you’ll recall, she blew an air-kiss at incoming President Donald Trump’s nitwit children. It was gross. Today, she sprinkles a thick layer of who’s-that-sassy-lady glitter atop another fringe human. Her byline appears in the Government & Politics vertical on the paper’s website this afternoon, attached to a fan-zine-flavored roundup of “nine things to know about Sarah Huckabee Sanders.”

That’s Sarah Huckabee Sanders, Trump’s deputy press secretary, who this week has taken her flamboyantly untruthful Off Broadway act to the Great White House Way while her boss, noted outdoorsman Sean Spicer, is away. The main thing to know about Sanders is that she is a ridiculous liar whose father is a hateful sack of Arkansas pig shit.

An important thing to know about Gutierrez’s talking points is that they echo a list, also of nine items, published yesterday by the New York Daily News. 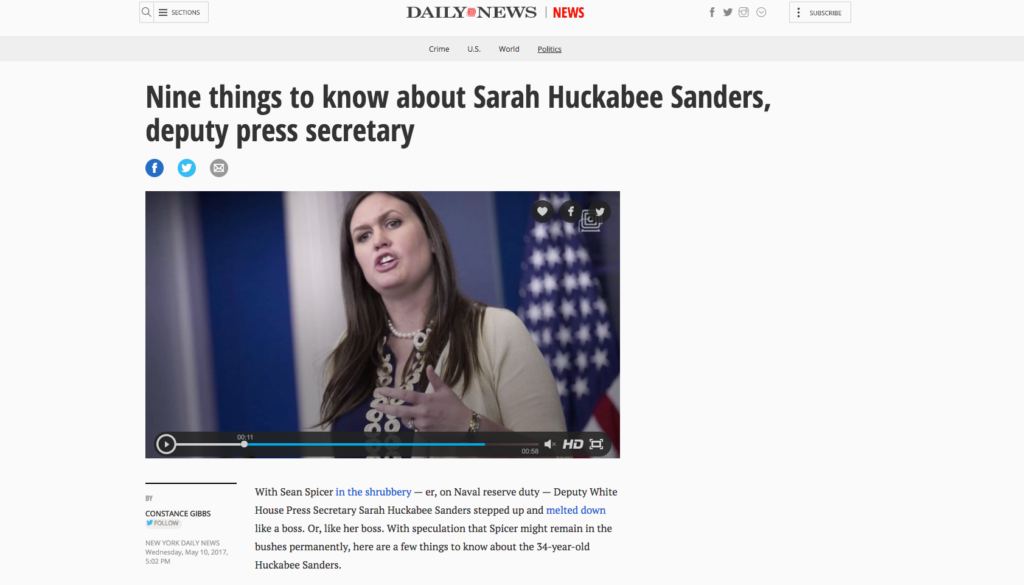 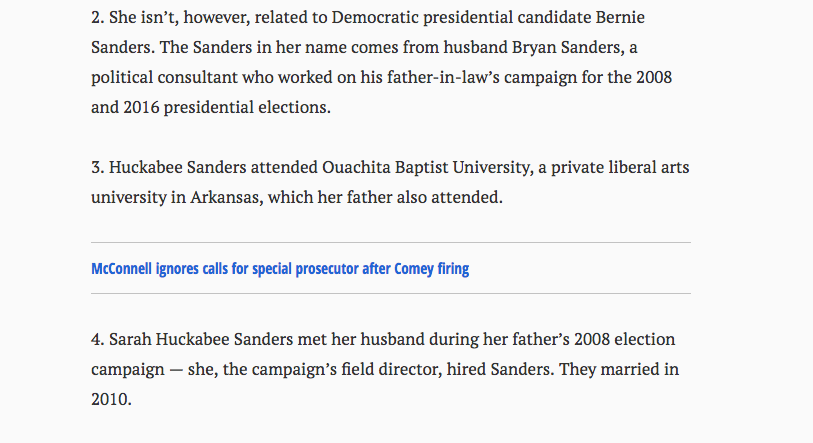 And here is Gutierrez:

The Star‘s version is different, yes, but primarily in tone: Gutierrez, for example, makes the married political hacks sound like a sweet couple. (Still, couldn’t someone have made it eight things to know? Or 10?)

In fact, the main thing to know about the Star‘s list is that Gutierrez has trained all of her sparkle power on making Sanders sound like a go-getting career woman, not a prevaricating shill. As a bonus, in the same bullet in which she sets out to establish Sanders’ wit, she makes Mike Huckabee sound like a lovable sitcom dad given to occasional slips of the tongue:

7. She’s got bite in her fight

On the one hand, she appears to have inherited a folksy, Southern-steeped wit from her father, who once said: “A Republican in my state feels about as out of place as Michael Vick at the Westminster Dog Show.”

She quoted President Lyndon Johnson in a particularly tense interview this week with George Stephanopoulos: “If the president walked across the Potomac, the media would be reporting that he could not swim.”

That’s among the former governor’s least racist tweets, actually, so, you know, good choice! As for Sanders’ co-opting of Johnson, Gutierrez leaves unsaid that what made that ABC interview tense was the fact that she was being called out on a lie. (Also, that interview was in March, not this week.)

If Sanders’ jokes don’t move you, her family will. Of the spokeswoman’s offspring, the Daily News simply observes: “6. Huckabee Sanders has three children: two girls and a boy.” The Star instead goes full Hallmark: 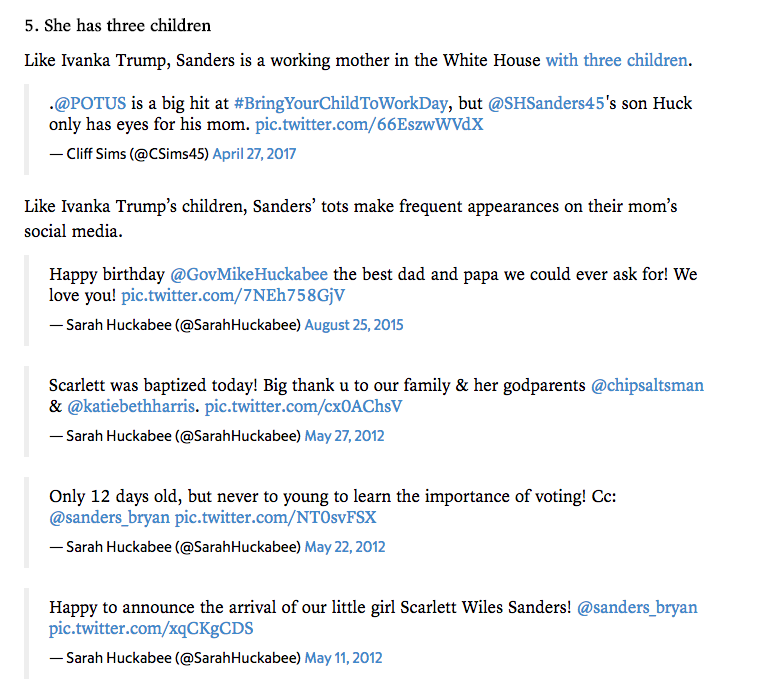 This allows Gutierrez to liken Sanders to first daughter Ivanka Trump: “a working mother.” Yup, Ivanka and Sanders are just like the rest of the women their administration obviously values — as it showed when the president revoked the Fair Pay and Safe Workplaces order in March.

This president’s constitutional-crisis merry-go-round broke a land-speed record this week. So, yeah, perfect time for the Star — whose presentation of national news has never been thinner or more oddly patched together — to shoplift a primer on Sanders and then Etsy it into a sisterly celebration. Who asked the daily for this normalization beat? And who’s going to make it stop?