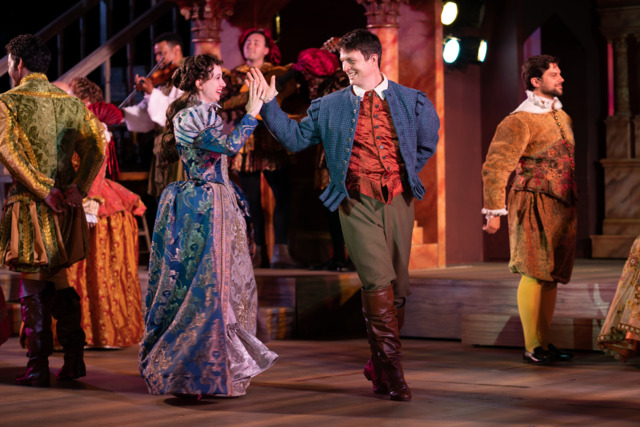 The long cold winter of our discontent has blossomed into glorious summer, and the Heart of America Shakespeare Festival, now in its 27th year, is a poetic proclamation of the season.

Even the show’s prologue has become a ritual, the opening pronouncements by its veteran Beggar for the Bard (Steve Loethen) a familiar singalong.

This year’s festival, though, has changed things up, staging a show that is not Shakespeare standard but is Shakespeare-like. And, yes, Shakespeare-lite. But Shakespeare in Love, expertly directed here by Sidonie Garrett, the festival’s artistic director, comes immersed in Shakespeare lore and Shakespeare lines, and blends the beauty of the writer’s words with romance, intrigue, and a plethora of humor.

The play was first a 1998 film by playwright Tom Stoppard (Rosencrantz and Guildenstern Are Dead and Arcadia, among many others) and screenwriter Marc Norman. It won seven Academy Awards, including Best Picture and Best Original Screenplay. It was adapted for the stage by Lee Hall (Billy Elliot), premiering in London’s West End in 2014. When it came across the pond in 2017, it debuted at the Oregon Shakespeare Festival. It’s perfectly suited to this festival venue.

Shakespeare in Love contains the complications of a Shakespeare work — double-crossings and mistaken identities and the labors of love lost. It’s a summer evening’s breeze to keep up, but an acquaintance with Romeo and Juliet will certainly help navigate the story’s plot and its meta-level meanderings.

About the plot: It’s 1590s London. William Shakespeare (it’s “Will Shakespeare” here) has a severe case of writer’s block but has promised a new play to two different theater owners: Henslowe (John Rensenhouse), at the Rose, and Burbage (Matt Rapport), at the Curtain. Neither man has a play in hand, and moneyman Fennyman (Bruce Roach), who holds some of Henslowe’s debts, is putting Henslowe’s feet quite literally to the fire. Rival playwright Marlowe (Cody Proctor) tries to help Will (Matt Schwader) come up with a script by feeding him a storyline — for Romeo and Ethel (the Pirate’s Daughter), a comedy.

Meanwhile … Viola de Lesseps (Hillary Clemens) wants to be an actor, but it’s unseemly for a woman, especially one of her aristocratic status, to appear on a stage. So she dresses like a man and heads to an audition — there’s no play yet, but an optimistic Henslowe is casting anyway.

That’s the setup, and just the start of the story’s convolutions. Suffice it to say, Will meets an undisguised Viola and starts wooing her like Romeo. (He gets help from wingman Marlowe, Cyrano de Bergerac-style.) But her father (Martin Buchanan) has promised her to Lord Wessex (Todd Lanker), and they are soon to wed. 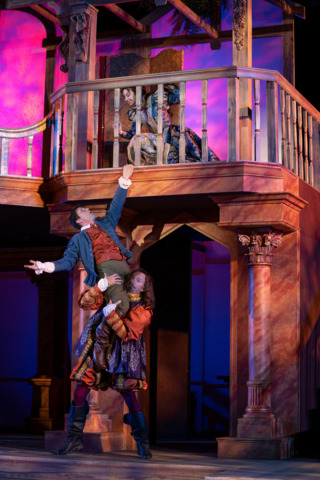 Schwader gets an assist from Proctor, at the balcony with Clemens.
Brian Paulette

As Shakespeare in Love unfolds, so does the plot of Will’s new play, which he composes as he lives its frenzied events. This cleverly constructed play within a play is true entertainment, if not pure Bard, and a stellar cast powers the smooth-running, fast-paced production (two and a half quick hours, including a 15-minute intermission).

Performances are outsized, very funny, and skillfully rendered. In addition to those actors previously mentioned are Jan Rogge as Queen Elizabeth, Cinnamon Schultz as Viola’s nurse, Matt Williamson as marquee idol Ned Alleyn, R.H. Wilhoit as young actor Sam, and Paolo Laskero as a juvenile John Webster. Justin Barron and Kristopher Stoker are also notable for their comedic portrayals. (Other supporting cast members are too numerous to mention.)

Garrett employs placard-wielding scene announcers, who clue us in to changes of place with style and verve. The richly rustic, two-level set (design by Gene Emerson Friedman), with its marbleized façade and Corinthian columns, serves as a general backdrop as well as Viola’s home (her canopied bed and balcony on the upper tier).

The magnificent eye-candy costumes (Mary Traylor), with their richly colorful fabrics, include wide Elizabethan collars (like rounded honeycomb shades about the neck) and even codpieces for the men. Will, looking like a modern-day copywriter, carries a man bag over his shoulder. Queen Elizabeth’s gowns are dazzling. Excellent performances aside, the wardrobe alone may be worth a trip to the fest.

The production’s lighting (Ward Everhart) bathes the set in a pale orange glow, in foggy blueness when characters cross a river and, later, in deep blood-red upon news of Marlowe’s demise. Music director and composer Greg Mackender renders Elizabethan notes to this show’s melodic soundtrack.

At the start, a small dog (Buster Rogge, as the Dog) would nearly steal the show if not for the abundance of talent on the stage and behind the scenes. Shakespeare in the Park comes around but once a year. Grab a blanket or a chair, relax in the calm and temperate air (tune out the sirens), and indulge in this top-notch, unadulterated Shakespearean pleasure.

It is summer, after all.