Restaurant review: Neither old-world stuffy nor showy avant garde, the Restaurant at 1900 hits all the right notes 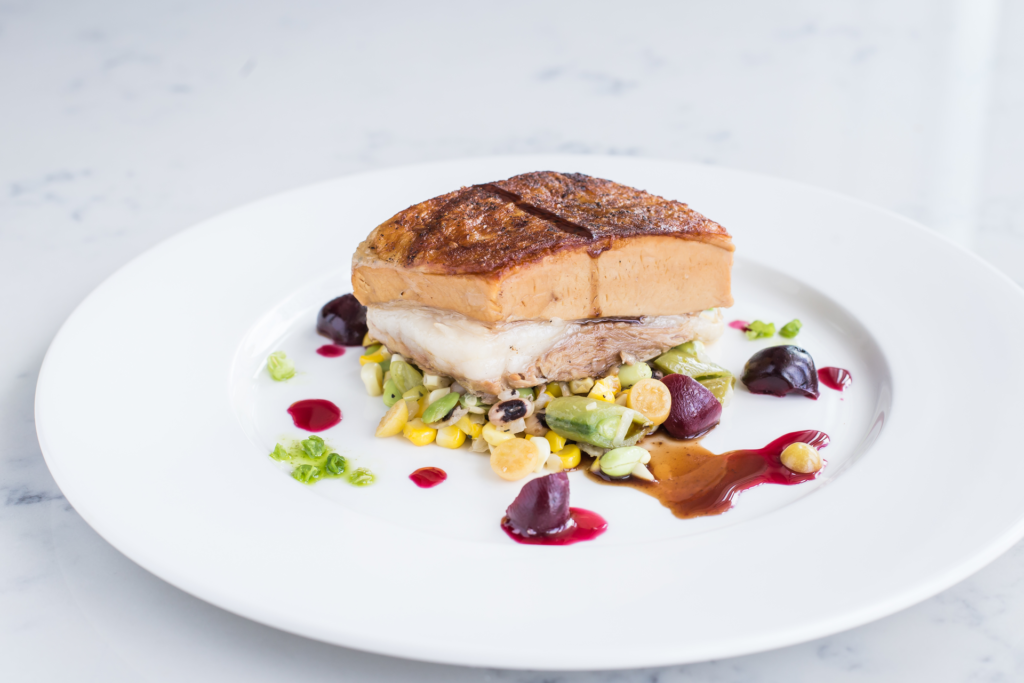 The dish was unassertive enough: a brown-skinned cube of veal breast, a shimmer of mahogany demi-glace, three lightpoles of white asparagus slashed with grill marks. A culinary version of “duck, duck, goose” played in my head: brown, brown, ghost. I pulled a morsel of veal away from the plate. The veal pulled me away with it.

A great meal — and The Restaurant at 1900 has a few of them — can wreak havoc with the senses and turn cynics into synesthetes. Chef Linda Duerr’s veal was velvet: supple as a pork belly, rich as duck confit. Her asparagus was ethereal, so tender I could scarcely map its edges; I forgot why anyone had ever called the vegetable “fibrous.” An errant wedge of rhubarb ignited in my mouth like a flashbulb. Then, a stray snippet of conversation dragged my stomach back to earth: “Would you prefer Majorca or Ibiza?”

I blinked, wondering if I was being offered a strange aperitif — no. It was a couple at the table next to me, debating their next weekend getaway. They had the bleached teeth and careless pattern-mixing of the urban elite. A silver-haired man bent over a two-top nearby, ribbing pompously about coworkers who eschewed jackets at the office.

I chanced a look at my tablemate. He was wearing cargo shorts and the expression of a French peasant in the summer of 1381. It was clear he’d been eavesdropping for some time.

“It’s OK,” I muttered. I skimmed a slice of asparagus through the demi-glace like a jet-ski and offered him my fork. “This isn’t for them.”

Of course, it is for them, in the most literal sense. The Restaurant at 1900 was designed in part to cater to wealthy patrons of the 1900 Building’s performing-arts spaces. The recently restored building in Mission Woods is an architectural platypus of tulip columns pasted onto limpid plate-glass windows. It’s going to draw some suits. 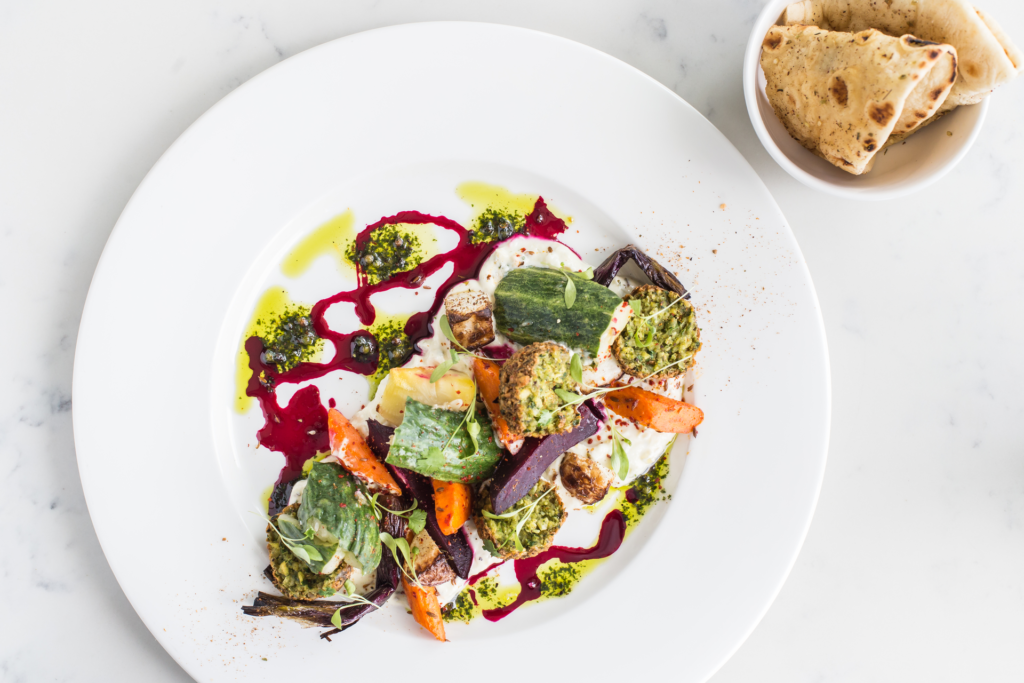 But Duerr’s approach to fine dining is neither old-world stuffy nor showy avant garde. The food here is elegant enough to appeal to the special-occasion crowd but playful enough to lure repeat visitors. A few dishes have the waggish air of culinary pranks. For example: the “lobster pop tart,” a contradiction of flaky crimped pastry crammed with rouge-tipped lobster meat and plated alongside a cherry-tomato salad and “whipped VSOP cream.” If there was cognac in the cream, it was undetectable. The unassuming tomatoes were the firecrackers.

Another wink: the Narragansett Bay lobster salad roll, a $30 sandwich with a side of chips. The presentation is almost obstinately humble; I can imagine ordering a near-identical sandwich from a dockside food cart. But the toasted brioche bun arrived piled high with knuckle-sized hunks of lobster, and a chubby slice of yellow heirloom tomato added interest to the plate. The chips needed seasoning, and I would have preferred a dash more lemon in the aioli to brighten things up (maybe even — gasp — an herb). But then, I’m neither a New Englander nor a purist. If you prefer your lobster plump and relatively unadorned, this is the roll for you.

Of all the upscale restaurants that have opened in the past couple of years, The Restaurant at 1900 seems closest to marrying genuine hospitality with a sense of humor. There’s no dress code, no white table cloths, no back waiters anxiously skating crumbers across your table. Instead, service is suffuse with small, graceful touches. A wooden tray of savory shortbreads (courtesy of pastry chef Elizabeth Paradise) soars out of the kitchen before each meal, complementing Duerr’s cooking like the previews for a film. Those shortbreads are a feat of engineering as much as flavor. Both the Kalamata olive and the rosemary-thyme were delicate and spindly, feathering on my tongue like cotton candy.

The ambience, too, is elegant but unpretentious. Sure, there’s white marble tables and Lester Goldman paintings, but also lots of natural light, dusk-blue leather, and a glass-cased collection of novelty salt-and-pepper shakers. The vibe feels right for an address that once belonged to homey fried-chicken outpost The Green Parrot Inn.

Beverage director Doug Frost has nodded to that history with the “Green Parrot,” a moss-colored cocktail blending rum, Aperol, blue curaçao and passion fruit. The drink I tried was round and complex with a tiki-style smoothness. It was also garnished with half of a community garden — a bouquet of flower blossoms, a shrubbery of mint — adding a heady fragrance to each sip. The Crane Shandy was simpler but no less thoughtful. Cappelletti highlighted the bitter notes in Crane’s Tea Weiss, while a dollop of raspberry-rosé sorbet softened the beer’s sharp edges. (I was less excited by the Spring in E Major, an aquavit and pisco-based drink that tasted stiff and out-of-season.)

Another graceful touch: teetotalers get to feel special here, too. Besides bottles of Mexican Coke and Sprite, the restaurant serves seasonal agua frescas (watermelon and pink peppercorn on a recent visit), a fresh ginger soda, and a housemade passion fruit fizz. Both the agua fresca and fizz were served with all the artistic flourishes of a high-margin cocktail.

Even the wine list is thoughtfully arranged. Reds and whites aren’t separated by grape but are instead ordered from “softest & lightest to full-bodied.” Frost offers small and large sizes of each wine-by-the-glass, which are called “tastes” and “pours,” respectively. The “taste” is much more than that, and the perfect size for lunch if you’ve got shit to do later.

And lunch is a lower-cost path to the 1900 experience. It’s also the only way to sample the lamb and chanterelle mushroom burger, which is one of Duerr’s standout dishes. A snowmelt of goat cheese and a tangle of tart beet relish were the only condiments needed; the lamb was tender and flavorful with a salty-sweet crust. This may be the first time I’ve ordered a $16 burger without griping about the price tag.

The “Lunch Special at 1900” is similarly worth the modest expense. For $14, you get a cup of soup, a small side salad, and the half-sandwich of the day. On a recent visit, I sampled a crisp piece of fried halibut on a white hoagie, tramped up with a curry remoulade and a tomato slice the size of the bun and the shade of a mortified fire engine.

But at any price point, you’d be hard-pressed to find a dud on Duerr’s menu. My objections on any given night were almost comically minute. A dish of fire-roasted tomato orzotto with steamed littleneck clams and crispy pork belly needed more parsley — parsley! — to add tension to the rich flavors. I had a similarly superficial gripe about a clever starter of cotechino sausage and heart of palm in a smoked tomato vinaigrette. The gigante beans were crumblier than they were creamy, but the flavors were bright and bold, each element balanced like an equation.

The only disappointment was the wild king salmon and panzanella salad, which was uncharacteristically dull. Duerr’s panzanella swaps the usual tomatoes for beets, and the marigold vinaigrette was too subtle to account for the absent acid. Still, the salmon — an ivory king on the day I ordered it — was oily and succulent.

Portions at 1900 are Goldilocks-right, leaving welcome room for Paradise’s desserts. The Cookie Plate at 1900 contained four dubloon-sized cookies warm from the oven (on a recent visit: chocolate tahini, coconut, sugar, and peanut butter). The peanut butter cookie was the obvious front-runner. It was chewy but crisp-edged, with a sin-dark peanut aroma so lush and fragrant that I expected to see a cartoon scent trail from the kitchen. The coconut macaroon was livened by a dusting of lime zest, and the chocolate tahini was satisfyingly rich and nutty. Only the sugar was a miscue — well-structured but bland. 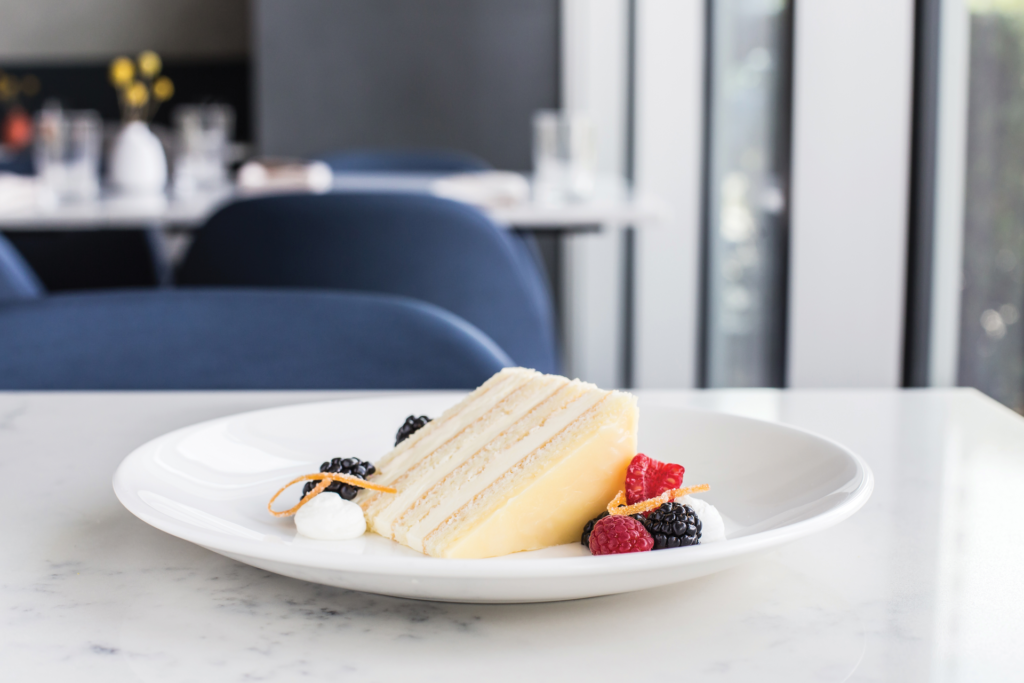 If you like lemon, the lemon chiffon layer cake is compulsory. I met Paradise once, at a crowded Pitch event, and I can never meet her again. I fear she already knows too much. She knows that I don’t want a mere flirtation with lemon. She knows that I want to be drenched to my elbows in sun-gorged citrus, brightness forking across my tongue like lightning.

This is not to say that the cake is indelicate. The chiffon is suitably moist and airy, and the layers are as slender as tea sandwiches. In fact, the whole presentation is so chaste, it feels tongue-in-cheek: a couple of whole blackberries and a thin wisp of candied grapefruit peel are the only adornments.

I came up from the cake for a gulp of air and heard the nasal voice of the man at the table next to me fade in like a poorly tuned radio. “When we went to Puerto Vallarta…”

I tuned him out. There was a bite of chiffon cake yet to conquer. It was definitely not for him.

Sip on a Green Parrot while you wait for the slow-cooked veal breast. Save room for the lemon chiffon layer cake.