The Rep’s charming Constellations makes the most of its possibilities 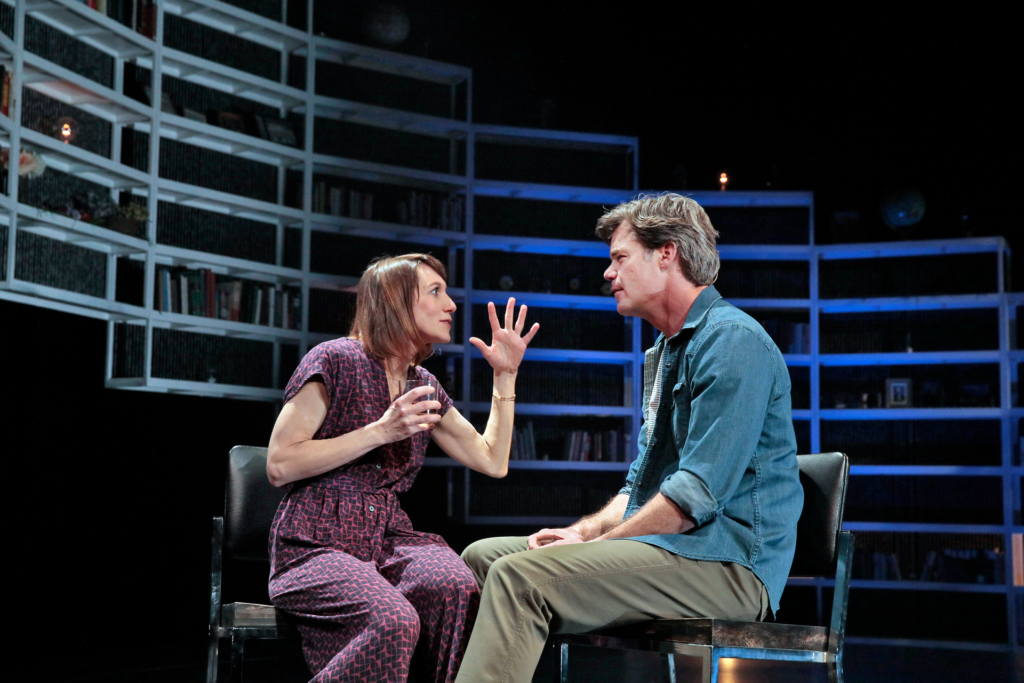 At the outset: Constellations, a romantic one-act by British playwright Nick Payne, is an unmitigated delight with subversive charms.

But I attended the Kansas City Repertory Theatre’s production with some trepidation. Based only on the baseball-card stats, Payne has mixed up a supersolution of literary clichés. Romantic leads with implausibly quirky jobs (she: an anxious astrophysicist; he: a boutique beekeeper). A brilliant scientist with a brain disease. String theory as ontological sermon.

Critics are (mostly) humans, too, with their own irrational pet peeves, and mine is writers who get misty about the metaphorical resonance of quantum mechanics. (Have we moved on from Schrödinger’s cat? I’m unwilling to open the box to find out.)

But Constellations succeeds — soars — in supplanting quirk with quarks and earning every shred of its ample sentimentality.

Chalk part of that success up to the narrative structure, which lands somewhere between a Choose Your Own Adventure book and David Ives’ Sure Thing. The play opens with Marianne (the physicist) and Roland (the beekeeper) meeting and re-meeting at a barbecue in what we assume are parallel universes. In some iterations, Roland is married; in others, Marianne is too fumbling and awkward to catch his eye. And so: The banter stalls, the lights dim, and the actors move back to their original places to start the conversation anew.

That gag is the whole play — over the course of 75 minutes, we see multiple “takes” of a breakup, a reconciliation, a proposal — but it never grows old, thanks to Payne’s singular voice and vision. The script jumps between past and present, muddling the chronology and allowing us to experience time much the way Marianne describes in her lectures. More crucially, the rinse-and-repeat scenes heighten our sensitivity to even small changes in inflection. Payne trains us to hang on every altered line, hunting for the most favorable outcome in a Rolodex of realities.

Vulnerability and wonder seem to be the keys to Marianne and Roland’s romance. In one dead-end scene, Marianne mocks our search for meaning. “We’re just particles governed by a series of very particular laws,” she says. In another, she launches rapturously into the possibilities that even this seemingly reductionist view allows. (Three guesses which take seduces Roland.)

But the bulk of the work falls to the Rep’s excellent two-person cast. Bree Elrod is in her element as Marianne. Her physical work, particularly in the opening scenes, makes us equal parts sympathetic and seasick. She dances her weight from foot to foot, her floppy limbs seeming too large for her body. (Anyone who’s been on a first date will likely recognize themselves — and cringe.) Her vocal work is no less skilled: As a disease takes hold and ties her tongue, Elrod finds more creative paths to the ends of lines. Her frustrated stammers are heartbreaking; we feel, as she must, that the right words are only just out of reach.

Tuc Watkins is preternaturally calm as Roland, who offers Marianne both stability and simplicity. Watkins’ performance is subtle, and it doesn’t always translate to the faraway terrace seats of the Rep’s Copaken Stage. But he proves an ideal foil for Elrod, grounding lofty cosmological insights and preventing high-stakes scenes from orbiting melodrama. A scene in which he proposes (through a book-report recitation of bees’ gruesome mating rituals) is among the play’s most memorable. Watkins’ earnest sing-song delivery makes even penile dismemberment seem quaint.

Although the script’s multiple settings and universes necessitate a black-box, blank-slate approach, scenic designer Jason Sherwood works creatively within those constraints. Sherwood surrounds the circular stage with a curling helix of wire shelves. The effect is not unlike leaves caught in a spiral of wind, making the mathematical order of the natural world visible. Lighting designer Grant Wilcoxen relies on smart shifts in color temperature to separate timelines, and sound designer Andre Pluess evokes a different kind of string theory with weaving chamber compositions.

Payne and the Rep have crafted a spare, almost balletic play about how we stumble sideways into love. But Constellations’ best trick is providing us with an experience at odds with its message. Marianne and Roland may be particles in an infinite multiverse, but we still hunger for one happy ending. Their wins and losses may not matter on a cosmic scale, but we still blow on the dice with a desperate hope.