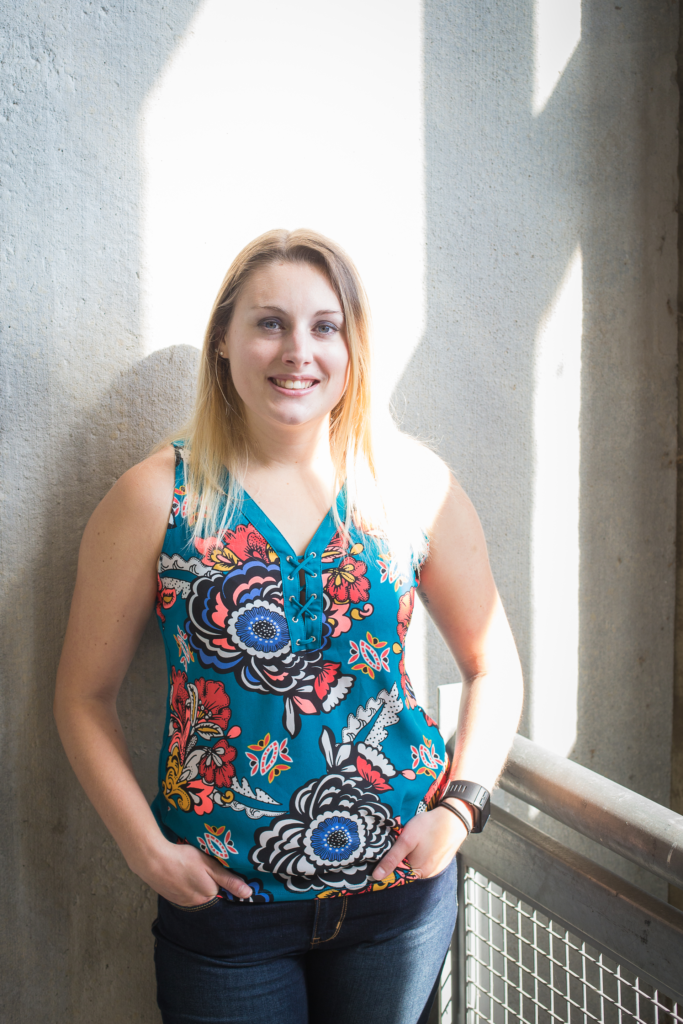 What I do (in 140 characters or less): I’m in sales at a local gym, but I also keep a foot in freelance writing after recently transitioning out of journalism.

What’s your addiction? Caffeine, like every other American. Even if I didn’t need it to get through daily life, I would still drink coffee because I love the taste.

What’s your game? I’m undefeated in people-watching since ’93.

What’s your drink? I’m a Kentucky girl, born and raised, but it took moving out of my home state to really start to appreciate bourbon. A good Old Fashioned is my go-to. (Repeal 18th makes one of the best in the city.)

Where’s dinner? Really any Mexican restaurant, and Kansas City has a ton of good ones. Some of my favorites are Ponak’s, Los Tules, Los Corrals (and its giant margaritas) and El Patron. There’s also this amazing taco place in the Independence Avenue area — I don’t even know the name of it. Or maybe I just want to keep that one secret.

What’s on your KC postcard? There’s an abandoned castle near the 18th and Vine district that I’m in love with. It’s covered in the coolest graffiti, and it’s really a beautiful hidden piece of the city.

Finish these sentences: “Kansas City got it right when …” It welcomed me with open arms. I moved here last year from Detroit, which can be a difficult place to live. I didn’t know a soul here when I arrived, and I didn’t know what to expect. But Kansas City has very quickly become home for me, and I’m amazed at how welcoming and awesome a place it is.

“Kansas City screwed up when …” It decided to put a Joe’s downtown. I’m really not looking forward to gaining 20 pounds. (Just kidding — this was a great idea, and I can’t wait to eat a Z-Man about four times a week when this place opens.)

“Kansas City needs …” More extensive public transportation. I spent a summer in New York City and got spoiled by never having to drive anywhere. Obviously that’s an extreme example, but it will be awesome when Kansas Citians won’t have to rely on paying for an Uber to get to and from downtown, the Plaza and Westport.

“As a kid, I wanted to be …” A sportswriter. I was lucky to live my dream for several years before moving on to other things and seeking out new dreams. I also always wanted to write a book, so maybe that’s next on the agenda.

“In five years, I’ll be …” 29, and hopefully making the world a better place.

“I always laugh at …” That “Why You Always Lying” YouTube video. It came out a couple years ago as a parody of that old R&B song called “Too Close,” and it’s just so outrageous you have to laugh. When the backup dancers come out, I lose it every time.

“I’ve been known to binge watch …” House of Cards and Mad Men. Roger Sterling might be my favorite TV character ever.

“I can’t stop listening to …” I can’t choose one, so I’m just going to say this year’s collection of new rap albums. Jay-Z, Kendrick Lamar, Future, 21 Savage, Ace Hood, Rick Ross and 2 Chainz all released new projects this year, and it’s made for a great year musically.

“My dream concert lineup is ..” Kendrick Lamar (who was incredible at the Sprint Center, by the way), Tupac’s hologram (since we can’t have the real Tupac, I suppose), and Beyoncé.

“I just read …” I’m guilty of reading several books at a time, so I’ll give the last two. One is called Nobody, by Marc Lamont Hill, and it delves into several situations ranging from Ferguson to Flint, and examines the inequality that some of our most vulnerable populations experience. I also just finished Two Hours, which is a book about the quest to find a runner who can finish a marathon in, yes, two hours.

What’s your guiltiest pleasure? Taco Bell. I wish I had something cooler or more local to put here, but nope.

The best advice I ever got: Go your own way. We get stuck in these arbitrary ideas of what it means to be successful, and when we fail to fit inside that box or travel down the typical path, we’re told that we’re not doing it the right way. So being able to redefine my idea of success, and figure out my own way to get there, has been the product of some great advice.

My sidekick? My planner. I bought one of those specialty planners that has each day divided up by the hour, segments for planning your year out, and gridded pages that I can use to plan out my workouts. I don’t really go anywhere without it.

What is your spirit animal? Probably some kind of migratory bird. I don’t like to stay in the same place too long.

Who is your hero? J.K. Rowling. She was truly at rock-bottom in a lot of different ways, then dug herself out by her own sheer will and brilliance. Now, she’s respected across the world, and donates more money to good causes than most of us could hope to ever even make. She also uses her platform to be particularly savage on Twitter against slimy politicians, and I love every second of it.

Who (or what) is your nemesis? Complacency.

What’s your greatest struggle right now? Not being constantly angry at our current political situation. We’re better off turning our anger into passion, which we can then use to make change. But, man, is it hard sometimes.

My favorite toy as a child: Water guns. Easy.

My dating triumph/tragedy: The Kansas City dating scene can be … lackluster, but I wouldn’t consider it tragic. Believe it or not, I think it can be considered a triumph to be happily single in today’s society. We (especially women) are often made to believe that we have to be with someone else in order to have a complete life. But breaking out of that mold and making a complete life for yourself on your own can feel pretty damn good.

My brush with fame: Until this year I was a sportswriter, so I’ve been around a lot of famous people — most of them are much more boring than you would expect. I also once stood in a Starbucks line next to Eva Longoria. (Celebs need $6 lattes, too.)

My soapbox: If you follow me on Twitter, you know I have a few: You don’t have to experience oppression in order to understand it and fight against it. Millennials aren’t ruining/killing everything. Rap music (most of it) is poetry. Work-life balance is one of the most important things you can figure out. Ketchup is bad. Burritos are better than tacos (don’t @ me).

What was the last thing you had to apologize for? As Beyoncé would say, I ain’t sorry. 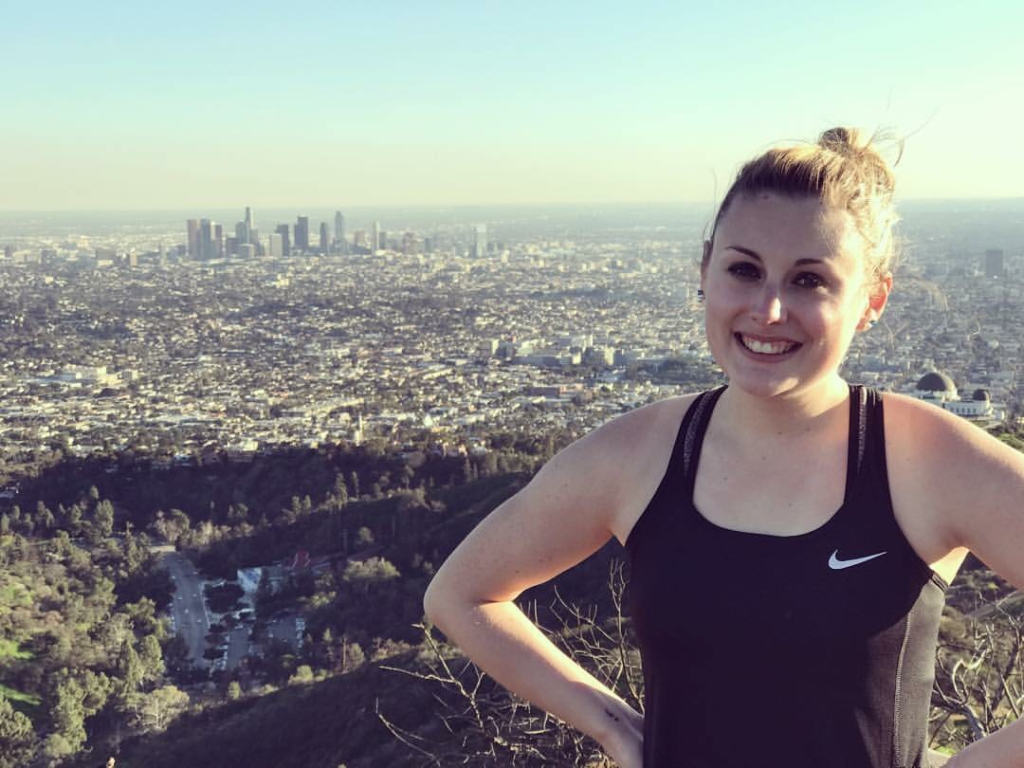 My recent triumph: Earlier this summer, I went to Seattle and ran my first half-marathon. It came less than a year after having hip surgery last summer, so that felt awesome. I’m gunning for the October one here in Kansas City next, so I’ll see you guys out there.