Brunch and ballads for all who enter 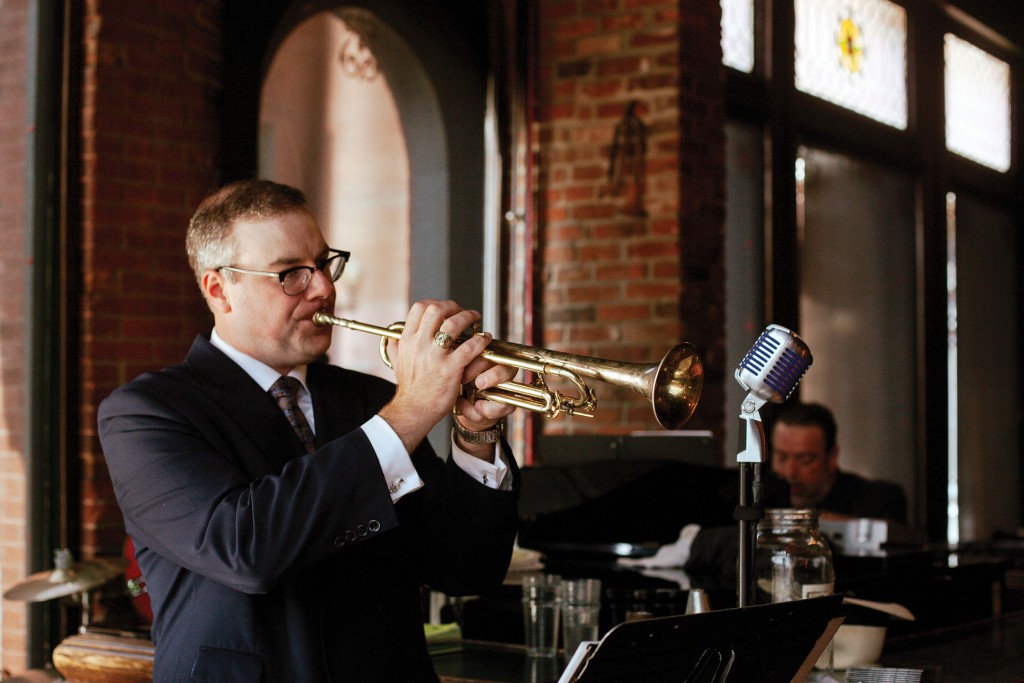 Alex Abramovitz and His Swing’n KC Jazz Band get down during weekend brunch. // Photo by Liz Goodwin

The Phoenix has a history of throwing down.

Although this jazz bar and eatery didn’t come into its current form until 1990, the building’s roots go back another century. It’s been a party spot of sorts for decades, but its modern era is bringing folks together in the name of music, French toast, and signature old fashioneds.

The staple institution draws everyone from grandmothers in their Sunday best, to young couples recovering from a long night (or still in the midst), to families stopping in for music and mimosas. No matter who you are, the staff will treat you like a regular until you become one. 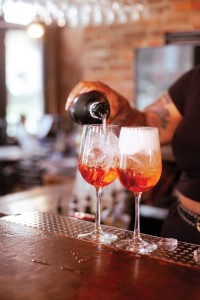 An Aperol spritz is poured during early hours. // Photo by Liz Goodwin

“The staff is really the reason everyone comes back,” says Carisa Lynch, general manager at The Phoenix. “If you don’t have great service, then you have nothing. It’s totally about the experience.”

That’s something that Lynch, affectionately known by her bar nickname as “Cola,” takes to heart. Her jovial laugh and remembrance of your drink order embodies the ethos of the joint: comfort. It’s reflected in both the music and the menu, with an offering for everyone.

The bands vary in genre and overall vibe, bringing in a Broadway-style party and often transporting listeners back to the 1940s with the echo of brass instruments. Regular acts include Tayla Groves, Tim Reid Jr., and Millie Edwards with Dan Sturdevant.

“I want people to come because they love music, they’re comfortable, and they’re having a great time,” says Lynch. “We want to have a good mix because we want it to be an open environment where there is something for everyone.”

The daily menu is an homage to your favorite diner with a few twists, sampling bar staples like sliders and buffalo chicken wraps while venturing into other territories. Lynch’s personal favorite is the Phoenix Mac made with wine and garlic. All of the offerings are fresh to order, and the portions are huge, to put it lightly.

“I wanted it to be a big plate. It’s always been about comfort and sharing,” Lynch says. “Our chicken tender basket, alone, gets people calling us crazy. We want it to be enough to where you take your time and, of course, get some leftovers to bring back with you.”

If you find yourself lucky enough to get a table for weekend brunch, you’ll see similar stick-to-your-ribs dishes like chicken and waffles, biscuits and gravy, and even a crab cake benedict concoction.

The breakfast fare has brought in an explosion of foot traffic. Some brunch-goers even like to join in on vocals between nibbles, singing everything from Ed Sheeran to Billy Joel.

“I mean Sunday brunch truly is crazy,” Lynch says. “It’s really just a huge party. People ask why we can’t take reservations, but we literally can’t. We are packed.” 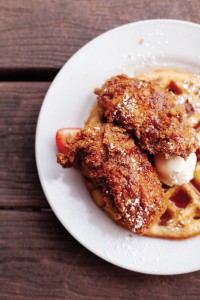 The Chicken and Waffles is one of the many comforting dishes on the menu during The Phoenix’s weekend menu. // Photo by Liz Goodwin

The cocktail offerings make the restaurant a triple threat. They’re revered for their old fashioned, as they make their own orange oleo-saccharum by the bucket full and torch the orange peel before garnishing to open up the citrus pores and let the liquid gold seep out.

At the heart of this historic venue, Lynch and her team want The Phoenix to be an open door for the hungry, thirsty, and musically-inclined. Locals and out-of-towners are called in for a celebration at this jazz joint on the corner of 8th and Central, and they will leave with their ears and stomachs satisfied.

The Phoenix is located at 302 W 8th St. Kansas City, MO 64105. They are open for “live jazz” brunch Saturday and Sunday from 10 a.m. – 2 p.m. Please visit their website for info on regular weekday and dinner hours.