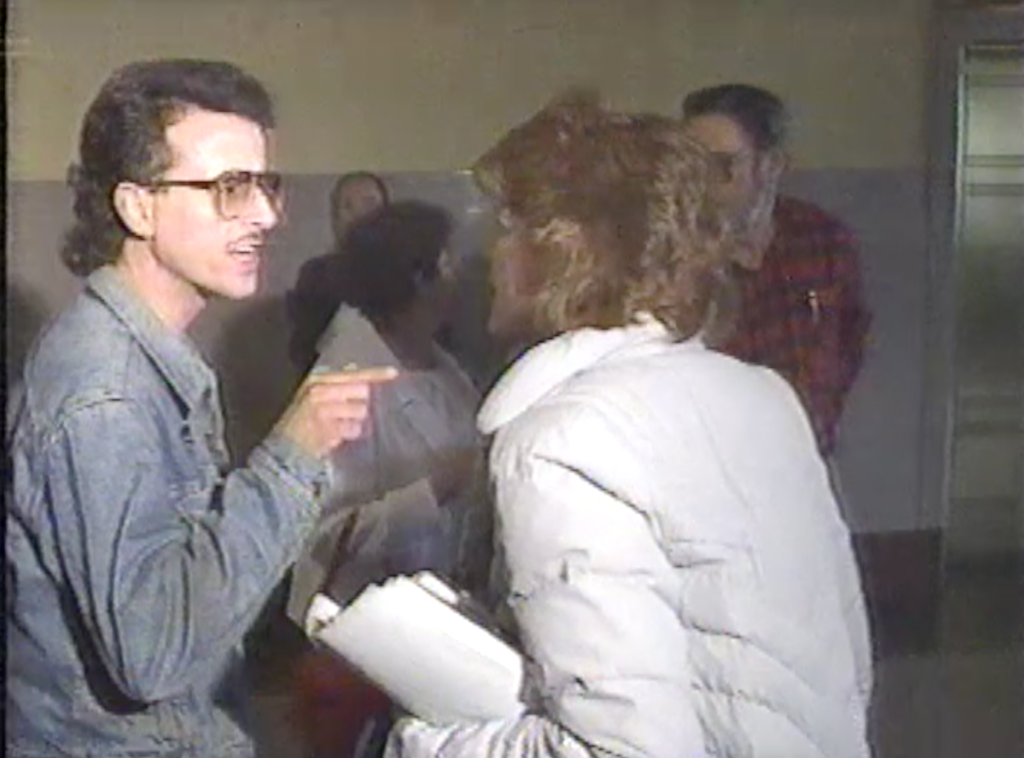 Since 1993, it has been illegal to discriminate against LGBTQ and HIV-positive Kansas Citians when it comes to housing, employment, or public accommodations.

It’s a simple idea, but making that ordinance a reality was another matter.

“We shook our hands and said, ‘We’ll get this done in six months,’” recalls David A. Weeda, the cofounder and former executive of KC’s Human Rights Project. “Of course, that was not the case. At the time, I didn’t think that it would take three and a half years.”

A quarter century later, it’s easy to forget how contentious the fight for the ordinance was. Austin Williams, who originally hails from Raytown, has just completed a new documentary, The Ordinance Project, that captures both the struggle and the ultimate success of the movement. It’s the opening night selection for Out Here Now: The Kansas City LGBT Film Festival at the Tivoli this Thursday at 7:00 p.m. Tickets are $10.

Williams is a UMKC doctoral candidate and an adjunct history instructor whose previous experience behind a camera was making music videos for his band.

“If you had talked to me three years ago and said, ‘You’ll be premiering a documentary at the LGBT Film Festival’ — first of all, I would have said, ‘How would I make a documentary?’” Williams tells The Pitch. “The second thing I would say is, ‘Why the LGBT Film Festival?’ I did not see myself becoming a champion of gay rights. It’s more just that it’s become an issue I just couldn’t ignore.”

Williams, who’s straight, calls the three-year battle the most controversial legislative fight in Cowtown history. Before the city council approved it 8-0 (with five abstentions), keeping a job or a roof over one’s head was a constant struggle.

Activist Keith Spare, who’s featured in the film, remembers by phone: “At a time when I very much needed a job, I was hired by Catholic Charities. After being accepted for the job, I got a call that said, ‘We found no less than three articles about you being openly gay in the Kansas City Star.’ My response was, ‘You didn’t look very hard. There’s several more.’ Because of that, I was not hired.”

These were not isolated incidents.

Weeda and other activists spent years dealing with misconceptions about what it means to be gay or lesbian — and how AIDS is contracted or can be treated.

“You have to remember — we didn’t know what caused HIV,” says fellow activist Keith Spare. “It wasn’t known that it was a blood- and body-fluids-borne disease. So, if a typewriter or a wheelchair was touched by a gay person, they just gave it away. They didn’t want anything to do with it.”

Veteran LGBTQ activist Lea Hopkins recalls that she and her girlfriend appeared in a cover story about the ordinance in the Sunday edition of the Kansas City Star and were the only ones who used their real names. They had the advantage of owning their home and being self-employed.

“The gay community was so excited, and then as it set in that this [newspaper story] was going to happen, all of a sudden a lot of gays in the community said, ‘I’m not ready to do that yet,’” says Hopkins.

Spare adds, “Nobody in those [LGBT and AIDS] organizations was known to anybody else, except for one or two people, by their real name. They all had pseudonyms. We were schooled by our brothers. ‘Don’t give out your real name. You’ll be sorry.’ I can’t remember what names I used. But eventually I got tired of that.” 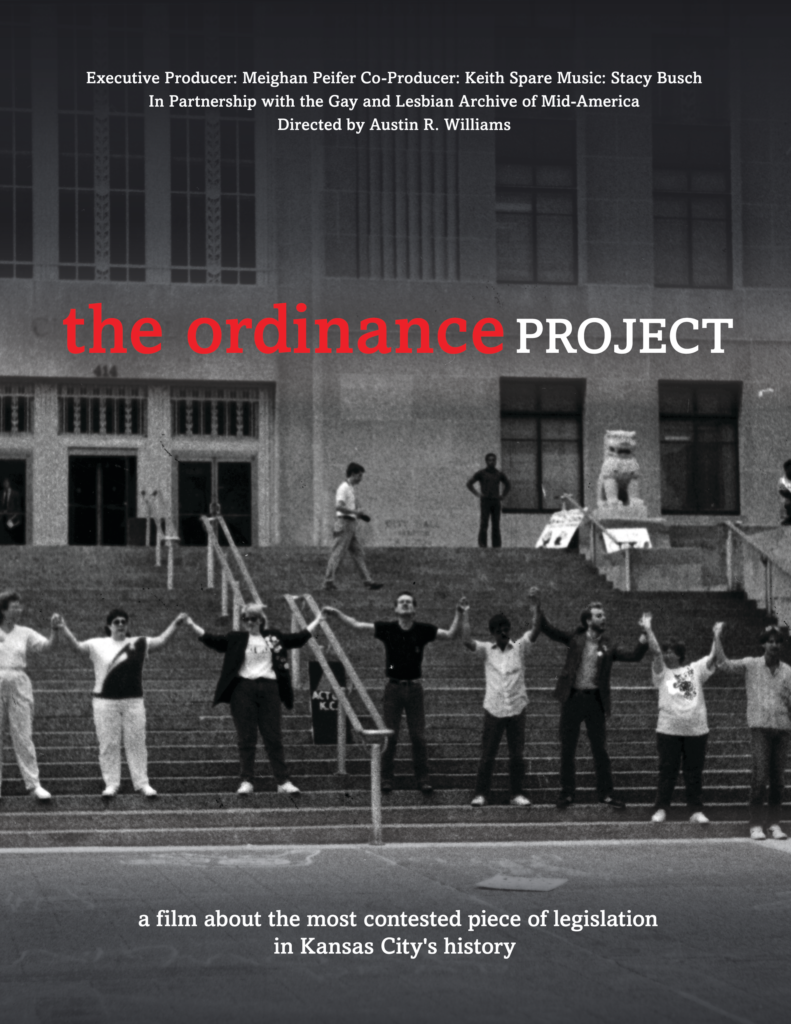 The struggle over the ordinance at one point attracted nearly 1,500 people to protest at the J.C. Nichols Fountain. Reverend Fred Phelps and Westboro Baptist Church came to picket, as did singer Orange Juice Queen and anti-gay activist Anita Bryant. Though the ordinance ultimately passed because of advocates like Weeda, Hopkins, and Spare (as well as cooperative politicians) it also got an ironic assist from anti-gay personalities like Phelps and Bryant.

“When Anita Bryant came, it started it all over again, because that was national,” says Hopkins. “We sent out press releases, and nobody would show up. When Fred started his insane — whatever that was — I said, ‘Leave Fred Phelps alone, because when he shows up, everybody shows up.’”

“They always said that when you send out the press releases out to the media, be sure to send out one to Westboro Baptist Church,” adds Weeda.

In the film, Williams talked with surviving activists and politicians like Rep. Emmanuel Cleaver, who became Kansas City’s mayor when the ordinance finally passed. The rookie filmmaker says he’s grateful to UMKC’s extensive LGBTQ archive and to the fact that activists used their VCRs to tape broadcasts of City Hall meetings because the original footage was nowhere to be found. He recalls going through 70 hours of raw footage, and when he talked with The Pitch, he was whittling his 7-hour cut down to less than two.

“[Williams] interviewed me in Maine, which was really wonderful,” Weeda says. “He came in January of 2017. We snowshoed down the driveway. I was opening boxes that had been sealed since I left Kansas City in 1999. I had so many audio cassette tapes of my testimony and the cassette tape from my answering machine. Austin was listening to hate messages that someone left on my phone. He has all of those.”

The documentary is only the start for Williams. He also wants to write a companion volume and prepare a website of his research for the benefit of other historians. He’s not taking his task lightly.

“These people have been describing a world that was totally foreign to me,” Williams says. “I almost felt ashamed that I didn’t know that this took place.”

He also notes that his film is part of an ongoing cultural effort, ticking off recent events that illuminate how these issues aren’t fully settled: “The cake baker case with the Supreme Court, the anti-discrimination ordinance that just passed in Wyandotte County, the talk from the Trump Administration about banning trans people in the military … Before I’m a filmmaker, I’m a historian, and I’m trying to provide context so that anyone wanting to fight for civil rights going forward can understand where we came from.”

The Ordinance Project screens at Out Here Now: The Kansas City LGBT Film Festival, this Thursday at 7:00 p.m. Tickets are $10. For more information, go to https://www.outherenow.com/ordinancepremiere.