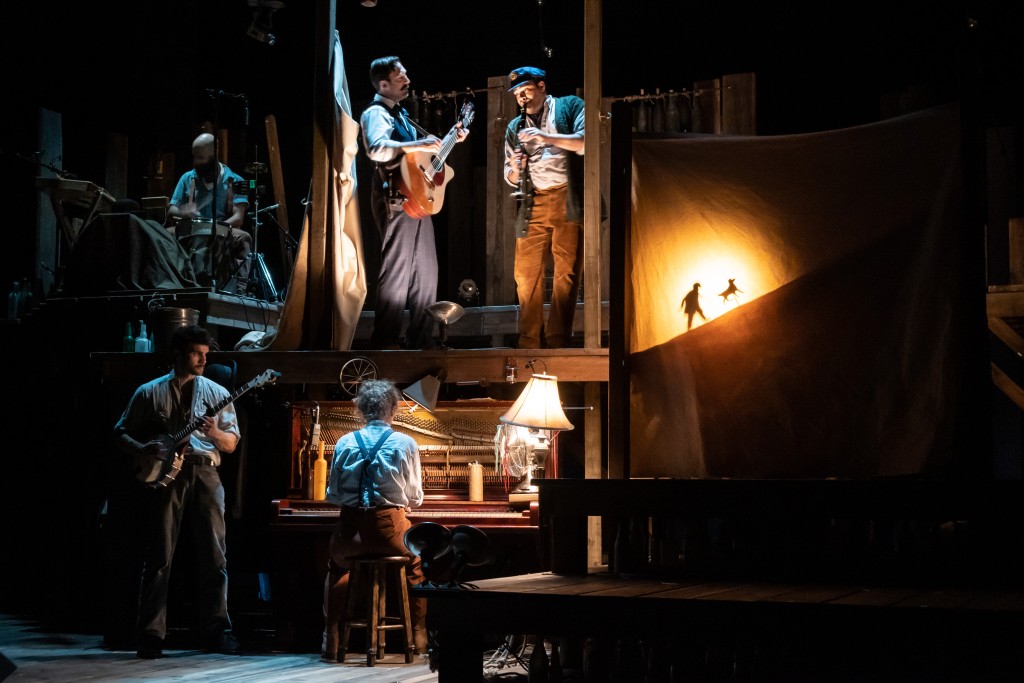 I miss feeling a sense of wonder.

A return to concerts and theater has meant a return to seeing live production, sure, but oft times this means a return to the most limited version of what can be promised and then delivered upon. That is to say: uncomplicated.

In that way, The Old Man and the Old Moon is the first production of the “post”-pandemic era to bring me back to a sense of local spectacle. Sure, there are touring productions of off-Broadway musicals hitting the Starlight, but there’s nothing like what the KC Rep is putting on anywhere to be found. 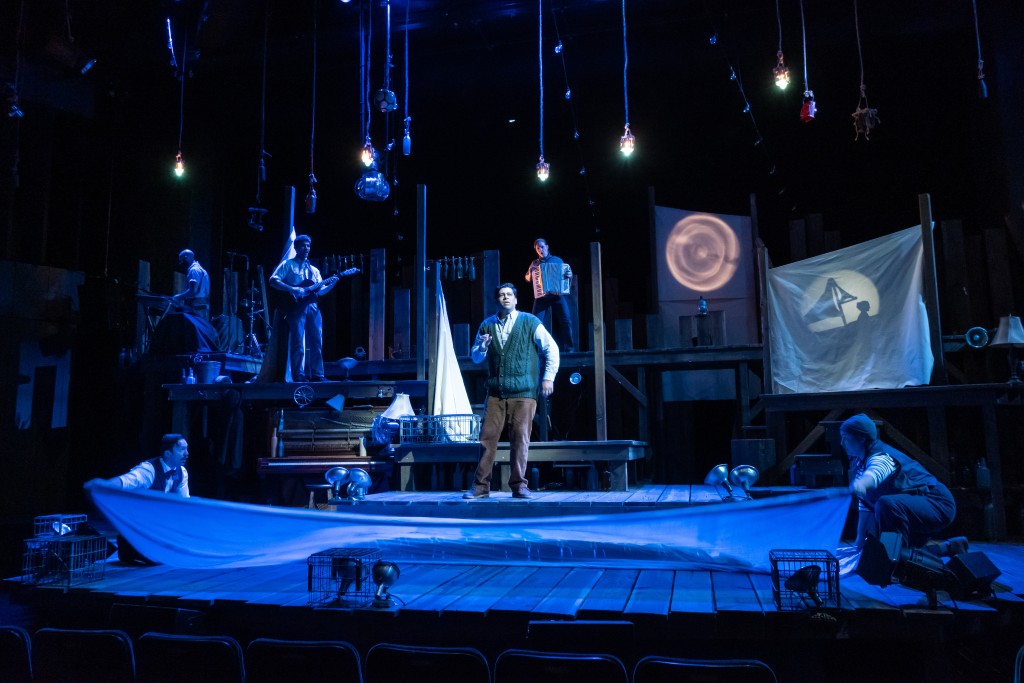 The Old Man and the Old Moon is an Americana fable wrapped in the trappings of a sailor’s tall tale. A story about the man who keeps the moon filled with light, night after night, becomes an allegory about marriage, love, self-love, society, and so much more.

The story of this production is perhaps the least important part of this production. That’s not to say that it isn’t deeply stirring. That’s just to bring up how much the rest of the show’s elements absolutely slap. 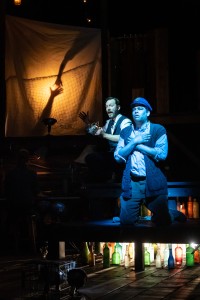 The production design on display here is out of this world. Quite literally.

Backlight segments accomplish everything from an actual opening credits sequence for a stage play, up to demonstrating how humans can control the heavens. Truly stellar, inventive work, atop a foundation propped up by the power of visible, manifest, sheer belief.

Old Man is the kind of show with indie ingenuity that I could tell, from the first promo photos I saw, would hit me right in my Michel Gondry heart-spot. I was ready for that. What I wasn’t ready for was how hard KC would go in the paint.

Artistic Director Stuart Carden’s signature work is indeed the kind of artistic achievement you scrawl your name into with all your might. Liz Chidester, Anand Nagraj, Ashley Pankow, Cody Proctor, Edward Rosini, Jake Saleh, and Marisa B. Tejeda combine to deliver perhaps the greatest collaborative cast I’ve ever seen on stage, in terms of sheer, sheer, talent.

[Of note: Ashley Pankow has the charm of a haunted doll IN THE BEST WAY I MEAN THIS AS A COMPLIMENT, and Edward Rosini was done a disservice by not being born in the U.K. where he would have certainly fronted a BBC sketch show.]

The Old Man and the Old Moon as a tale of emotional human origin, responsibility, and the stagnation of relationships is fine. A perfectly serviceable story that audiences of all ages can, and should, enjoy. The reason this is a must-attend is what the cast brings to the table. 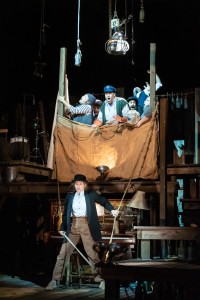 The Old Man and the Old Moon is… a musical. Ostensibly? It does a sleight of hand that I wish more musicals would dabble in, wherein the songs serve to forward a story but only insofar as they complement and transition. And nothing more. No song in this show feels longer than 90 seconds. Some certainly are, but in experience, it feels like the audience is gifted a second chorus in a song on only a few limited moments.

It’s a musical that never wants to call attention to the fact that it is a musical. There are songs I adored from it, and not a single one I would point to as being that song in the way that musical theater demands.

What happens in the transitory nature of this musical performance is that you get a sort of constant harmony of existence from start to finish. This isn’t a musical and yet it is a film-length song, which simply revolves around a central theme.

The ability to pull this off is rooted in the uncanny ability of the players herein. Each member of the cast of a multi-instrumentalist atop all else that they bring to the table. It is only to become expected, at some point, that an actress would be both engaging in a sword duel while also dictating the experience by banging out honkey tonk piano. It would almost be untoward if the lead actor did not, in a moment of extreme self-reflexive misery, step away to pick up a woodwind instrument that would better manifest his sorrow than the human tongue.

It’s just annoyingly impressive. It makes this difficult, to sum up for a show with such a limited remaining run.

You should go see The Old Man and the Old Moon if you are able, ASAP. But as much as I adored my time with it, TOMatOM is aligned with the back-projected imagery within its production. The show itself is delightful but mostly unmemorable—in content. In execution, it is perhaps the finest thing I’ve seen on stage in Kansas City since moving here from Los Angeles.

The combination of this creative team with this neigh unholy level of skill on display from a cast—look, just put these same people in every show that you can, and The Pitch will show up.

We would see this team do Suessical. Yes. That’s how much we believe in them. [Please never hold us to this.]

It’s been a long while since we’ve seen talent on a stage far, far outmatch the material. Now we would like to see them do the same with all materials. But until then, you have the option to dip in on a simply transcendent stage production. Get out there now.

Sometimes it takes shifting sea-shanties to see the shifts within yourself.

The Old Man and the Old Moon runs through May 22. 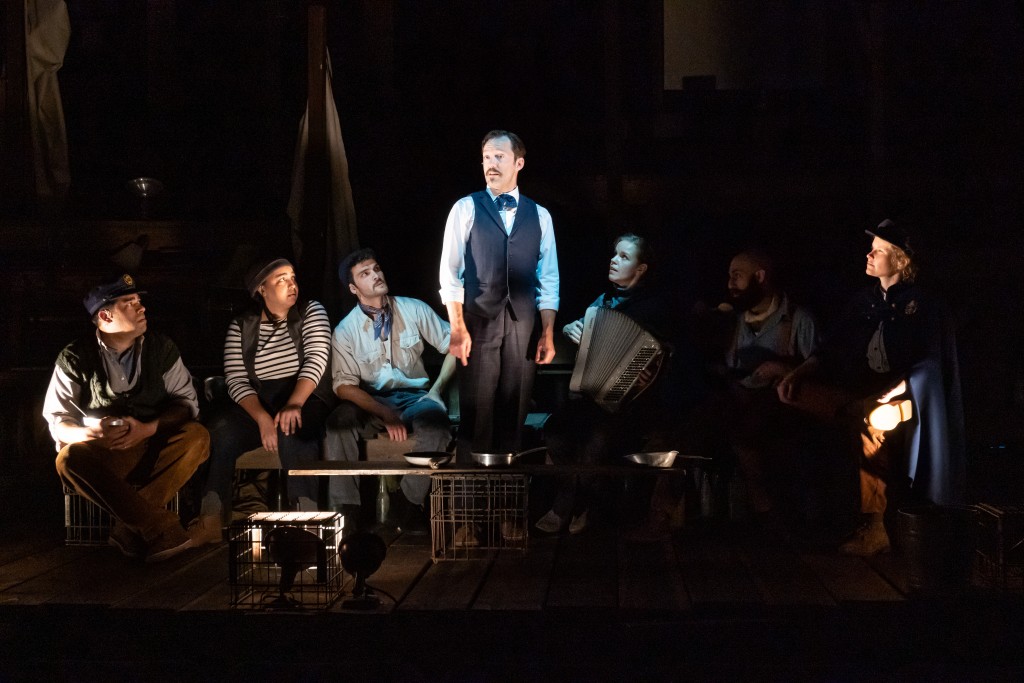