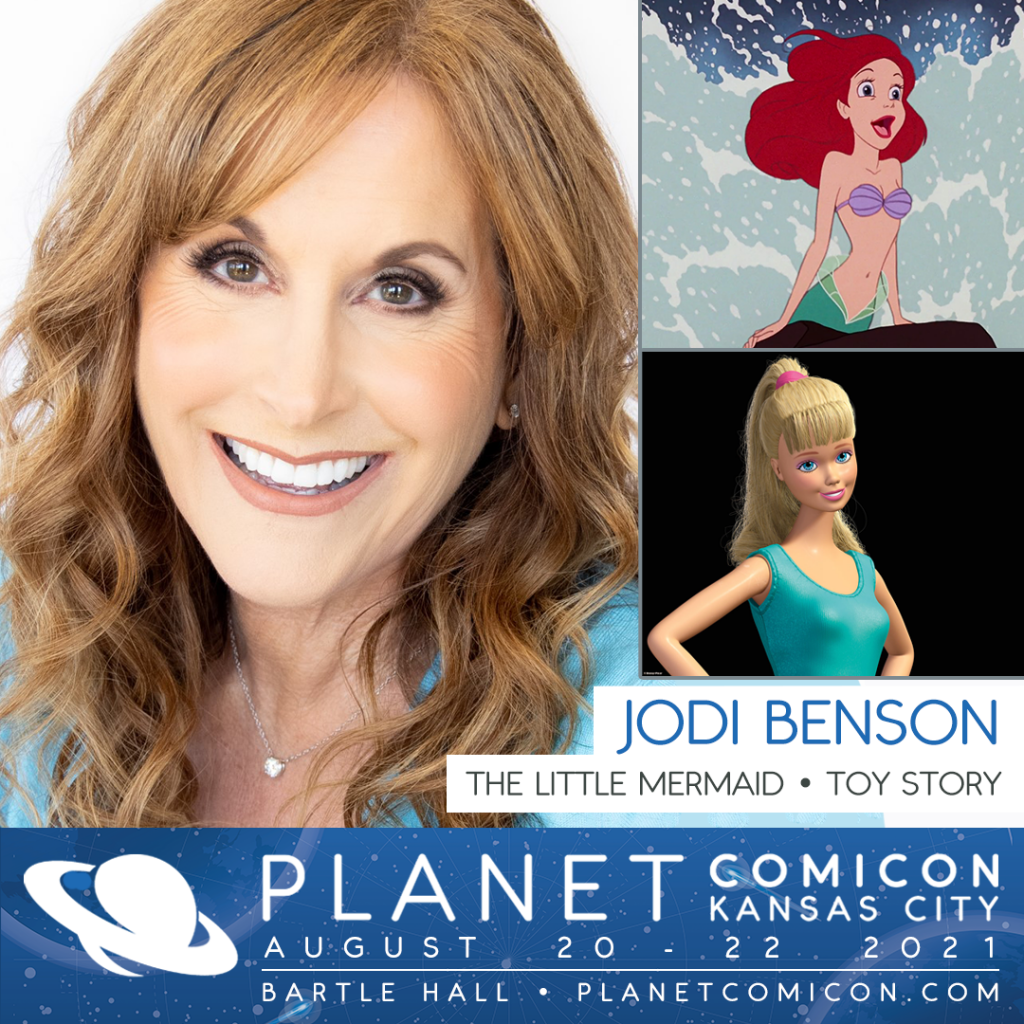 Because Jodi Benson first rose to prominence as the title character in The Little Mermaid, it’s a little surprising that she has to book flights like everyone else. Sadly, she can’t swim to Kansas City for Planet Comicon at Bartle Hall from August 20 to 22, and Cinderella’s pumpkin coach is out for repairs.

In the real world, Benson is a Tony nominee for Crazy for You and has also provided the voice of Barbie in the Toy Story series and the title character in Don Bluth’s Thumbelina. In real life, Benson may not be a Disney Princess, but the Mouse House has awarded her the title for Disney Legend.

Fellow honorees include Ub Iwerks who designed Mickey Mouse and animated his first cartoons, Julie Andrews, Robert Downey, Jr., and the late Howard Ashman, who died of complications from AIDS. While Ashman’s lyrics were also featured in Beauty and the Beast and Aladdin, The Little Mermaid was the last project completed while Ashman was still living.

Over the phone, Benson sounded eager to visit the city where Uncle Walt and Iwerks started the Disney legacy.

The Pitch: You became a Disney legend, in part because you had collaborated with Howard Ashman on what had been a Broadway flop, the musical adaptation of Michael Ritchie’s beauty pageant satire, Smile.

The next thing you two did next was a hit.

That’s just a huge gift from God, a huge blessing. Had the show been successful and run, I don’t know necessarily that Howard would have invited us girls to audition for it. Because the show closed so quickly, he opened the door for five or six of us to audition for The Little Mermaid. That was a wonderful surprise that came out of a difficult season.

As a writer, I am intimidated by Ashman’s work. His couplets are perfect, and he used fifty-cent words like “expectorating.” Was it tough to sing them?

Obviously, he was a genius. His lyrics are by far the best for sure. Because I had him right there with me and because I had just done Smile with him, it was something I was comfortable and familiar with. Because I’m a big fan of his, getting to sing his lyrics is such a treat. He has really specific ways that he likes things to be handled and how he likes certain words to be pronounced, spoken, or sung. It was wonderful to have him right there next to me.

I’m very grateful for the experiences I had with Howard. I feel very fortunate that I got the opportunity to work with him on not one project but two.

Howard did not have a part in the selection for me. It was the powers that be at Disney who listened to the tapes but didn’t know what they wanted until they heard them. When they heard me, they said, “Yes, that’s Ariel.” Of course, Howard was thrilled because that really wasn’t part of his position for casting. He was thrilled because we had worked together for a good two-and-a-half, three years with Smile, so that was a wonderful treat.

I’ve interviewed Mr. Menken. He told me he writes ranged melodies that were challenging to sing. Was that your experience?

For me personally, Alan’s melodies are comfortable. I did not necessarily find them challenging or difficult. Again because I’m a huge fan of his, anytime you’re working with somebody that you admire tremendously, it makes your job so much sweeter and more comfortable across the board.

Sci-fi novelist and cultural critic Lindsay Ellis persuasively argues that Ariel is not an anti-feminist character because she’s pursuing her independence from her father, King Triton (Kenneth Mars) by perusing Prince Eric (Christopher Daniel Barnes). She’s taking on her own destiny.

There are a lot of ways to look at it, but you have to remember that the last classic Disney princess was Sleeping Beauty in 1959, and then we jump to 1989. So, we have this huge period of time that goes by.

You have to realize where Ariel brought us in ‘89 was a huge jump between Snow White, Sleeping Beauty, and Cinderella.

The other thing about Ariel is that her greatest desire is to reach outside the box and to reach out for something that’s bigger than her and beyond. She’s fallen in love with the human world and is curious, so that’s where we really start the film. Her “I Want” song, it’s not for a person; it’s for an experience. And when she sees Eric, he’s part of that wish and that wish and that dream for her to pursue a different environment and a different experience.

And she saves him because she’s fallen in love with the human world. She thinks it’s fascinating. She doesn’t see the dangerous side like her father does. When you start with that perspective, it gives it a lot more clarity. Her hopes and wishes aren’t necessarily wrapped around Eric.

She’s different from Aurora in Sleeping Beauty because everything sort of just happens to Aurora whereas all of The Little Mermaid revolves around Ariel’s decisions, good or bad.

You also got to play the purloined voice of Ariel. When Ursula the Sea Witch commandeered it. Did you do anything different when you were playing that side of her?

When playing Vanessa, I just used Pat (Carroll) as my guide track. My job was to recreate her cackle and to take where she had gone with Ursula and do it with my own voice. I had a really wonderful time geeting to work with Pat and study her. That’s what Howard and the directors (John Musker and Ron Clements) wanted.

With Wreck-It Ralph, we have her joining forces with all the other princesses, but her personality is essentially the same. She has a fiery personality. She can be a bit rebellious, slightly disobedient at times (laughs). As long as we’re still maintaining that from the original, we’re good.

Anime fans at Planet Comicon will probably be delighted that you were in the English dub of Hayao Miyazaki’s Nausicaä of the Valley of the Winds.

I honestly do not remember that project. I was just asked about that recently. You know what? I cannot recall my recording sessions on that project. I won’t be able to comment on it. I have a “BC, before children” brain, and I home-schooled my kids for 17 years, so I lost some of those intricate memories of some work projects. For some reason, for that one, I do not remember.

Millions have grown up with Barbie. Was it intimidating to assume her legacy?

When I started work on Toy Story 2 and I went to work on the first day, there was a representative from Mattel there saying it was a monumental day. It was the first time in history that Barbie was having a voice.

I had to kind of gently correct him and say actually I voiced the workout videos in 1989, which they didn’t realize. I had actually done Barbie’s voice before. We really worked on making sure that she was intelligent and bright and authentic and not like a caricature. That’s what we worked hard on with, the director, the producers, and myself; just trying to make her as real as possible.

It was fun to hear you interact with Micheal Keaton’s Ken in Toy Story 3. They have an amusingly co-dependent relationship in that film.

I think it’s a little bit of a give-and-take. Obviously, there’s a lot going on with Barbie personally with her feelings toward Ken, and we see that in the evolution of everything that she goes through with him. That’s what makes that relationship fun. It’s playful, but there’s a little bit of a back story going on.

You started off singing and dancing on stage, and you’ve been on camera in Enchanted. You also received a Tony nomination for Crazy for You. Why do you think voice work has been your strong suit?

When you hit with a project like The Little Mermaid, it’s life-changing, and I love it. I absolutely love being behind the microphone, so it’s never been a negative thing or felt like it was restrictive. I can still pursue other aspects of my career, and it all kind of blends together.

I read an article where Tom Hanks admitted that while he’s good at doing voice work, he lamented that he didn’t get to use his body as much.

I don’t necessarily feel that way because I have been doing it for 35, 36 years. I’m very comfortable with using my whole physicality when I’m in the recording studio. I’m not stationary when I’m working. I’m moving. I’m as if I’m on stage or in live-action. It really hasn’t changed for me that way. For me, I don’t have that loss.

I don’t know how other actors would do that sitting in a chair, stationary, five days in a row of eight-hour days. You’re going to take your breaks and move around. I’m always up and physically active. As long as I don’t create too much air on the mic and I don’t touch the mic, we’re good to go.

Yes, because as a Disney Legend, you’ll be coming to where the entire Disney legacy started.

I was supposed to come to Kansas City last year, but then COVID hit, so I’m looking forward to it. I just had my first in-person event in Raleigh. It was a big adjustment to be in that large group of people. We’re doing our best to be safe and healthy and hoping we can get a few more of these events under our belts before things go crazy again. I’m grateful to be there at the end of the month.